‘I want more’: Steven Gerrard already ‘thinking about what’s next’ for Rangers after title triumph

‘This is a journey that is not finished… I want more’: Steven Gerrard says he is already ‘thinking about what’s next’ for Rangers after ending title drought

Steven Gerrard savoured his first title as Rangers manager and insisted it was only the beginning.

The Ibrox side’s victory over St Mirren coupled with Celtic’s draw away to Dundee United confirmed the Light Blues’ first major trophy in a decade.

Over the line while unbeaten and still with six matches to play, Gerrard confounded expectations of a nail-biting finale to the campaign by taking the club to its 55th title in the first week of March.

And on Sunday night the jubilant Rangers boss, who had previously endured two seasons without a trophy, savoured the moment but was already looking towards presiding over a period of prolonged success with the Glasgow giants.

‘It is very difficult to put into words right now,’ he said. ‘I’m on a real, emotional high and it has been a journey that is not finished.

‘There is more to come and the next thing for me, when you win, it is always about what is next. I am so proud of the players first and foremost — they are the most important people inside the club.

‘I always said the first one would be the hardest. But I am hungry for more and I hope my players share that with me. If they do then it is exciting times to be a Rangers fan. 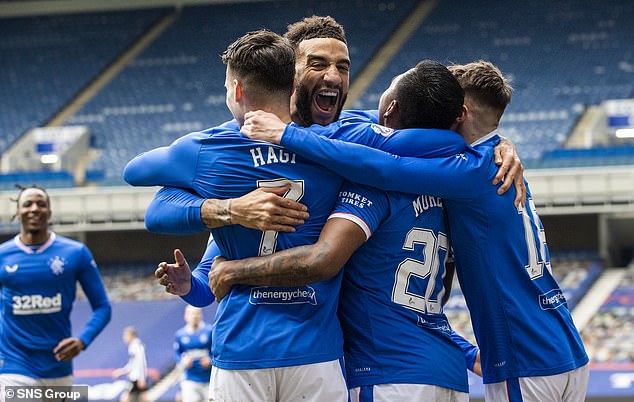 ‘For me the priority is to let this sink in and to realise the monumental achievement that it is. But that has got to make you hungry for more. I’m already thinking about what is next. I want more and that is my drive every single day.

‘Since I’ve been a young lad all I want to do is win and win football matches. I want to have moments like that in the dressing room. That is what it is all about.’

Victory over the Buddies on Saturday all but ensured Rangers were champions, with the final whistle sparking wild celebrations among the players.

‘I don’t think while I’m representing this club there will ever be a bigger three points,’ Gerrard reflected. ‘It was an emotional day, arriving at Ibrox and seeing the scenes. It was an incredible feeling.

‘This club has been to hell and back for the past ten years. I have only been a part of it for three but I can certainly relate and I have that affection with the fans.’

Gerrard took charge in 2018 with Celtic already seven-times champions and Rangers unable to finish third in the table.

Reflecting on the two seasons that brought progress but not the silverware the fans craved, he added: ‘My main priority was to connect everyone at the club, from the board to the team and everyone around us.

‘We have some incredible people here that work for this football club.

‘I have to mention players who have come and gone and helped the process. Rangers fans like Andy Halliday — I need to name check him. Everyone has played their part and we won’t forget them.

‘But now it is all about the supporters. They have been through enough and this is their time. And I am just really proud to have played my part in that.’

Although completing the league campaign while unbeaten is now an obvious goal, Rangers’ minds will soon turn to the Scottish Cup and, more immediately, the Europa League, ahead of their last 16 away leg with Slavia Prague on Thursday.

‘We have to focus because there are a lot of big games to come and we want more,’ Gerrard stressed.

‘We need to enjoy this and get ourselves ready for the next challenge. Glasgow Rangers is about winning and we all live under that pressure, and that responsibility, but it is about what is next and it is about me getting these players ready for what is next.

‘I want to get into the last eight of the Europa League and that is the next challenge.’

The matches with the Czechs will come too soon for skipper James Tavernier to make his return after sustaining a knee injury away to Royal Antwerp but Gerrard revealed there is a possibility of him returning to action at Celtic Park in a fortnight.

‘He’s got an outside chance,’ added he manager. ‘Obviously depending on what happens from now to that game will depend on whether he’s selected or not.

‘But what I will say is that young Nathan Patterson, after a difficult week and a huge mistake that he made, has been absolutely fantastic in terms of his performances.’