Three Tory defectors faced a backlash last night as one of them threatened to destroy the Conservative Party.

The trio announced their bombshell resignations just as Theresa May prepared to enter a critical period that will determine whether she gets her Brexit deal over the line.

Asked if she could envisage returning to the Tories in future, Heidi Allen suggested they wanted to supplant their former party

In an extraordinary press conference, the rebels alleged that the Conservative Party had been taken over from ‘top to toe’ by hard-Right Brexit extremists.

They accused the Prime Minister of a ‘dismal failure’ to stand up to a ‘Purple Momentum’ or ‘Blukip’ movement they said had infiltrated and taken hold of the party. Asked if she could envisage returning to the Tories in future, Mrs Allen suggested they wanted to supplant their former party.

She replied: ‘I can’t imagine it, I just can’t. Not least because, if we do our jobs right, there won’t be a Tory party to go back to.’

The defections were timed for maximum impact, less than an hour before Mrs May appeared in the Commons for Prime Minister’s Questions and just a few hours before she flew to Brussels for the latest round of last-ditch negotiations with the EU.

Last night, the three rebels faced criticism for claiming they were being pushed out by anti-EU ‘entryists’ and the threat of de-selection, when they were choosing to turn their backs on the Tory manifesto they stood on just two years ago, which pledged to honour the result of the Brexit referendum.

Critics also pointed out that their departure had handed a gift to Jeremy Corbyn as he fights his own battle to keep the Labour Party together. 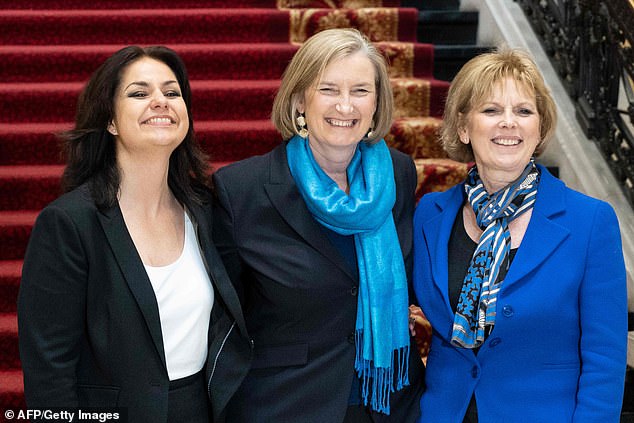 Simon Hoare, the Tory MP for North Dorset, said: ‘It’s another distraction from what is the main game in town, which is extricating Britain from the EU with a good deal. Everything else is a sideshow. I am sad at these departures because I believe in a broad church Conservative Party, but I don’t accept their description of the party that they have put forward today.’

However, the trio of former Tories –who dubbed themselves the ‘three amigos’ yesterday – claimed there were a ‘significant’ number of MPs ready to follow them out of the door.

Their defections to The Independent Group are part of what is becoming the biggest shake-up of British politics for a generation. The group now has the same number of MPs as the Liberal Democrat party and one more than the Democratic Unionist Party (DUP). On another extraordinary day: 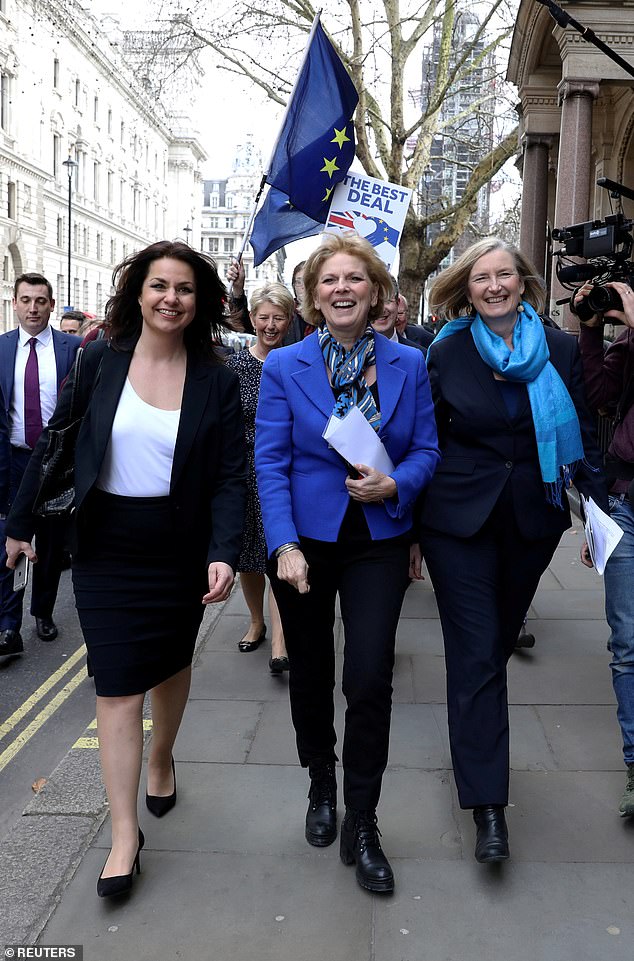 – David Cameron issued a statement hinting at his fears the Tory party could fracture over Europe and saying ‘everyone’ must ensure that it could continue to accommodate different views;

– The new Independent Group surged to third place in the polls just three days after its launch;

– Jeremy Corbyn was accused of a ‘stalinist’ response to MPs quitting Labour as he faced the threat of a fresh raft of resignations from party moderates;

– Derek Hatton was suspended from Labour just days after being welcomed back;

– George Galloway dismissed Labour’s anti-Semitism row as a ‘lie’ as he applied to rejoin the party;

– Labour looks set to lose control of a city council after one if its councillors defected to the Tories over anti-Semitism;

– Mrs May defied the departures of the three, insisting she had made ‘progress’ on the Brexit backstop. Miss Soubry, Dr Wollaston and Mrs Allen announced their decision to leave in a letter to the Prime Minister shortly after 11am. They wrote: ‘We no longer feel we can remain in the Party of a Government whose policies and priorities are so firmly in the grip of the ERG (European Research Group) and DUP. Brexit has re-defined the Conservative Party – undoing all the efforts to modernise it.’

At a press conference later, Miss Soubry said the battle for the Conservative Party was ‘over’ and the hard-Right Brexit extremists had won.

She appealed to ‘fellow one nation Conservatives’ and ‘like-minded Lib Dems’ to ‘please, come and join us’.

Mrs May last night said she was ‘saddened’ by their decision to leave, but she stressed the importance of sticking to her promise to respect the Brexit result.

In Brussels, she said: ‘I’m determined that under my leadership the Conservative Party will offer the decent, moderate and patriotic politics that I believe the people of the UK deserve.’

On a visit to Berlin, Foreign Secretary Jeremy Hunt said: ‘These are extremely talented people and I hope that one day we will be able to welcome them back into the Conservative family.’