Senate Republican Leader Mitch McConnell said on Monday he would have ‘no choice’ but to take up the impeachment of Donald Trump if the House votes to charge the president. 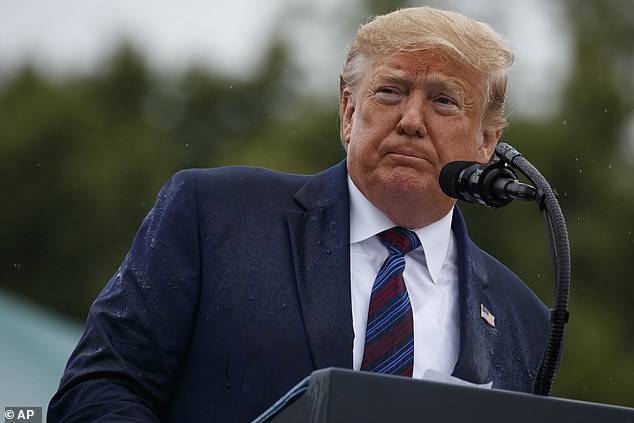 If the House votes in favor of articles of impeachment, the trial of President Trump would be held in the Senate and be presided over by the Chief Justice of the Supreme Court

There had been speculation that McConnell, a Trump ally, would try to delay a trial until after the election.

He’s played tough politics before, most famously in the 2016 election when he refused to grant then-President Barack Obama’s Supreme Court nominee, Merrick Garland, a vote in the Senate.

But McConnell said he would not try to change the Senate’s rules on impeachment, pointing out it would take 67 votes – a high bar unlikely to be met – in order for that to happen.

‘No, the Senate impeachment rules are very clear,’ he said.

But McConnell also refused to address a question about President Trump’s tweet storm over the weekend and into Monday where the president said House Intelligence Committee Chairman Adam Schiff, who is leading the impeachment inquiry, should be arrested for ‘treason’ and warned Democrats could cause a ‘civil war’ with their inquiry.

‘What I want to do is spend our time accomplishing things for the American people,’ McConnell responded.

McConnell, who will be on the ballot for re-election himself next year, also got in a shot at Speaker Nancy Pelosi.

‘If I were the speaker, I wouldn’t want to go into next year’s election having it credibly said that all you did for the whole Congress was harass the president and try to remove him from office,’ he said.

Pelosi, for her part, has stressed legislation the House has passed – including a measure that would call for universal background checks on gun purchases – and is pushing for legislation to lower prescription drug prices.

She, in turn, has blamed McConnell for not taking up legislation the House has passed in the Senate.

The White House released a transcript of the July 25 phone call on Tuesday – the same day Pelosi announced the Democrats’ inquiry into the president.

It showed Trump making the ask although the president has maintained it was a ‘perfect’ call and in no way pressured his Ukrainian counter part to act.

The result of those probes – if warranted – would be used to draw up articles of impeachment, which the full House would vote on. 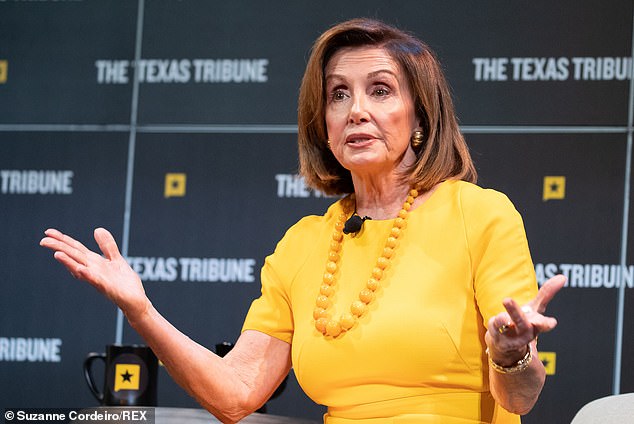 If the House approves articles of impeachment, the case goes to the Senate for trial, which would be presided over by the Chief Justice of the Supreme Court.

There appear to be votes in the lower chamber to move the impeachment process along.

More than half of the members of the House – all Democrats – support such a move, indicating it would pass.

There are 220 Democrats who support impeachment, according to a count by Politico.

With 435 House members, it would take 218 votes to approve articles of impeachment of the president.

In the Senate, Republicans hold 53 seats to the Democrats’ 45 seats – two seats are held by Independents who caucus with Democrats – which will make it hard to get the two-thirds vote – 67 senators – needed to convict the president.

WHAT HAPPENS NEXT? THE VERY COMPLICATED STEPS INVOLVED IN IMPEACHING DONALD TRUMP

Nancy Pelosi announcing a formal impeachment investigation is only the start of what will be an epic legal and constitutional clash.

Here is how impeachment goes from here.

Six committees are now tasked by Pelosi with investigating Donald Trump with the intention of deciding whether he should be impeached. They are the House Judiciary, Oversight, Intelligence, Ways and Means, Financial Services and Foreign Affairs committees. All of them are now likely to issue a flurry of subpoenas which is certain to lead to a new:

The Trump administration has so far resisted subpoenas by claiming executive privilege and is certain to continue to do so. Federal judges are already dealing with litigation over subpoenas for Trump’s tax and financial records and many more cases are likely to follow. But the courts have never settled the limits of executive privilege and whether an impeachment inquiry effectively gives Congress more power to overcome it. If Trump fights as hard as he can, it is likely to make its way to the Supreme Court. In the meantime, expect:

Democrats know they need to convince the public that Trump needs to be put on trial and the best way to do that is hearings like those which electrified the nation during Watergate. They botched the Mueller hearing but if they produce question and answer sessions with people from Trump-world which cause public outrage, they are on their way to:

4) Drawing up formal articles of impeachment in committee

The charge sheet for impeachment – the ‘articles’ – set out what Trump is formally accused of. It has no set format – it can be as long or as short as Congress decides. Three such set of articles have been drawn up – for Andrew Johnson on 1868, Richard Nixon in 1974, and Bill Clinton in 1998. Johnson’s were the most extensive at 11, Nixon faced three, and Bill Clinton four but with a series of numbered charges in each article. Once drawn up, the judicial committee votes on them and if approved, sends them to the House for:

The constitution says the House needs a simple majority to proceed, but has to vote on each article. Nixon quit before such a vote so Andrew Johnson and Bill Clinton are the only precedent. The House passed two out of the three articles against Clinton and all 11 against Johnson. Passing even one article leads to:

Even if the Senate is clearly not in favor of removing the president, it has to stage a trial if the House votes for impeachment. The hearing is in not in front of the full Senate, but ‘evidentiary committees’ – in theory at least similar to the existing Senate committees. The Chief Justice of the Supreme Court presides over it, but the procedures are set by senators. Members of the House prosecute Trump as ‘managers,’ bringing witnesses and presenting evidence to set out their case against the president. The president can defend himself, or, as Clinton did, use attorneys to cross-examine the witnesses. The committee or committees report to the full Senate. Then it can debate in public or deliberate in private on the guilt or innocence of the president. It holds a single open floor vote which will deliver:

Impeachment must be by two-thirds of the Senate. Voting for impeachment on any one article is good enough to remove the president from office. There is no appeal.