Ibuprofen can be taken by coronavirus sufferers because it will not increase their risk of death, a study has found.

The painkiller was left on supermarket shelves after the NHS stripped it from its advice on how to treat the infection and France’s health ministry warned it could ‘have negative effects’.

There were fears that the anti-inflammatory effects of the pills could dampen the immune system’s battle against Covid-19.

Inflammation is a natural process used by the body to fight disease and injury but ibuprofen is taken when the swelling gets too excessive or painful.

Earlier in the year NHS officials warned that people with coronavirus symptoms should avoid taking the drug in case it did turn out to have a negative effect.

But scientists in Denmark now say the drug – which can cost as little as £2 per 16-tablet packet – does not increase Covid-19 sufferers’ risk of death, hospitalisation, admission to an intensive care, or chance of needing a ventilator.

‘Considering the evidence, there is no reason to withdraw well-indicated use of NSAIDs during the SARS-CoV-2 pandemic,’ they said in the study, published in the esteemed journal PLOS Medicine.

Ibuprofen was left on supermarket shelves amid warnings over how it could worsen coronavirus infections. But a Danish study said they found no evidence that it had this impact

Scientists at the University of Southern Denmark monitored how the infection progressed in 9,236 people – including 248 who took non-steroidal anti-inflammatory drugs (NSAIDs) like ibuprofen – to reveal whether the drug negatively impacted the severity of the disease.

They found that there was no significant difference between risks for those who did or did not take the drug.

For those who took an NSAID their risk of dying 30 days later was 6.3 per cent, hospitalisation was 24.5 per cent, ICU admission was 4.9 per cent, and chance of being put on a mechanical ventilator was 4.5 per cent.

WHY DID EXPERTS SAY IBUPROFEN COULD WORSEN CORONAVIRUS SYMPTOMS?

Ibuprofen is an (NSAID). It works by blocking your body’s production of certain natural substances that cause inflammation, and is used to decrease pain or fever.

Scientists say there’s no evidence that ibuprofen makes COVID-19 worse, but there were fears this was the case at the early stage of the pandemic. This is why:

Professor Paul Little, primary care research, University of Southampton, said: ‘There is now a sizeable literature from case control studies in several countries that prolonged illness or the complications of respiratory infections may be more common when NSAIDs are used.’

Experts say paracetamol should be a first choice because:

1. Ibuprofen may dampen the body’s immune response to infection because it is has anti-inflammatory effects. This may slow the recovery process, Professor Ian Jones, a virologist at the University of Reading, said.

2. NSAIDs can cause stomach irritation and stress on the kidneys if taken over a long period of time. This could be exacerbated in those who already have kidney or stomach problems brought on by severe illness, such as COVID-19, experts said.

This differed little from the results for patients who did not take the drug. The study said their risk of death was 6.1 per cent, hospitalisation 21.2 per cent, ICU admission 4.7 per cent and chance of being put on a mechanical ventilation 3.9 per cent.

Professor Gino Martini, chief scientist at the Royal Pharmaceutical Society in the UK, was not involved in the study but said: ‘At the start of the pandemic there was research that indicated that there could be issues in administering ibuprofen to Covid-19 patients.

‘It was right that because of the uncertainty involved, a cautious approach to using ibuprofen was taken as evidence was collated and reviewed.

‘This current study indicates that ibuprofen is safe to use if you have Covid-19 and if you’ve got any doubts, speak to your pharmacist who can advise you further.’

Dr Rupert Payne, a consultant senior lecturer in primary care at the University of Bristol, said the health data in Denmark is ‘extremely good’, making the area ‘ideal’ for this sort of research.

‘A further strength is that, unlike many other countries, NSAIDs are generally only prescribed via prescription, so most patients using these medications would have been picked up by the analysis. This provides reassurance.

‘However, there is a possibility that doctors prescribing NSAIDs were more cautious about their use in sicker, older patients – particularly early on in the pandemic, when there was more uncertainty about their safety.

‘This could mean that the reason NSAIDs appear safe is simply because they were only being used in people at less risk of complications.

‘The only way we would be able to know for certain (if ibuprofen is safe) would be to conduct a proper randomised clinical trial, and this would be challenging to do.’

The participants were all Danish citizens who had lived in the country for more than a year. Their median age was 50 years and 58 per cent of them were female.

As many as 535 individuals included in the study died of coronavirus, while 1,512 were hospitalised, 290 were taken to an ICU, 235 needed mechnical ventilation, and 61 required renal therapy.

The results clash with previous studies and official advice on the drug – commonly used to treat pain caused by headaches, periods, muscle injury, cold and flu, and arthritis – that warned coronavirus sufferers to steer clear of Ibuprofen.

The Danish study says that fears over treating coronavirus patients with ibuprofen originated from a study on diabetic rats.

It was then followed by several others claiming there were risks taking the medicine including a South Korean study published in June that involved 1,824 hospital patients. 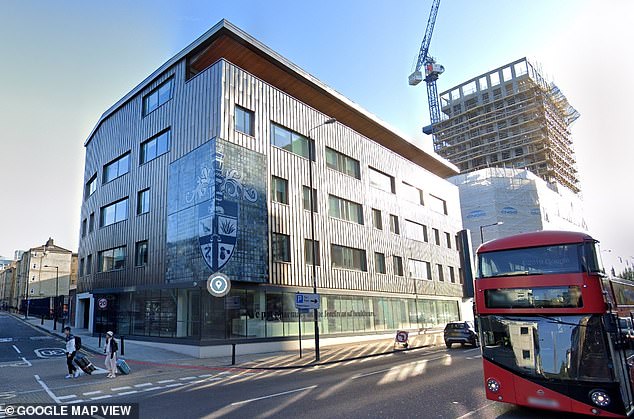 The Royal Pharmaceutical College said those that still had doubts about using the drug should speak to their GP. Its London-based office is pictured above on Google Street View 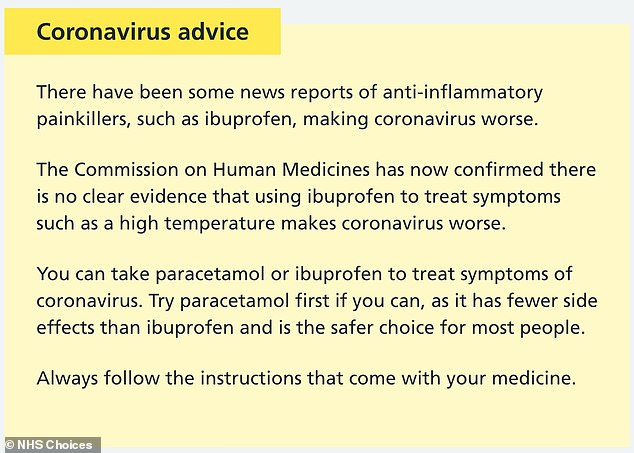 Fears were only heightened when the UK’s chief medical officer, Sir Patrick Vallance, said it would be ‘sensible’ to avoid the drug in light of concerns about its safety.

French health minister Olivier Veran brought the issue to the fore when he claimed the anti-inflammatory could ‘aggravate the infection’.

But scientists at King’s College London disputed the claims after reviewing 13 other studies into the effects of NSAIDs on coronavirus patients.

Their study, led by Dr Beth Russell, said: ‘Since the outbreak of the novel Covid-19 infection, various contradictory information has been circulated regarding the potentially negative effect of treating patients with NSAIDs.

‘Our search did not identify any strong evidence for or against the use of ibuprofen for treatment of Covid-19 specifically.

‘The current literature does not give conclusive evidence for or against the use of NSAIDs in the treatment of Covid-19 patients.’

The Danish study says that fears over treating coronavirus patients with ibuprofen originated from a study on diabetic rats.