Honduran national Oscar Pacheco-Leonardo, 33, was arrested in North Carolina on June 14 and charged with rape and indecent liberties with a child. He was released two days after posting a $100,000 bond

US Immigration and Customs Enforcement has blasted a North Carolina sheriff’s office for releasing a Honduran illegal immigrant accused of child rape and other charges instead of honoring an ICE detainer notice.

Oscar Pacheco-Leonardo, 33, a Honduran national and fugitive, was arrested during a ‘targeted enforcement operation’ in North Carolina’s Mecklenburg County on August 9, according to an ICE media alert Friday.

Pacheco-Leonardo’s arrest, ICE officials noted, came ‘nearly two months after the Mecklenburg County Sheriff’s Office refused to honor an ICE detainer, or even notify ICE of the release, and instead released Mr. Pacheco’s from local criminal custody following his arrest on first-degree rape and indecent liberties with a minor charges.’

ICE went on to note that ‘by releasing a previously deported alien facing serious criminal charges, Mecklenburg County chose to release a serious public safety threat onto the streets of Charlotte where he was free to potentially harm others for nearly two months until his capture by ICE.’

Pacheco-Leonardo was initially arrested by local police on June 14 on charges of First Degree Rape and two counts of Indecent Liberties with a Child.

Mecklenburg County Sheriff Garry McFadden said in a statement obtained by Fox 46 that Pacheco-Leonardo was released from jail on June 16 after he fulfilled his court-ordered terms and conditions of release, including paying his $100,000 bond.

‘Setting bond amounts and conditions of release are the responsibility of Mecklenburg County, Judges and Magistrates. MCSO has a responsibility to abide by such court orders,’ the sheriff said Friday.

ICE revealed that it had arrested fugitive Pacheco-Leonardo on August 9, almost two months later, slamming the sheriff’s department that originally released him 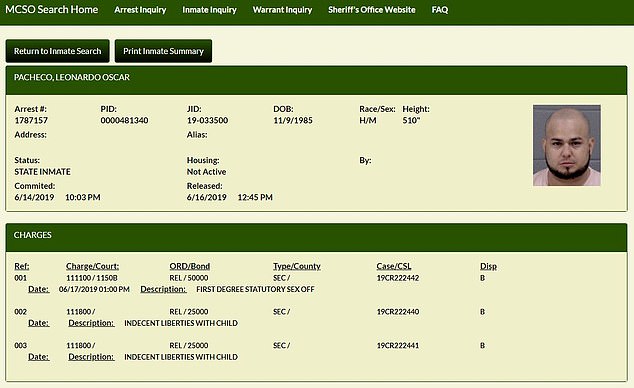 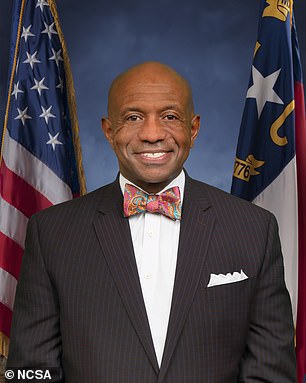 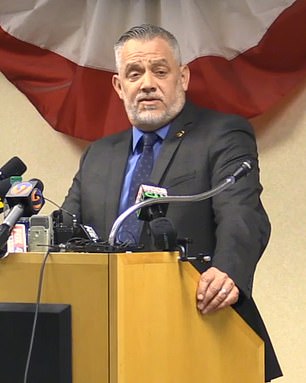 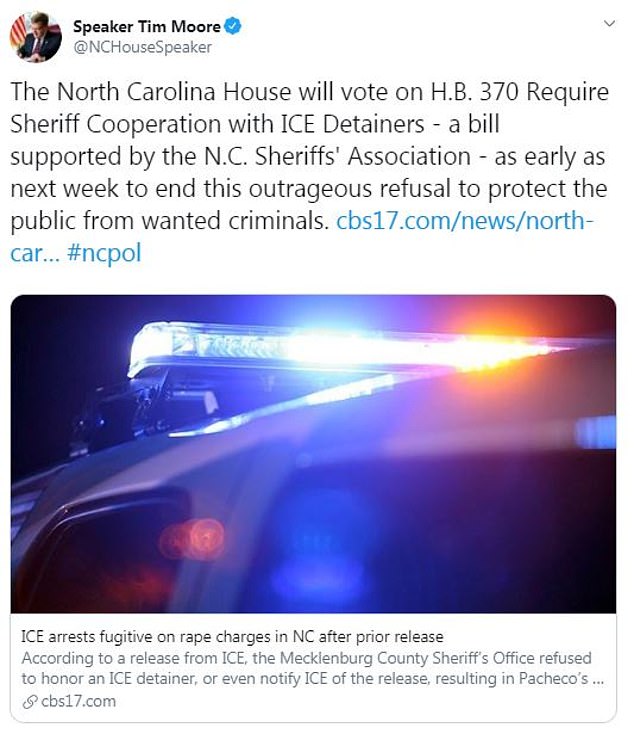 North Carolina House Speaker Rep. Tim Moore tweeted there would be a vote next week on House Bill 370 which would force law enforcement to comply with ICE detainer requests

He went on to note that the sheriff’s department does not honor voluntary ICE administrative detainers.

According to ICE, the detainers allow law enforcement agencies to hold on to people who are not legally in the US for an additional 48 hours ‘so that ICE may assume custody for removal purposes’ and are issued ‘when the agency possesses probable cause to believe an alien is removable from the United States.’

McFadden said that when Pacheco-Leonardo was arrested in June, the sheriff’s office was unaware that he had been previously deported in July 2006, because ICE had not informed them of this fact, despite that information being ‘readily available’ to the agency.

McFadden added that ‘it is a federal felony to re-enter the United States after having been previously deported.’

When the sheriff’s office notified ICE that it had arrested Pacheco-Leonardo on the rape and indecent liberties with a child charges, McFadden said ICE opted to issue the voluntary ICE administrative detainer for him instead of a criminal arrest warrant for ‘Illegal Re-Entry.’

This, despite ‘knowing that it is against MCSO’s policy to honor such detainers.’

‘The reasons for that decision have yet to be satisfactorily explained to me or the public,’ McFadden said.

In the ICE media alert, the department revealed 22 other cases over the last nine months during which the Mecklenburg County Sheriff’s Office had released foreign nationals in the US illegally, instead of honoring ICE’s detainer requests.

ICE Enforcement and Removal Operations Atlanta Field Office Director Sean Gallagher said in a statement obtained by WBTV that Pacheco-Leonardo’s case ‘is yet another example of a clear public safety threat being released onto the streets of Mecklenburg County rather than into ICE custody due to the current sheriff’s policy on ICE non-cooperation.’

He went on to say that ‘Mecklenburg County sheriff’s decision to restrict cooperation with ICE serves as an open invitation to aliens who commit criminal offenses that Mecklenburg County is a safe haven for persons seeking to evade federal authorities, and residents of Mecklenburg County are less safe today than last year due these policies.’

In response to this immigration detainer argument, Republican North Carolina House Speaker Rep. Tim Moore tweeted ‘The North Carolina House will vote on H.B. 370 Require Sheriff Cooperation with ICE Detainers – a bill supported by the N.C. Sheriffs’ Association – as early as next week to end this outrageous refusal to protect the public from wanted criminals.’