Idaho woman accused of murdering her husband by giving him a fatal dose of Benadryl and dumping his body over the side of their boat had tried to poison him once before on Florida trip, court documents allege

An Idaho woman who is awaiting trial for allegedly poisoning her husband with a lethal dose of Benadryl and then throwing his body over the side of their body is suspected of making a prior attempt on his life during a trip to Florida.

Court documents that were filed earlier this month in the case of Lori Isenberg contend that the 66-year-old woman, who is currently serving a sentence on an unrelated embezzlement conviction, had previously tried to poison her husband with the same drug that ultimately killed him, and researched ‘Florida water depths, currents, tides, drowning, boat accidents and boat rentals.’

Isenberg was indicted in March on murder charges in the death of her husband, retired forester Larry Isenberg, 68, who was reported missing and presumed drowned in Lake Coeur d’Alene in February 2018.

New documents have revealed that accused killer Lori Isenberg, pictured in court earlier this year, had tried to poison her husband, Larry, once before 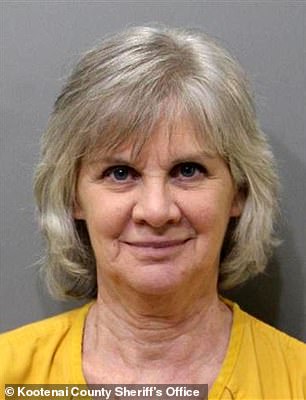 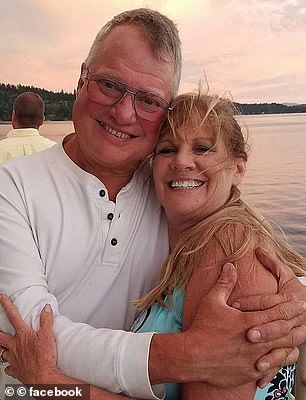 Lori, 66 (left), is awaiting trial in Idaho on a charge of first-degree murder in the poisoning death of her husband, Larry Isenberg (pictured together, right), in February 2018

His wife told officers he had fallen off the boat while trying to fix the motor.

But when Larry’s body was recovered from the lake 16 days later, an autopsy showed that he had not died by drowning, but had been poisoned with Benadryl.

According to the newly filed court records, Lori began to take steps to kill her husband so he would not find out that she had been stealing large sums of money from the non-profit organization helping low-income families where she worked.

Lori feared that Larry would have divorced her and kept some, if not all, of their jointly-owned property worth about $1.5million, according to the documents.

Before heading to Lake Coeur d’Alene for what was supposed to be a romantic pre-dawn boat ride on February 13, 2018, prosecutors said that Lori had looked into conditions on Lake Pend Oreille, including overnight boating.

In the immediate aftermath of her husband’s death, Lori liquidated all of their joint accounts and transferred other community property to herself, her daughters and her sister, evidence presented by the prosecution alleged.

Isenberg has pleaded not guilty to a count of first-degree murder and is being held in the Kootenai County jail on $2million bond. On Tuesday, a judge ruled that her trial will be delayed again due to the coronavirus outbreak.

The state Supreme Court previously ordered that all criminal jury trials will be delayed until August 3, but later pushed back the date to September 14.