Experts have claimed that everyone has an ‘inner madwoman’ who makes them feel ‘less than’ – and that befriending the self-critic is the key to coping with stress.

Twin sisters Dr Emily and Amelia Nagoski, from Massachusetts, have written a book entitled Burnout, which looks into avoiding the physical and mental exhaustion that comes from not being able to deal with stress in a healthy way.

After studying how women build up the emotion and then struggle to deal with it, the authors have offered solutions on how to ‘complete the stress cycle’ and have introduced several key concepts.

Amongst these include the notion that all females have an ‘inner madwoman,’ a voice which highlights their failures in a negative light, which only adds to their stress levels.

Dr Emily and Amelia Nagoski explain that befriending your ‘inner madwoman’ is key to get rid of stress (Pictured: stock picture)

The concept was born from the literary character of Bertha Mason, Mr Rochester’s insane wife in the Charlotte Brontë”s class Jane Eyre, who he moved to Thornfield Hall and locked in a room.

Who is ‘the madwoman in the attic’?

In the novel, she is described as the violently insane first wife of Edward Rochester, who moved her to Thornfield Hall and locked her in a room on the third floor.

However, Bertha manages to escape, causing havoc in the house: starting a fire in Mr Rochester’s bed and biting and stabbing her visiting brother.

Rochester’s marriage to Bertha eventually stands in the way of his marrying Jane, who is unaware of Bertha’s existence and whom he truly loves.

Bertha dies after throwing herself off the roof, leaving her husband free to marry Jane.

Emily and Amelia argue the best way to prevent this inner voice from becoming destructive – as Bertha Mason becomes in the novel – is to ‘befriend’ her as a way to relive the daily internal battle and better cope with stress that comes your way.

Dr Emily and Amelia explain that the ‘madwoman’ is a mental representation of everything we aspire to be and that we’re not, or everything we could have been.

It also carries a sense of what society expect a woman to be and as a result, the ‘madwoman’ manifests in moments of harsh self-criticism and insecurities, adding to stress and leading women to be too hard on themselves.

Dr Emily, a best-selling author and director of Wellness Education at Smith College, believes that each ‘madwoman’ is different from person-to-person.

In the book, the sisters write: ‘Each person’s madwoman is different. For you, maybe she’s more like a shadow, following you around, a perpetual reminder of what you’re not; or a spindly creature lurking under the bed until you put on some jeans that feel tight or send a text you immediately wish you hadn’t sent; or, as one friend of ours put it, “a whiny, annoying brat of a six-year-old who thinks she knows everything and will not—give me strength—shut up unless I take deep breaths for her, then she goes quiet.”

Another friend said, “”She’s the skinnier, younger-looking, richer, better-dressed, prettier-by-societal-standards, lives-in-the- amazing-and-much-larger-house-next-door-with-the-perfect- lawn version of me. On the outside, she really seems to have her s*** together. But I know (and I have to keep reminding myself all of the time) that deep down somewhere in her, she is sadder and lonelier and doesn’t have much more than what is on her outside, than me.”

Still another friend said, “Mine is more like a teenage version: the smart, quiet, yet sad and downtrodden girl who always sat in the back of class and no one talked to. When something goes wrong, I can hear her ‘told you so’ voice in the back of my mind.”

‘Some madwomen are more protective than destructive; some are more sad than angry; some have a sense of humor. They are the shadow, the hurt little girl, the downtrodden teenager, the “perfect” version of ourselves, the madwoman in the attic yelling terrible things that echo through the house. What’s yours like? Take a few minutes to imagine her—her uncomfortableness and her fragility, both.’ 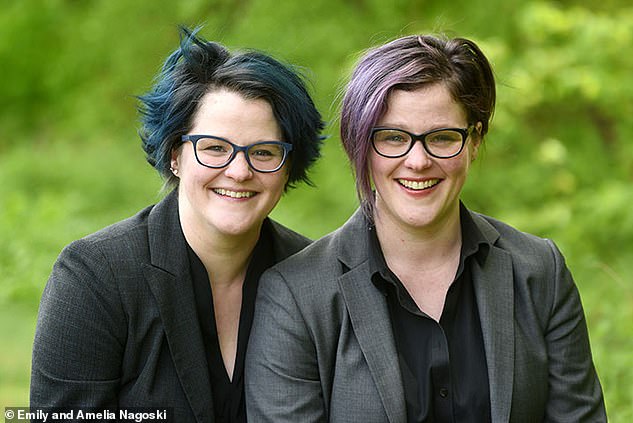 To overcome the ‘inner madwoman,’ they argue that rather than trying to repress the voice, women should identify, understand and befriend her.

In identifying when the inner voice becomes too prominent, a female can determine what causes the stress, before taking back some control.

Understanding where the voice is coming from – be it from trauma, education, or friendships – is one step towards appeasing your self-criticism.

Without checking in with the voice, Dr Emily and Amelia argue that the ‘inner madwoman’ can become toxic and exhausting to deal with, leading to a build-up of stress and eventual burnout. 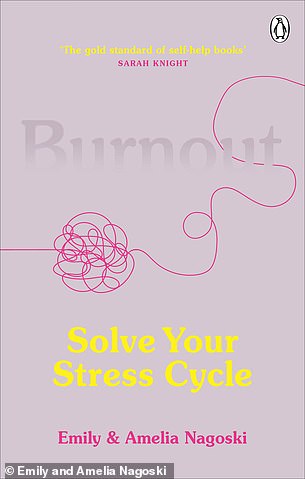 Burnout: Solve Your Stress Cycle, by Emily and Amelia Nagoski is published by Vermilion

Dr Emily and Amelia go on to say that the madwoman can also be a source of self-motivation for some people, pushing them to work harder, exercise, and get out of bed in the morning.

But because she walks the line between motivation and self-punishment or persecution, people can be left with a feeling of lack of compassion over failed achievements, only focusing on the things they do wrong, instead of recognising their stress.

Dr Amelia and Emily argue this can lead people to beat themselves up to be active and achieve their goal, which leads to a vicious circle.

‘They’re worried that if they stop beating themselves up, they’ll lose all motivation,’ they explain.

They add that while self-compassion can be difficult, one key to avoid feeling stressed by the madwoman is to befriend her, by picturing her and looking over the shortcormings she highlights with kindness.

Instead of stressing over the things you feel you do wrong, Dr Amelia and Emily say it is better to tell yourself that you’re doing the best you can.

Tips to break down the stress circle

Run: Emily and Amelia insist that the best way to beat down stress is to exercise regularly because it gives the body a way to expire the stress.

Breathe: Slow Breathing and contracting your belly is also a good way to get rid of some of the stress quickly, when it’s not that high

Have a chat: Positive social interaction, like a fun chat with a co-worker or loved one can reassure you that the world is a safe place and give you the power to let the stress go.

Laugh: belly laughs in particular – is great against stressed, as it’s been proved by research that it maintains social bonds and regulates emotions.

The six-second kiss: Kissing a loved one for six seconds gives you the opportunity to realise you really like them and feel safe with them, which sends reassuring signals to your body.

A 20-second hug with a friend works just as good if you’re single.

Demonstrations of affections work just as well with pets, so petting dogs, cats or other domestic animals is also a great way to regulate stress.

Cry: Sometimes the only way to deal with stress is to let it all out and cry, thus expiring the stress and negative emotions that come with, in order to feel relieved.

Burnout, by Dr Amelia and Dr Emily Nagoski is published by Vermilion.