This is the heart-stopping moment a Bentley driver narrowly avoided a potentially fatal head-on smash with after overtaking on a pedestrian crossing.

Dashcam footage filmed on a coach shows the pricey motor’s ‘idiot’ driver attempt to cut in front of the huge vehicle, just seconds before the ‘unbelievable’ overtake.

As the coach approaches the roundabout exit in White City, London, the charcoal-grey Bentley is seen vying to get in front of the vehicle.

The coach driver said: ‘As the traffic started to move I entered the roundabout going straight on and the Bentley decided he was going to try and overtake me using a left turn only lane on the roundabout and get in front of me. 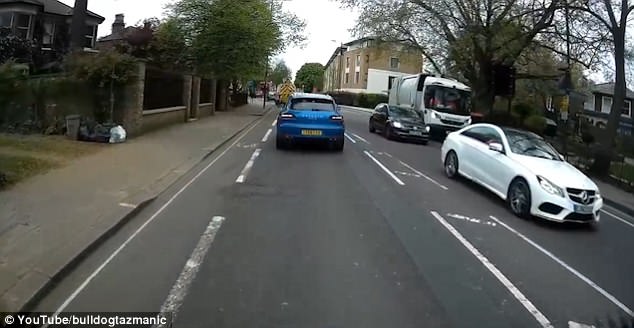 ‘I hit my brakes and horn and he obviously decided he wouldn’t make it (which he wouldn’t have) and stopped before hitting the side of the coach or mounting the pavement.’

As the coach stops to allow two men to cross a pedestrian crossing, the impatient Bentley driver is seen zooming across on the wrong side of the road. 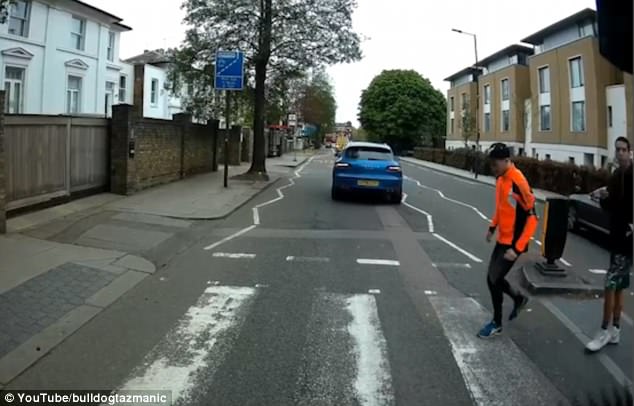 Despite the ‘unbelievable’ maneuver, the Bentley driver is no further ahead in traffic and is still stuck behind the blue 4×4

‘He decides to drive on the opposite side of the road, the wrong side of the central reservation and into oncoming traffic at speed nearly causing an accident,’ the coach driver added.

‘He then swerves in front of the 4×4 and into an active bus lane.’

Despite the ‘unbelievable’ maneuver, the Bentley driver is no further ahead in traffic and is still stuck behind the blue 4×4.