If you really want to get away from it all, try the Rewa Eco-Lodge in Guyana

Talk about off the beaten track.

If you want to stay at the Rewa Eco-Lodge in Guyana you’ll need to go to considerable trouble. The only way of reaching it is to take a chartered plane from the Guyanese capital of Georgetown to Annai, two hours away, then travel by boat for a couple of hours along the Rewa river (which the lodge can arrange).

Or do what I did and stay there during an epic jungle kayaking expedition, courtesy of adventure holiday firm Bushmasters. The effort is well worth it, though, because the lodge, set up in 2005, is in a jaw-droppingly pristine tract of jungle and is run by the community of neighbouring Rewa village, which is intriguing to say the least.

Rewa village is nestled in the heart of the Guyanese jungle and was founded in 1961 during the rubber tree industry boom. Above, the village’s eco lodge, which is only accessible by boat

Rewa has a population of just 300 and was established in 1961 during the rubber tree boom by two brothers.

It has an almost paradisaical air about it when you first arrive, with manicured gardens and traditional palm-thatched shelters offering shade from the heat.

During a tour of the surrounds we bumped into one of the founders (now aged 92) while walking through a maze of sleepy buildings baking in the tropical sun. 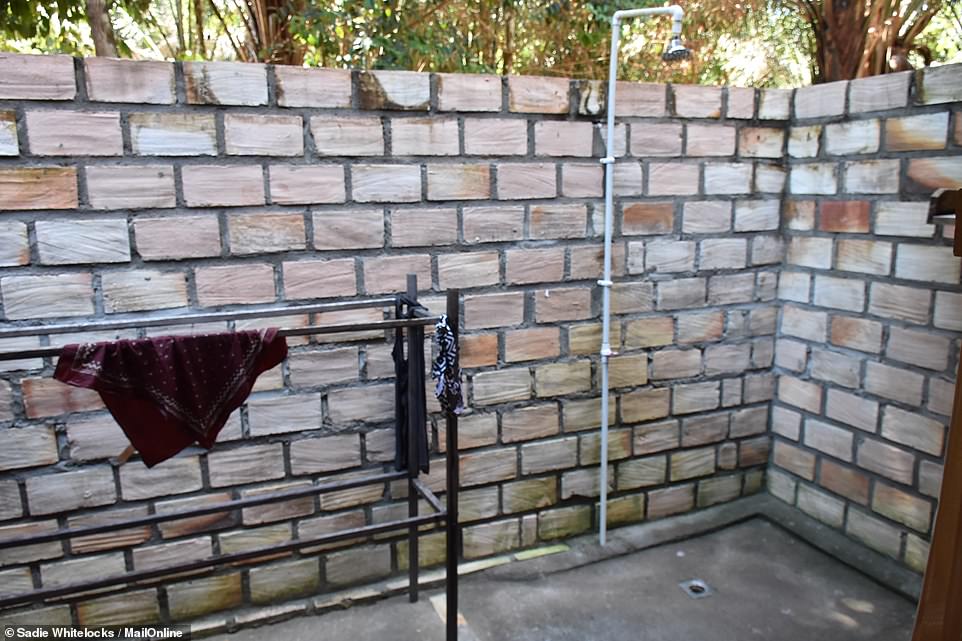 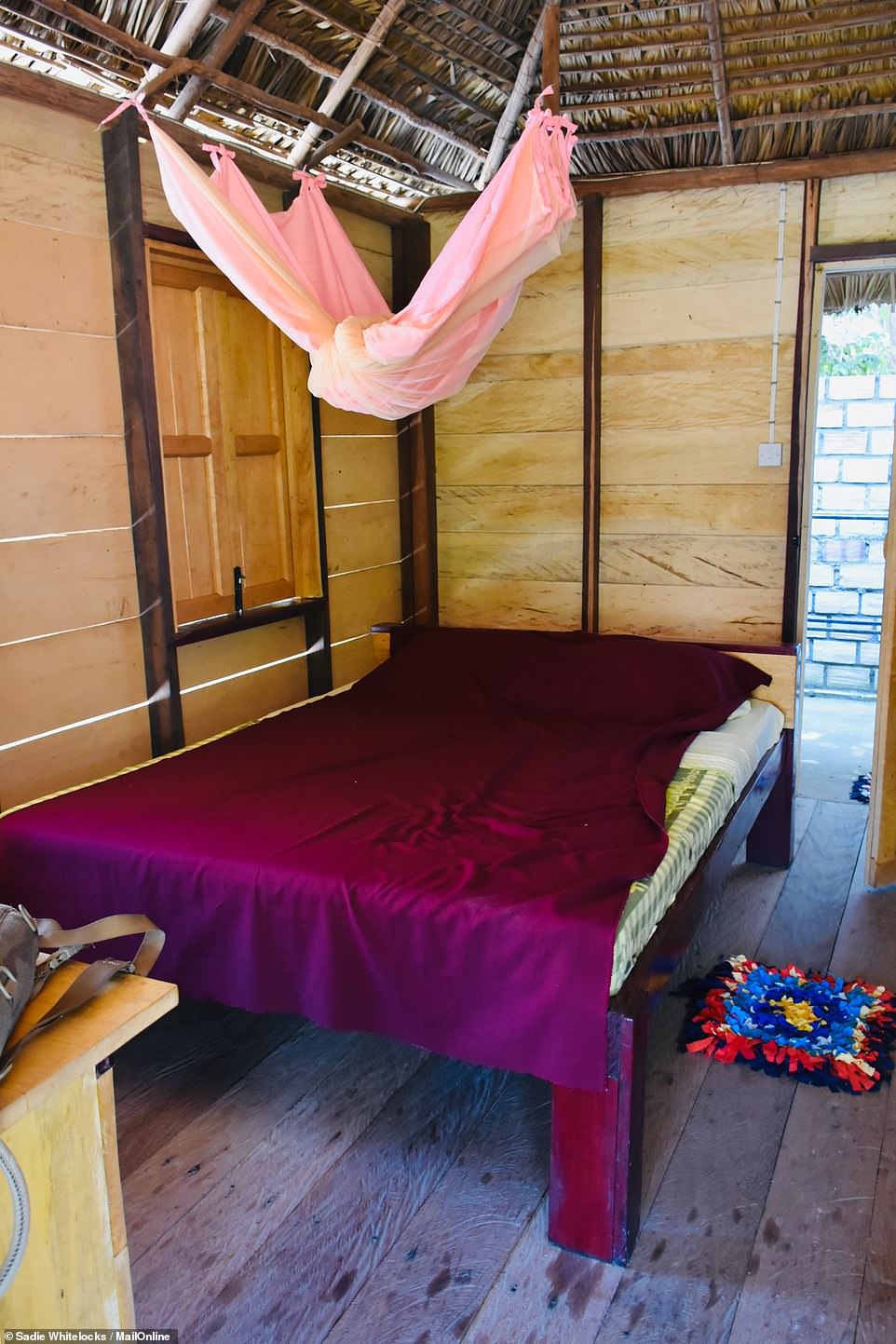 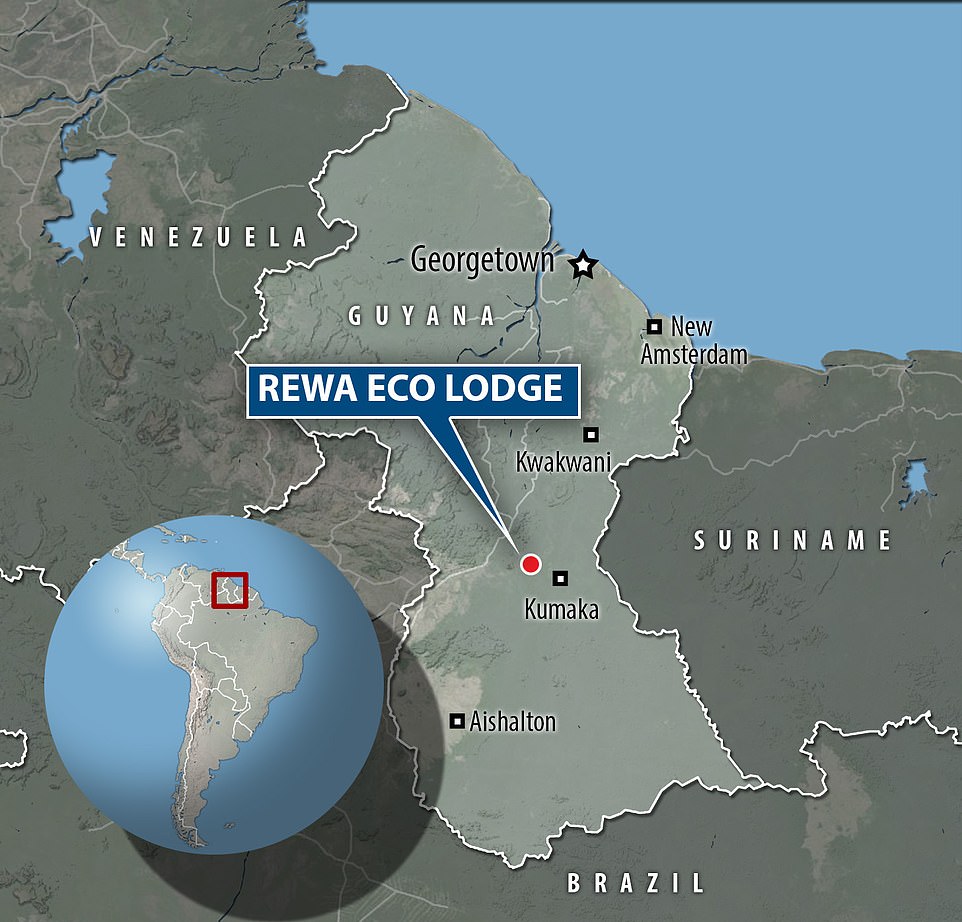 Rewa Eco Lodge truly is off the beaten track, as this locator map shows

We were told by one of the residents, 31-year-old Vivian James, that the man’s name was John Edwards and that we should speak loudly as his hearing wasn’t too good.

There was nothing wrong with his hands, though, which were steadily weaving a straw basket as we approached. Assembling baskets and handicrafts is his favourite hobby.

He seemed engrossed in his work, and he sat without his shirt on meticulously placing pieces of straw on top of each other to form intricate patterns.

Bidding the smiley village elder goodbye, we continued wandering through the settlement. It was a Thursday afternoon, around 3pm, but there weren’t too many people around. 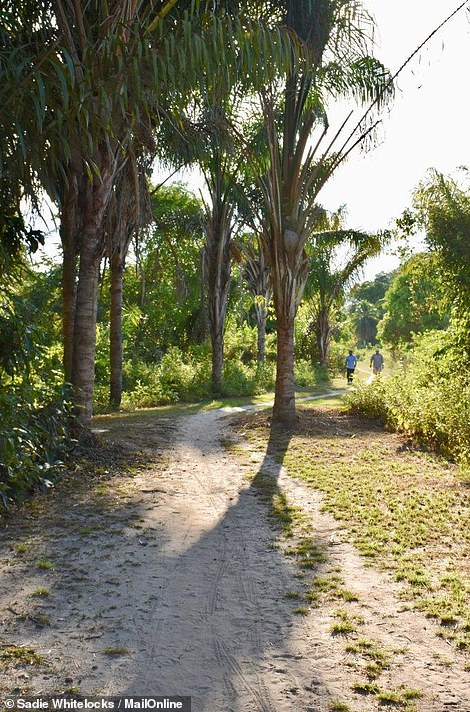 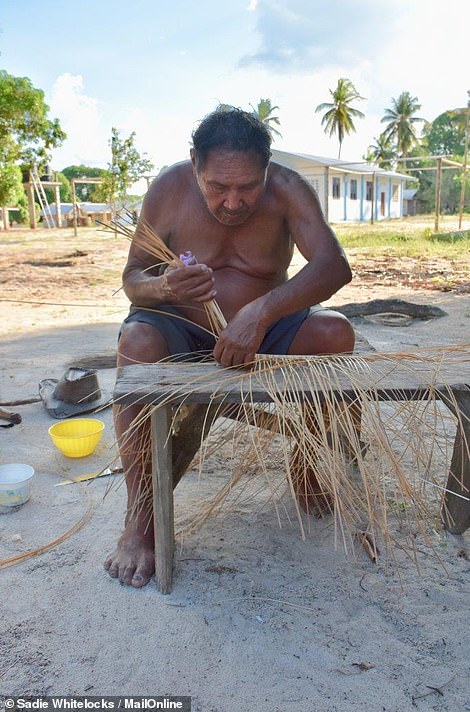 The sandy path leading to Rewa village (left) and one of the village founders, 92-year-old John Edwards, sits weaving with dried straws (right) 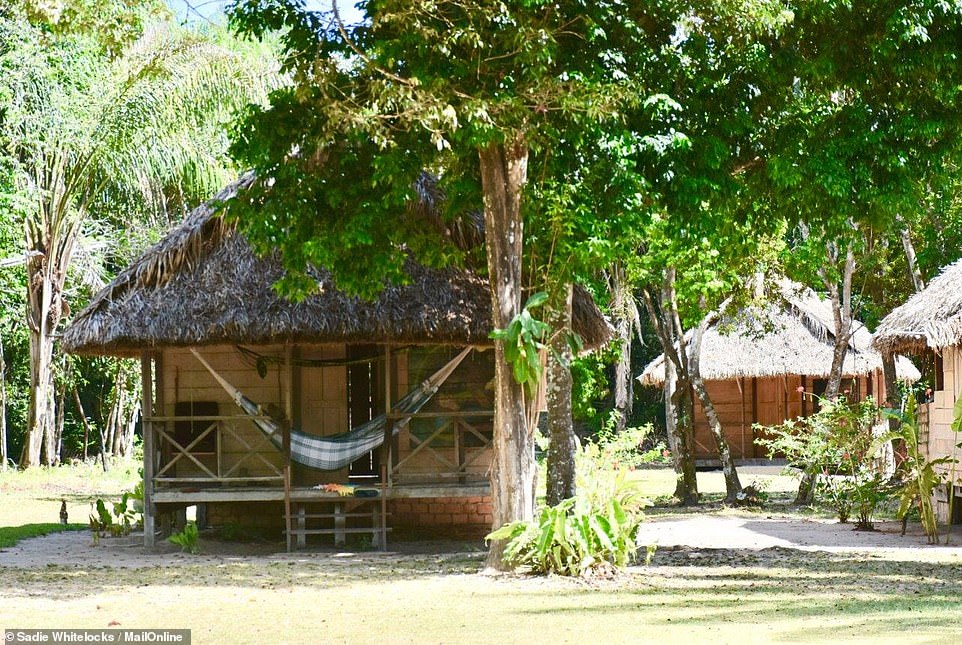 It appeared most were seeking some solace from the searing 35 Celsius degree heat.

School had finished for the day and there was a cleaning lady dusting the large classroom, which was split into sections for different years. I was told there are 76 children currently in Rewa.

I spied a board detailing the ‘seven ethnic groups of peoples’ in the world – ‘Amerindians’ (the indigenous Guyanese community), ‘Africans’, ‘Portuguese’, ‘Chinese’, ‘East Indian’, ‘Europeans’ and ‘mixed’.

Leaving the school, we passed the health centre and paid a visit to the small village store.

Vivian revealed that sugar is one of the first things to run out at the shop because ‘everybody needs it for their tea and porridge’. 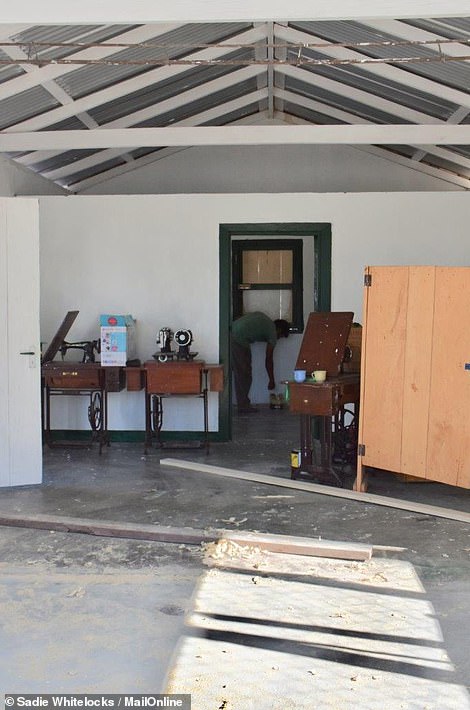 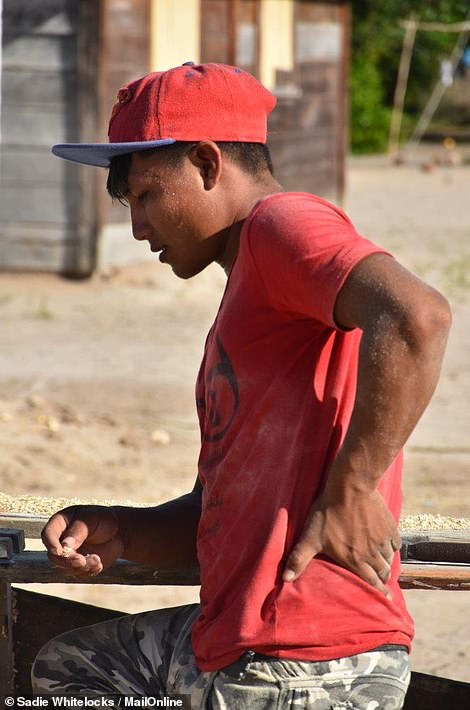 Singer sewing machines are seen in a room in Rewa village (left), while a local carpenter sweats in the sweltering heat (right) 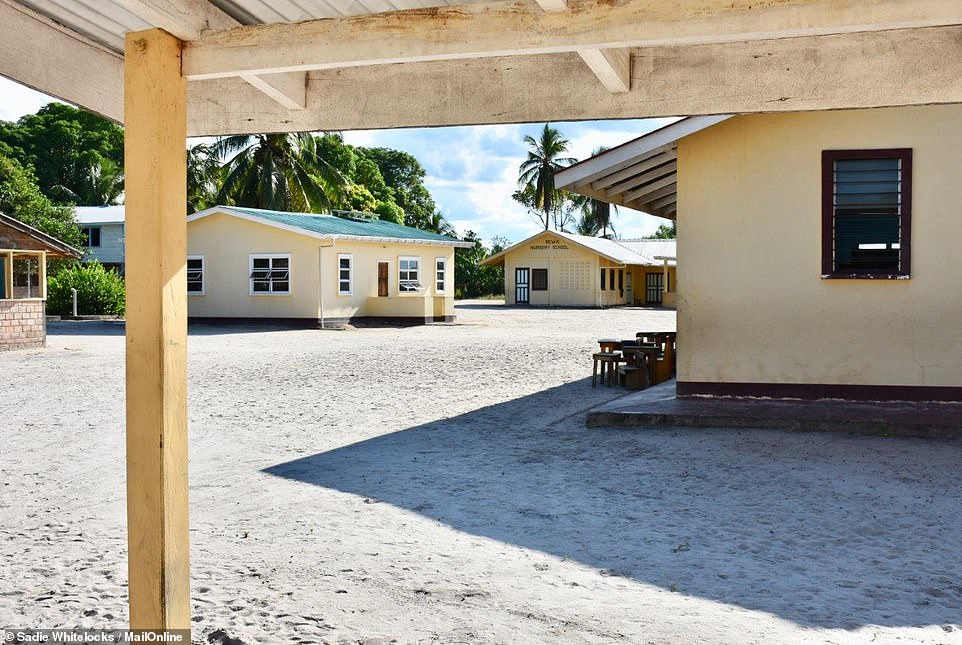 A general view of Rewa village, with the nursery school seen in the distance

Salt, flour and rice are other popular commodities. I also spied tins of sardines, lightbulbs and sturdy pitchforks for sale.

On wandering back towards the eco lodge, we ran into a group of carpenters who were profusely sweating as they went about fashioning a table out of lengths of wood.

They explained that they were making it for the community hall across the way. Vivian told me Rewa has a strong community feel and ‘everyone knows everyone’.

On the subject of families, he revealed: ‘Back with my grandparents’ generation it was typical for people to have 16 children but now couples have two or three as financially things are getting harder.’ 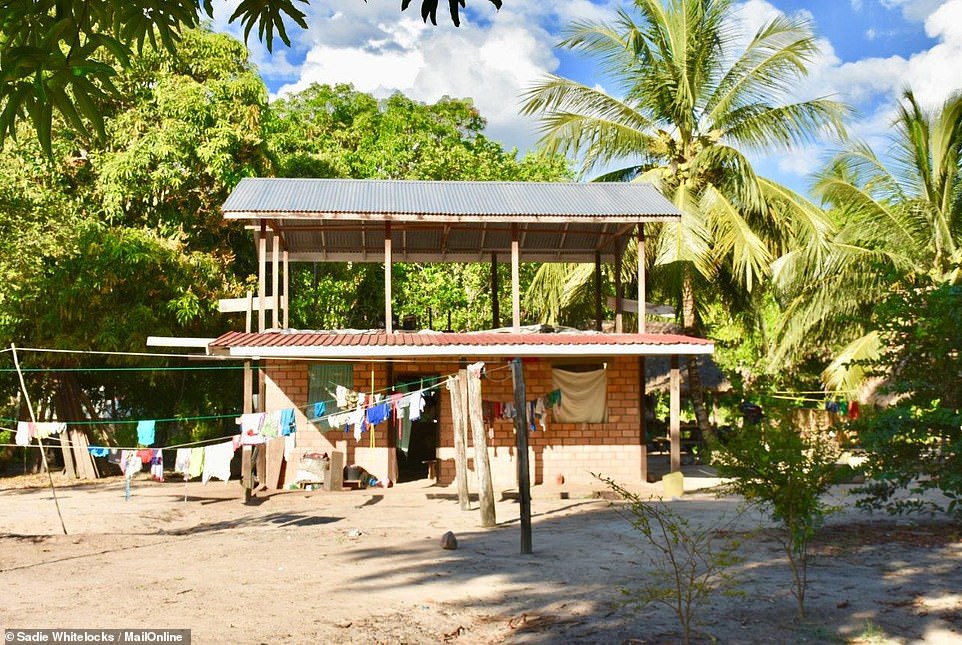 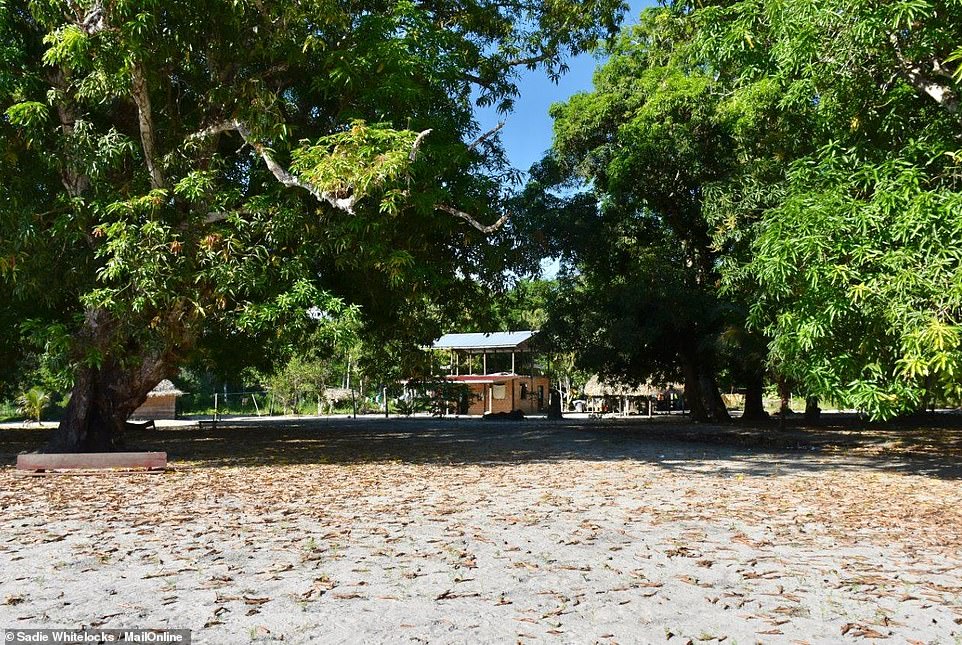 Back in the day the tribal villages in Guyana lived off the land, fishing and farming and fashioning clothing out of raw materials.

But now it seems that the Western way of life has crept in. Vivian revealed he merely wore a leaf to maintain his modesty when growing up but now he wears ‘Western clothes’.

There is now electricity in Rewa, the government provided funding for solar panels and some people have installed televisions.

‘The TV owners are very popular in the village and everyone gathers around for viewings,’ Vivian chimed.

While the rubber tree trade and latex extraction from the balata trees has died away tourism is the main focus for Rewa and 75 per cent of people in the community are employed by the eco lodge on a seasonal basis. 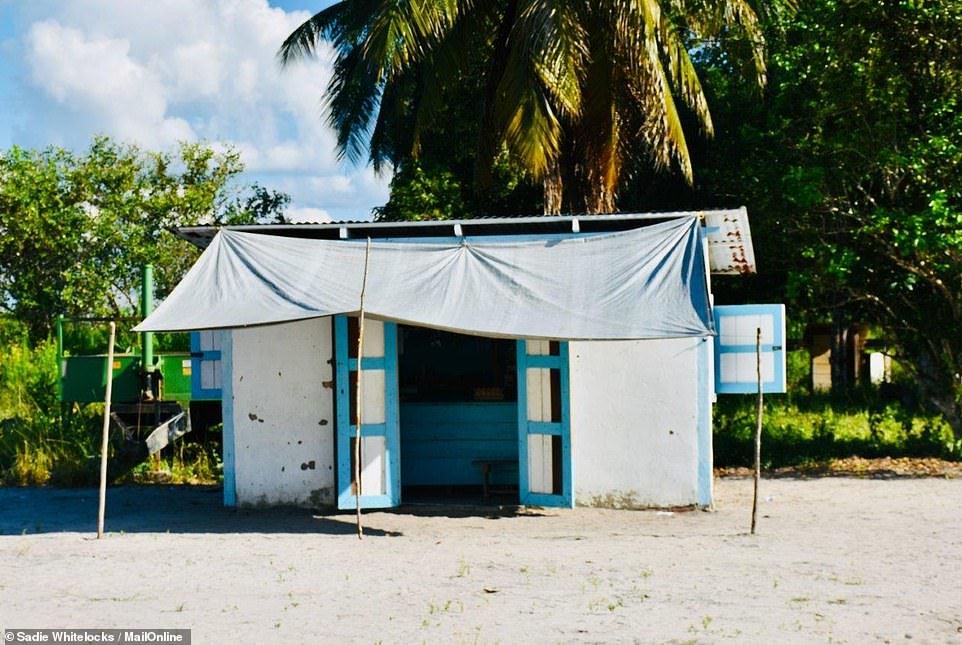 An exterior shot of the village shop at Rewa, with a makeshift tarpaulin at the front to shield the building from the sun 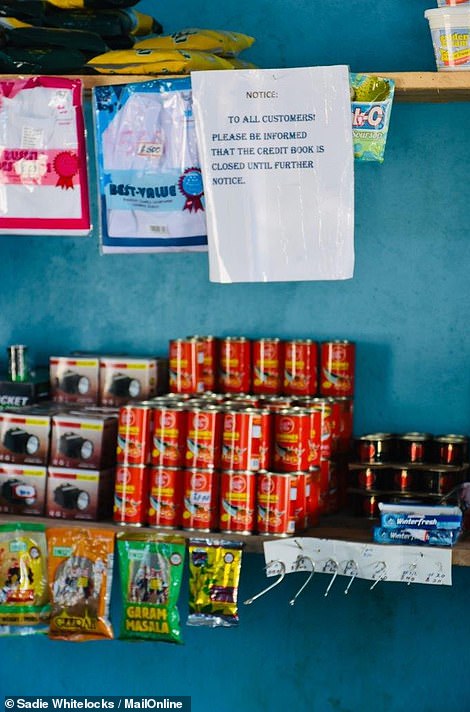 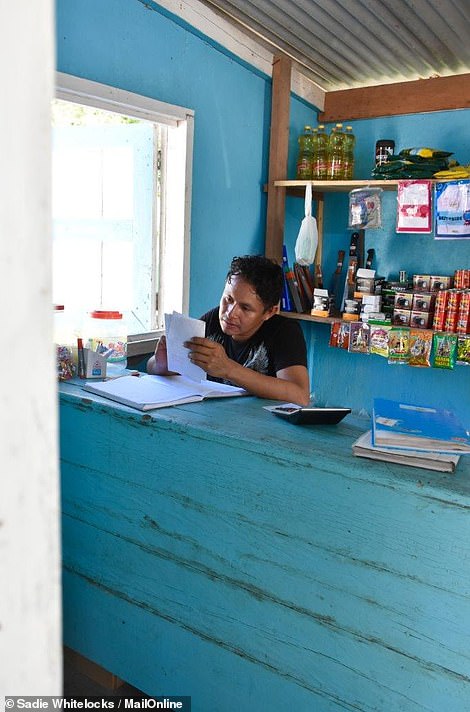 A notice informs customers that the credit book is ‘closed until former notice’ (left), while the shopkeeper takes a look over his books (right)

TV crews are common visitors in the Rewa area, as it is where shows such River Monsters and Naked and Afraid are regularly filmed.

Asked to sum up life in Rewa, Vivian replied ‘it’s quite crazy’, adding: ‘Everyone in the town is clamouring to get their hands on supplies and sometimes life can be tricky.’

To me the place seemed sublimely sedate and the eco lodge they’ve crafted certainly does a grand job at disguising any craziness.

The charming lodge proves to be a true slice of paradise, despite the basic facilities. 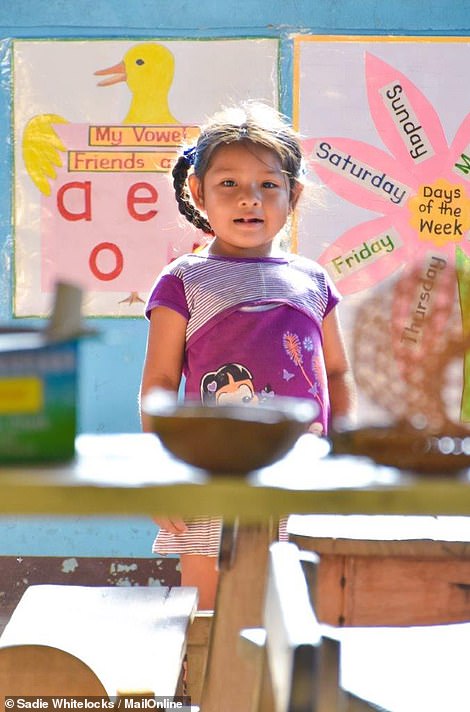 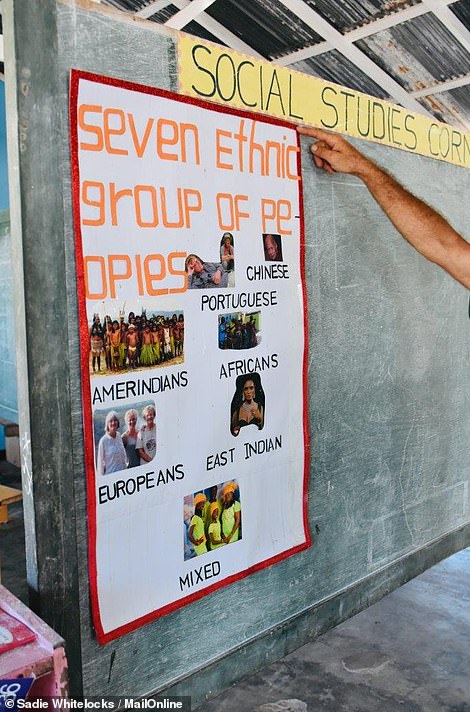 A child seen in one of the classrooms at the school (left) and a board detailing the ‘seven ethnic groups of peoples’ in the world – ‘Amerindians’ (the indigenous Guyanese community), ‘Africans’, ‘Portuguese’, ‘Chinese’, ‘East Indian’, ‘Europeans’ and ‘mixed’ 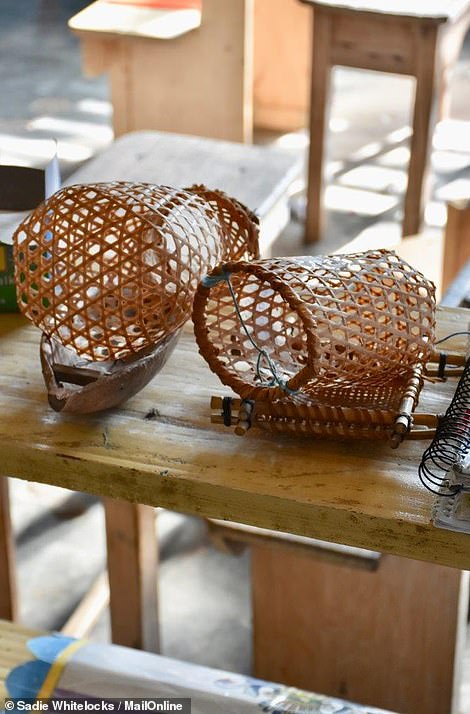 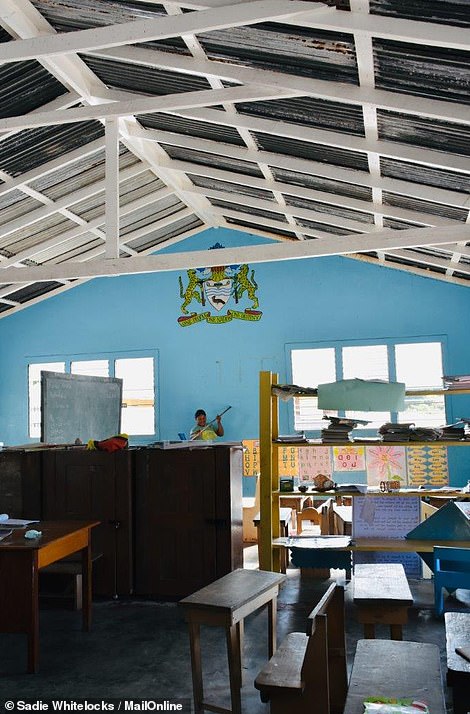 An example of traditional basket weaving (left) and the interiors of the school, where shelves and other pieces of furniture are used to divide it into different classroom sections (right)

MailOnline travelled through Guyana with Bushmasters. The travel firm runs various expeditions in the country, with the next kayaking adventure taking place April 7 – 19 2019 and priced at £1,930.

To make long airport transfers more comfortable, you can check into lounge areas with Priority Pass standard plus membership, which starts at £189 for ten free visits at participating lounges including No1 Lounge at Gatwick and Wingtips lounge at JFK.

For more information on what to do in Guyana, visit www.guyanatourism.com.