Shopper shows off his epic $2 snack container find that washes, strains and stores fresh fruit: ‘This is gold’

A shopper has discovered a ‘genius’ $2 food storage container in IKEA and claimed the triple purpose container is like ‘gold’.

The cheap snack container – dubbed Splitterny – allows you to wash, strain and store fresh fruit and provides a useful compartment for dry goods such as nuts or crackers.

‘Time to run to IKEA’ the Sydney-based foodie said on TikTok. 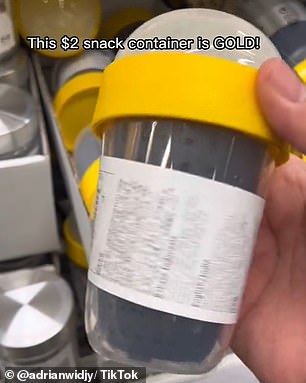 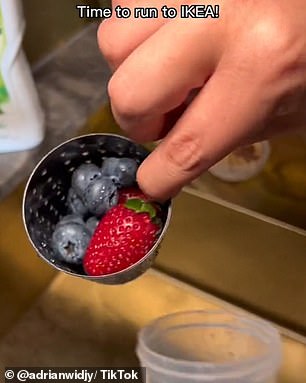 The container has three uses, it can wash and store fresh fruit as well as storing dry goods. It has a special inner vessel to drain water after washing fresh fruit

‘This $2 dollar snack container is gold,’ the foodie said.

‘You can put in a serving of berries and use it as a wash and dry before closing. Then the top bit can be used for other dry snacks. Time to run to IKEA.’

The container is perfect for quickly preparing a snack to bring with you to work.

‘I love this I need to buy one!’ another said.

Another user commented that it would be perfect for parfaits. 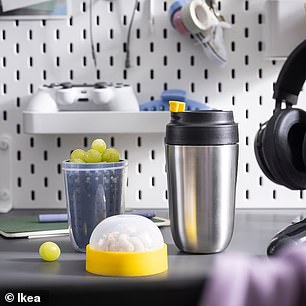 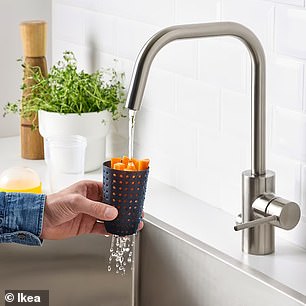 ‘You can put in a serving of berries and use it as a wash and dry before closing. Then the top bit can be used for other dry snacks. Time to run to IKEA.’

However not all TikTok users were fans of the container.

‘Spend $20 petrol for a $2 container,’ another commented.

How to properly freeze vegetables

Most vegetables can be frozen, but will need to be blanched first

Blanching is boiling food quickly for a few minutes before cooling it down straight away in ice-cold water to stop the cooking process, this helps neutralize the bacteria

To freeze veg, chop it all up and freeze them flat on a tray to prevent clumping, then pop it in freezer packs and put in the freezer

If your fruit has any bruises or gashes, carve these away as these can cause your fruit to spoil quicker. Cut into small bite-sized pieces, and try to remove as much moisture from your fruit

Only freeze fresh fruit and veg, and wrap your produce well to avoid freezer-burn. Remove as much air from the packs as possible beforehand.

Freezing methods for each vegetable

Onions should be sliced, they don’t need to be blanched and can last up to three months in the freezer

Leafy greens should be blanched to last up to 3 months

Broccoli and cauliflower should be cut into bite-sized pieces. Blanched, drained, and frozen in small packs. Lasts between nine and 10 months

Potatoes and other root vegetables should be cut, blanched and dried and frozen in small batches. Lasts between 10 – 12 months

Apples should be peeled, cored and cut into bite-sized chunks to be frozen. Lasts between nine to 10 months

Berries shouldn’t be washed before freezing to avoid clumping. Lasts between six to nine months

Bananas should be peeled, cut into bite-sized chunks, and frozen. Lasts between two to three months

Previously, an Australian mum-of-two shared her easy trick for keeping berries fresh for longer in the fridge.

Chantel Mila, from Melbourne, soaked the berries in vinegar and water before storing them in an airtight container with a bit of paper towel to reduce food waste and keep her grocery bill down.

The cleaning and organising queen, known as Mama Mila online, shared the trick in a now-viral video with her 942,500 TikTok followers. 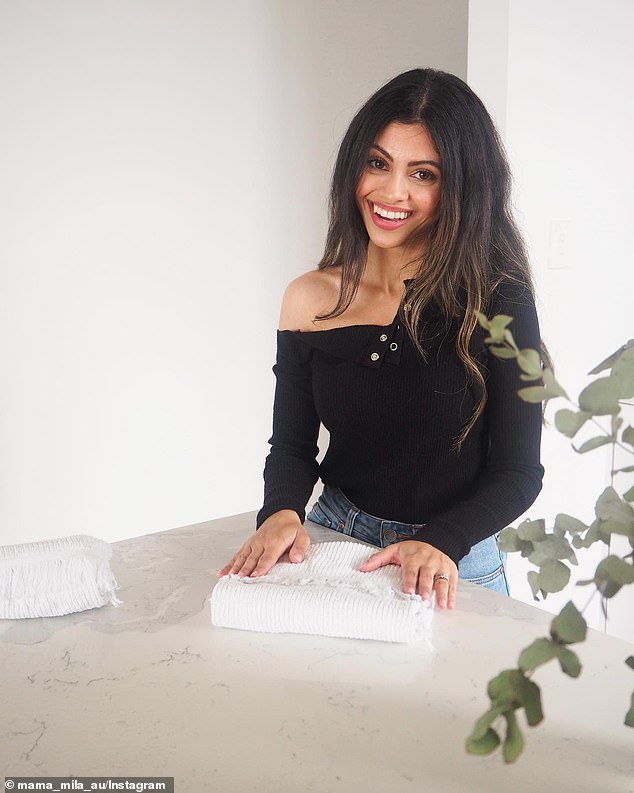 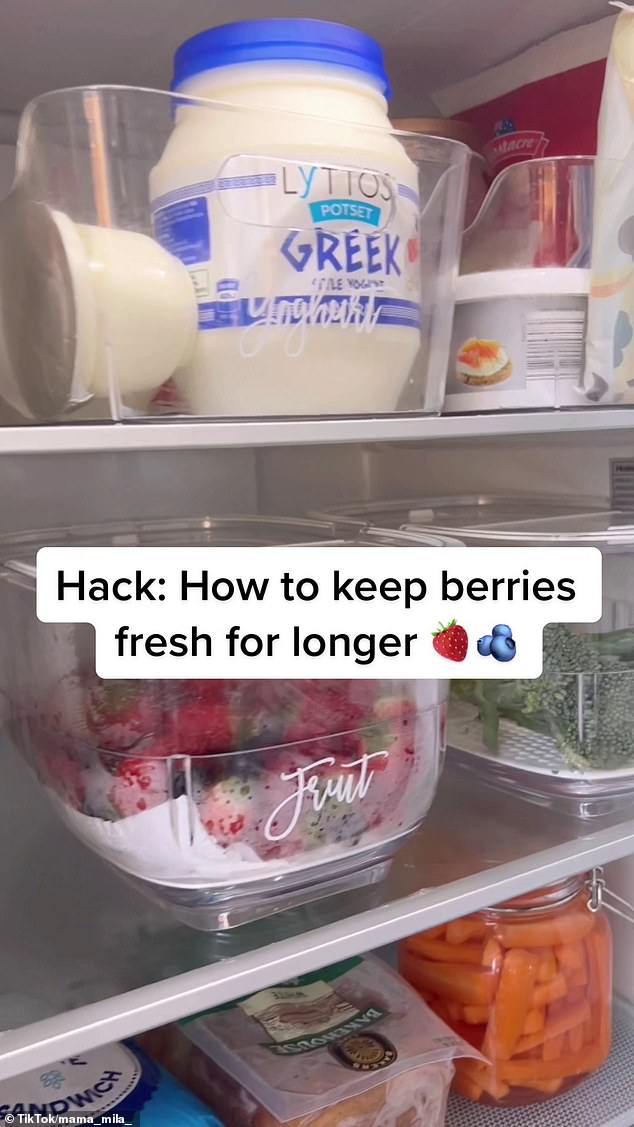 Chantel starts by combining a quarter of a cup of vinegar and three quarters of a cup of water in a bowl.

She then soaks her berries in the mix in the bowl for 10 minutes to ‘rid spores and bacteria’ revealing the amount of dirt left behind in the solution.

The ‘home hacks’ guru rinses the fruit in water then leaves them to air dry on a clean tea towel.

Chantel places a few sheets of paper towel at the bottom of an airtight container to absorb moisture, puts the berries on top, seals the lid and stores in the fridge. 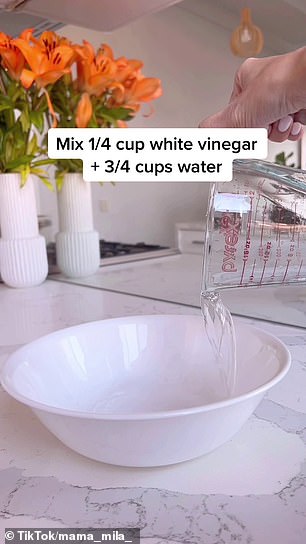 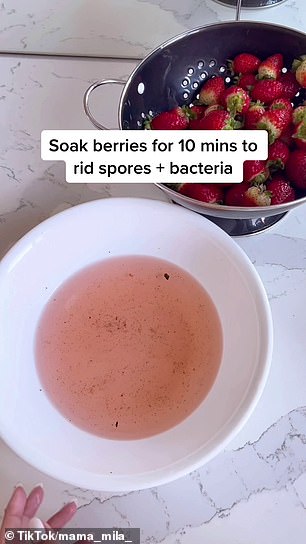 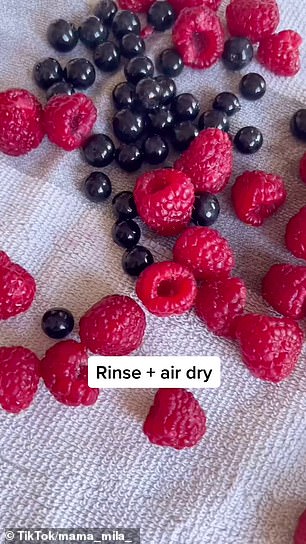 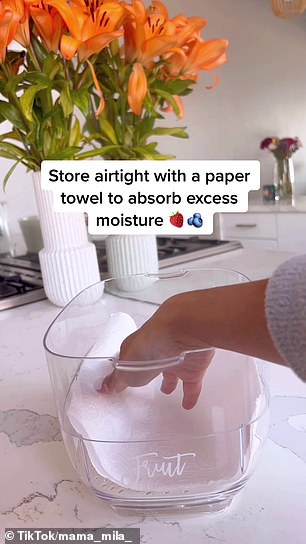 Chantel rinses the berries and lets them air dry on a clean tea towel. She then stores them in an air tight container in the fridge with a few sheets of paper towel to absorb moisture

‘Store dressings separate from your salads until you’re ready to eat – it’s the dressing that makes your salad soggy,’ Katie said.

‘Lastly, add a square of paper towel to your salads to absorb any moisture and keep your greens crunchy and fresh.’

The clip has been viewed tens of thousands of times with dozens of fans in the comments praising the helpful tips and offering their own food storage hacks.

‘I’ve been told to put berries in mason jars in the fridge to keep them fresher for longer,’ one viewer advised.

Another user said she sprays olive oil on chopped avocado to prevent it from going brown.