Ilhan Omar claims the U.S. commits ‘crimes against humanity’ and engages in ‘unthinkable atrocities’ like those carried out by Israel, Hamas, Afghanistan and the Taliban

Ilhan Omar compared Monday actions the U.S. has taken to the ‘unthinkable atrocities committed’ by terrorist groups like Hamas and The Taliban.

‘We must have the same level of accountability and justice for all victims of crimes against humanity,’ the Minnesota Democratic congresswoman wrote on Twitter.

‘We have seen unthinkable atrocities committed by the U.S., Hamas, Israel, Afghanistan, and the Taliban,’ Omar continued, lumping in the U.S. and Israel with terrorist organizations.

Omar’s office did not immediately respond to a request on what specific ‘atrocities’ she is referencing in her tweet with which the U.S. has engaged.

The member of the so-called ‘squad’ of progressive lawmakers included a clip in her tweet where she questioned Secretary of State Antony Blinken as part of a Monday House Foreign Affairs Committee hearing on the State Department’s budget request and foreign policy strategy.

Her line of questioning, unlike her tweet, did not include her grouping America with terrorist organizations.

Representative Ilhan Omar likened U.S. and Israeli actions to the ‘unthinkable atrocities committed’ by terrorist groups like Hamas and the Taliban 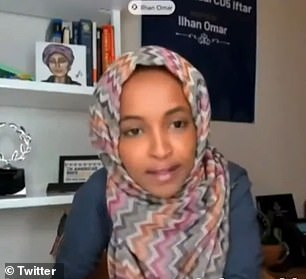 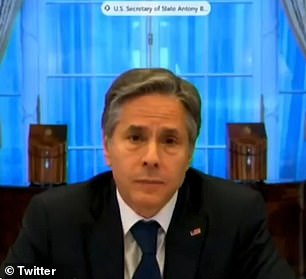 In her tweet, the Minnesota congresswoman included a clip of her line of questioning with Secretary of State Antony Blinken during a hearing Monday. The questioning did not include lumping in the U.S. with terrorist organizations

Instead, she asked Blinken how the U.S. plans to help people in areas where war crimes are being committed by Hamas and the Taliban, including places like in Israel, Palestinian territories and Afghanistan.

‘I asked [Secretary Antony Blinken] where people are supposed to go for justice,’ Omar tweeted of her line of questioning.

The American-Somali congresswoman’s comments come shortly after a ceasefire was called between Israel and Hamas, operating in Gaza, following an 11-day deadly conflict.

More than 250 people were killed in the conflict and thousands others were injured.

Democrats criticized President Joe Biden’s administration for not being tougher on Israel and sending more humanitarian aid to Palestinians.

After working behind the scenes on a ceasefire between the two entities, Biden assured he is focused on the two-state solution so Israel and Palestinians both have their own land.

Republicans, however, were critical of the president not doubling-down on America’s commitment to defending Israel.

Omar and other ‘squad’ members, Representatives Alexandria Ocasio-Cortez and Rashida Tlaib, have been vocal about their support for Palestinians and critical of Israel.

Tlaib is the first woman of Palestinian descent to be elected to the U.S. Congress.

Last month, Omar accused Israel of committing ‘war crimes’ in the conflict between the Jewish state and Hamas, which ws operating in Palestinian territory of Gaza. 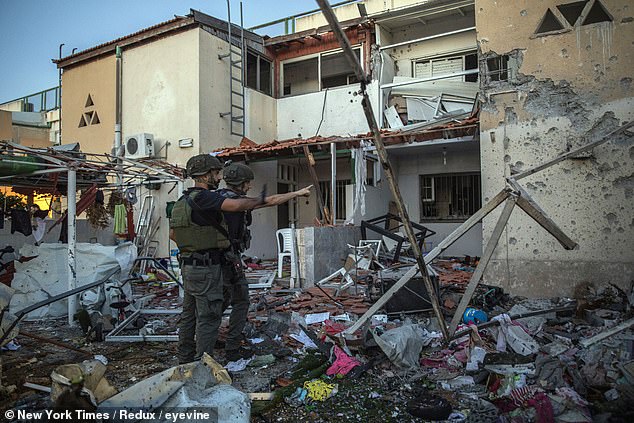 Omar’s comments come after an 11-day conflict between Israel and Hamas operating in Gaza, which saw more than 250 people be killed, thousands others injured and millions in damages

‘We should all be grateful that a ceasefire will prevent more civilians and children from being killed,’ Omar tweeted in May. ‘But now what? We need accountability for every war crime committed.’

‘And we need to stop underwriting crimes against humanity while doing nothing to end the occupation,’ she added.

During the 11-day conflict last month, thousands of missiles were fired at Jerusalem and Tel Aviv – along with other areas in Israel – from Gaza.

Israel’s Iron Dome defense system went into action and the country retaliated with missiles of their own aimed at areas where they believed Hamas was operating – like a media building.