AJ Pritchard appeared to throw shade at Strictly Come Dancing as he was confirmed as a campmate for this year’s upcoming edition of I’m A Celebrity… Get Me Out Of Here! on Sunday.

The professional dancer, 26, who reportedly tested positive for coronavirus just days before starting the ITV hit, enthused about his upcoming journey on ‘an even better show’, eight months after his exit from the BBC competition programme.

Ballroom star AJ said: ‘Doing I’m A Celebrity is a childhood dream come true,’ explains AJ. I was so excited to watch the return of Strictly this Autumn but now I am going to be on an even better show! I can’t wait!

‘I am going to be on an even better show!’ AJ Pritchard appeared to throw shade at Strictly as he was confirmed as a campmate for this year’s upcoming edition of I’m A Celebrity

‘People see me on Strictly with fake tan and sparkles but nobody knows me. It will be nice for people to see me and get to know who I am. I am unbelievably competitive and whatever the challenge is, I will go for it.

‘I will give everything 110 per cent. I really appreciate life and I never take anything for granted. I will be trying to come back with all the stars every single time and if I don’t, I think I will be disappointed.’

The choreographer shocked fans when he announced his departure from Strictly – the show that made him famous – following a four-year stint.

On still keeping in contact with his former co-stars, the TV star told ITV: ‘I think my friends from Strictly like Neil Jones and Janette Manrara are going to watch, which is really nice. 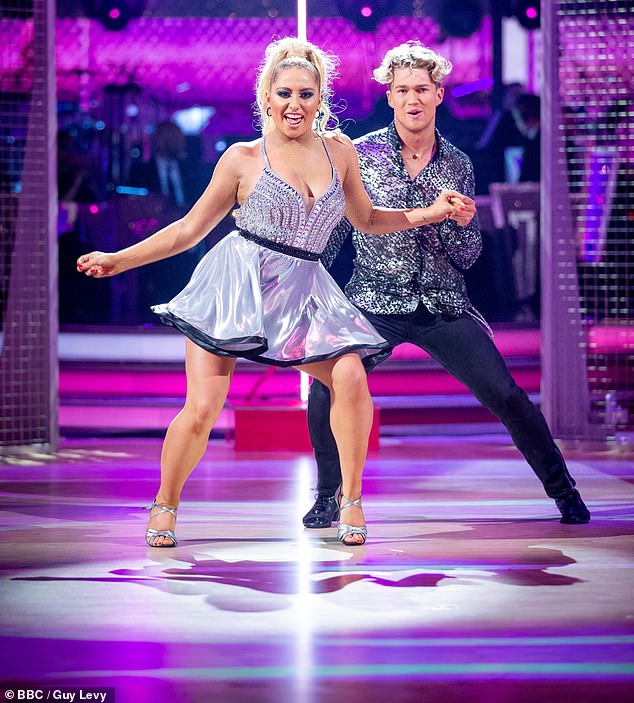 In the past: The dancer, 26, enthused about his journey on ‘an even better show’, eight months after his exit from the BBC competition programme (pictured in 2019 with Saffron Barker) 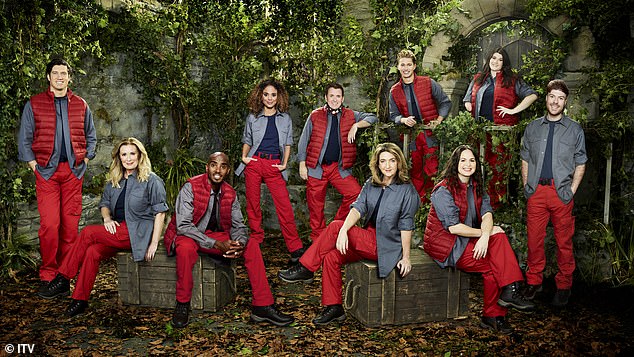 ‘They have always known how much I have wanted to do this programme as I have talked about it all the time!’

When asked whether he’d like to be crowned King of the Castle, AJ admitted he’d love to win the survival show, after failing to lift the Glitterball trophy.

The media personality also shared how he’d like to tap into the world of presenting with his brother Curtis, 24, in the near future.

AJ added: ‘My push is to do more TV presenting with my brother, Curtis. We’ve done things on Lorraine but we would love to have our own TV show together. 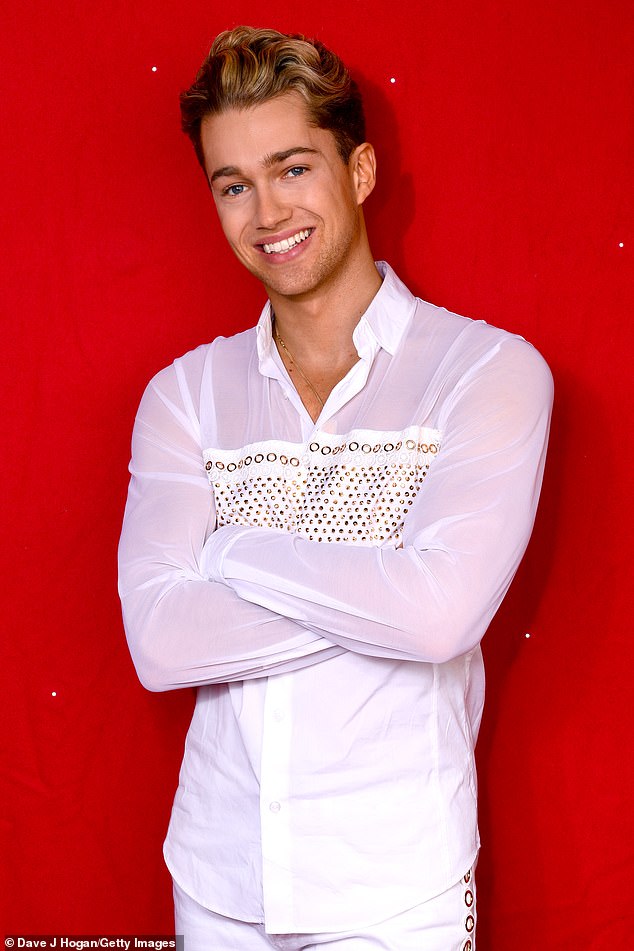 Spanner in the works: The media personality reportedly tested positive for coronavirus just days before starting the ITV hit 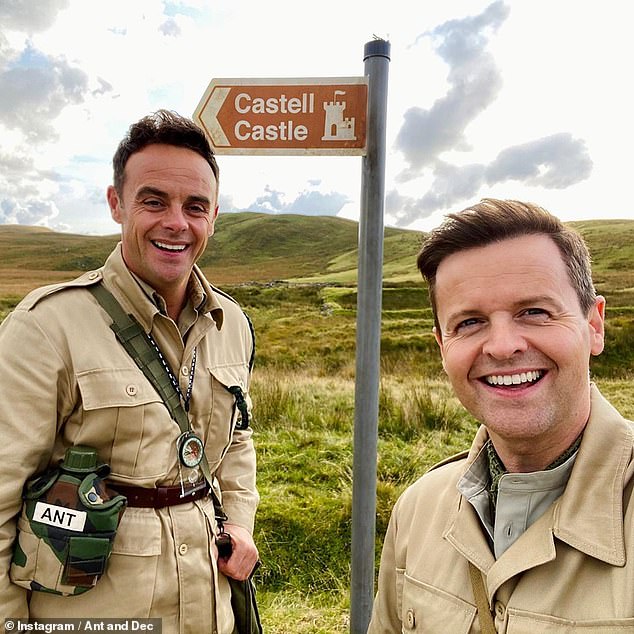 Protocol: The hunk had a routine test along with the other contestants ahead of the new series (hosts Ant and Dec pictured in North Wales last month)

‘He is so excited and he can’t wait for everyone to see me in there. We’ve got a podcast now and he will be talking about me on that too!’

The hunk, meanwhile, has reportedly thrown the survival show into chaos by testing positive for the virus.

According to new reports, the dancer had a routine test along with the other contestants and is believed to be ‘shocked’ as he has been ‘feeling fine’ after following the precautions set out.

The source told The Sun: ‘Everyone is on tenterhooks. Like the other contestants AJ had a routine Covid test, which came back positive. He will have another one before going in. 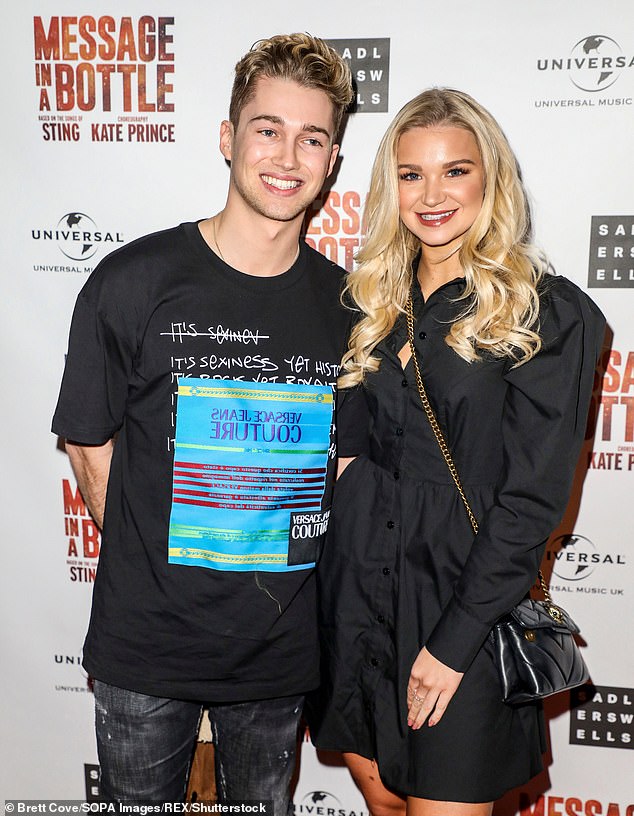 Preparations: The professional dancer is isolating near Gwrych Castle in North Wales with girlfriend Abbie Quinnen (pictured in February)

‘The ITV production team have gone to incredible lengths all year to make sure everything is carried out safely and with as minimal risk to the cast and crew as possible.

‘There is little room for error. If several stars are struck down, particularly one of the older ones, then it would throw the whole show into jeopardy and be very problematic.’

The TV star, who is isolating near the Welsh set with his girlfriend Abbie Quinnen, is believed to be earning £50,000 for his participation.

MailOnline contacted representatives for AJ for further comment at the time of publication.

The 20th series of the long-running ITV show is set to begin on Sunday November 15 and run for three weeks.

The ITV programme has seen the show relocate for the first time from the jungles of Australia to North Wales’ Gwrych Castle due to travel concerns sparked by the COVID-19 pandemic.

Claim to fame: The most successful British track athlete in Olympic Games history

Phobias: Any animal that moves

Biggest misconception you want to dispel in the castle: It will be nice for people to see me doing something other than running

Role in the camp: Cook

Miss most: Coffee, my wife and children

Phobias: Human faeces. If I see one, it is over! I am hoping the camp toilet will be enclosed

Biggest misconception you want to dispel in the castle: Nothing. I don’t think I am that interesting

Role in the camp: Person who will muck in with anything

Miss most: My family and routine at home

Biggest misconception you want to dispel in the castle: People think I am glamorous as I have played Liz for so long but I am not

Role in the camp: Cleaner

Miss most: Dogs and my husband, Jon

Dream campmate: Ricky Gervais – he would keep us all going

Biggest misconception you want to dispel in the castle: People see me with sparkles and fake tan but nobody knows what I am like

Role in the camp: Keeping spirits up and the cleaner

Miss most: My warm and comfy bed

Dream campmate: Any celebrity with an intriguing background

Biggest misconception you want to dispel in the Jungle: I think I have always been the same throughout my career – so I don’t have any.

Role in the camp: Person to keep spirits up.

Miss most: My family.

Dream camper: Anybody who has won the Super Bowl!

Phobias: I am not a fan of spiders or confined spaces and I don’t know what I am going to be like when I get there!

Biggest misconception you want to dispel in the castle: I don’t think I have any as people just know me as the news and current affairs person!

Role in the camp: Shoulder to cry on.

Miss most: My boys, husband, dog and Mum.

Dream campmate: Madonna, Gary Lineker and Jamie Oliver to cook for us. I think you could have some really geeky chats with them!

Claim to fame: Author and podcaster

Phobias: Heights. My legs go wobbly and you can’t rationalise it

Biggest misconception you want to dispel in the castle: I am not that controversial so nothing

Role in the camp: Mum, friend and the giver of hugs

Miss most: My husband, Tom, and my three children

Dream campmate: The Queen, Judi Dench and Ant Middleton so he can help us with all the survival skills

Phobias: Arachnophobia, fear of heights –just about every phobia

Biggest misconception you want to dispel in the castle: It will be nice for people to see me for who I am rather than my EastEnders character

Role in the camp: Chatterbox and little sister

Miss most: My daughter. It’s going to be the longest we’ve been apart

Dream campmate: Denzel Washington would be awesome. I would listen to every word he said

Phobias: It’s just easier to say what I am not scared of. I have so many phobias

Biggest misconception you want to dispel in the castle: On my Radio 1 show, I am always bubbly and energetic but everyone has down moments too, so it will be nice for people to see what I am really like

Role in the camp: Entertainer and the tidy up person –I love a tidy house

Miss most: A nice cool pint of Guinness

Dream campmate: Barack Obama and Liam Gallagher. He would be great entertainment value

Biggest misconception you want to dispel in the castle: I don’t want it to focus on my disability

Role in the camp: Cook/shoulder to cry on

Miss most: My boyfriend, food and my cats