I’m A Celebrity castle REVEALED: Upcoming series will be filmed at haunted Gwrych Castle in Wales

This year’s I’m A Celebrity campmates will not only have to deal with a colder climate and a tin bathtub, but also with staying in a 200-year old haunted castle.

It was revealed on Friday that the hit show will be filmed in Wales and not the usual venue in Queensland, Australia, because of coronavirus.

And now it appears that ITV have secured Gwrych Castle folly, a Grade I listed country house in Abergele, North Wales, at the cost of £1million, reports The Sun.

Spooky: ITV are said to have secured Gwrych Castle folly, near Abergele in Wales, for I’m A Celebrity…Get Me Out Of Here! (pictured is the castle ruins)

A source on the ITV show said: ‘Producers are chuffed with the new location — they’re excited for a change in scenery this year.

‘The Bushtucker trial crew, who work tirelessly all year round, have been working overtime to come up with some terrifying new trials and challenges.

‘Not only will there be creepy crawlies galore, but now they have the added aid of playing with a haunted castle. They think it will make for brilliant TV.’

As only fitting with the new location, this year’s trials are thought to be incorporating the spooky setting and there will be cameras around the castle to capture any paranormal activity. 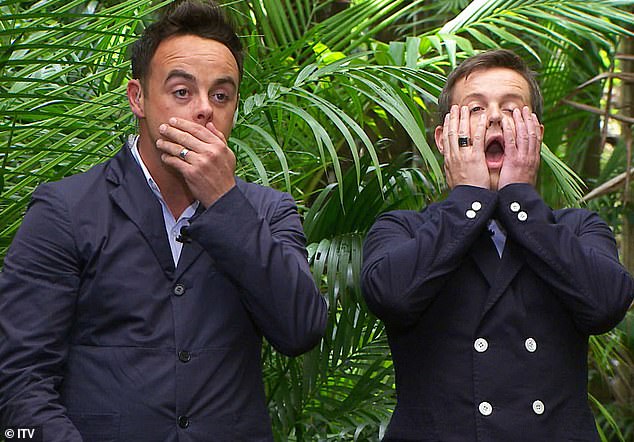 ‘Terrifying’: In keeping with the venue, bosses are already thought to be planning some scary challenges and looking at having a medieval theme (Ant and Dec are pictured in 2019)

It has been suggested that ITV will include a medieval theme, with celebs possibly having to joust for dinners or even spend time in a dungeon or mock-up gallows.

The castle is thought to be haunted by a number of spirits, including previous owner the Winifred Hesketh, the Countess of Dundonald who died in 1924.

Legend says she is angry at her husband for taking all of her former homes’ valuables, with some people claiming she, or another spooky spirit, stalks the area in a white dress.

Some locals also believe that the spirit of a servant girl who died falling off a horse haunts the land. While others say ghosts of former caretakers have been seen around the 200-year-old castle which boasts 250 acres. 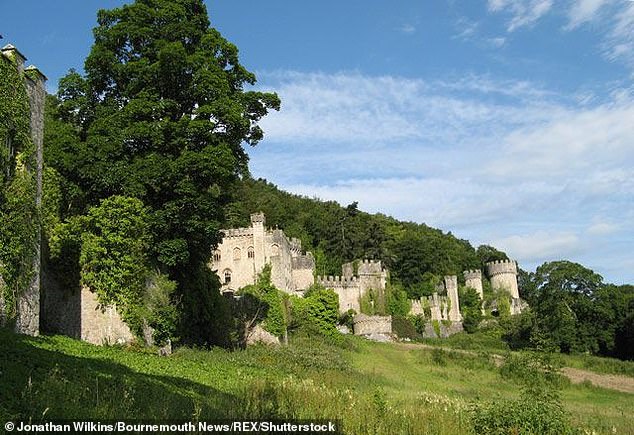 Ruins: The castle was built between in the early 1800s but hasn’t been occupied for many years, with lots of the space now looking derelict (pictured is Gwrych Castle) 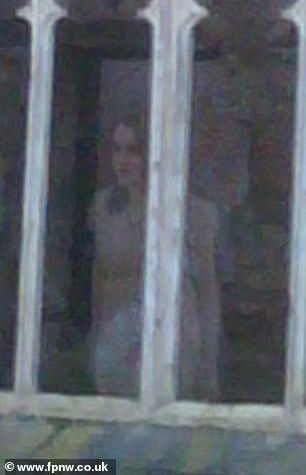 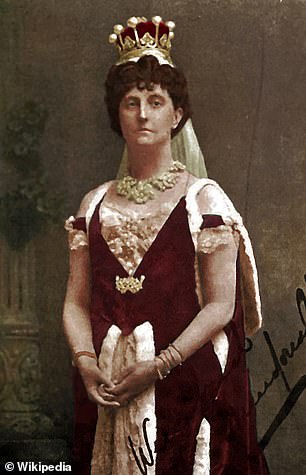 Ghosts? The castle is said to be haunted by the Countess of Dundonald (right) with other visitors reporting they have seen a woman in white on the grounds (left, a pictured from 10 years ago) 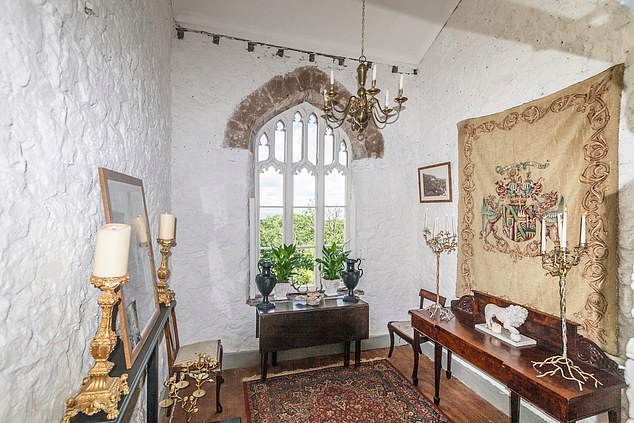 Different look: Viewers will have to adjust to the castle aesthetics instead of the jungle camp site this year (pictured is one of the castle’s rooms)

Gwrych Castle hasn’t been lived in for years and was built by Lloyd Hesketh Bamford-Hesketh in the early 1800s.

During World War Two around 300 Jewish refugees lives at the castle however it has fallen into disrepair in recent years, reports the BBC.

The series, which usually returns to TV screens in November, will certainly look different when it comes back this year.

While viewers have become accustomed to seeing celebrities boost their careers by donning bikinis and going shirtless as they sweat out in the Jungle, the new batch will likely need to pack thermals for the new series. 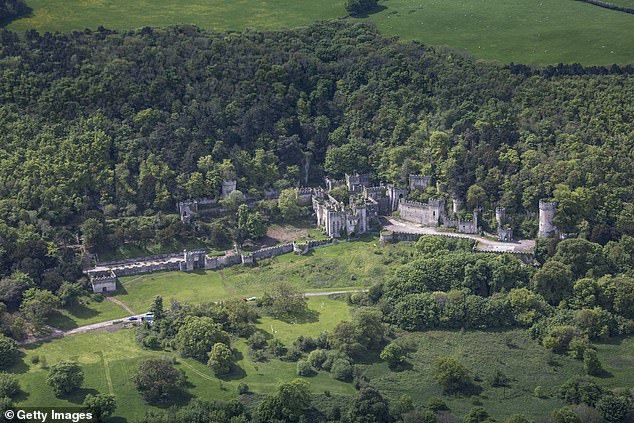 Watch out: Other ‘spirits’ said to haunt the grounds include former caretakers and a servant girl who died after riding a horse

And as the stars settle into their temporary digs, they will no longer get the opportunity to luxuriate in the daily delight of an outdoor shower, as they will now be bathing in a primitive tin tub, according to The Sun.

Restrictions due to the COVID-19 pandemic forced ITV to switch locations and has resulted in major changes to production, affecting everything from what food challenges stars will do to where they will sleep during filming.

While creepy crawlies such as witchetty grubs have been a mainstay on the Australian menu, dining in north Wales will have more of a local flavour, as it’s been reported their eating challenges will include sheep’s testicles.

And longtime hosts Ant McPartlin and Declan Donnelly are sure to have their tongues tied when they return to filming, as they’ll be based in a village called Llanfair­pwllgwyngyll­gogery­chwyrn­drobwll­llan­tysilio­gogo­goch. 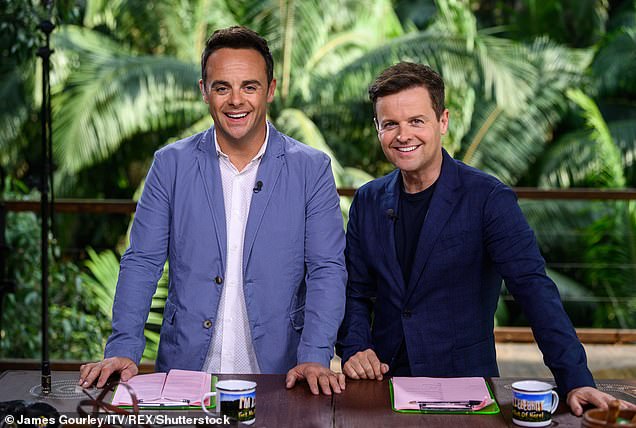 Changes: This year’s series of I’m A Celebrity will be filmed in the north of Wales, with the show making some major changes to the usual set up

The change of location means a change of weather for contestants who will have to battle 8.5C (47.3F) temperatures and winds, a stark contrast to the blistering heat in the Australian jungle 22C (71.6F).

Contingency plans will be put in place to combat drastic weather changes, including make shift huts when they need protection from the elements.

Family and friends will also miss out on the opportunity to travel abroad and stay in a luxury hotel as they support their loved ones from the sidelines. 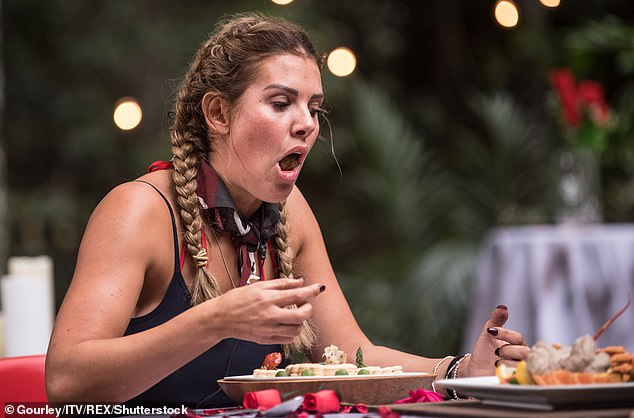 That’ll be interesting! The bushtucker trials will also be adapted to include local delicacies and things such as sheeps testicles (pictured is Rebekah Vardy in 2017) 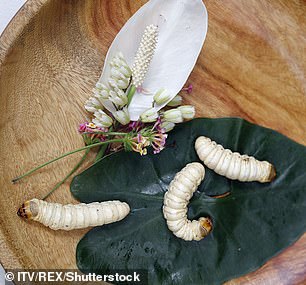 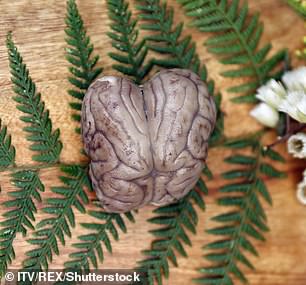 Fine dining: Witchetty grubs and lamb’s brain have been among the stomach-churning dishes on offer in the past. With the show moving to Wales, the culinary offerings are expected to have something of a more local flavour

Even the stars’ I’m A Celeb kit will have a familiar look, however they will have to wear thermal layers to keep them warm underneath in the cold Welsh winter.

Despite all the changes, it has been suggested that relocating to Wales could save ITV a considerable amount of money, which could then be used to get bigger-name stars.

Although the broadcaster will still have to convince them that spending three weeks in the cold countryside is as doable as three weeks in Australia.

Following the news that filming for this year’s I’m A Celeb will be moving to Wales, fans took to Twitter in droves to share their reactions, with many taking on a comedic tone.

Wrote one: ‘If I’m a celebrity is being made in the UK this year what ‘critters’ will they terrify the contestants with – wasps, moths and pigeons?’

‘So I’m A Celebrity is going to be in Britain,’ stated another. ‘So trials will involved sharing a fly tipped chest freezer with a mildly disgruntled stoat and eating tripe.’

Speaking on Friday after the show’s move to the UK was confirmed Kevin Lygo, ITV’s Director of Television said: ‘We announced last week that we were doing all we could to make the series and I’m thrilled that we can bring the show to viewers albeit not in the jungle.

‘We have a great team both on and off screen and I know they will produce a hugely entertaining series.’ 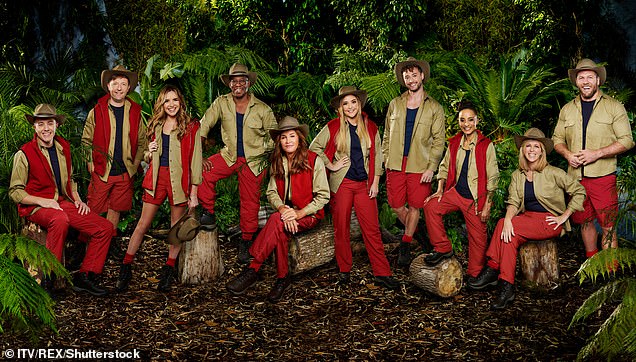 Up in the air: Insiders were unclear whether the show would go ahead later this year after the TV industry was thrown into chaos by COVID-19 (the 2019 cast are pictured)