She caught serious attention with her impressive bikini body when she hit the famous jungle shower during the 2017 series of I’m A Celebrity… Get Me Out Of Here!

And Rebekah Vardy proved she was more confident than ever on Wednesday, as she stripped to another skimpy two-piece to relax on the beach in Dubai.

The mother-of-four, 35, showed off her enviably slender frame in bright yellow swimwear as she topped up her tan and frolicked with her children during their relaxing family getaway. 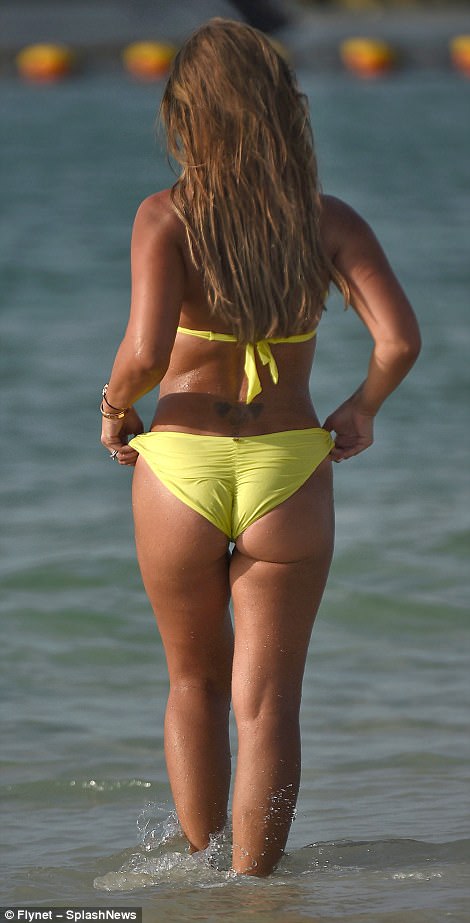 Bikini babe: Rebekah Vardy proved she was more confident than ever on Wednesday, as she stripped to another skimpy two-piece to relax on the beach in Dubai

The TV star set pulses racing in the tiny yellow bikini, which plunged deeply at the chest to give a glimpse of her ample cleavage to all.

Pulling into a single strap at the back and cutting off just below her bust, the top left her enviably slim waist and plenty of sun-kissed skin on show as she paraded her figure on the beach.

She paired the top with equally skimpy bottoms, which fell comfortably across her hips but cut to a daring height at her rear, to flash her peachy derriere to all.

Leaving her hair in loose waves and opting to go make-up free, Rebekah let her clear and glowing complexion take centre stage as she relaxed in the blazing sunshine. 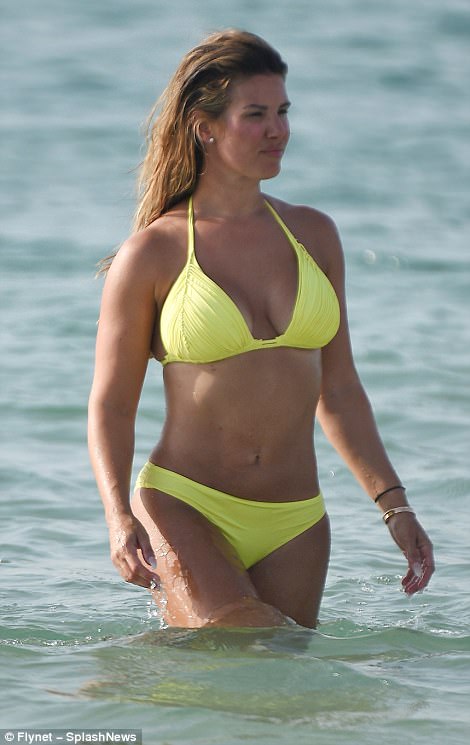 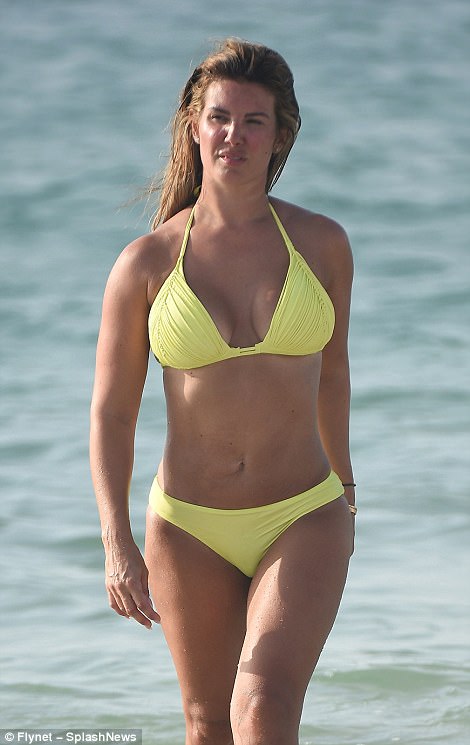 Toned: Pulling into a single strap at the back and cutting off just below her bust, the top left her enviably slim waist and plenty of sun-kissed skin on show as she paraded her figure on the beach 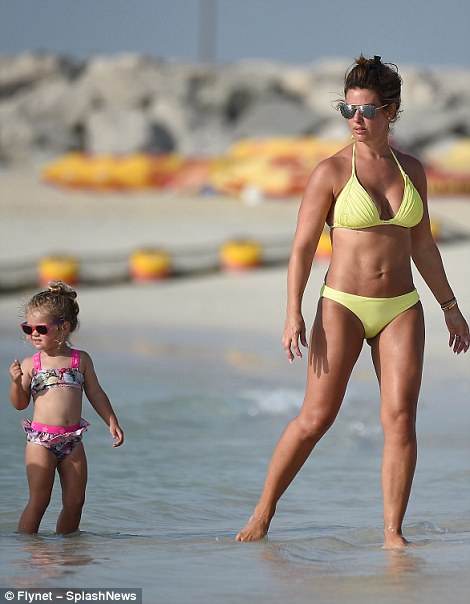 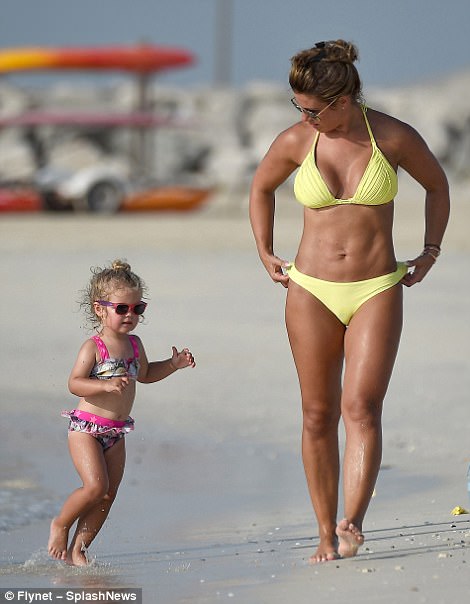 Radiant: Leaving her hair in loose waves and opting to go make-up free, Rebekah let her clear and glowing complexion take centre stage as she relaxed with daughter Sofia, two

First strutting her stuff on the beach, the beauty later joined daughters Megan, 11, and Sofia for a few games in the shallows – and was seen laughing with glee as she swung her two-year-old high into the air.

Rebekah appeared to be in good spirits as she played on the beach with her children, despite husband Jamie not joining them.

The pair first met after Rebekah was hired to organise the Jamie’s birthday party in January 2014 and two-years later the pair tied the knot at Cheshire’s Peckforton Castle on May 25, 2016. 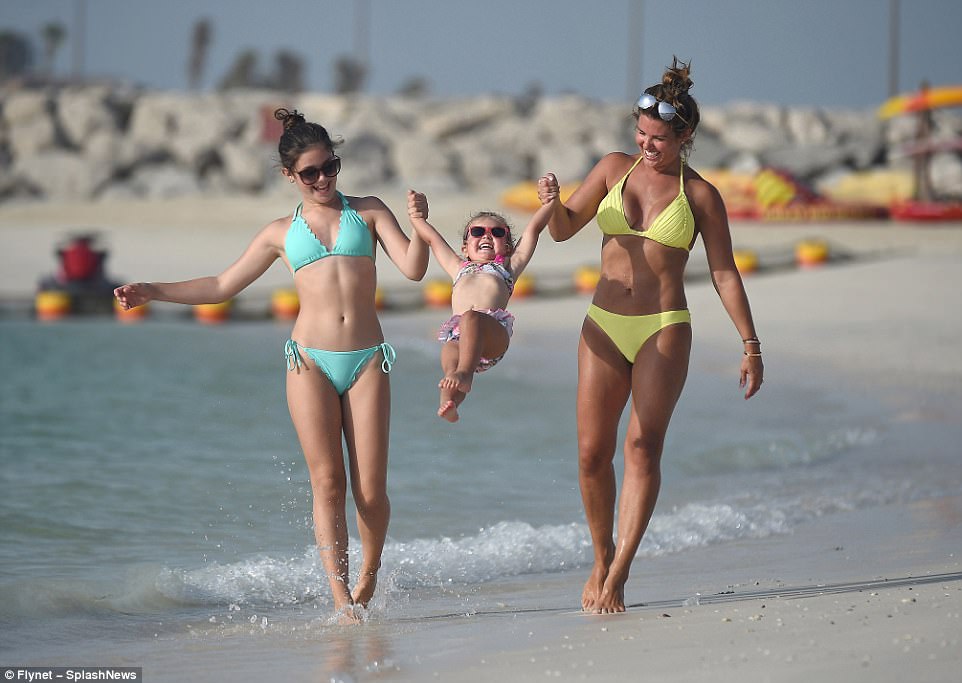 Wee! Rebekah was also joined by her daughter Megan, 11, who playfully helped her mother swing Sofia into the air on the sand 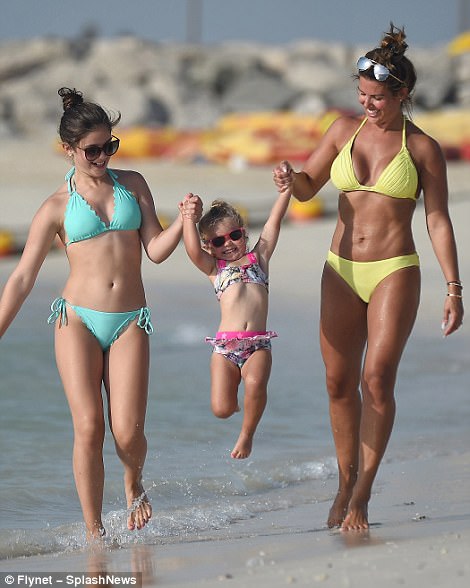 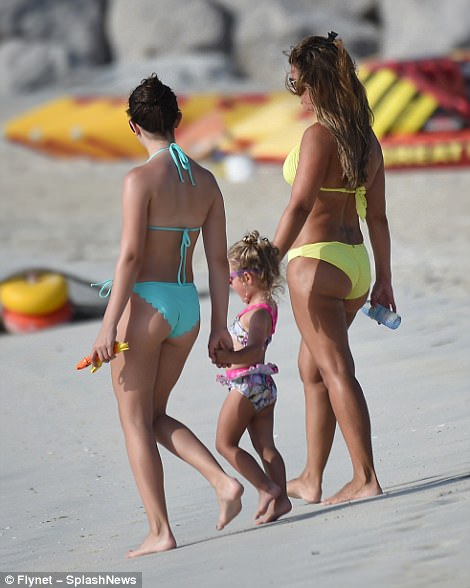 Doting mother: Rebekah is mother to Megan (left) and son Taylor, six, from a previous relationship, while she shares little Sofia with footballer Jamie Vardy 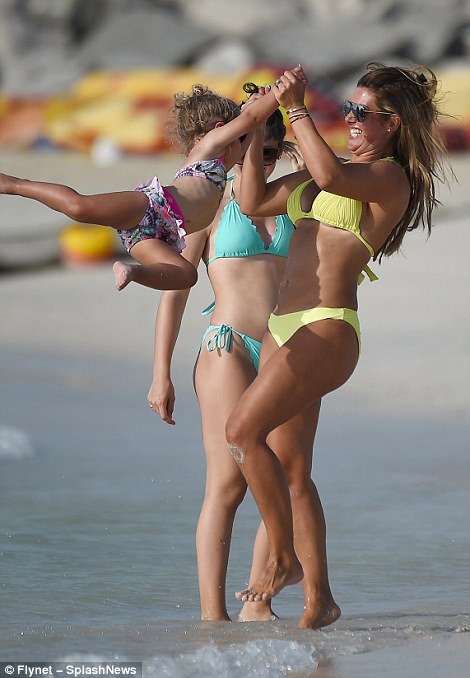 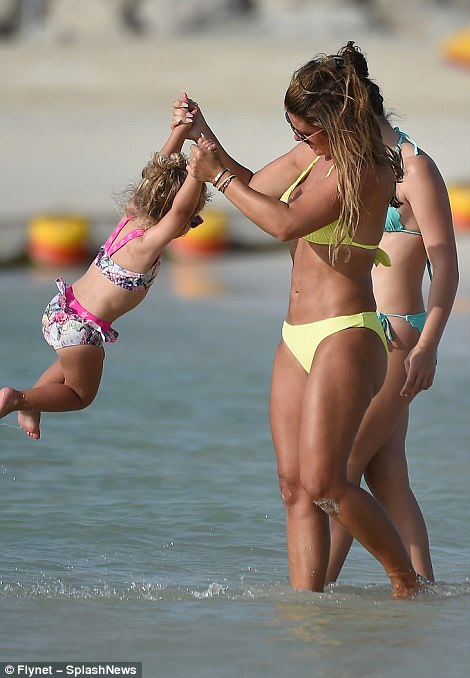 Leading lady: Rebekah rose to higher prominence late last year after appearing on I’m A Celebrity – lasting sixteen days in the jungle, which she credits her one stone weight loss to 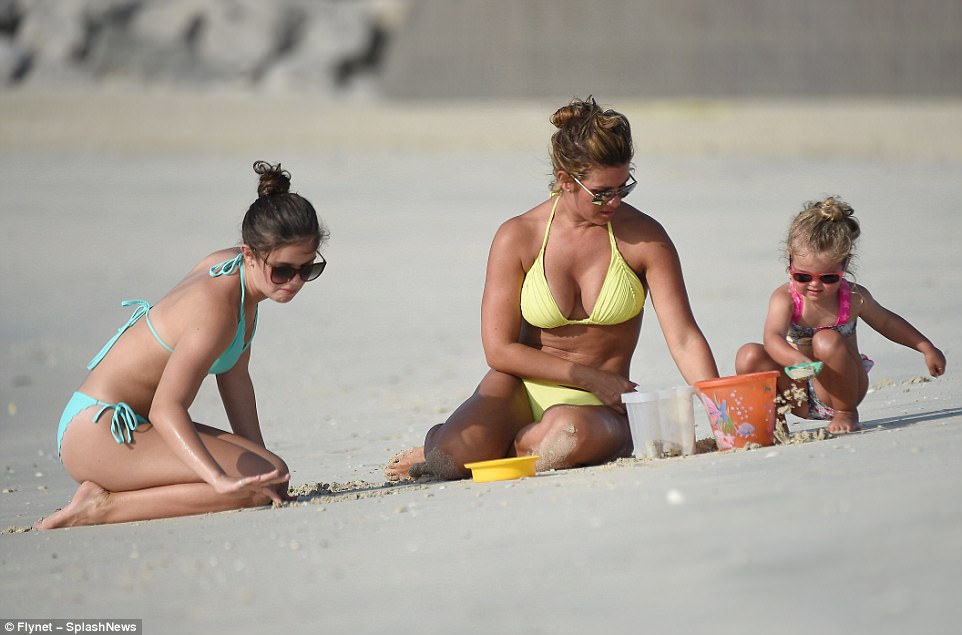 Let’s do this: The girls were later seen retiring to the sand to build a few sandcastles in the sunshine 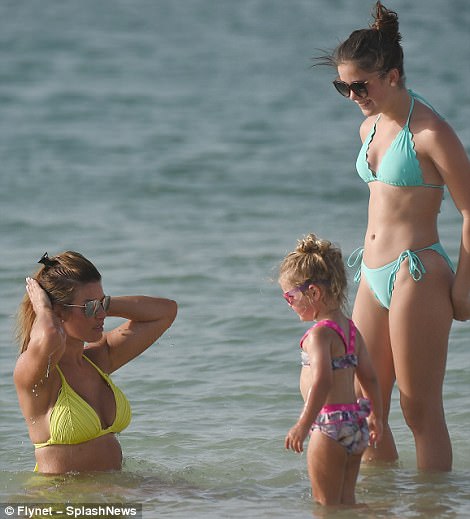 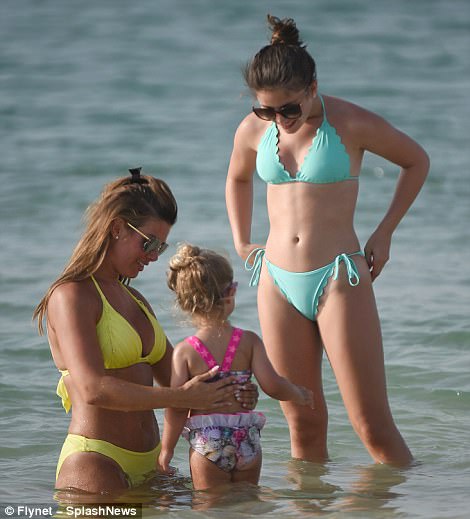 Catching up: The girls chatted and laughed together as they cooled off in the sea

The couple are parents daughter Sofia, two, and their one-year-old son Finley, while Rebekah is mother to Megan and son Taylor, six, from a previous relationship.

Despite her high-profile romance, Rebekah rose to higher prominence late last year after appearing on I’m A Celebrity, and lasting sixteen days in the jungle before she was voted out by the public.

Speaking after the show, the beauty admitted her camp diet of rice and beans meant she lost a whopping stone in weight during her two-week stint. 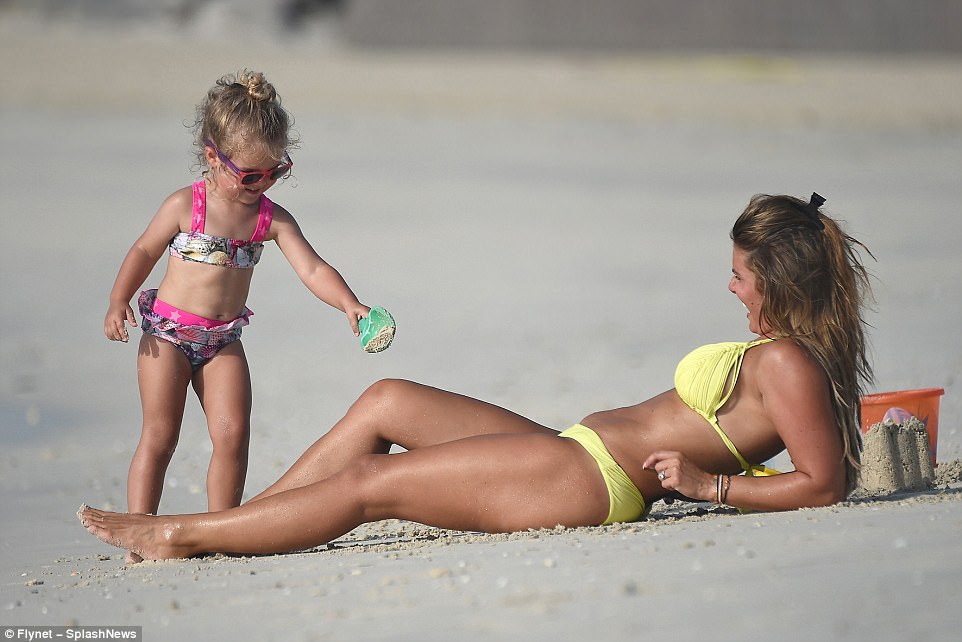 Bronze goddess: Rebekah soon reclined on the sand to top up her tan, while Sofia continued to build sandcastles around her 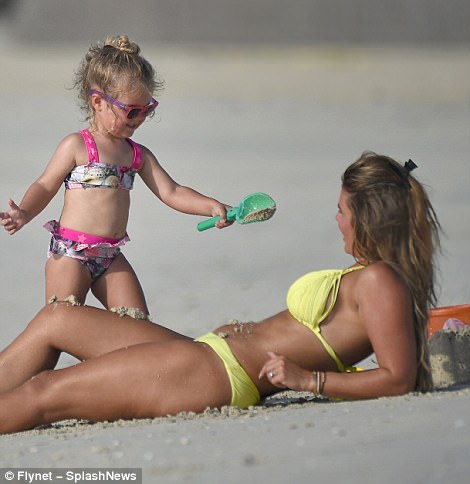 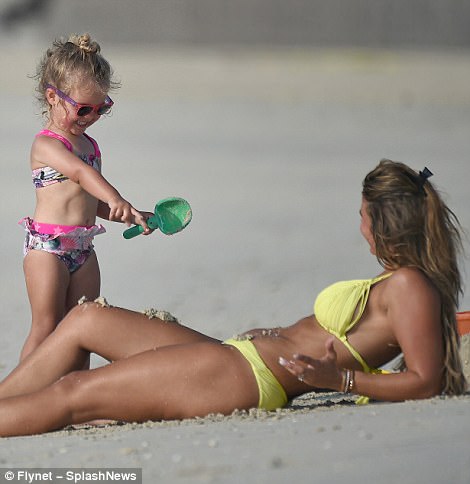 Having a ball: The little girl laughed with glee as she playfully poured sand all over her mother 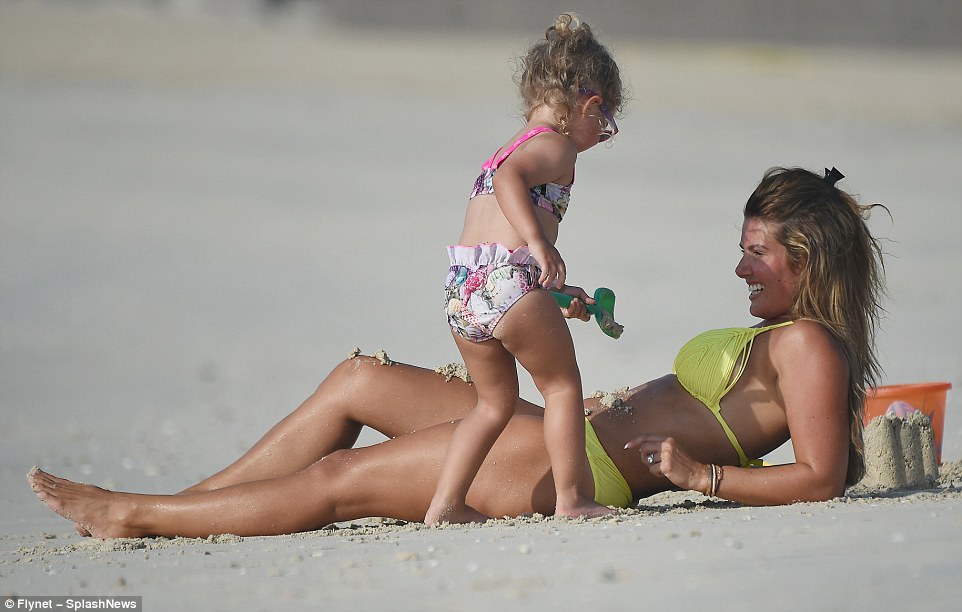 Cheeky: The little girl continued to cover her mother in sand and jokingly start to bury her on the beach 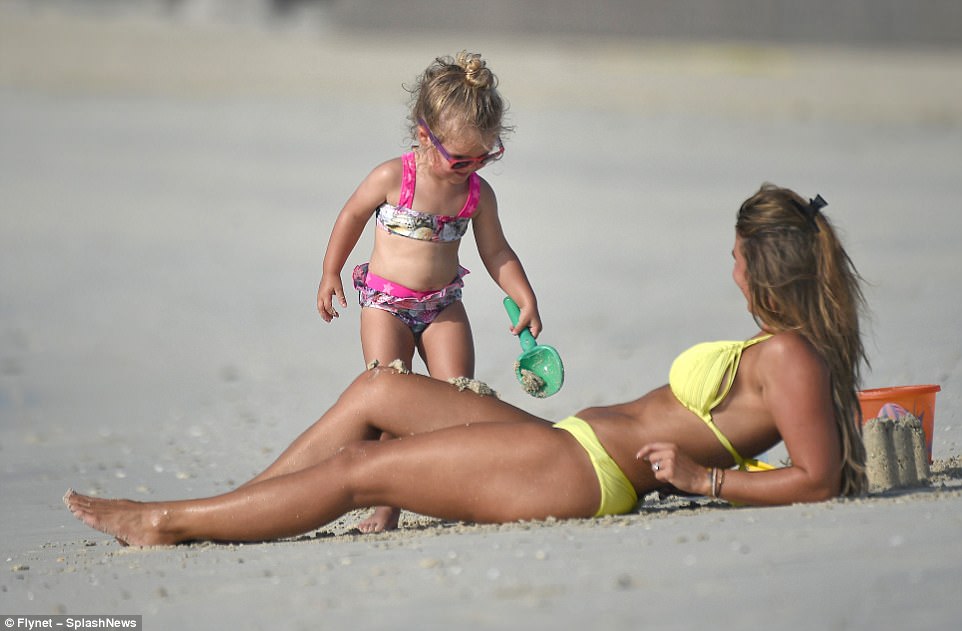 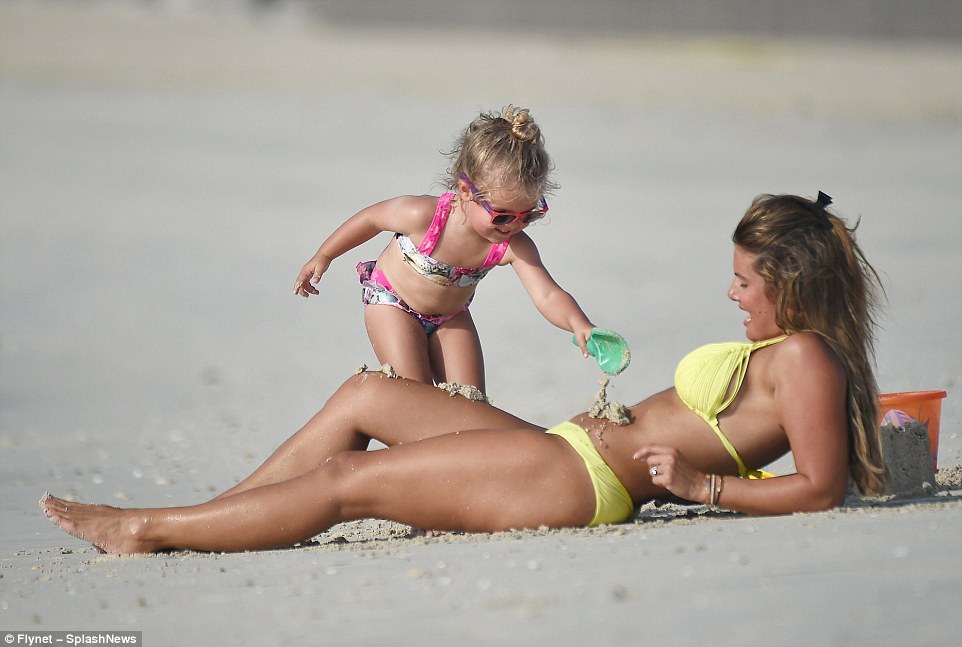 Girly day: She is also mother to one-year-old son Finley with the footballer, but he did not appear to be present for their day at the beach

She reflected: ‘I lost a stone. This is the weight I was before I had any kids. Jamie loves me whatever I look like, but I’m too skinny now.’

Rebekah has attended a number of high profile events since the show, including the National Television Awards – where the ITV reality series picked up the gong for Best Challenge.

While she partied the night away with co-stars Vanessa White, Stanley Johnson and winner Georgia Toffolo, things soon turned sour for Rebekah when she became embroiled in a fight with Sarah Harding.

According to the Mirror, former Girls Aloud star Sarah had accused Rebekah of taking ‘sneaky pictures’ of her, sparking a ‘heated’ row between the pair that caused a ‘huge scene’ at London’s O2 Arena. 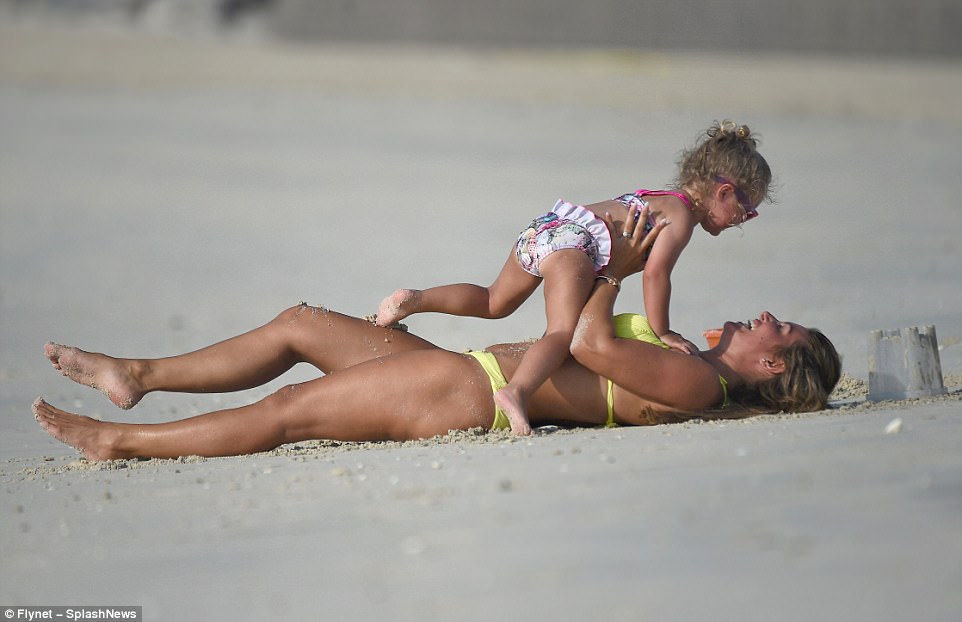 Up she goes! Rebekah pulled a number of funny faces as she lifted her little girl into the air 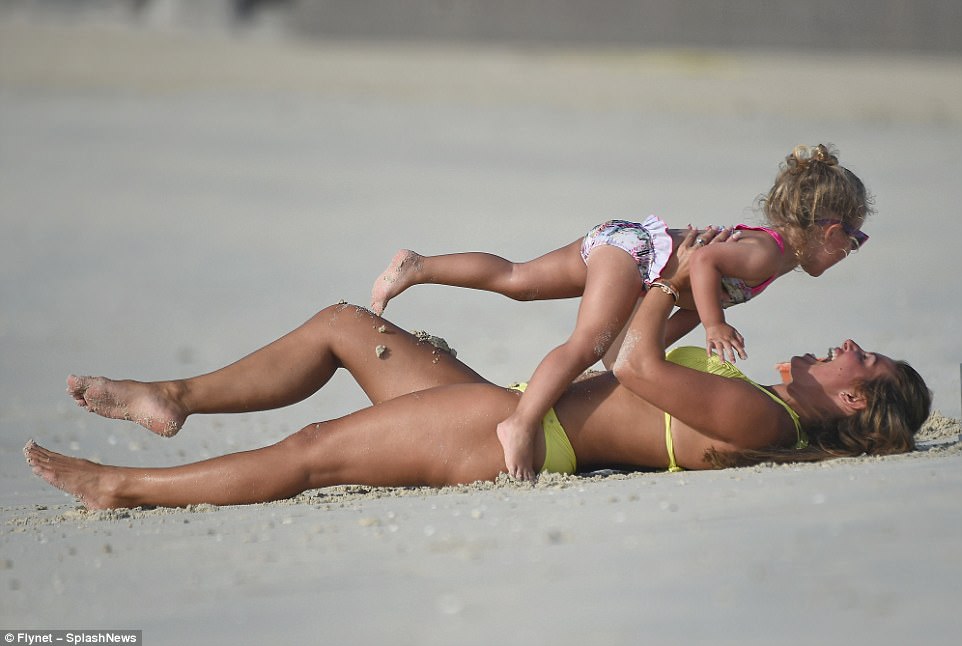 Besotted: The star proved to be every inch the doting mother as she played with her children on the beach 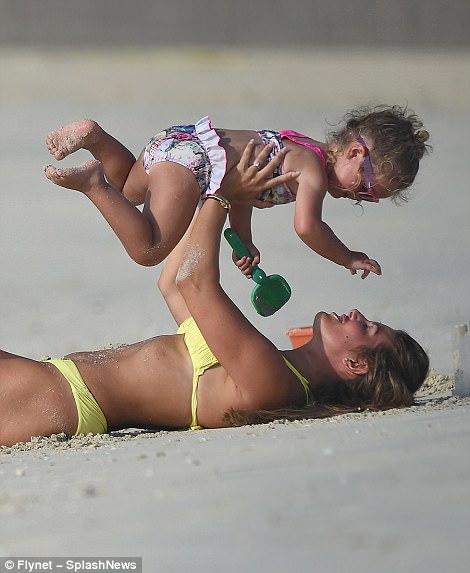 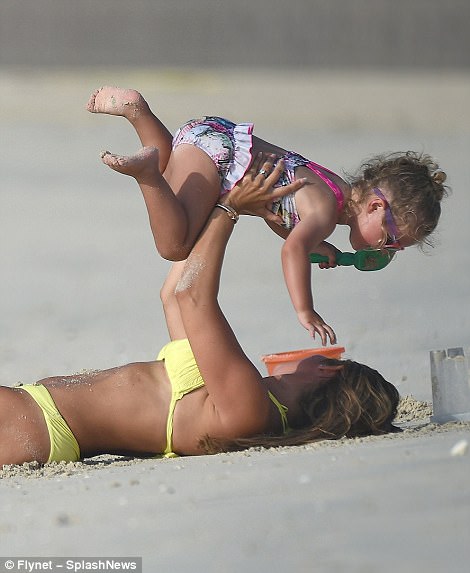 Quality time: Rebekah is no doubt grateful for the time with her kids, after a long stretch apart during her stint on I’m A Celebrity… Get Me Out Of Here! in Australia last year 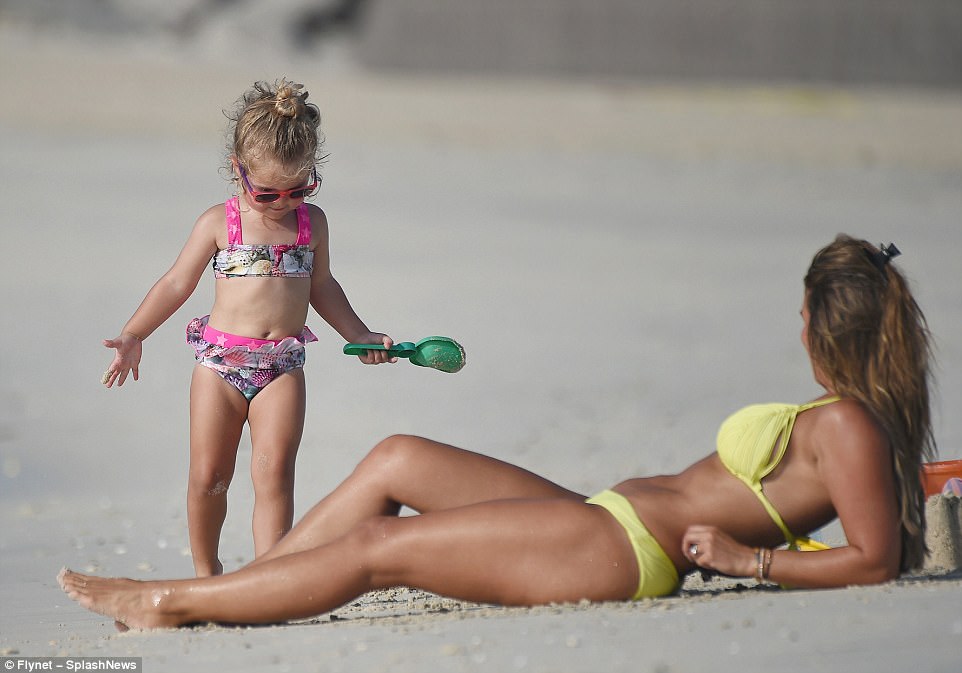 Time to relax: Rebekah jetted to Dubai with her family after enjoying a night out at the National Television Awards at London’s O2 Arena 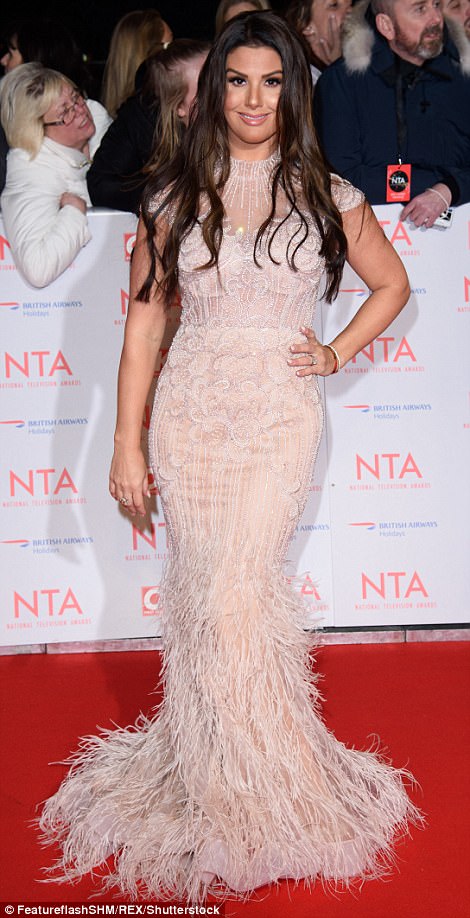 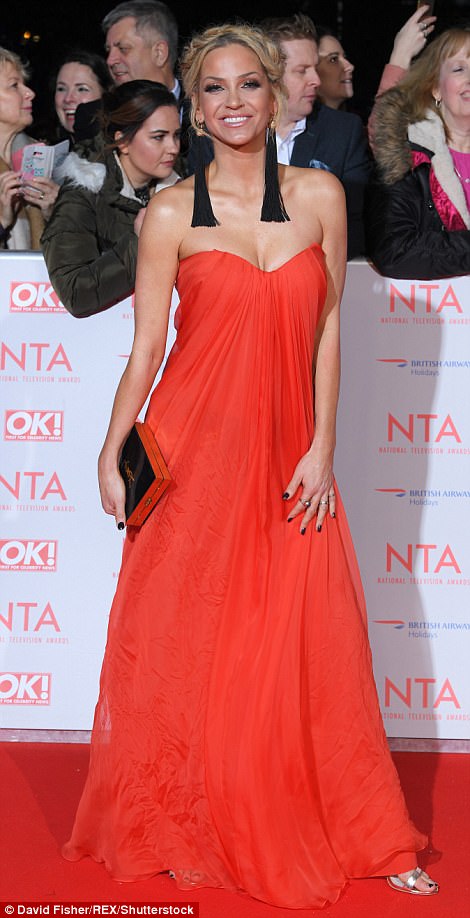 Awkward: However things soon turned sour for Rebekah (L) as she allegedly clashed with Sarah Harding (R) – who accused her of taking sneaky photos of her inside, sparking a ‘huge scene’ inside

Sources claimed that Sarah had dropped her bag inside the bash, and as she proceeded to pick up her belongings from the floor, she saw a camera flash and I’m A Celebrity star Rebekah standing nearby with her phone in her hand.

The insiders continued that Rebekah was left irked by the accusation and insisted that hadn’t been the case, offering to show Sarah her phone, before demanding an apology from the Celebrity Big Brother star.

‘Rebekah couldn’t believe the insinuation and angrily insisted she hadn’t even been using her phone,’ they claimed.

‘A few of their friends had to step in and intervene because they were getting really heated with one another- it caused a huge scene.’ 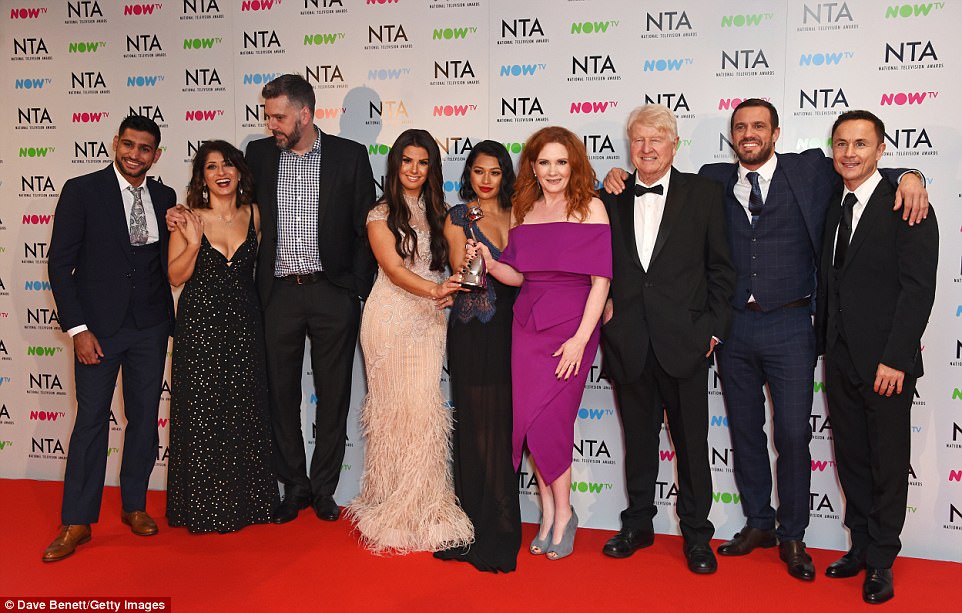