A university student has revealed that although she’s ditched the booze, she still goes on nights out and 3am takeaways, but without the hangovers.

Leilani van Someren, 20, decided to give up alcohol after having ‘negative experiences’ when drunk.

Leilani, from London, had a ‘two drink’ limit and would avoid drinking at parties because she didn’t trust inebriated people her own.

But now in her third year at Queen Mary University of London, Leilani doesn’t drink at all and is president of the Sober Socials Society.

Leilani van Smeren, 20, (left) decided to give up alcohol after having negative experiences while drunk. She is pictured here with Magda, (right) another member of Queen Mary of London University’s Sober Socials Society

Along with the society’s 120 other members, she still participates in everything you would expect a student to do, such as going out clubbing, to parties and exploring the city.

Leilani, a psychology student, said: ‘I used to drink a very small amount – the two glass limit – and I only liked wine.

‘But I never drank with friends or at parties with people my own age because I didn’t trust other people.’

The 20-year-old explained that she doesn’t like the behaviour that is associated with being intoxicated. 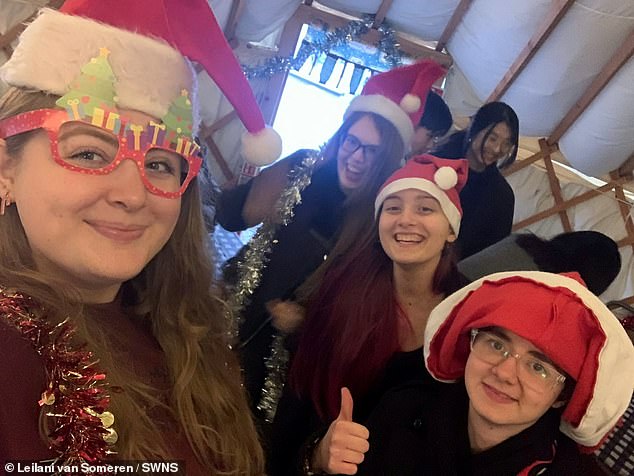 Now in her third year at Queen Mary University of London , Leilani (second from right) doesn’t drink at all and is president of the Sober Socials Society. She is pictured here with three other members at a gingerbread decoration event

She explained: ‘I find it scary as a young woman to think about the things male people can do when they are uninhibited.

‘I look at myself very proudly that I can control my own decisions, and I feel confident that I can step away from situations if anyone pressured me to drink.’

Going further the student believes that by not drinking she has removed herself from drugs and has found a kinder circle of friends.

Leilani has never regretted her decision to stay sober but said that she is not comfortable around drunk people as she fears that that person will ‘step over the line.’

She said: ‘When I went to the [student union] party for the societies committees there were lots of other societies drinking alcohol.

‘We stayed in a small group drinking soft drinks and dancing to the music. It was a lot of fun and I would love for more events to be more intimate.

‘I would love to find more parties like that, just with little or less alcohol so I can feel safe.’

Leilani also suffers from emetophobia – an intense fear of vomiting – which has further deterred her from drinking booze. 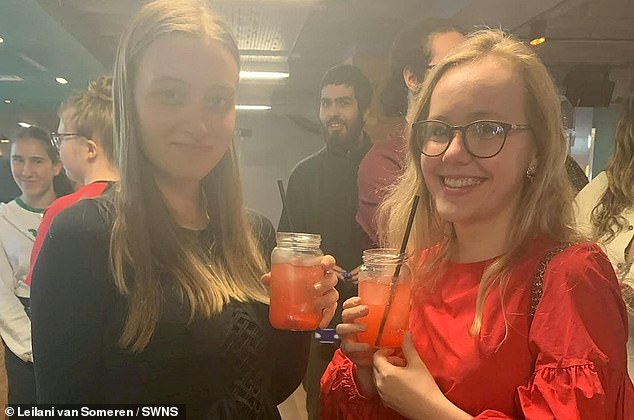 Leilani, from London, had a ‘two drink’ limit and would avoid drinking at parties because she didn’t trust inebriated people her own

Although Leilani no longer drinks alcohol at all, she would sometimes drink a couple of glasses of wine in her final years of secondary school.

She found she was drinking less and less frequently at university, so decided to get involved with the sober social society, which had just launched in 2020 when she joined.

She explained that they are not an AA group or a sober support group, and do have members that drink, but enjoy spending time with members of the society.

The sober society is a 50-50 gender split of men and women.

Leilani speculated: ‘People don’t drink for all kinds of reasons – from religion to just not finding it fun, or because it saves a lot of money.’

Her society gets involved with a huge amount of sober activities from board games and laser tag to karaoke and London bus tours.

Last year the society visited Stepney Green farm and has hosted ‘mub quiz’, which is a pub quiz with mocktails.

Leilani said: ‘Students say they are grateful that we have opened up these social networks, to bring them all together, because it’s still the case that otherwise most university socialising does take place around drinking.’

Being teetotal has been a very positive experience for Leilani but says she sometimes feels like she is ‘missing out.’

She said: ‘I have never been pressured to drink alcohol, as I pick my friends really well.

‘However, I do sometimes feel like I’m missing out. If there are a lot of people getting drunk then I feel uncomfortable and I will leave, which has limited my choice of friends.

‘Moving to university was a scary thing to do, because drinking culture is a big stereotype about Freshers’.

‘And to be honest it was difficult at first with freshers’ socials – because there was rarely anything for me to drink.

‘But it was OK because I thought there would always someone in the same boat as me, who wasn’t drinking.

‘It’s really important that everyone is supported in all their needs whether you drink alcohol or not, for people who drink alcohol as well as those who do, in the same way that we should provide access to wheelchair users.’