Kentucky police shot non-lethal pepper balls at a local TV news reporter and her film crew while they were covering a protest in downtown Louisville on Friday amid nationwide outrage over the police-involved deaths of George Floyd.

The incident was captured live on the air by WAVE-TV reporter Kaitlin Rust.

Rust is heard on the air letting out a scream indicating that she had been shot.

The news anchor from inside the studio asks Rust if she’s ok, to which she replies: ‘Rubber bullets, rubber bullets.’ 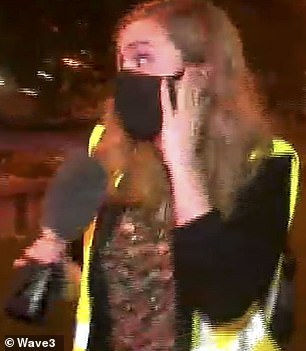 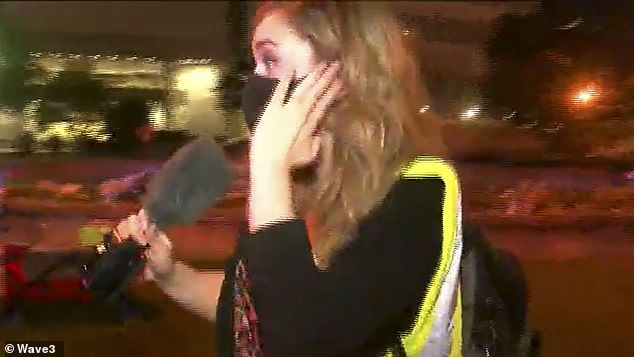 ‘I’m getting shot!’ she said. The news anchor from inside the studio asks Rust if she’s ok, to which she replies: ‘Rubber bullets, rubber bullets.’ 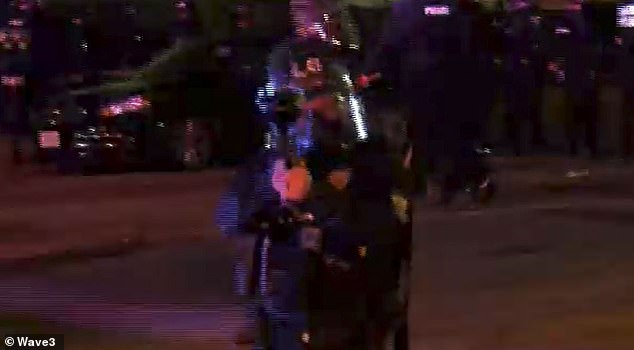 When one of the news anchors asks Rust who the officers were aiming at, she replies: ‘At us! Directly at us!’

The video camera then focuses on an officer armed with what appears to be an FTC semi-automatic pepper ball launcher.

The news anchors were startled at the fact that the officer was firing the pepper balls in the direction of the reporter and her crew.

‘Obviously they see the camera!’ one of the news anchors says on the air.

Rust and her crew are then seen walking away from the area.

‘They’re telling us to move now, I guess, farther away,’ Rust says.

The in-studio anchor replies: ‘Well, I’m sure if they would have said to move you would have done so.’

Rust later explained that she and her crew ‘were behind [the police] line, a little too close for comfort.’ 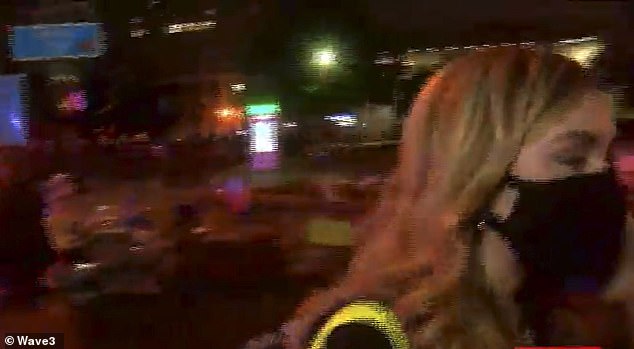 Rust and her camera crew then move to another area. She said she and her crew were ‘too close for comfort’

DailyMail.com has reached out to the Louisville Metro Police Department for comment.

The officer was using a specialized air rifle that fires pepper balls, or non-lethal rounds that contain PAVA and CS irritant powder.

Pepper balls are used by law enforcement and military for crowd dispersal and riot control.

Friday was the second straight night of massive protests in Louisville, where demonstrators took to the streets.

Scores of police officers in riot gear were deployed and some fired tear gas and pepper balls to try and control the crowds.

Demonstrators gathered near City Hall and chanted ‘no justice, no peace’ as well as ‘I can’t breathe.’

Moments before his death, Floyd pleaded with Minneapolis officers, telling them ‘I can’t breathe’ as one of the cops pressed his knee into the 46-year-old’s neck while he was handcuffed on the ground on Monday evening. 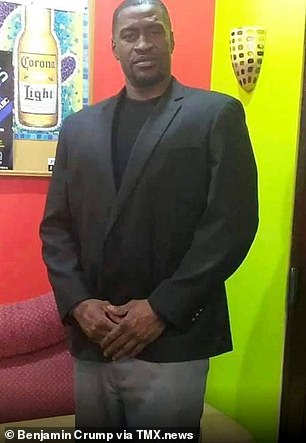 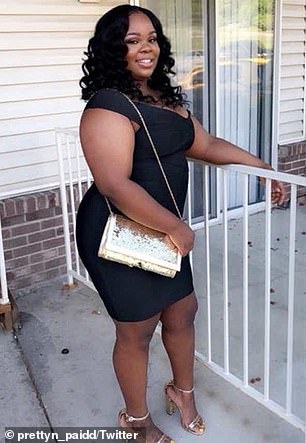 Protests in Louisville were triggered this week by the officer-involved death of George Floyd (left) in Minneapolis. In March, Louisville police fatally shot Breonna Taylor (right), a 26-year-old EMT, in a botched drug raid on her home 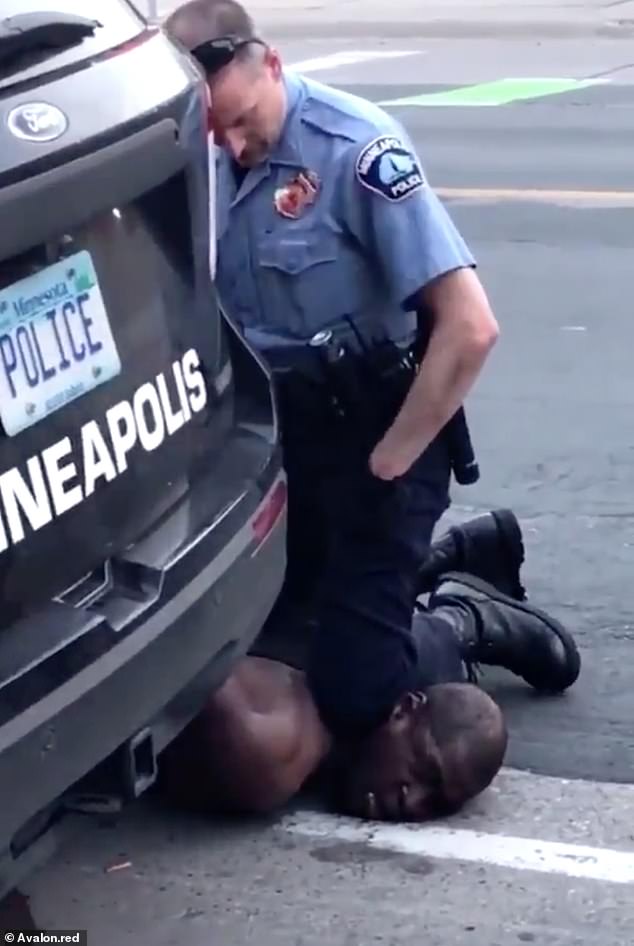 Floyd died in police custody on Monday in Minneapolis after a police officer, Derek Chauvin, 44, was seen pressing his knee against Floyd’s neck for several minutes, cutting off his breathing

In recent weeks, anger at Louisville police has been building over the fatal March shooting of Breonna Taylor.

The 26-year-old black EMT was in her bed with her boyfriend when police executed a no-knock search warrant on her home in what turned out to be a botched drug raid.

Taylor was shot and killed by officers who were responding to gunfire from Taylor’s boyfriend, Kenneth Walker, who was legally licensed to carry a firearm.

Walker shot at the police thinking that they were burglarizing his home. Taylor’s family says police never identified themselves.

Walker was initially charged with attempted murder of a police officer, but those charges were later dropped.

Taylor’s family is suing the city for wrongful death.

During Thursday’s protest, seven people were shot in the city. 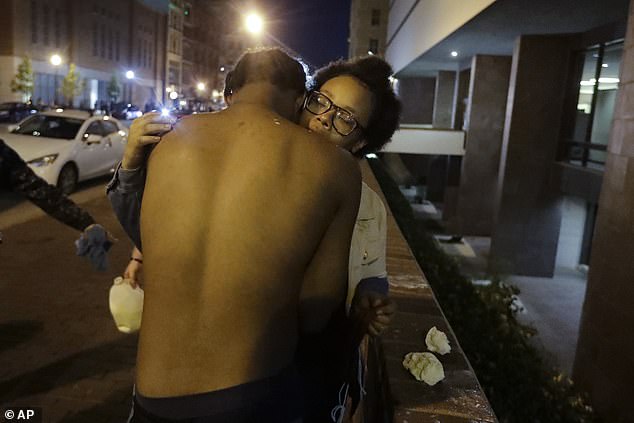 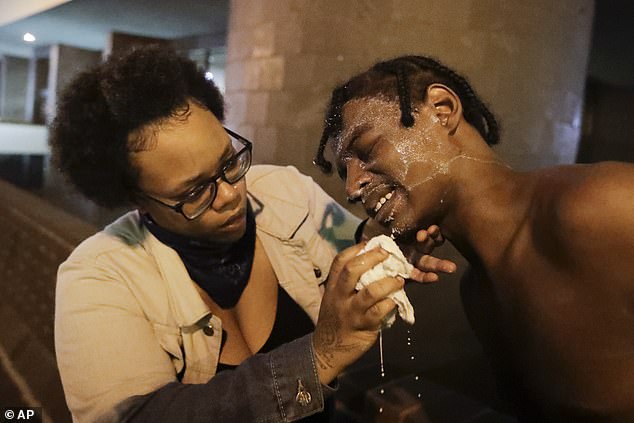 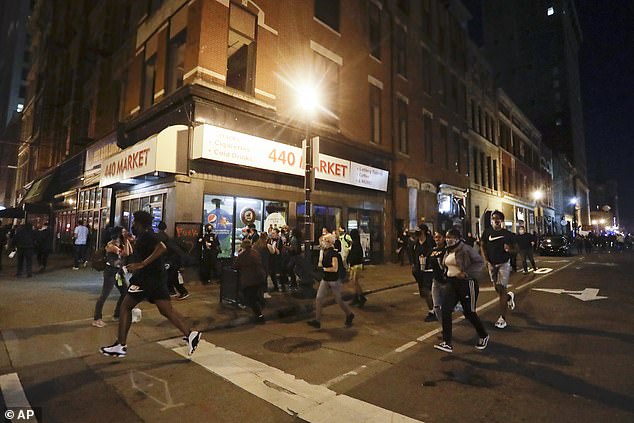 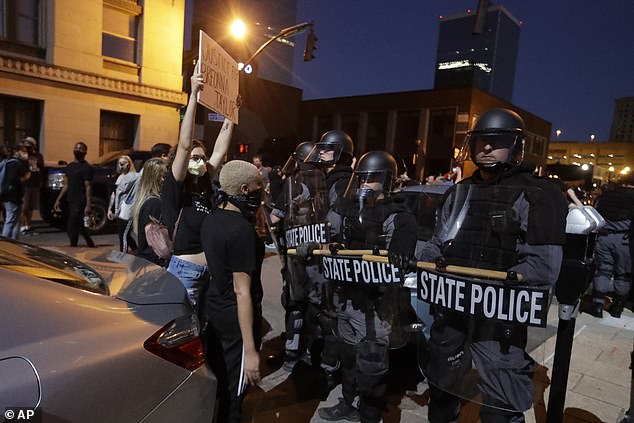 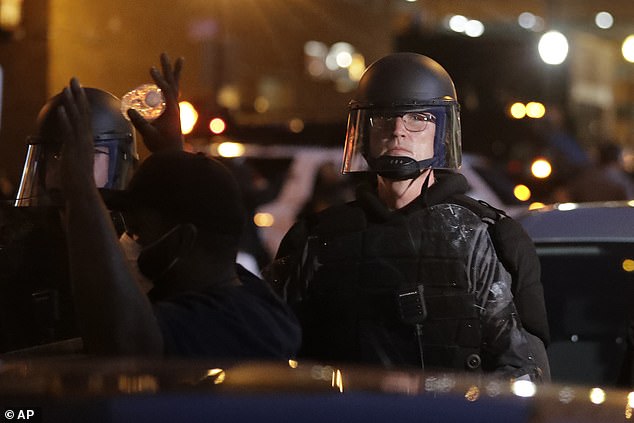 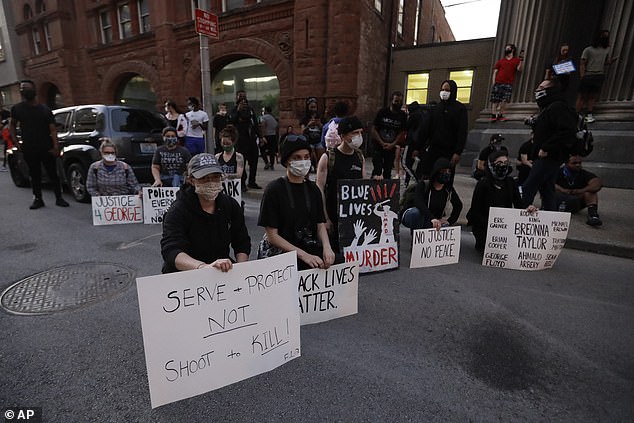 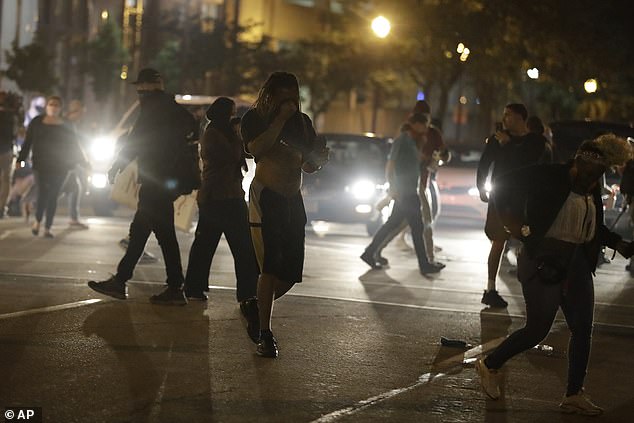 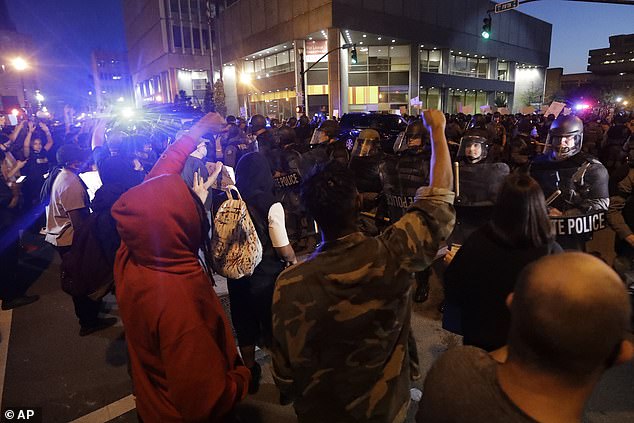 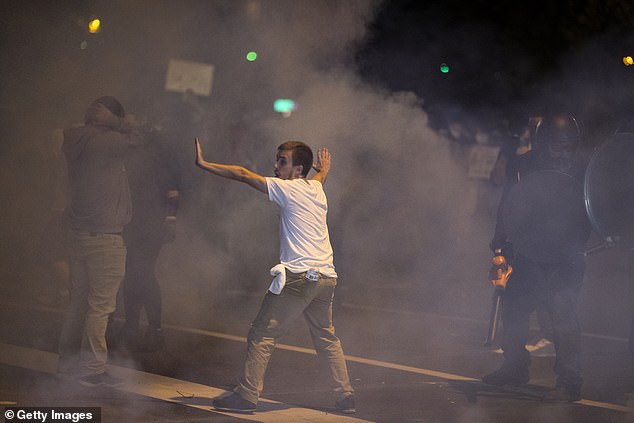 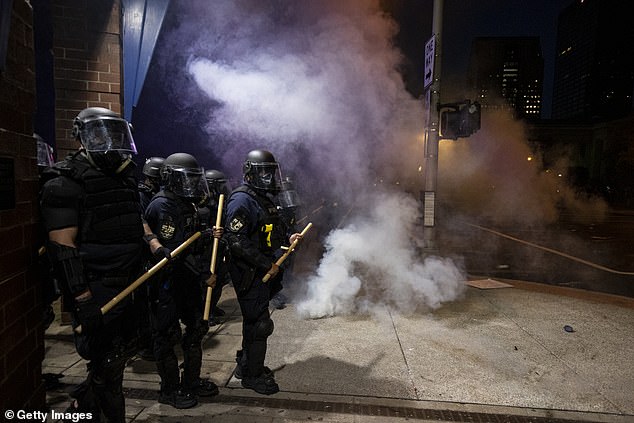 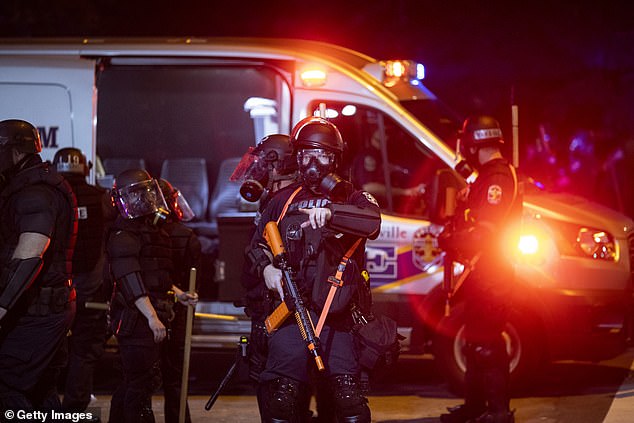 Police are seen above in riot gear in Louisville on Friday, where protesters took to the streets for the second consecutive night 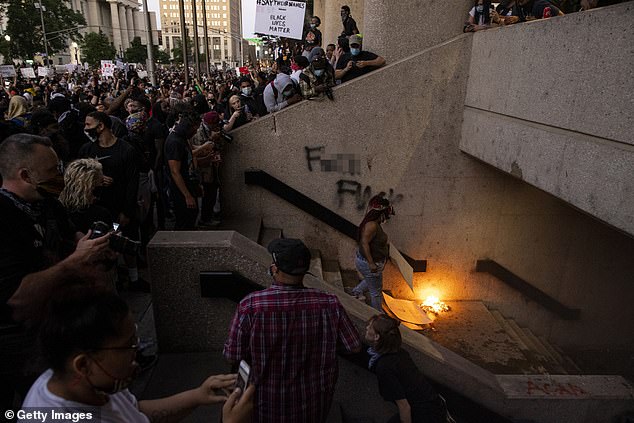 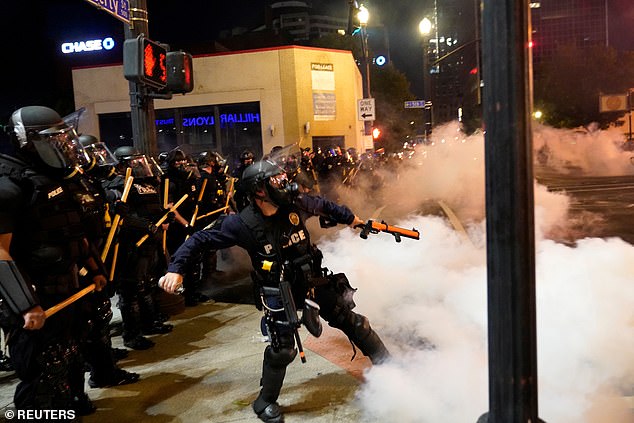 Looking to defuse anger, Taylor’s mother urged protesters on Friday to continue demanding justice but do so ‘without hurting each other.’

Instead, they provided aid to the wounded, he said. TV video showed terrified protesters fleeing as gunfire erupted.

With more rallies planned, Taylor’s mother joined the chorus of calls for protests to remain peaceful.

In her statement, Tamika Palmer said her daughter – an emergency medical technician – devoted her life to others and the ‘last thing she’d want right now is any more violence.’

‘Please keep demanding justice and accountability, but let’s do it the right way without hurting each other.

‘We can and we will make some real change here. Now is the time. Let’s make it happen, but safely.’