A woman has sparked a debate online after admitting her partner gives her the ‘ick’ because he lets her pay for everything due to her higher salary.

Taking to British parenting platform Mumsnet, the anonymous woman explained that her current partner earns £25,000 a year – however she earns four times that amount.

After admitting she previously came back from financial ruin, she said she wants things to be split in half between the pair ‘or at least on track to be’, however that hasn’t been the case so far.

Many rushed to the comments with some claiming she should ‘end the relationship’ as he is ‘using her’, while others said she shouldn’t ‘look down on him’ for earning less money.

The woman explained: ‘DP (darling partner) and I have been together around 8 months – were friends for around a year prior to being in a relationship.

‘We met through work and clicked immediately. I had left ExH (ex-husband) six months prior to meeting him. I have a DD (darling daughter) who is 3.5. ExH was financially abusive and contributes a minimal amount to her life.

‘I didn’t initially fancy DP – not my type on paper at all and genuinely saw us as friends but the more I got to know him, the more I found attractive.

‘My main concern before getting together, which we discussed at length before anything happened, was money and finances. 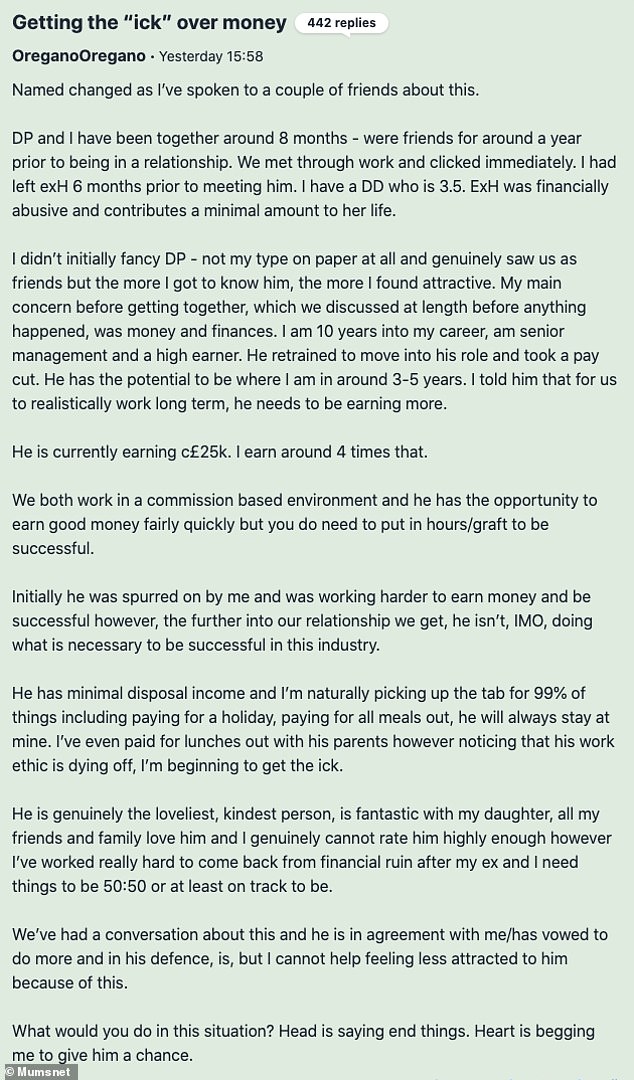 Taking to British parenting platform the anonymous woman explained that her partner earns £25,000 a year – while she earns four times that amount

‘I am 10 years into my career, am senior management and a high earner. He retrained to move into his role and took a pay cut.

‘He has the potential to be where I am in around 3-5 years. I told him that for us to realistically work long term, he needs to be earning more.

‘He is currently earning £25k. I earn around 4 times that. We both work in a commission based environment and he has the opportunity to earn good money fairly quickly but you do need to put in hours/graft to be successful.

‘Initially he was spurred on by me and was working harder to earn money and be successful however, the further into our relationship we get, he isn’t, IMO, [In My Opinion] doing what is necessary to be successful in this industry.

‘He has minimal disposal income and I’m naturally picking up the tab for 99 per cent of things including paying for a holiday, paying for all meals out, he will always stay at mine. 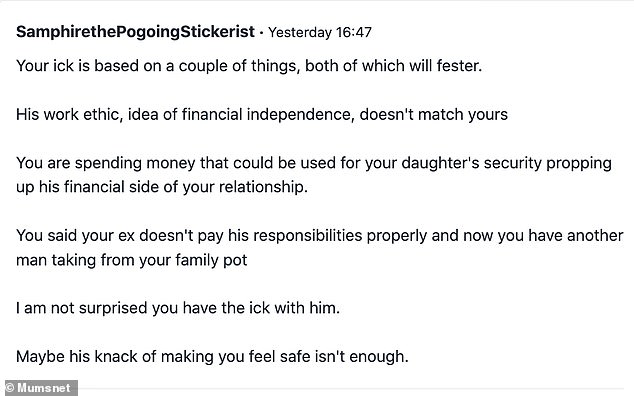 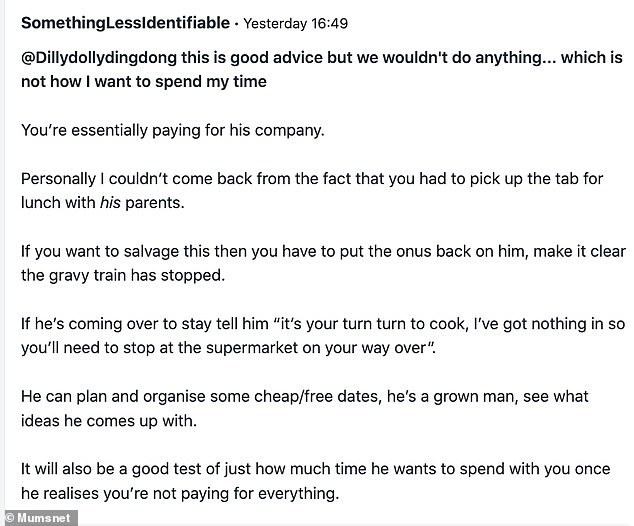 ‘I’ve even paid for lunches out with his parents however noticing that his work ethic is dying off, I’m beginning to get the ick.

‘He is genuinely the loveliest, kindest person, is fantastic with my daughter, all my friends and family love him and I genuinely cannot rate him highly enough however I’ve worked really hard to come back from financial ruin after my ex and I need things to be 50:50 or at least on track to be.

‘We’ve had a conversation about this and he is in agreement with me/has vowed to do more and in his defence, is, but I cannot help feeling less attracted to him because of this.

‘What would you do in this situation? Head is saying end things. Heart is begging me to give him a chance.’

Many rushed to the comments to say she should end the relationship because he is probably using her.

One person wrote: ‘Unfortunately you’ll have to end this. I would be completely put off. Like you, I work incredibly hard and I expect people to have self motivation. Just be kind but say this is not working. 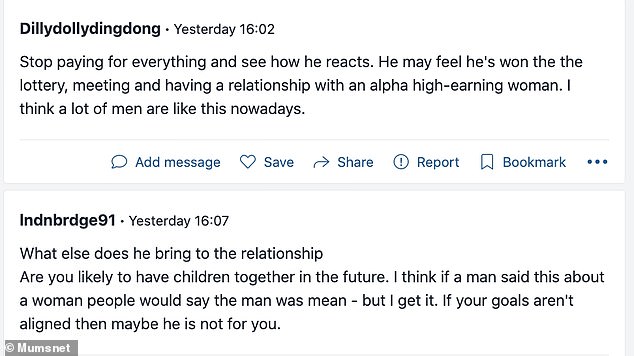 He might beg you to reconsider (yuck) but please hold firm. You know those successful youngsters at work? You can clearly see they are hungry for money and business and the hunger comes from inside them.’

Another said: ‘I think it’s more than just ‘the ick’. He sounds like a bit of a user. Just because he’s ‘nice’ doesn’t mean he’s good enough for you.’

Meanwhile others said she shouldn’t ‘look down’ on the guy for earning less money than her.

One person wrote: ‘If I was him I would leave you. Go find someone who earns more money if that’s all you care about.

‘Couldn’t bare to be in a relationship where the other person looks down on me… he’s even made the effort with your child as well.’

Another wrote: ‘I don’t get why you started a relationship with someone on a low wage if money is so important to you.

‘Let him go work at his own pace, and you go find yourself a man on 100k instead. You’re not being fair.’

Someone else commented: ‘I think you should end it personally. You don’t respect him and it will only get worse.

‘Let him go and he can find someone nice and less ambitious before this becomes an acrimonious separation which will negatively impact both of you finding a more suitable match.’