Donald Trump dialed up Vladimir Putin on Tuesday to offer congratulations on his suspicious but official landslide victory in a re-election bid for a fourth term.

‘I had a call with President Putin and congratulated him on the victory, his electoral victory,’ Trump told reporters at the White House, referring to a race that the Russian strongman won with 77 per cent of the vote.

‘We will probably get together in the not too distant future,’ Trump said in the Oval Office during a meeting with Saudi Crown Prince Mohammad bin Salman.

‘By doing so with Vladimir Putin,’ McCain continued, ‘President Trump insulted every Russian citizen who was denied the right to vote in a free and fair election to determine their country’s future, including the countless Russian patriots who have risked so much to protest and resist Putin’s regime.’

The president and the White House Press office both provided official confirmation that the call took place, a day after the White House declined to describe the election as ‘free and fair.’ 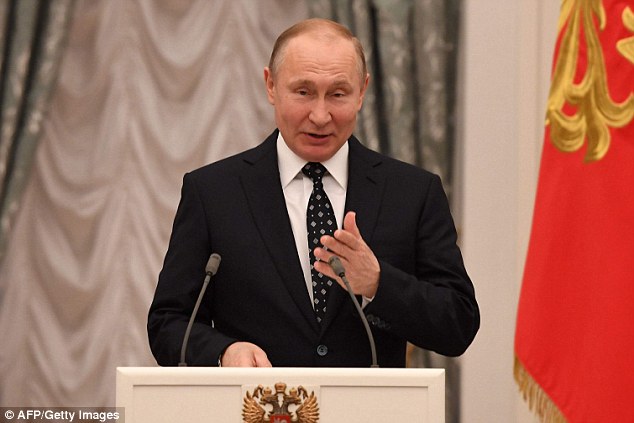 Putin captured about 77 per cent of the vote on March 18, an unlikely total in a democracy

Trump described the conversation as ‘a very good call.’ He said the two leaders would most likely discuss the ‘arms race’ which he described as ‘out of control.’

‘We will never allow anybody to have anything close to what we have,’ Trump said. Earlier this month, Putin revealed Russia has a new missile that ‘can reach any point in the world.’

Putin boasted about the missile during his State of the Union address.

‘It can attack any target, through the North or South Pole, it is a powerful weapon and no missile defense system will be able to withstand,’ Putin said, CNBC reported March 1.

He said the missile ‘can reach any point in the world.’

Trump said he and Putin would also ‘discuss Ukraine, Syria and North Korea.’ 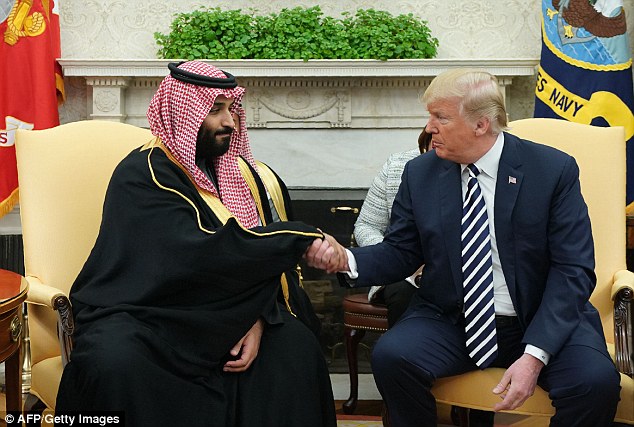 Putin won the contest with about 77 per cent of the vote, drawing eye-rolls – and few immediate congratulation calls – from the West.

White House Deputy Press Secretary Hogan Gidley told reporters aboard Air Force One on Monday that there was ‘no scheduled phone call’ between the two leaders.

Dictatorships and other authoritarian governments lined up to boost Putin’s ego following his win, including the leaders of China, Venezuela, Belarus, Kazakhstan and Iran – all Russian allies.

The silence from the rest of the civilized world is partly because of tensions related to the poisoning of former Russian spy Sergei Skripal and his daughter in Sailsbury, England.

The United Kingdom has blamed the assassination attempt on Russia, and the Trump administration has said it shares that assessment.

Kremlin spokesman Dmitry Peskov told reporters that the lack of a call from Trump was not seen as ‘an unfriendly step.’

‘Some cannot call him due to their schedule. There is no need to dramatize,’ he said.

Asked Monday whether Trump believes the Russian election was ‘free and fair,’ Gidley shot back that ‘we’re not surprised by the outcome.’

Pressed on what that means, he repeated the same words a second time.

Gidley also took pains to insist that the administration would ‘work to cultivate the relationship we have with Russia, and obviously we will impose costs when Russia threatens our interests.’

Russia’s election was marred by what some international monitors saw as rampant fraud. 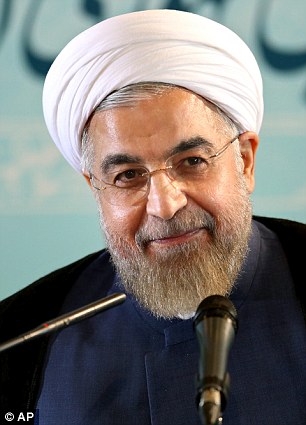 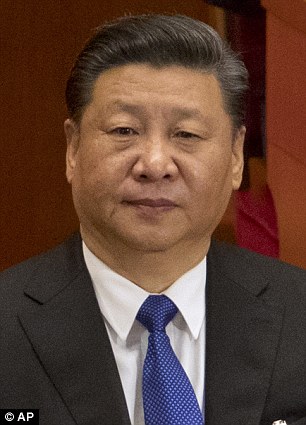 Many observers were reportedly kept out of polling places, and there were reports of tempering with ballots that had already been cast.

Alexei Navalny, a leading opposition leader, was not permitted to run because of a past criminal conviction – something his supporters believe was politically motivated.

It has been customary for U.S. presidents to call Putin after each of his election victories, but Trump may have approached the errand with caution.

He is under investigation by a special counsel and a Senate committee over unproven allegations that his presidential campaign colluded with Russians to meddle with the outcome of the 2016 U.S. election.

Trump and his spokespersons have dismissed the probe’s mission over and over, and the president has sent signals that a closer relationship with Moscow would be in America’s interest generally.