These are some of the stunning images submitted to the Sony World Photography Awards 2018 as the deadline fast approaches for hopeful snappers.

Among the amazing shots already handed over to judges is a spectacular portrait of a Kalahari lion with sunshine illuminating its golden eyes.

Another picture shows a lion-tailed macaque in stark black and white as he keeps an eye other monkeys while they drink water.

One astounding picture shows a light illusion featuring dazzling colours after being taken in a venue named the ‘Crystal Universe’ in Shenzhen, China.

The deadline for the Open competition is January 4 next year and January 11 for the Professional. 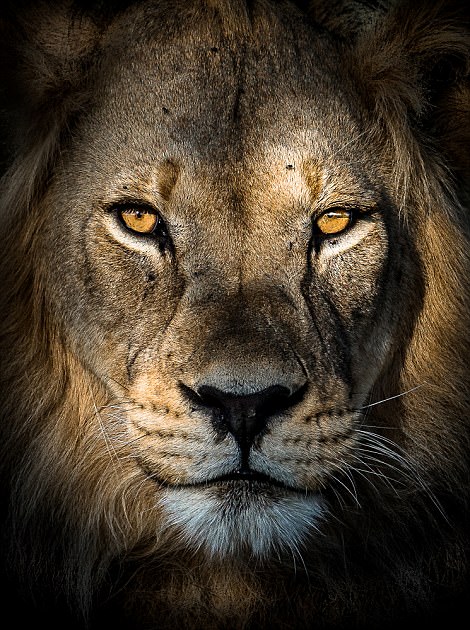 Among the amazing shots already handed over to judges is a spectacular portrait of a Kalahari lion (right) with sunshine illuminating its golden eyes. Another picture shows a lion-tailed macaque (left) in stark black and white as he keeps an eye other monkeys while they drink water. The stunning images, submitted to the Sony World Photography Awards 2018, have been released as the deadline fast approaches for hopeful snappers 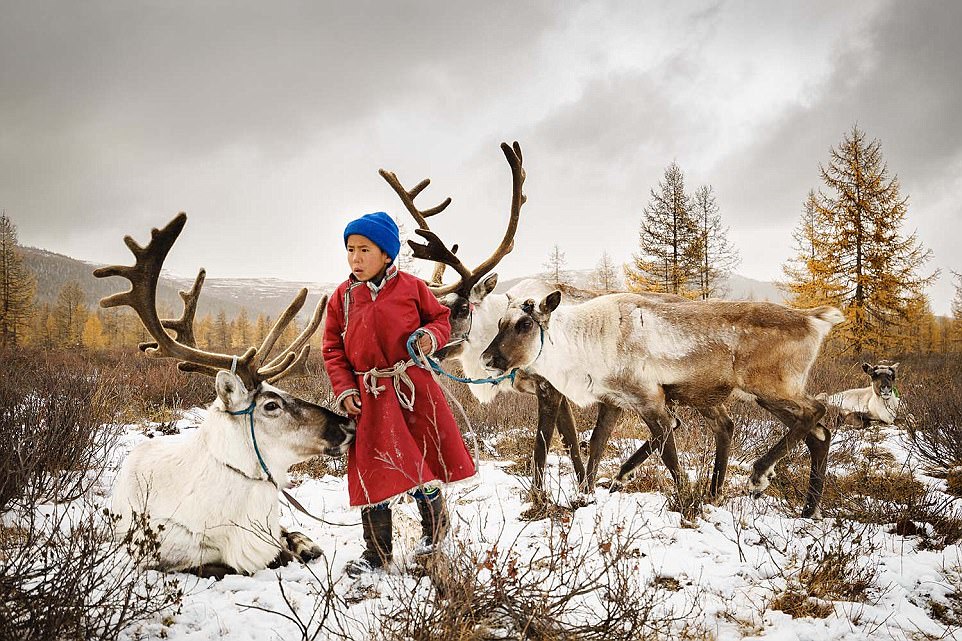 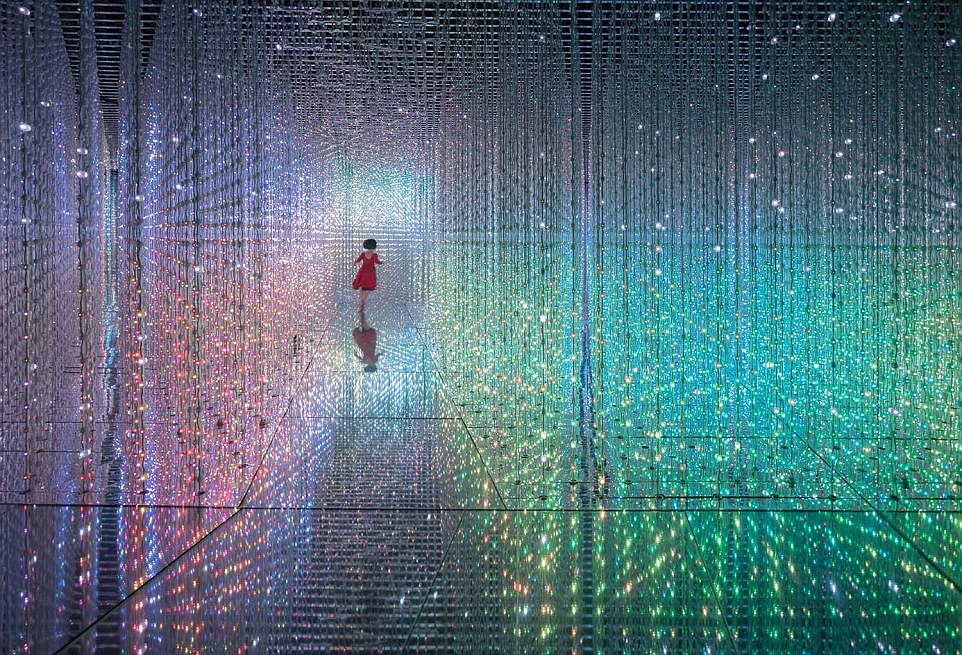 One astounding picture shows a light illusion featuring dazzling colours after being taken in a venue named the ‘Crystal Universe’ in Shenzhen, China. The photographer explained: ‘The light illusion is an artwork that uses an accumulation of light points to create a sculptural body. By this time, I had been waiting with my friend for the right composition to happen. I saw a little girl in a red dress running around. I kept on waiting and waiting expecting that she would come to the perfect spot. Luckily she ran out again by the channel’ 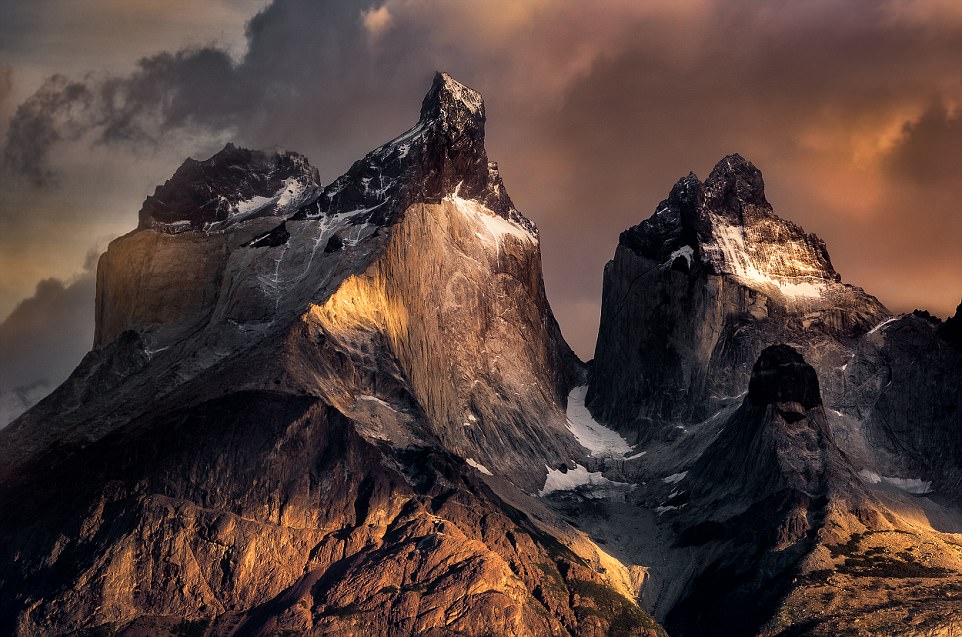 The deadline for the Open competition is January 4 next year and January 11 for the Professional.  The above photograph was taken at the Torres del Paine National Park in Chile’s Patagonia region. The photographer said: ‘I came to this secluded viewpoint in early morning, I was fortunate to get pretty amazing weather. The sunshine shined the famous Cuernos del Paine peaks, they looked magnificent and incredible’ 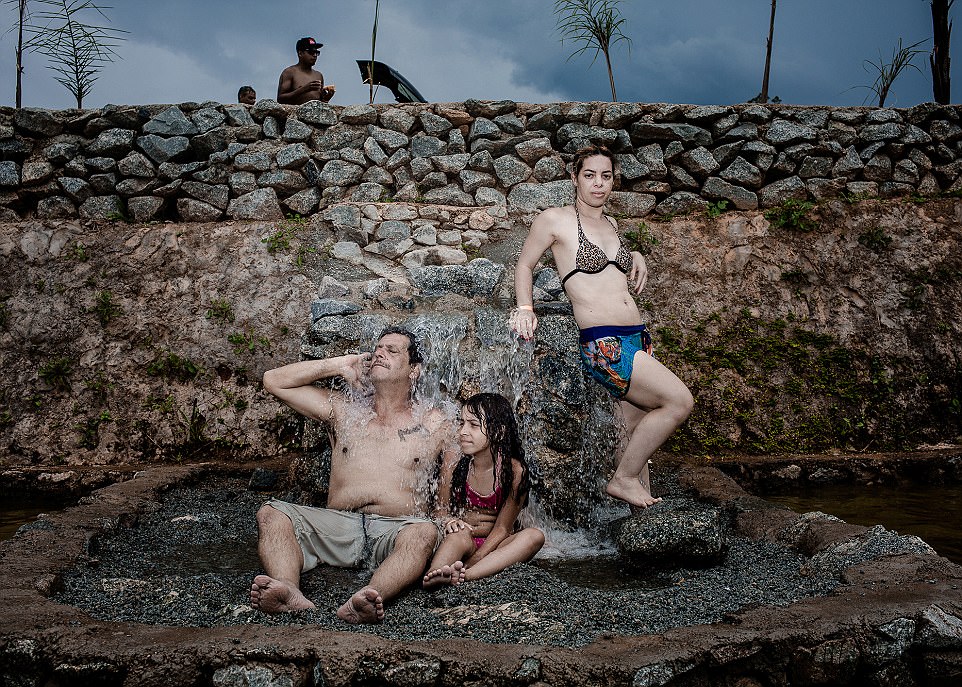 This fascinating image was captured in Sao Paulo, Brazil’s biggest city. The portrait was taken on the artificial beach of Sitio do Borges, in Itapevi, where locals go to enjoy hot days. The nursing technicians Marco Afonso Aires, 53, and Lilian de Matos Batista, 31, are pictured with their daughter Larissa Ayres, 10 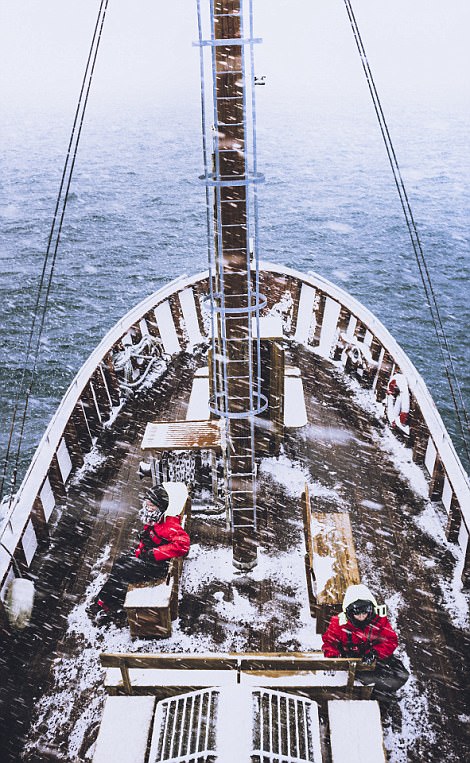 Left: Water running over rocks in Larvik, southern Norway, captured just as the sun was setting. Right: A traditional Icelandic wooden boat, which spends most of the year sailing around Skjalfandi Bay. The photographer explained: ‘I feel joyful when a normal morning suddenly transforms into an unusual afternoon. That was exactly what happened during this day’ 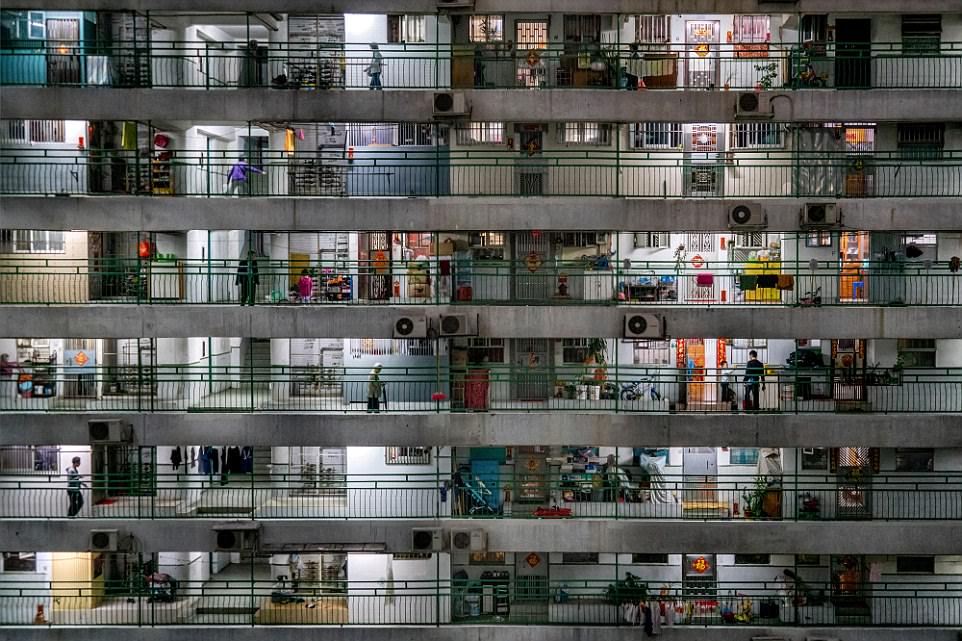 Pictured: Macau, an autonomous territory in China. The city is densely populated, with many residents living in tower blocks of apartments 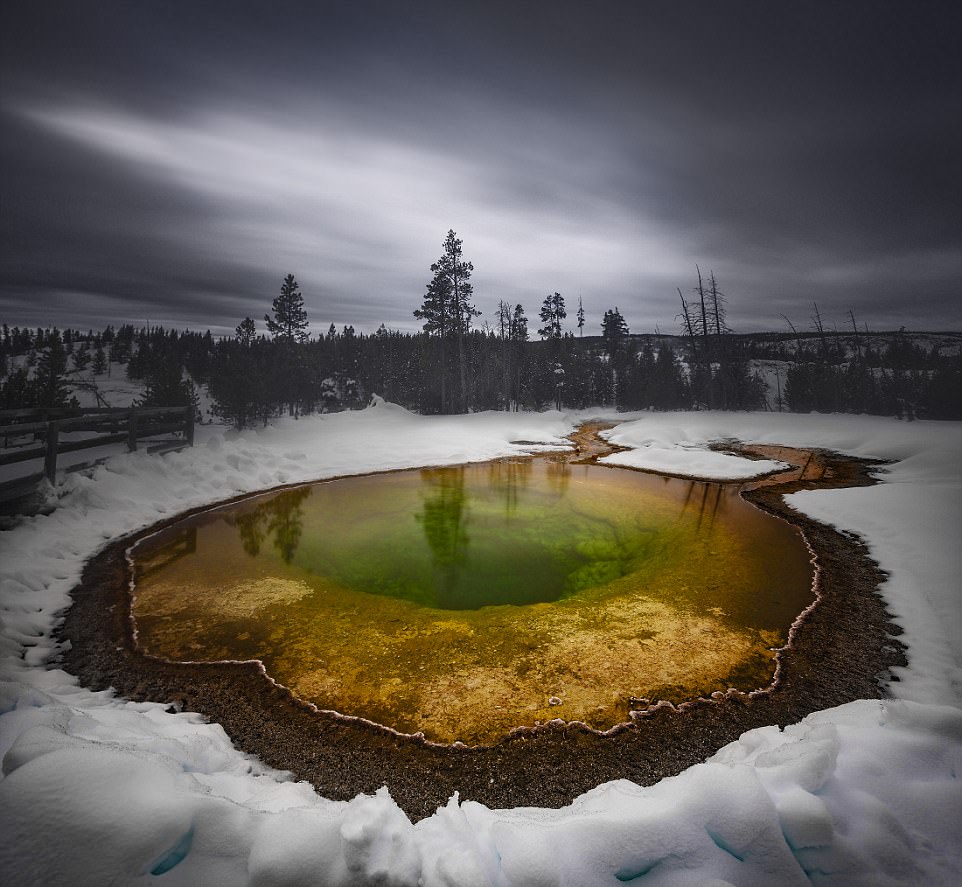 The Morning Glory pool at Yellowstone National Park, USA, in deepest winter. The park, in Wyoming, is based on an ancient super volcano 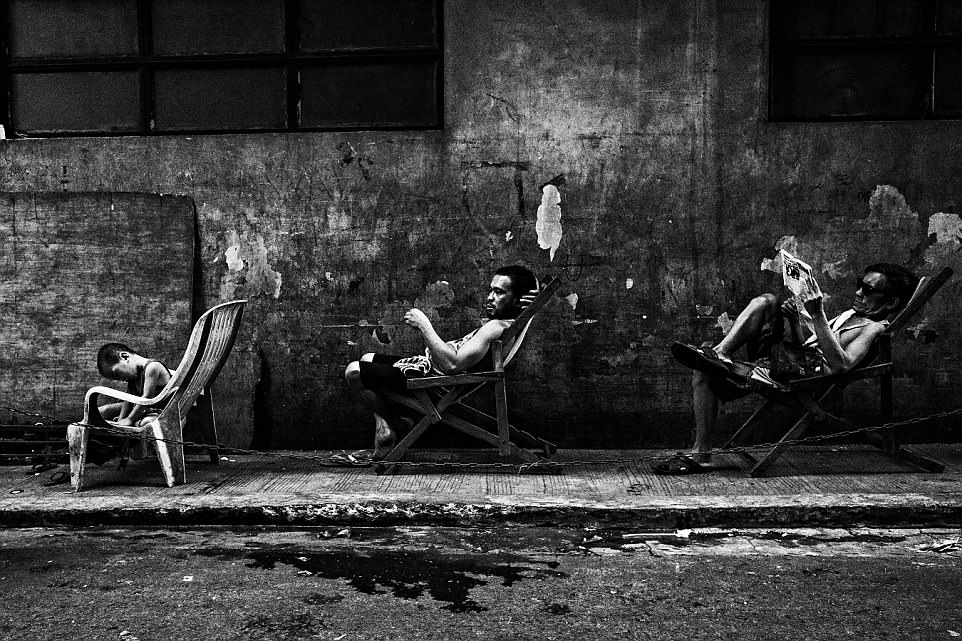 Three generations of men relax in Manila, the capital of the Philippines. The snapper said: ‘It is like an evolution from being a playful kid to a relaxed, worry-free old man’ 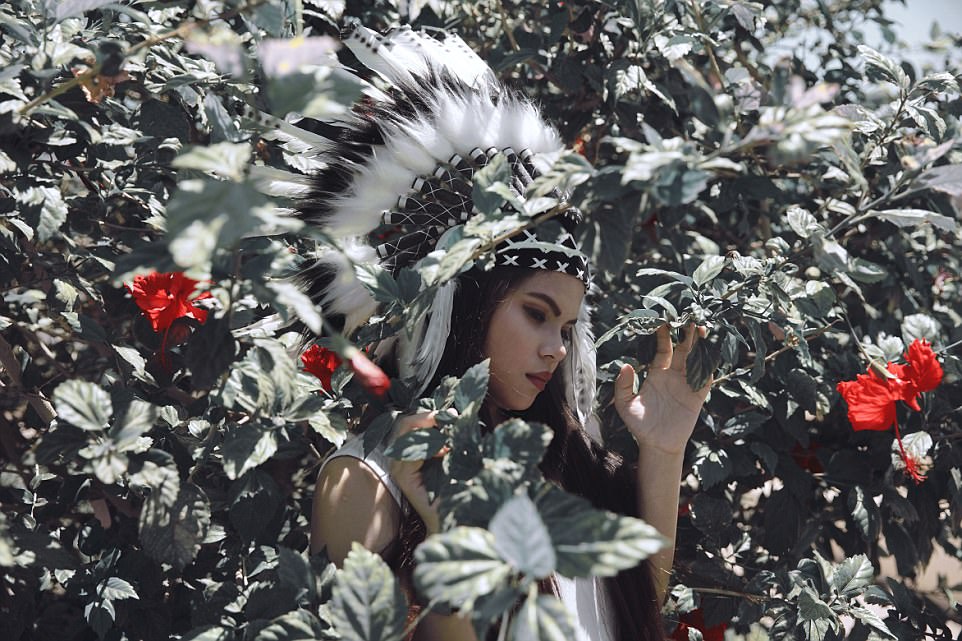 This photograph, showing horses grazing on grassland, was taken in the Wulangbu Dam in Inner Mongolia, which is part of China 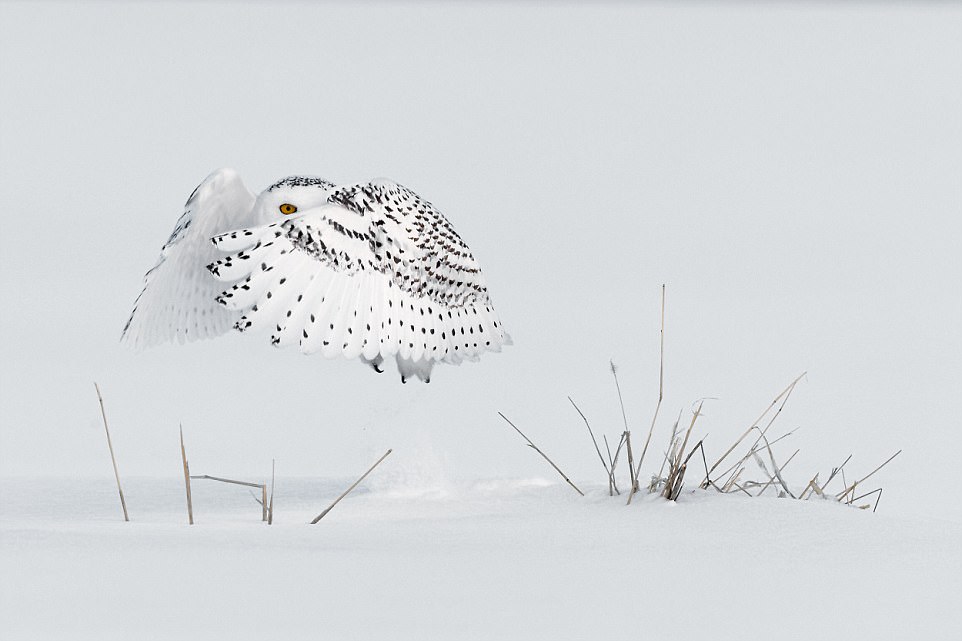 Another entrant is this stunning whiteout showing a snowy owl flying towards another female. It appears to be concealing its left eye with its left wing while peeping with its right eye 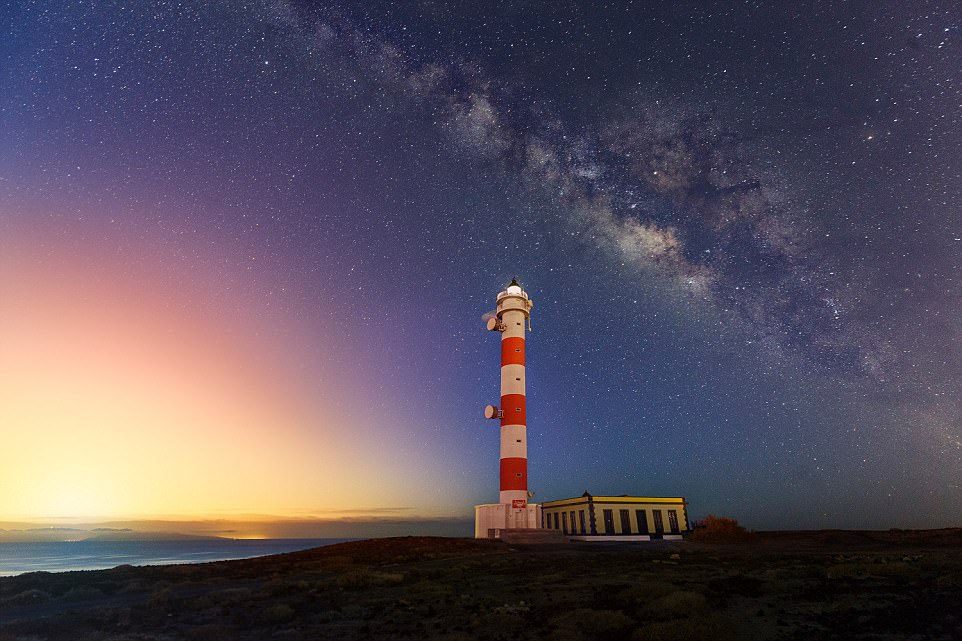 Pictued: Poris lighthouse in the Canary Islands can be seen against the Milky Way and the rising sun. It is actually two images merged – taken 75 minutes apart 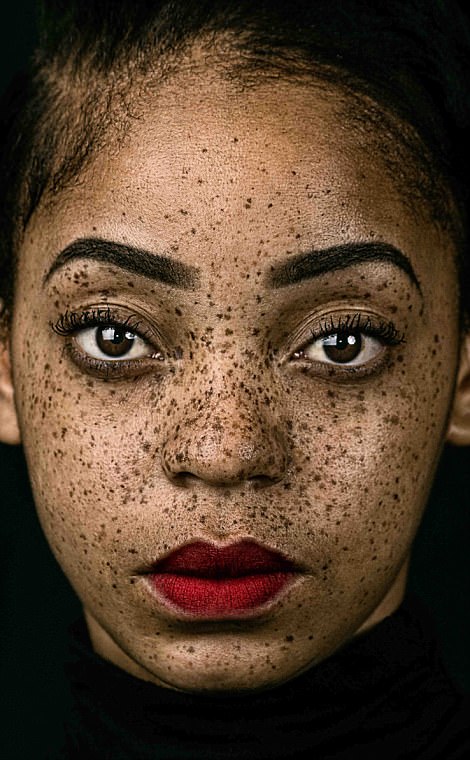 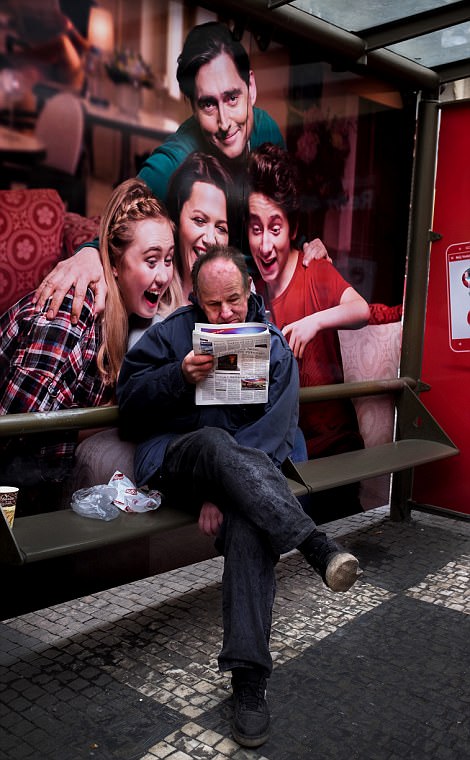 Left: A portrait of a woman with freckles. The photographer said: ‘This image was taken because I simply found the model to be beautiful. She caught my eye at an event and I had to bring her into the studio so I could capture every single freckle on her’. Right: A man waiting for a tram reads a newspaper without realising what is behind him 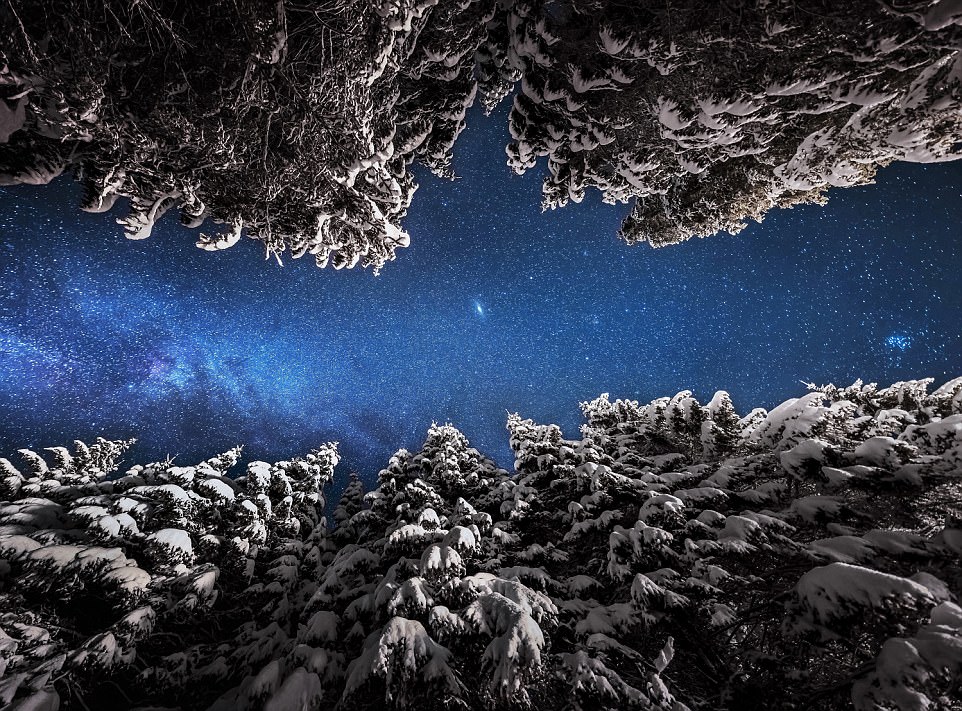 Stars and galaxies can be seen in this snowy image, taken at the Pokljuka Plateau in Slovenia. The photographer put the camera in the middle of a road in the area and pointed it upwards 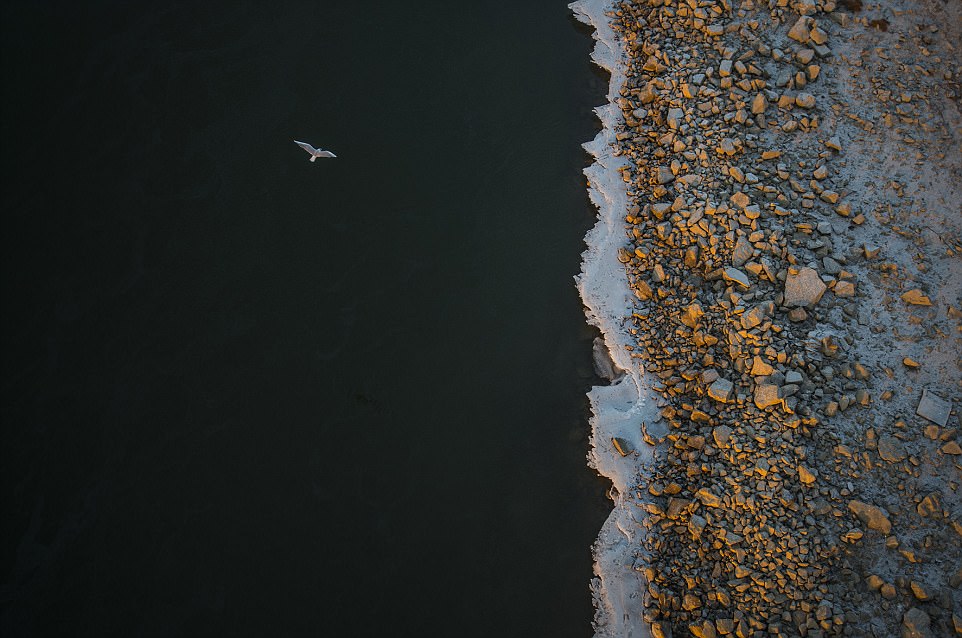 This image was taken from the Margit Bridge over the Danube in Budapest. The photographer reports it was a ‘very very cold day’, hence the ice 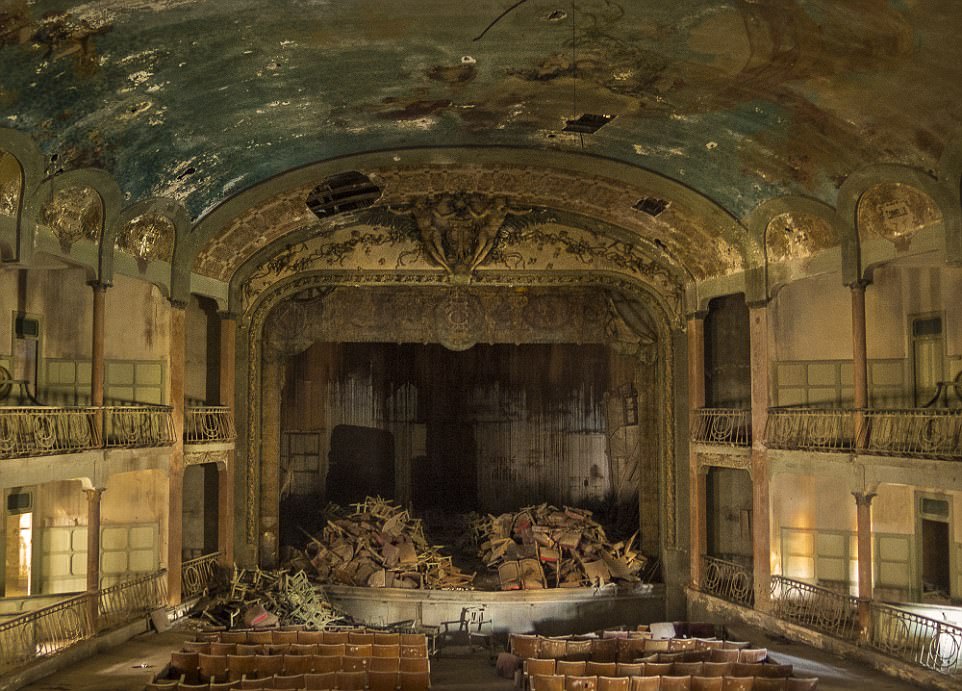 This theatre, in Tangier, was built by a wealthy family from Seville in Spain. It was closed in the mid-1980s and has been unused ever since 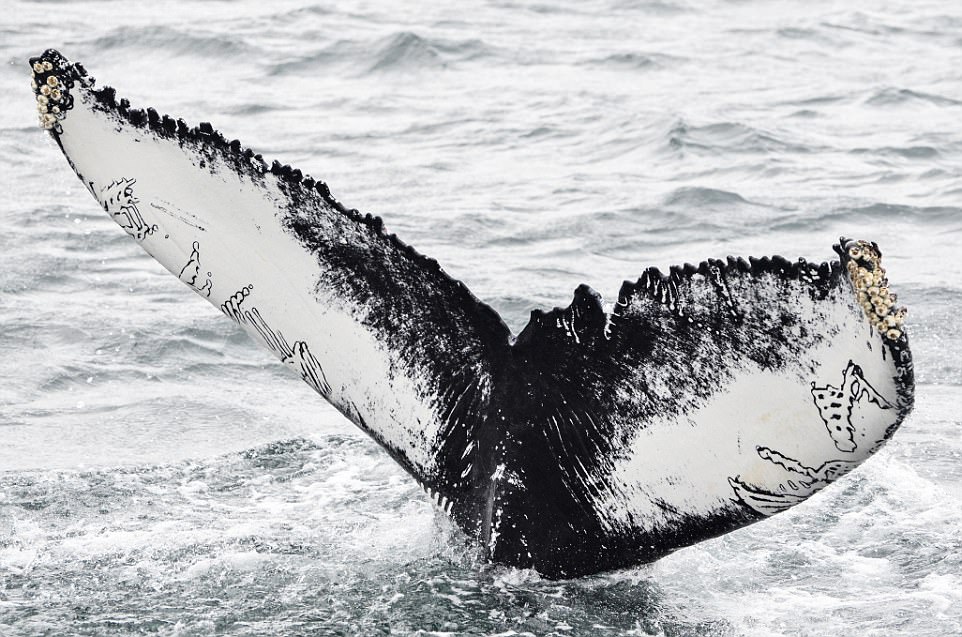 A beautiful whale – with barnacles on its tail – can be seen swimming north of Iceland. The photographer described its tail as featuring ‘natural tattoo-like symbols’ 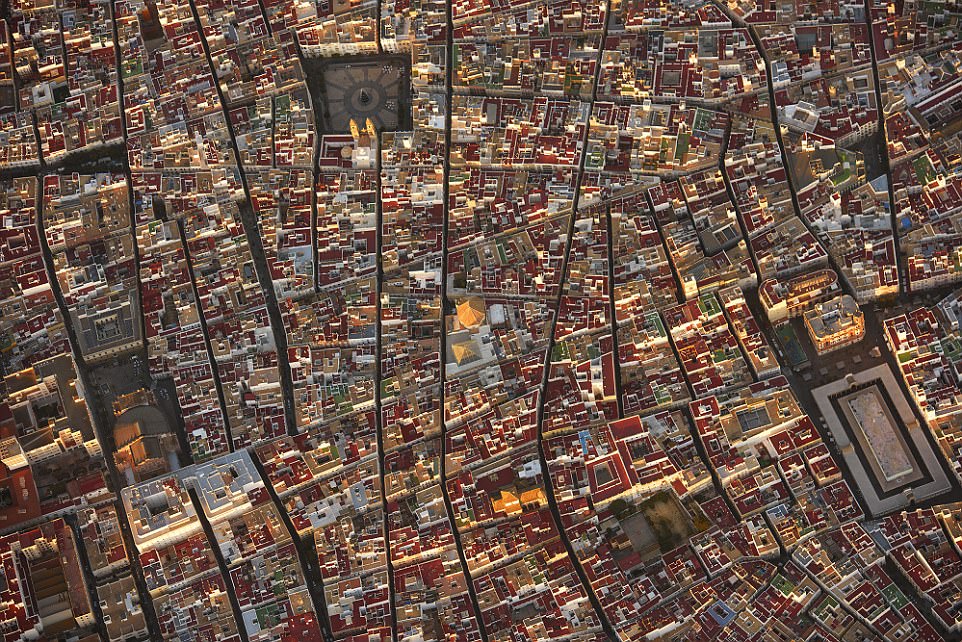 The town of Cadiz, Spain from above is as fascinating as it is from ground level – charming streets, narrow alleys, beautiful architecture, markets and churches 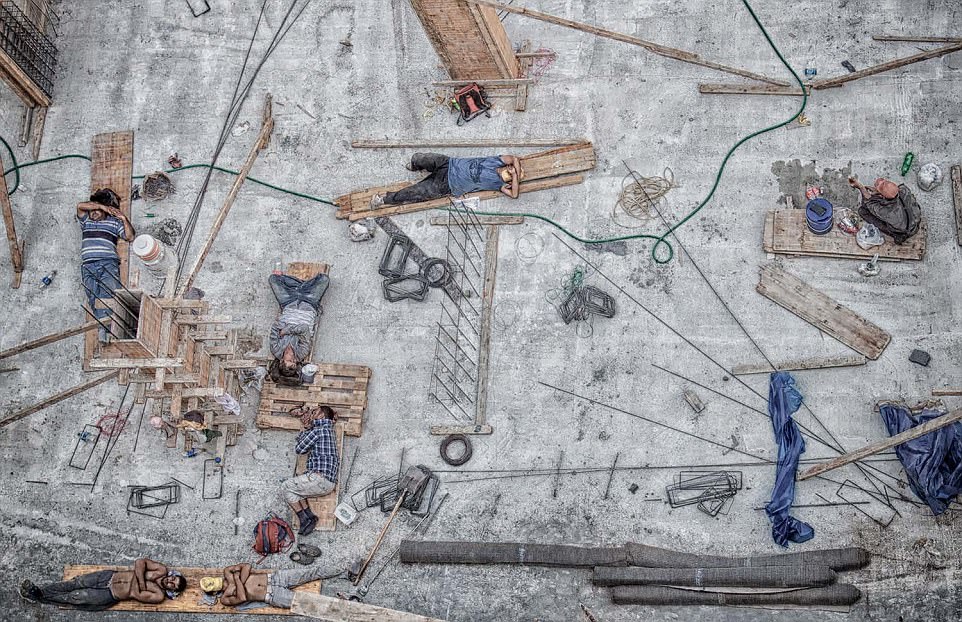 One photographer snapped a photo of construction workers on their lunch break. Many took naps on slats of wood on the work site. The photographer said they took the photo from the sixth floor of the building, though it’s unclear where the photo was snapped 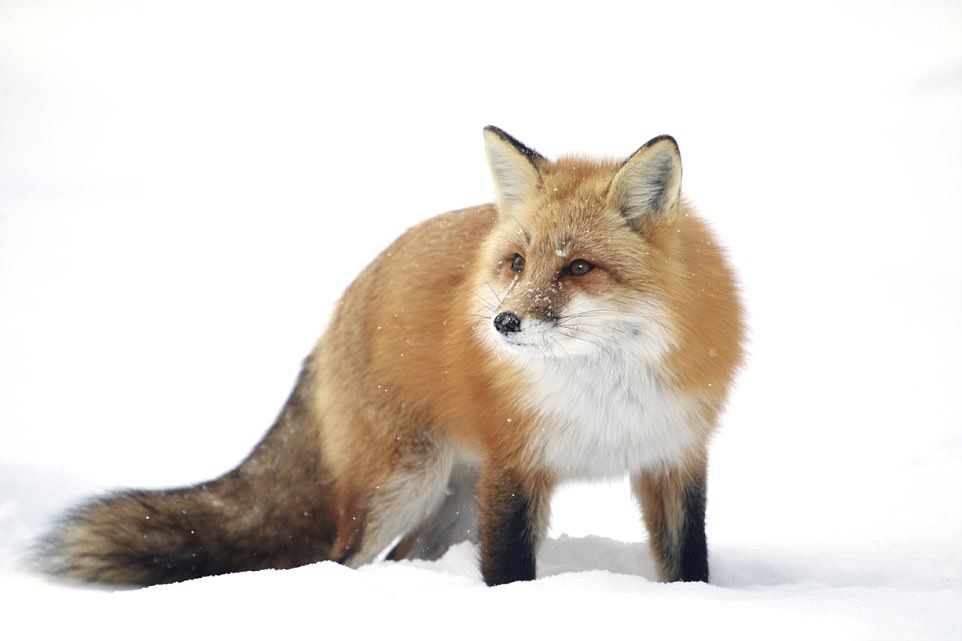 One photographer snapped a photo of a red fox standing in the snow. The photographer said the picture was snapped last January after they followed a trail of fox tracks through the woods. They said that ‘getting low’ allowed for the photo to give off an ‘isolated effect’ of white with the snow 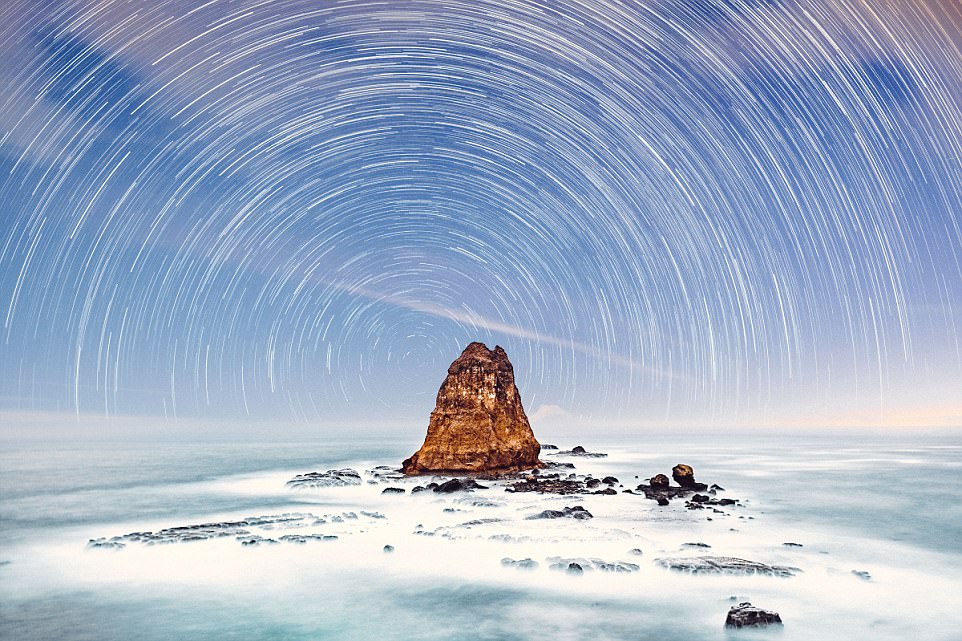 This picture of Papuma in East Java, Indonesia, was taken in October. The photographer said it was his or her first time visiting the region, and they returned three times to capture the mountain in different lighting. 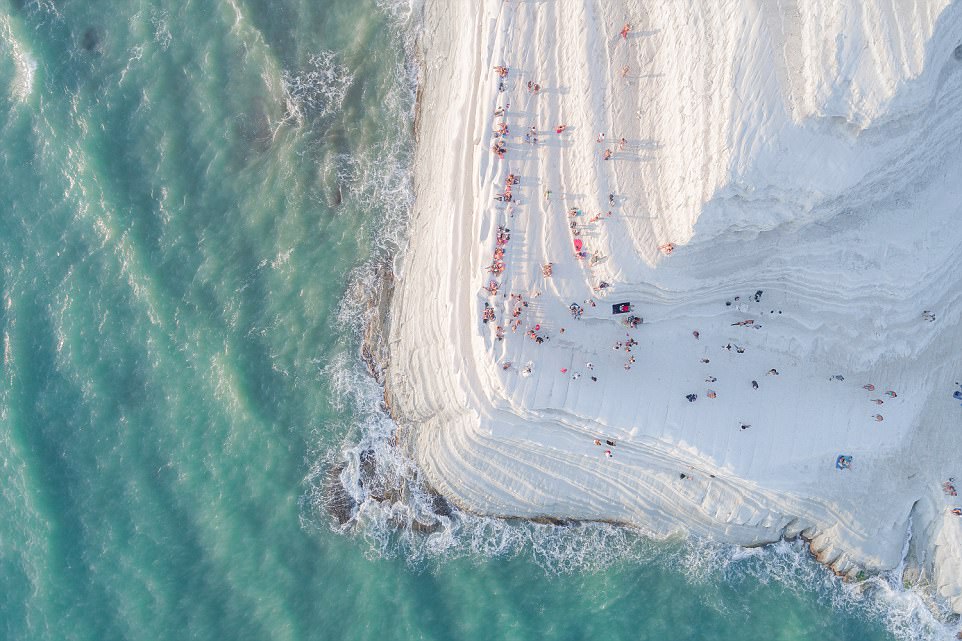 Scala dei Turchi (The Turkish Steps) is a white cliff in Realmonte (Sicily), made of a soft limestone and a blinding white marl. Natural erosion has created steps on the cliff face, making it look soft and sinuous, ‘like a Big Meringue covered with sprinkles (the people sitting and walking on it),’ the photographer said