Following their heroics at the Normandy Landings, a series of haunting images have captured the fierce resistance the Allied Forces faced as they attempted to push the Nazis out of France.

Harrowing pictures from the latter stages of World War Two depict US soldiers running into battle as a shell bursts beside them, a field of abandoned German helmets after a wholesale surrender, and the stoic expression of a 24-year-old tank operator captured just days before he was killed in action.

Other images reveal the gutted landscape of a Dutch town ravaged by constant air raids.

Historian Brooke S. Blades’ new book The Americans from Normandy to the German Border: Rare Photographs from Wartime Archives offers an insight into what the American soldiers faced following the D-day landings in the summer of 1944.

After Allied soldiers tackled the terrifying prospect of landing on France’s heavily fortified northern shore and managed to break through the Nazi’s defences, they were then tasked with beating the Third Reich troops back to Germany.

The ill-fated Operation Market Garden brought home the reality that the war would continue into 1945 and the stage was set for the costliest battle in American history – The Battle of The Bulge.

Photos also shed light on  other key events in the autumn and winter of 1944, including the liberation of Paris.

This parachutist was pictured landing near a haystack in a Dutch field. The image comes from a book offering an insight into what the American soldiers faced following the D-day landings in 1944 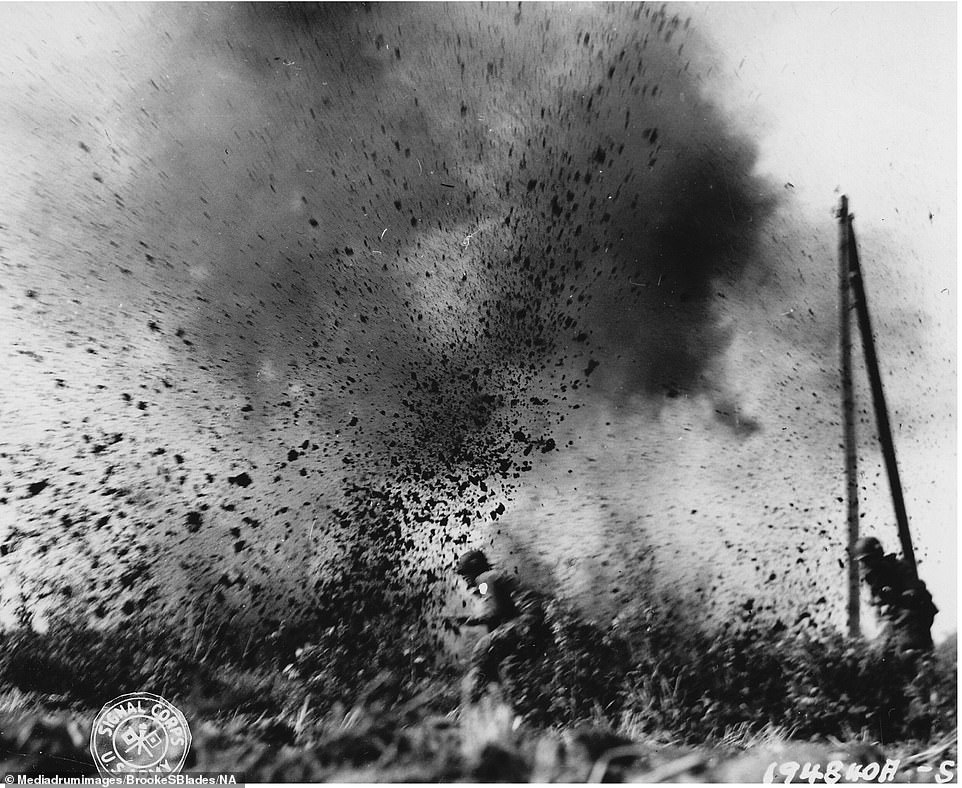 This image shows a bursting artillery or mortar shell among the XIX Corps advancing near Maastricht towards the German border. After D-Day the Siegried Line was penetrated and Aachen fell – but the American First Army suffered heavy casualties in the Hurtgen Forest. As winter set in, the third Army crossed the Moselle River and into the Saar 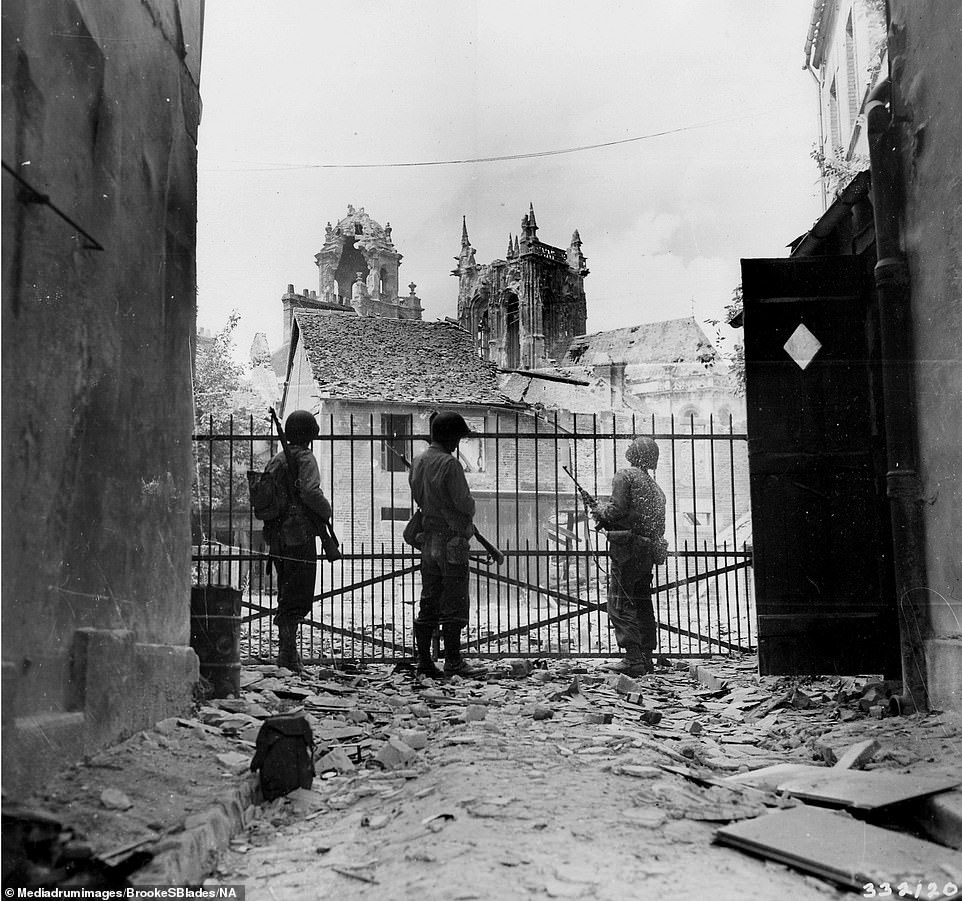 American soldiers examining ruins near the church in Argentan, near Falaise, on 20 August 1944. This is one of a series of haunting images capturing the fierce resistance the Allied Forces faced as they attempted to push the Nazis out of France 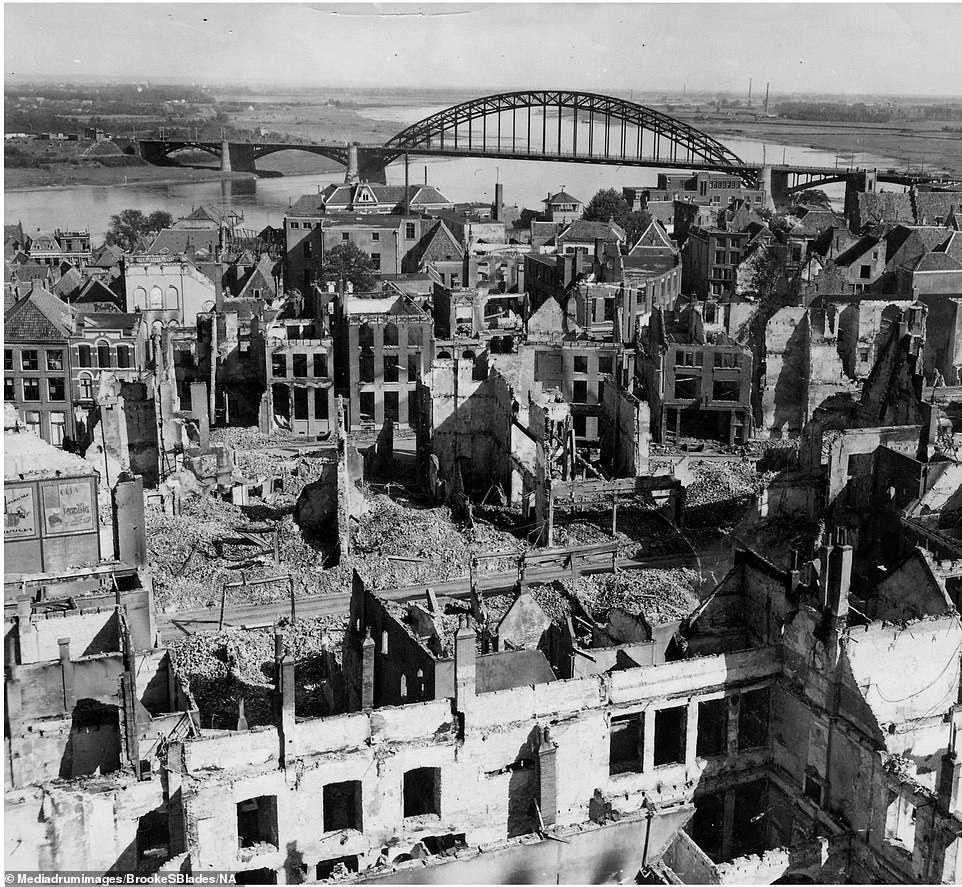 The scope of damage to the town of Nijmegen – a city on the Waal river close to the German border – was reflected by this view in late September or October. The district suffered from heavy fighting to capture the Waal highway bridge (pictured) 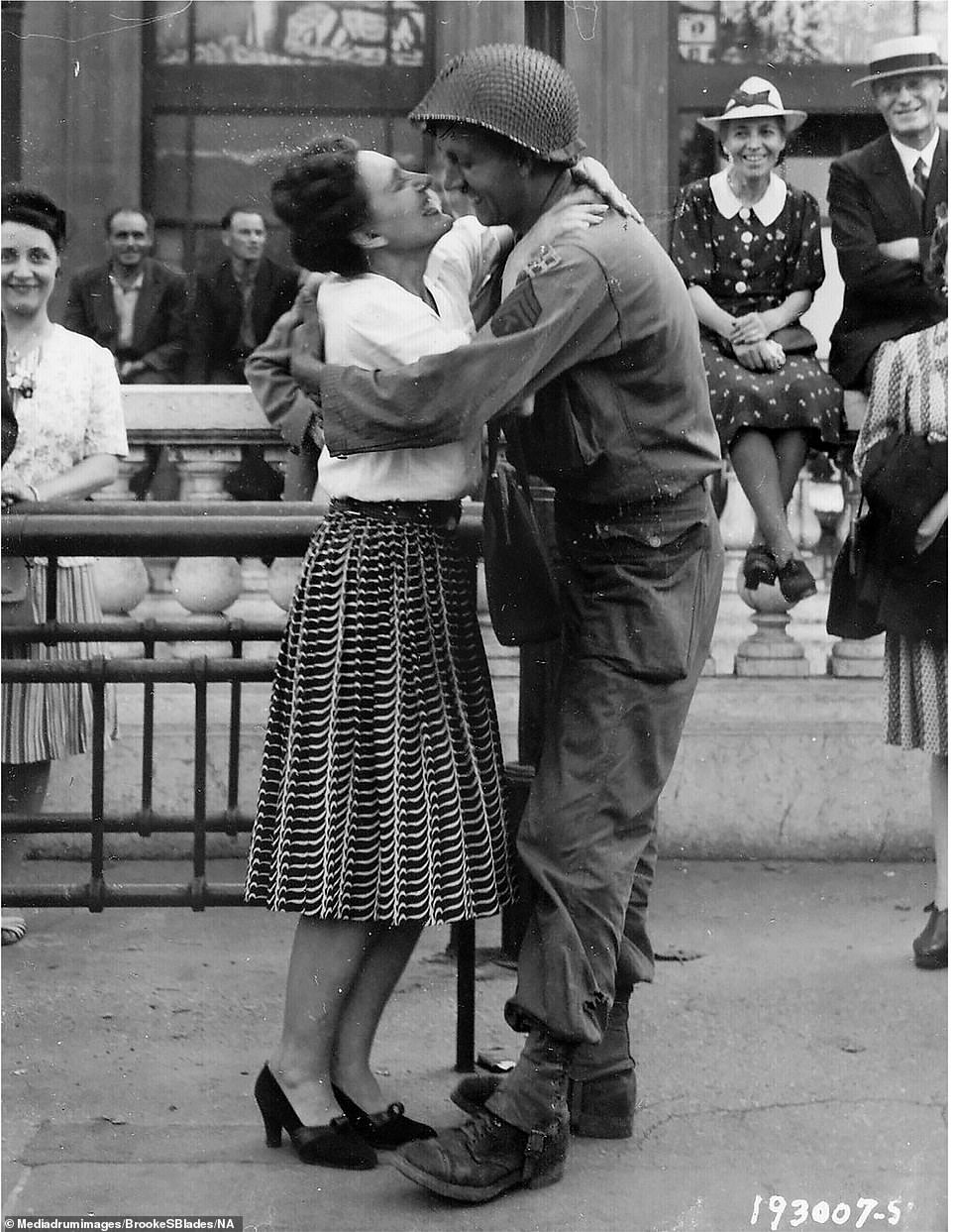 A kiss bestowed on 4th Division Sergeant Kenneth Averill, from Michigan, by a Parisienne on the day following the Liberation of Paris, which was a military battle that took place during the Second World War from August 19 to August 25, 1944 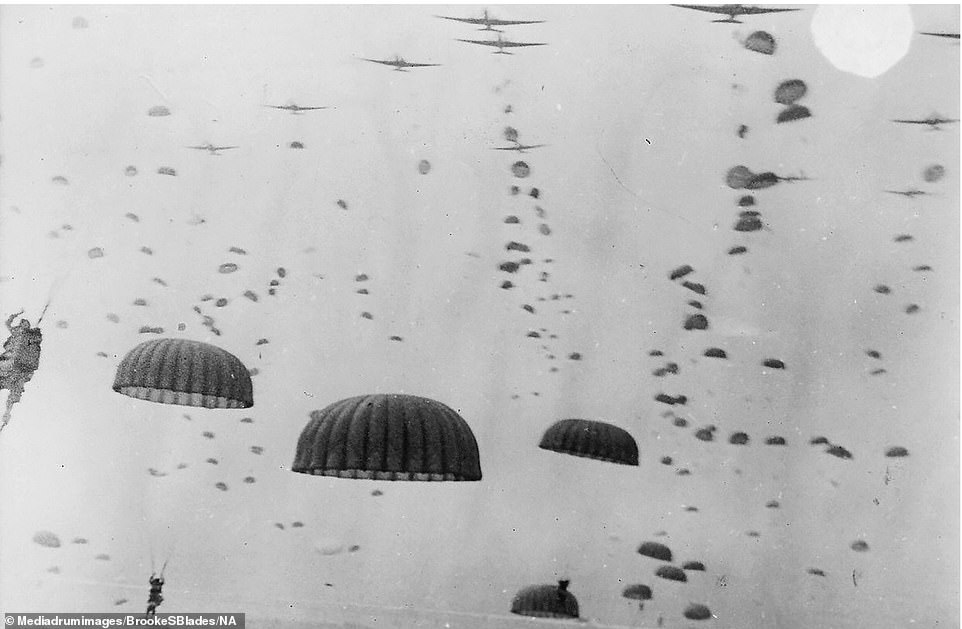 A remarkable series of images by a photographer who jumped during the operation on the 17 September 1944, part of the Operation Market Garden effort. The density of open parachutes was readily apparent during the descent 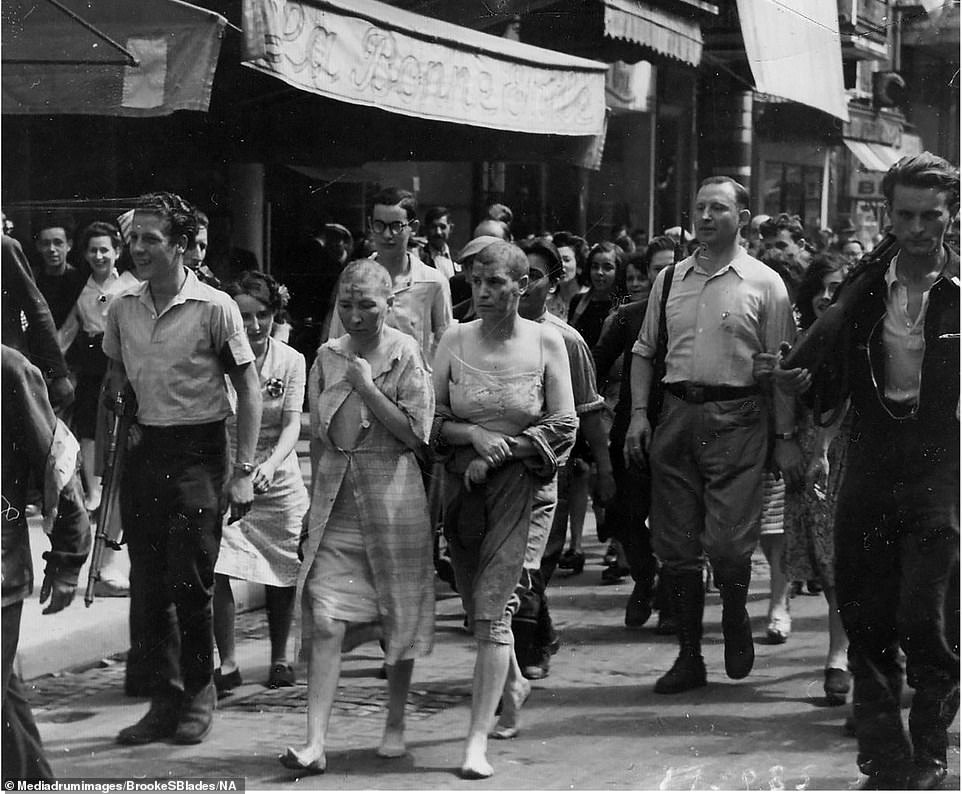 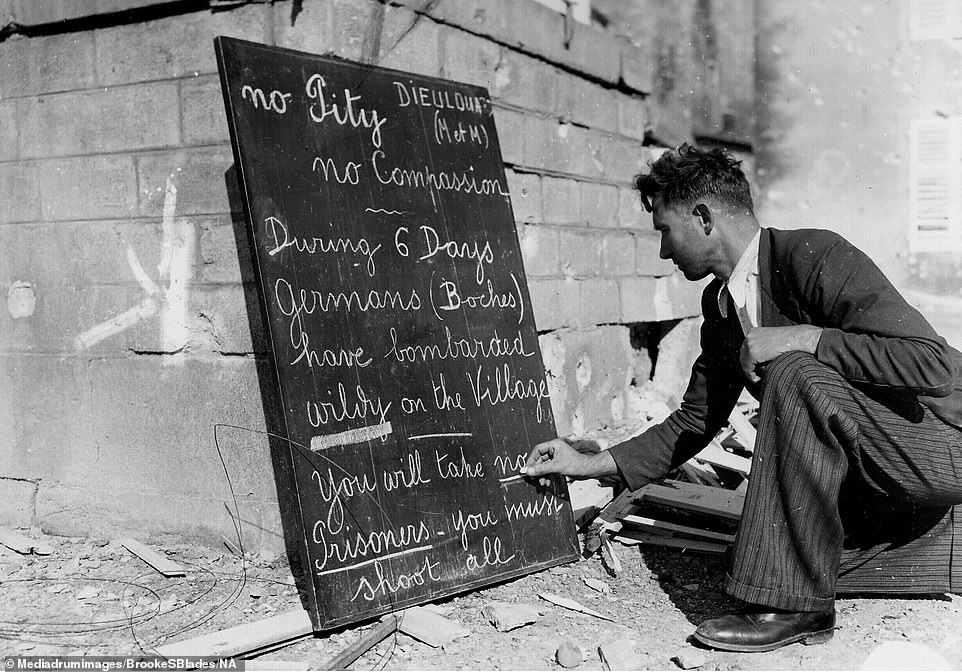 A sign that American forces came across whilst liberating France. The message was simple; no German prisoners were to be taken due to the atrocities they committed in the vicinity 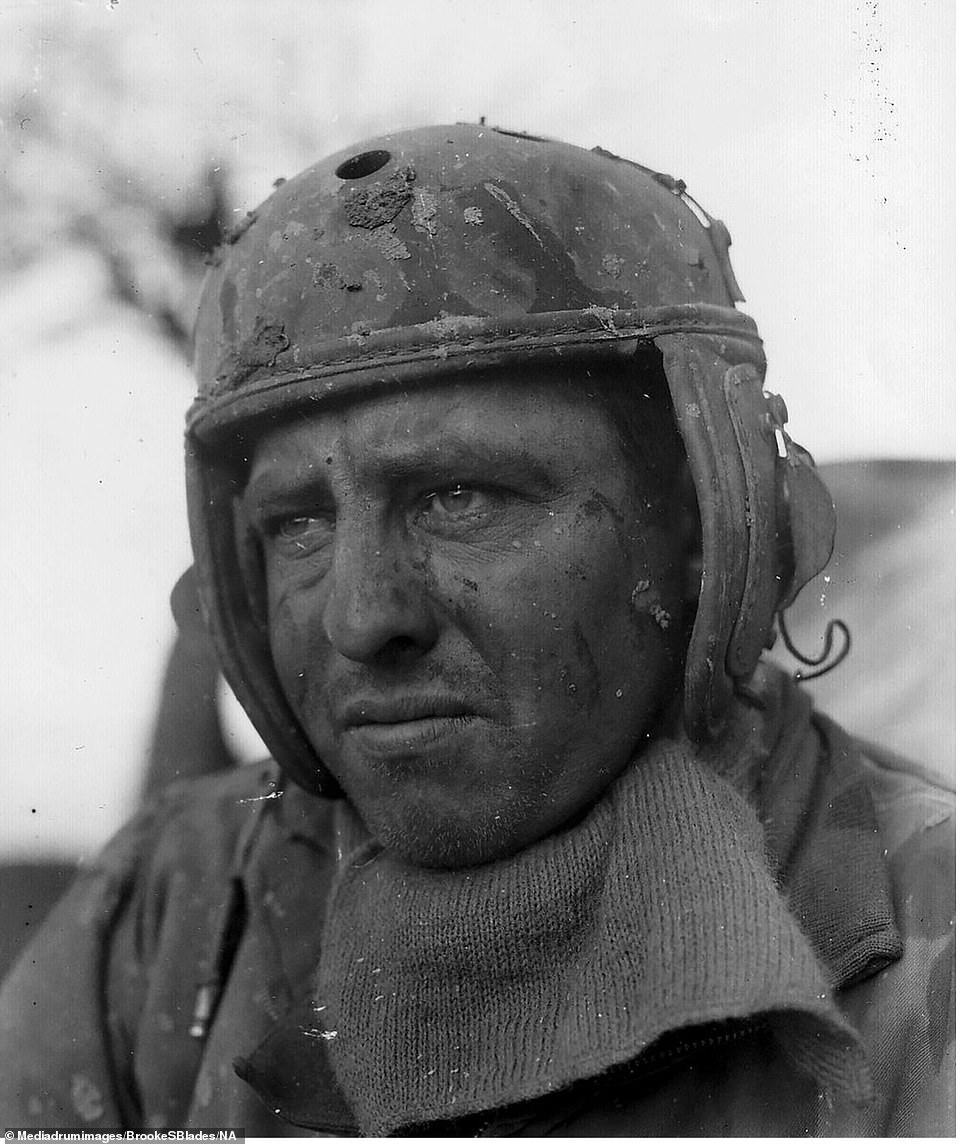 Sergeant John Parks was photographed on December 10 after several days in his tank on the line. Parks, a tank operator who was 24 years old, was killed just days after this photograph of him was taken with a stoic expression 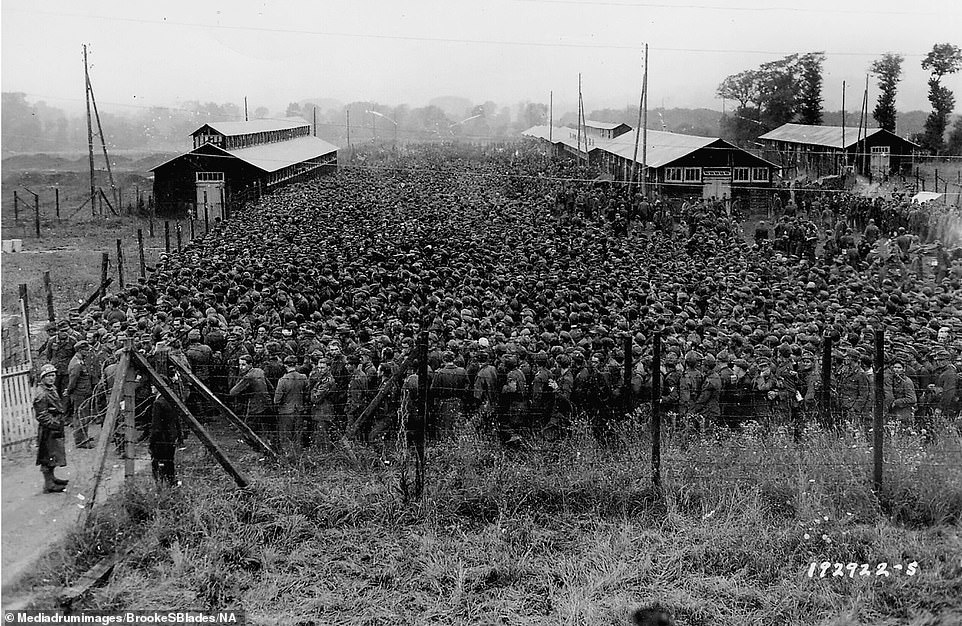 A prisoner of war enclosure near Nonant-le-Pin in the vicinity of Argentan on 21 August. The camp contained some of the thousands of German soldiers who surrendered in the Falaise Pocket 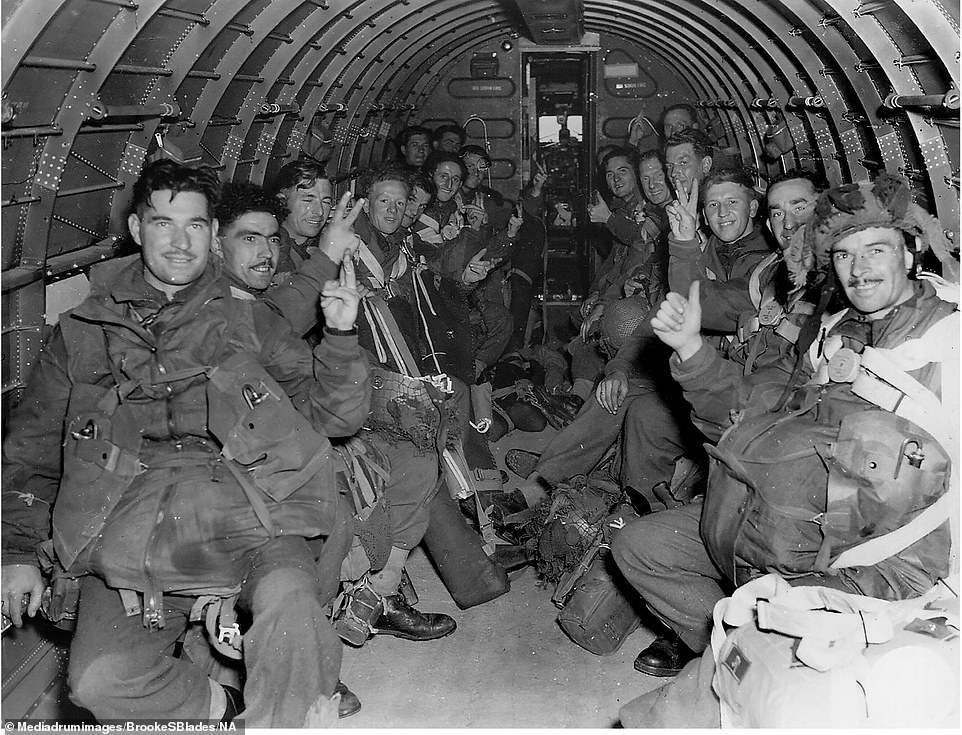 Paratroopers from the 1st British Airborne Division aboard a plane bound for drop zones west of Arnhem on 17 September 1944. The photographer, Poznak, evidently exposed the image before takeoff because he was later with the 82nd Airborne in Nijmegen on 20 and 21 September 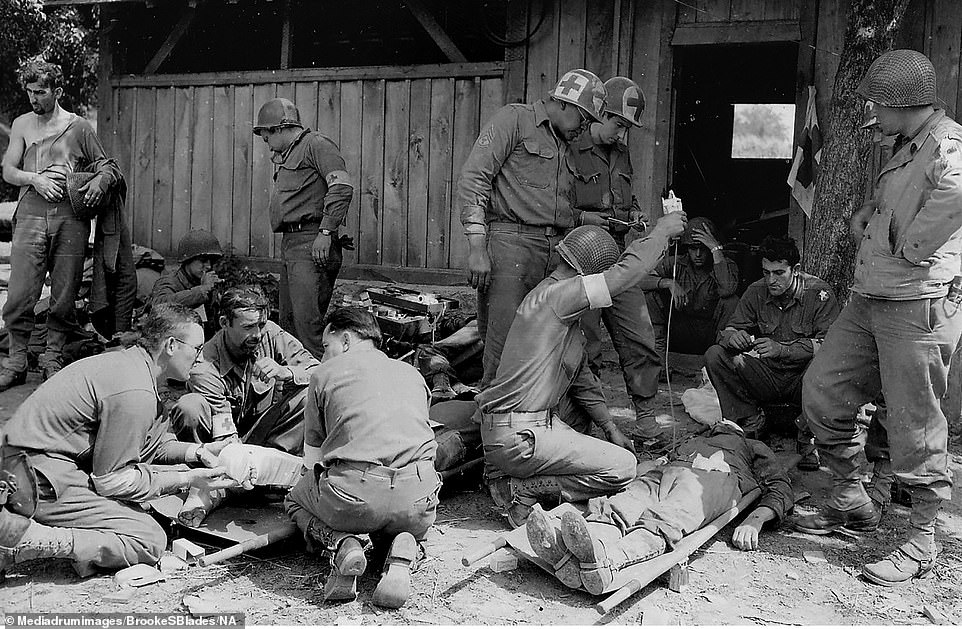 Medical personnel reached formerly isolated troops and established an advance aid station to treat some wounded near Mortain, as shown in this photograph by Salvas on 12 August 1944 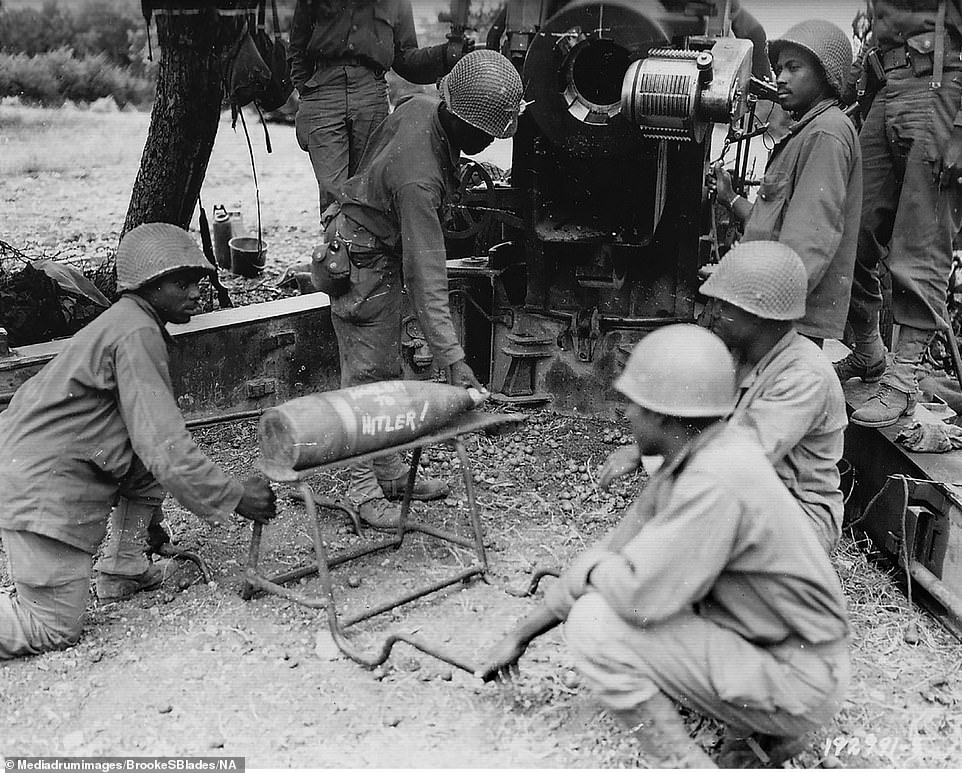 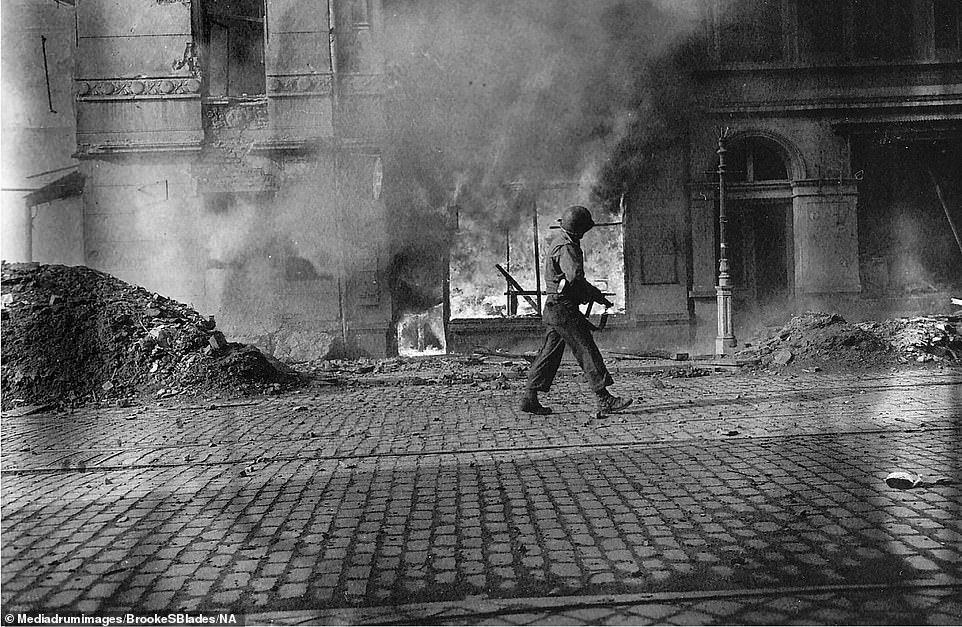 A US soldier walks past a flaming building on the Dutch-German border. The Netherlands was a neutral country at the start of the war, as it had been for a century, but it was then invaded by Nazi Germany on May 10, 1940 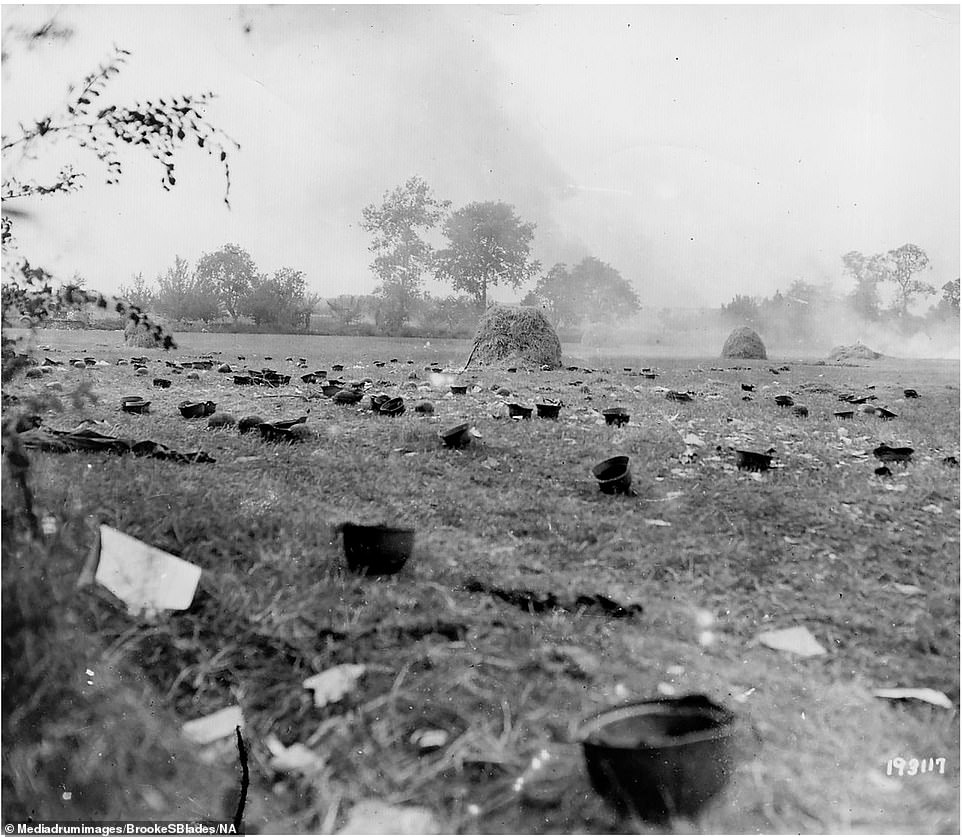 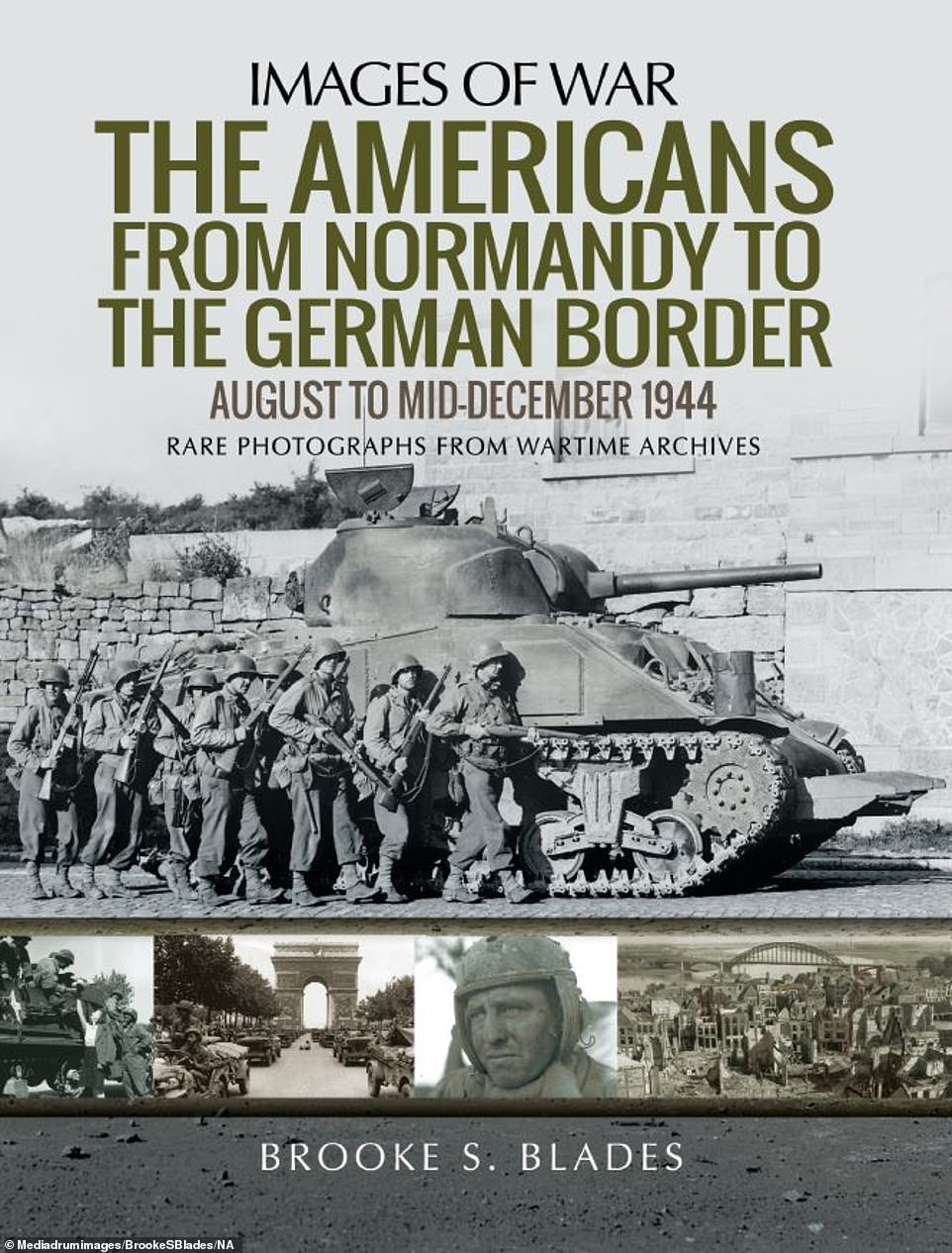 Brooke S. Blades’ new book The Americans from Normandy to the German Border: Rare Photographs from Wartime Archives, published by Pen And Sword, is due for release this September.

Brooke S. Blades’ new book The Americans from Normandy to the German Border: Rare Photographs from Wartime Archives, published by Pen And Sword, is due for release this September.