In State of Union, Trump to make case that America is back

Seeking to move past the shadow of the Russia investigation, President Donald Trump intends to use his first State of the Union address to cite economic progress under his watch while pushing for bipartisanship with Democrats on issues such as rebuilding roads and bridges.

The White House said Sunday that the president would point to a robust economy and low unemployment during his first year and the benefits of a tax overhaul during Tuesday’s address to Congress and the nation.

Aides have said Trump, who stayed at the White House over the weekend as he prepared, is expected to set aside his more combative tone for one of compromise and bipartisanship.

‘The president is going to talk about how America’s back,’ said White House legislative director Marc Short.

President Trump stayed in Washington this weekend to prepare for his first State of the Union address. Here he’s photographed giving his first joint address for Congress last February. Now having have served a year in office, the speech is officially called a State of the Union 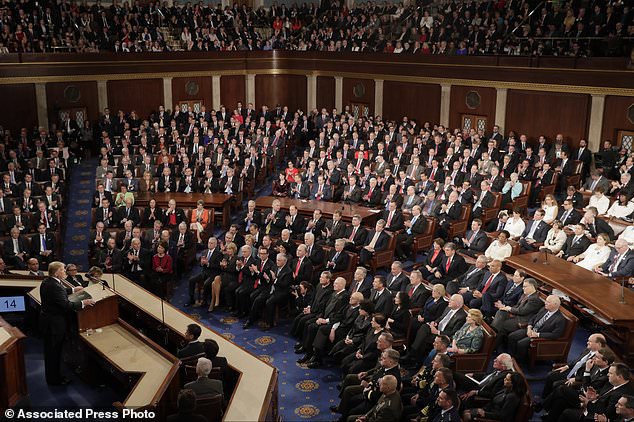 President Trump addresses a joint session of Congress last year. Trump will deliver his first State of the Union address on Tuesday, January 30 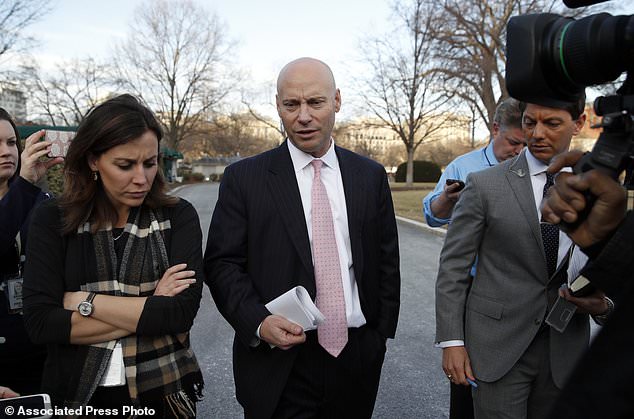 Marc Short (center), White House director for legislative affairs, said Sunday the president will ‘talk about how America’s back’ during Tuesday’s State of the Union 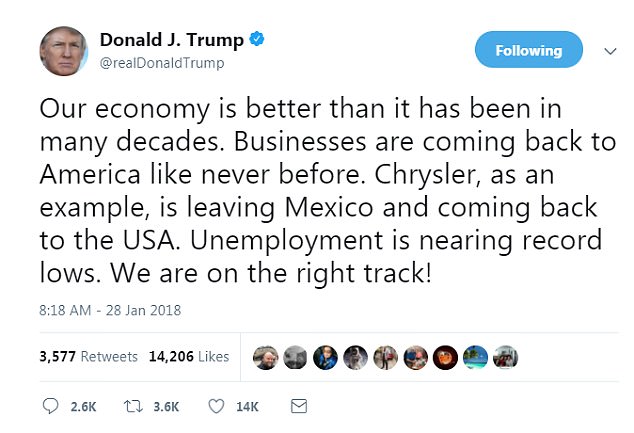 President Trump is expected to tout a strong economy in Tuesday’s State of the Union address. He sang a similar tune in a Sunday morning tweet, proclaiming, ‘We are on the right track!’

Short said Trump would urge Democrats to support additional military spending in light of ‘dramatic threats on the global scene.’

White House officials have said the theme of the annual address will be ‘building a safe, strong and proud America’ and that Trump was looking to showcase the accomplishments of his first year while setting the tone for the second.

‘Our economy is better than it has been in many decades. Businesses are coming back to America like never before,’ Trump tweeted Sunday morning. ‘Chrysler, as an example, is leaving Mexico and coming back to the USA. Unemployment is nearing record lows.’

‘We are on the right track!’ the president added.

As Trump looks ahead, special counsel Robert Mueller’s investigation into possible obstruction of justice and Trump campaign ties to Russian meddling in the 2016 election grinds on.

It often has distracted from the president’s message.

For example, Trump’s address to financial and global leaders in Davos, Switzerland, last week followed reports that he ordered a top White House lawyer to fire Mueller last June but backed off when the lawyer threatened to resign. Trump called the report ‘fake news.’

On the policy front, immigration is an immediate flashpoint for Trump and Congress.

In the prime-time speech Tuesday, the president plans to promote his proposal for $25 billion for a wall along the Mexican border and for a path to citizenship for nearly 2 million young people brought to the U.S. illegally as children.

But some conservatives have warned that the deal would amount to ‘amnesty’ for the young immigrants known as Dreamers, and many Democrats and immigration activists have outright rejected it.

‘I think all of us realize that it’s going to take a compromise on this issue for us to get something done and to protect the Dreamer population, which is certainly a goal of mine,’ said Sen. Susan Collins, a Republican from Maine. ‘But I think the president is also right about border security, that we do need to beef up our border security.’

Part of Trump’s goal in the speech is to set the course of the debate as Republicans look to retain their majority in Congress.

He is expected to say the tax overhaul will unleash economic growth and he will point to companies that have provided their employees with $1,000 bonuses and other benefits.

Trump plans to outline a nearly $2 trillion plan that his administration contends will trigger $1 trillion or more in public and private spending on roads, bridges and other public works projects.

On trade, Trump will note his preference for one-on-one deals instead of multilateral agreements, building on his speech at the World Economic Forum in Switzerland.

And he will offer an update on the fight against terrorism and his view of international threats, including North Korea.

A senior administration official providing a preview of the speech said Trump probably would avoid the taunts of ‘Little Rocket Man’ for Kim Jong Un and ‘fire and fury’ that he used before. The official wasn’t authorized to speak publicly and spoke on condition of anonymity.

The address comes at a critical point for the president.

He is battling poor approval ratings and is trying to move past the government shutdown that coincided with the anniversary of his inauguration.

He’s also preparing for a grueling midterm election season that has tripped up other first-term presidents.

Trump was not expected to embark on an extensive sales pitch around the country after the speech.

He plans to address a Republican congressional retreat in West Virginia on Thursday.

Vice President Mike Pence will attend a tax overhaul event in West Virginia on Wednesday and speak to the GOP congressional retreat later in the day.

Pence will hold events in the Pittsburgh area Friday.