Political activist Femi Oluwole has fired up a fierce debate over television news presenters wearing poppies to mark Remembrance Day – after questioning why the BBC doesn’t let its stars ‘also show they believe in equality for black or gay people.’

The equality campaigner followed up a now-deleted tweet on the issue with an appearance on Jeremy Vine’s Channel 5 show on Tuesday, where he suggested that if wearing a poppy was a ‘moral absolute’ then symbols for race and LBGTQ equality should also be allowed.

His remarks saw his name quickly trending on Twitter, with many social media users criticising Oluwole for ‘politicising’ the poppy, leading him to clarify what he meant in the original tweet. 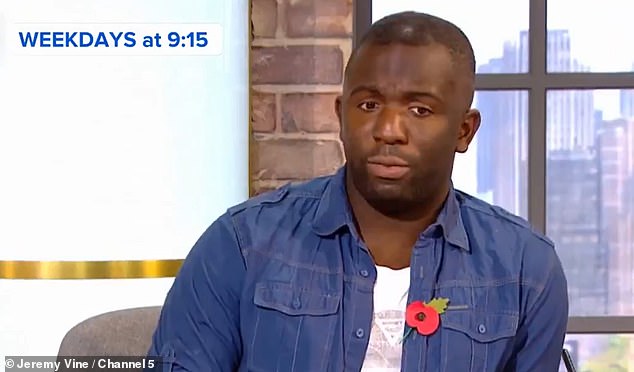 Equality campaigner Femi Oluwole appearing on the Jeremy Vine show yesterday after his tweet asking the BBC ‘Why are your presenters wearing poppies?’ went viral

In his first missive, Oluwole wrote: ‘Dear @bbc, Why are your presenters wearing poppies?

‘Your rules ban “virtue signalling no matter how worthy the cause”. If presenters can support war-related campaigns on the news, surely they can show they believe in equality for black and gay people? Or is that against BBC values?’

While many agreed with his argument others said the tweet ‘politicised’ the poppy, and that it shouldn’t be viewed in the same way as the fight for equality.

@darrengrimes_ responded: ‘Don’t use dead soldiers to make political points. It’s not hard. Show some respect. People who made the ultimate sacrifice for this country are off limits.’

@TroubleBlooded added: ‘Getting really tired of people saying “virtue signalling” in every argument they have!

‘Can’t people use their own brains/ ideas anymore? I wear a poppy every year out of respect for my grandparents and it heartens me to see presenters wearing them too.’

‘All are worn for the same reason, to respect the people they represent.’

After Oluwole defended his tweet on the Jeremy Vine show yesterday, getting into a fierce debate with journalist Carole Malone, who disagreed with him, he took to Twitter once more afterwards to clarify his thoughts.

The increasingly high profile activist wrote: ‘The poppy is different because it’s something we all share. Racial inequality hurts all races. The tensions in society harm the society. We all share a need for equality.

‘I say that if poppies can be treated as an “moral absolute” which therefore cannot be questioned, then so can equality.’

MailOnline contacted the BBC for comment. A spokesperson said: ‘The poppy is recognised as a symbol of national remembrance for those who have died in conflict, and especially in two world wars, and the BBC has a long standing convention of allowing its presenters, reporters and pundits to wear poppies on screen if they wish to in the run up to Remembrance Day.’