While the North Queensland Cowboys will host a maiden preliminary NRL final at their brand-new stadium in Townsville on Friday night, a crucial slice of history from their old home remains.

As the players run onto the field they will tap their hands on a strip of signage transplanted from their old stadium that bears the words ‘You are now entering Cowboy’s Country’.

That message has been a reminder for all Cowboys players, male, female, junior and senior for 27 years to always remember where you come from.

NQ Gold Stars fullback Romy Teitzel touches the sign that has now been moved to the new Queensland Country Bank Stadium. The Cowboys women’s team will play NRLW in 2023 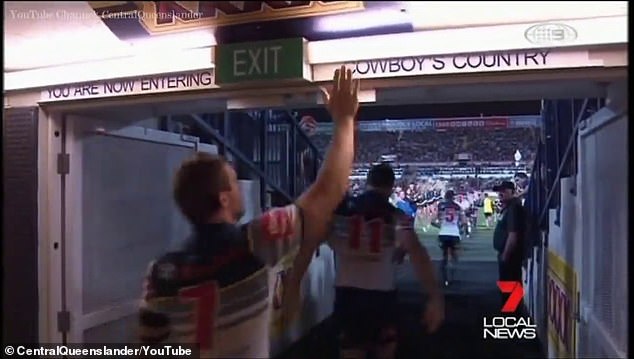 It is a critical piece of signage that was the final instalment in a stadium the Cowboys had to largely build themselves when they were granted entry into the ARL in 1995.

The sign is a timeless icon that represents the team’s DNA and remains a big part of what has powered the current crop of players to the verge of the 2022 NRL grand final after everyone down south wrote them off.

Finding elite players was challenging to say the least and few wanted to move to the heat and humidity of Townsville to play for a cash-strapped new franchise that was destined to fail on the field in its first year. 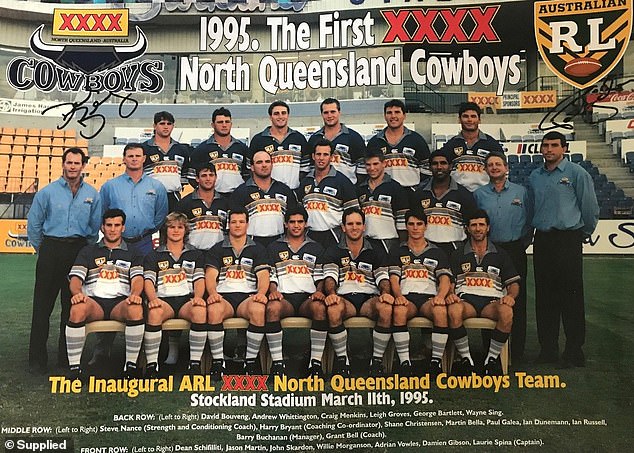 So inaugural coach Grant Bell set about assembling the finest North Queensland talent he could find on a shoestring budget.

Paul Bowman, who would go on to play 203 NRL games and 12 State of Origins for the Maroons, was paid just $1000 plus match fees. 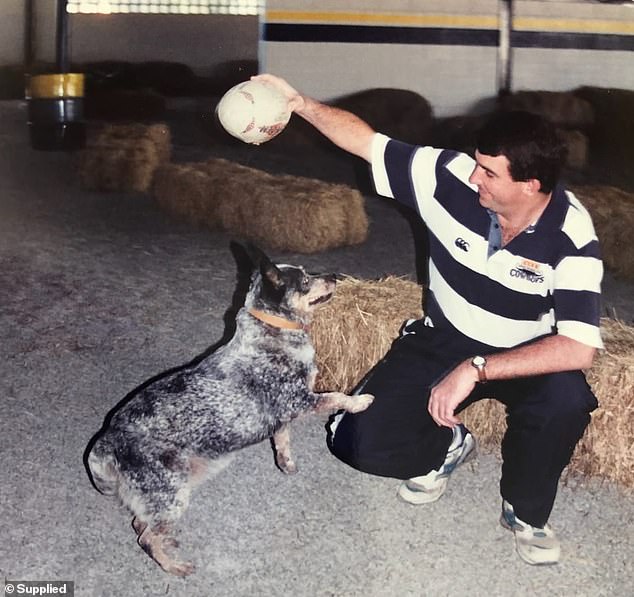 Inaugural Cowboys coach Grant Bell with his pet dog Cassie, who become an official part of the team and the inspiration for the club’s mascot Bluey

‘So there is a really rich history and we wanted to pay homage to that and to bring on the next crop of those players in the highest level without them having to leave home.’

It was a tough year on the field, with just two wins and the dreaded wooden spoon. But the mission was to build a culture and a brand that North Queenslanders could be proud of.

It all began with the rag-tag group of old heads and rookies from the north converting an old trotting track into their own stadium.

Perhaps one of the most North Queensland moments of all came when they defeated Western Suburbs 31-12 in front of 18,197 loyal supporters to record their first victory at the stadium they built. 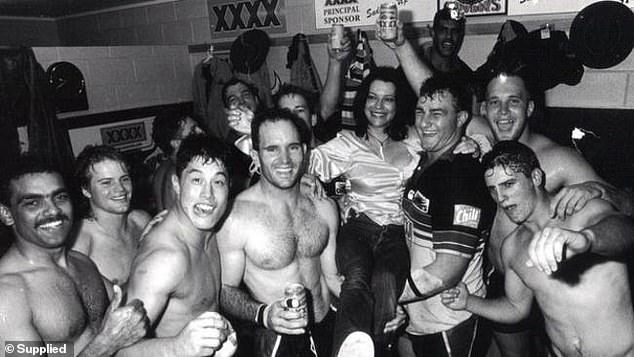 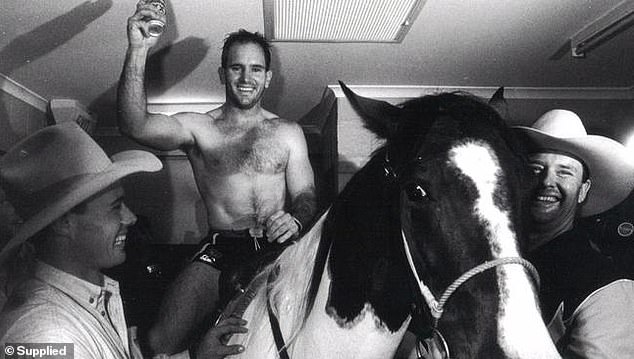 Entertainers and even Buck the horse were invited into the change rooms to celebrate, with several players including Adrian Vowles and Andrew Whittington taking turns to sit on the steed, XXXX tins in hand.

A total of 25 players that would go on to play first grade that year were from North Queensland, including club legends like Paul Bowman and John John Buttigieg along with coach Grant Bell and his faithful Blue Heeler Cassie, who would become the inaugural club mascot ‘Bluey’.

They were not gifted a ready-to-go stadium like many other clubs, and instead had the arduous task of trying to convert the old horse trotting track into an international-standard football venue. 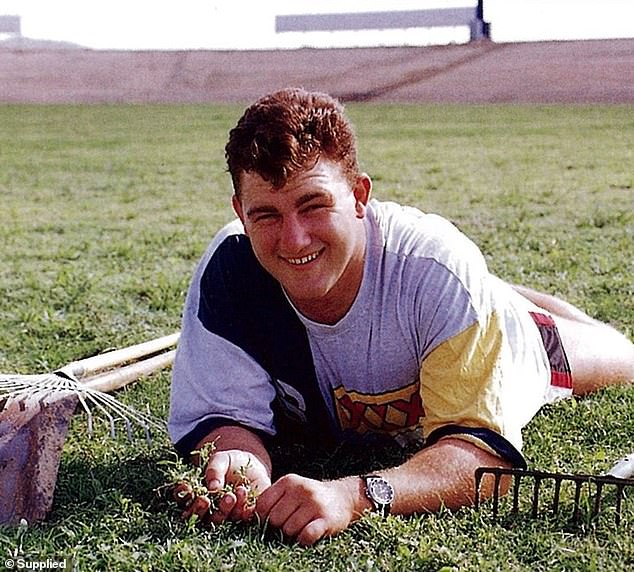 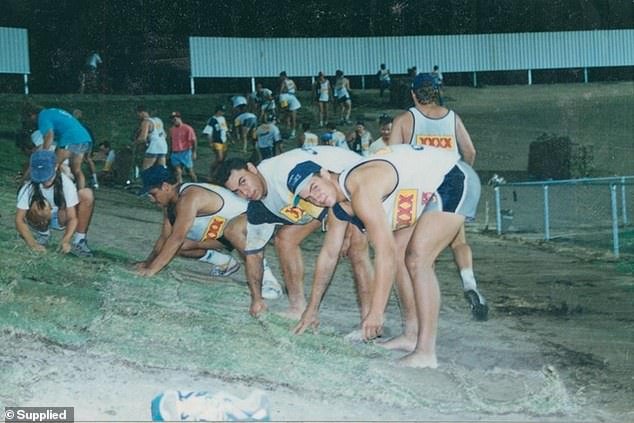 Around eight players were employed permanently by the club including starting prop Whittington, who became the unofficial club groundsman, helped by other players such as Martin Bella.

Bell and Wayne Sing helped install the plumbing and re-lay the floors at the the old stables to create a makeshift gym while Paul Galea re-laid the blocks to create office spaces.

After training, the players would head to the stadium to lay the turf. When torrential rain washed all their hard work into a sodden mass at the bottom of the hill in the week leading up to their first ever game, they had to do it all over again.

One of the problems was the ‘roos were coming in and eating the turf at the night time. So we had to put an electric fence around the field to try and slow ’em down.

Not only was a club building its own stadium truly unique in rugby league, there were also some peculiarly North Queensland challenges. 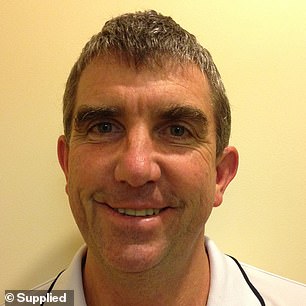 ‘One of the problems was the ‘roos were coming in and eating the turf at night time. So we had to put an electric fence around the field to try and slow ’em down,’ Bell recalls.

‘When we got all the turf down, the irrigation system was in but the power wasn’t in. So Bowie [inaugural Cowboys CEO Kerry Boustead], myself and Andrew Whittington were taking taking turns sleeping out overnight at the stadium and turning the sprinkler banks on and off manually.

‘I don’t believe there’s been any club before and there certainly won’t be another club again that builds its field, builds its stadium and builds its training quarters and contributes so much as the players did in that first year.

‘For most of them, that was the destination. It wasn’t a stepping stone to go onto brighter things.’

While there was a host of young guns looking to do their region proud, there were also two established ARL talents that the club called out of retirement to help build their culture and DNA.

They were inaugural captain Laurie Spina, who was five years retired from the ARL and happily running a cane farm in the town of Ingham, along with former Wests, Illawarra and Warrington hard man Craig Teitzel, who ran the family butcher shop in Tully. 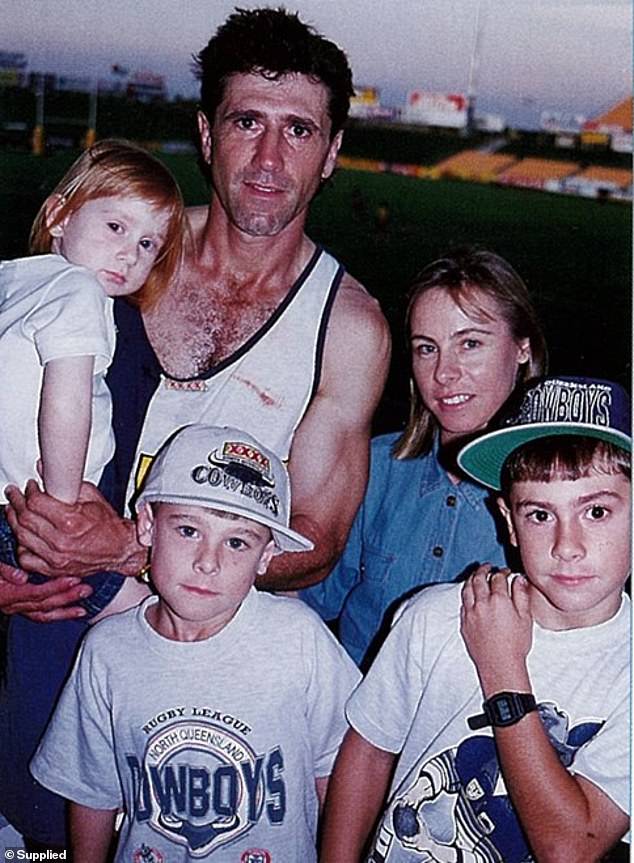 Laurie Spina and his family. Spina had not played in the ARL for five years and was working on the family cane farm and playing for the Herbert River Crushers in Ingham before coming out of retirement to be the inaugural Cowboys skipper

While their best playing days were well behind them, the experience, profile and genuine North Queensland DNA they brought to the club would reap benefits for decades to come.

‘They would drive back and Craig would sometimes sleep over at Laurie’s, other times he would drive straight through to be ready at the butchers first thing in the morning to chop up a bit more meat ready for the customers.

‘It helped the club and it helped the players in that first part, so I think that was really important to the club.

‘They brought some values and they made a statement about what the club was about.’ 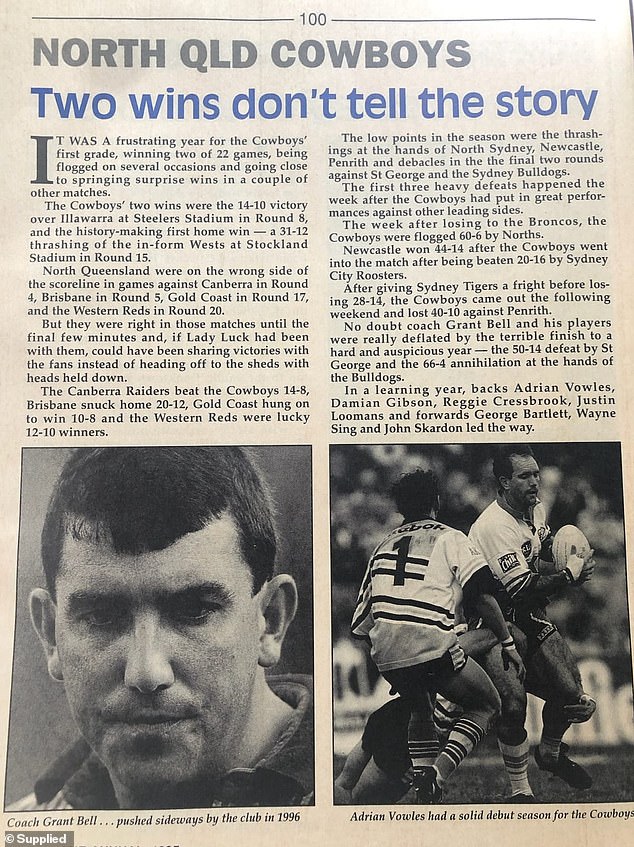 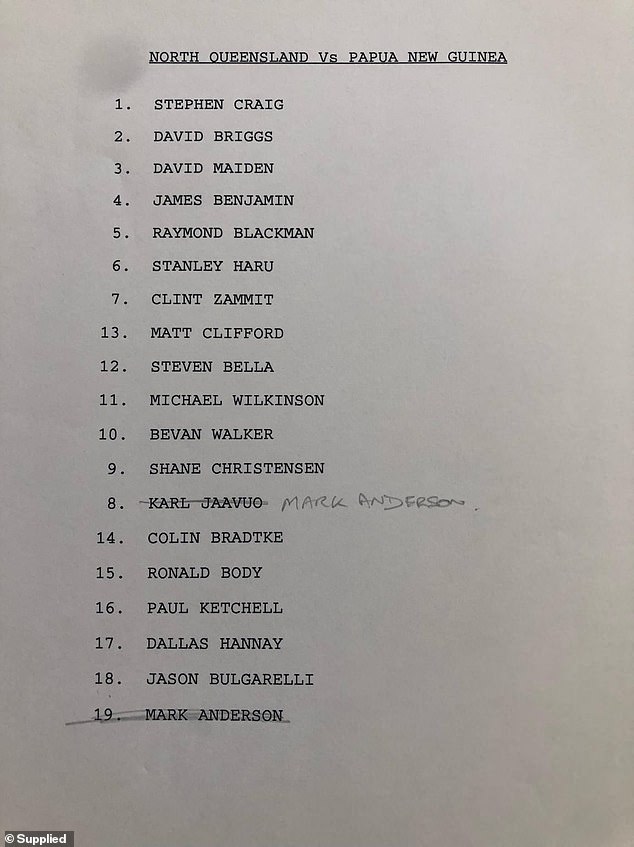 One of the very first ever NQ Cowboys team sheets from 1993, featuring a host of local players including future recruitment manager Clint Zammit, Matt Clifford (the father of former halfback Jake Clifford) and Dallas Hannay, the older brother of Josh Hannay

The arrival of the Cowboys in 1995 was also made possible by the community, with the club benefiting from the largest geographical footprint in the NRL, stretching north to the cape, south to Rockhampton and west to Mount Isa.

Local businesses lined up en masse to offer their support in setting up the club while supporters continue to drive 500km round trips and longer to support their team.

‘There were lots of machine operators that could come out to drive trucks of an evening to move the dirt and make the mounds for the hills,’ Bell said.

‘The public were enormous in what they did. There were companies that donated things like glass for the windows, the corporate boxes, some aisles – there was so much that was donated or given at a very cheap price to help build the stadium. 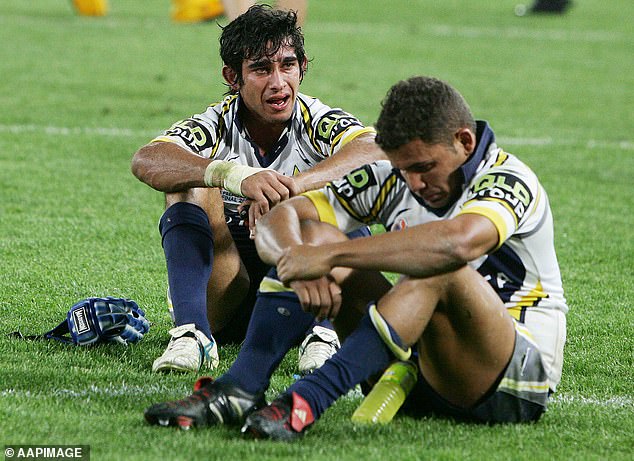 ‘It wasn’t just the players that built the place, it was players and the community that got in.’

The culture built back in 1995 paved the way for a host of North Queensland champions finishing their careers as one-club players at the Cowboys.

It paved the way for soaring success including the highs of reaching a maiden grand final in 2005 and the shattering pain of losing that decider to Wests Tigers.

Eventually,  the club climbed the mountain with a watershed premiership in 2015. 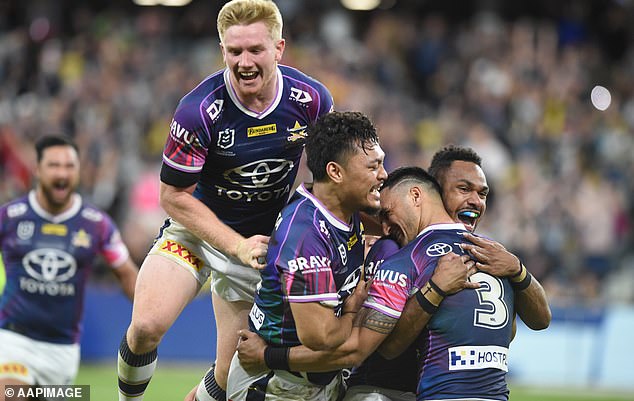 While the hard work the players of 1995 imprinted onto the DNA of the club came almost three decades ago, Bell said he can see the same qualities in the current crop of players as they press for the club’s second premiership.

‘I could picture the mixture of players at the Cowboys doing it [building a stadium from scratch] again,’ he said.

‘The Cowboys now are full of local juniors, full of gratitude and appreciation for the opportunities that they’ve got and what North Queensland has given them whether they are a local or whether they have come in.

‘I think there are a lot of similarities and certainly a lot of alignment in what we wanted to do in 1995 to what they are actually achieving in 2022. 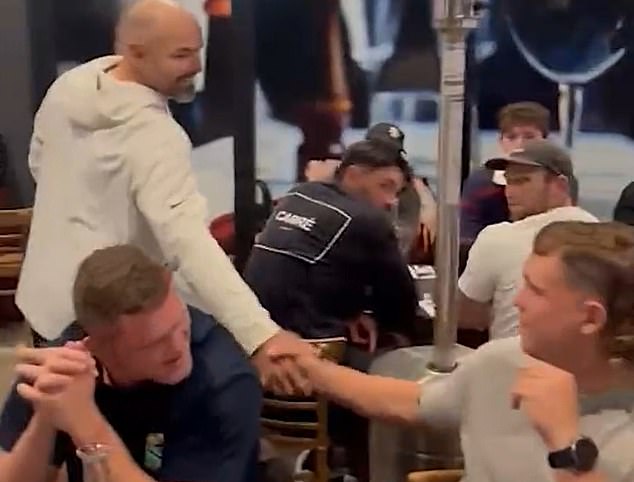 ‘For them it has been quite important which I think is nice, they appreciated the history to that level.

‘I think it was really important that Todd recognised things like that and has encouraged and promoted the players to have the same sort of ownership and belief.’