Formula 1 car of the sky: Incredible 16ft-wide manned drone that can fly at 87 MPH with a person on board performs rolls and loops on its maiden flight

An incredible manned drone described as being like a Formula 1 car in the sky can perform rolls and loops at 87MPH – even when there is a human on board.

The ‘Big Drone’ had its maiden flight in Croatia with CEO of the Drone Champions League, Herbert Weirather, in the hot seat while a remote pilot made it loop and roll.

The drone, designed around the monocoque of a formula one car, is about 16ft across with 12 large motors and propellers keeping it aloft.

The Drone Champions League started with small drones but ‘they were too small for people to follow’, according to Weirather. He said ‘we made it bigger’. 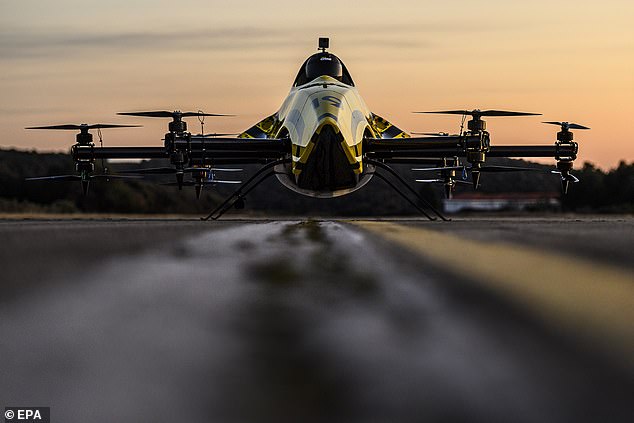 It has 217 brake horsepower and produces 660lbs of static thrust. It will be used in a new competition as part of the Drone Champions League

They are now recruiting for people to remotely fly the massive 217 brake horsepower craft from a pool of people playing Drone Champions League – The Game.

Initial testing saw the drone fly around Vrsar in Coratia and was described by the company as a ‘historic maiden flight milestone’ towards a racing tournament.

Weirather sat in the single-seat machine as it was piloted remotely by former Drone Champions League contender and multi-discipline champion Mirko Cesena.

The Big Drone can fly up to 87 miles per hours using 12 motors and propellers producing 217 brake horsepower. It can carry up to 368lbs at take off.

It will be the base of a ‘brand-new future racing experience’ and the Drone Racing League are on the hunt for pilots to ride inside the looping craft. 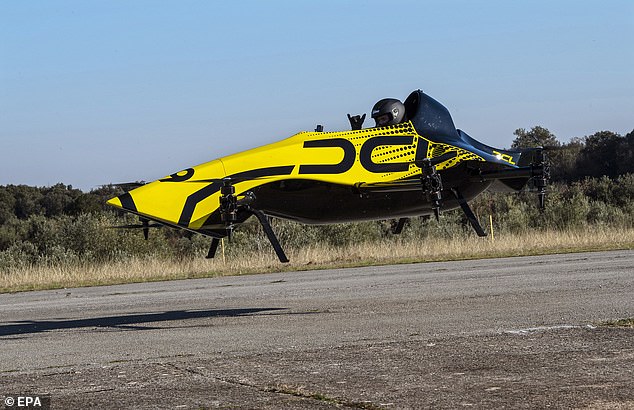 Blurring the lines between virtual and reality, the Drone Champions League was created in 2016 to bring together the best pilots of small racing drones in the world.

The smaller drones can reach speeds of up to 99 miles per hour in head-to-head battles and pilots are recruited from players of drone computer games.

WHAT ARE THE BIG DRONE’S STATS?

They hold Drone Grand Prix races across the world, but wanted to find a way to take it up a notch – and make the whole thing bigger.

Weirather said people kept complaining it was difficult to follow the action with the small drones – so they made them bigger, but people still complained.

During the process of finding the right size, they eventually made a craft big enough to take a human pilot on board – that’s how the ‘Big Drone’ was born.

‘Basically we started with very small drones, it was super fast and nobody could really follow, so we made it bigger, and bigger and people said it was still too small.

‘So we made a really big one that means potentially we can have manned drone racing one day,’ said Weirather. 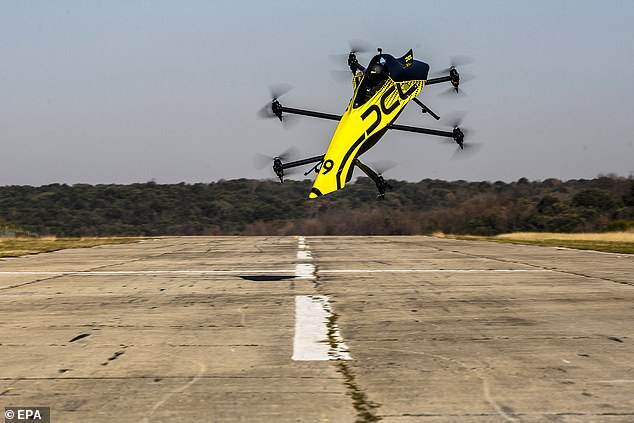 The craft is able to make loops, rolls and fast turns which will all form part of the new tournament when it launches 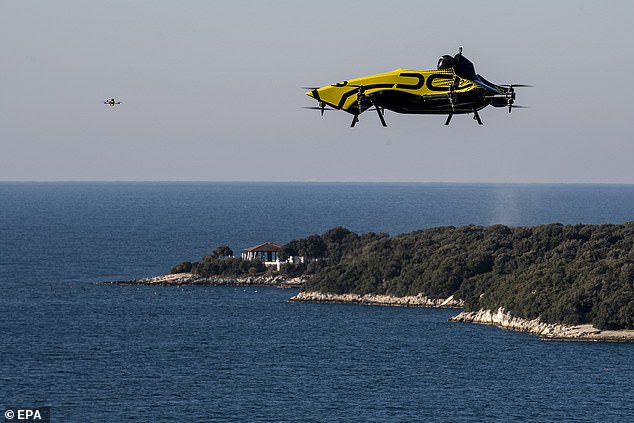 During the test the drone was even flown over water, as seen here, and will be used in head to head races with a remote pilot and on board passenger 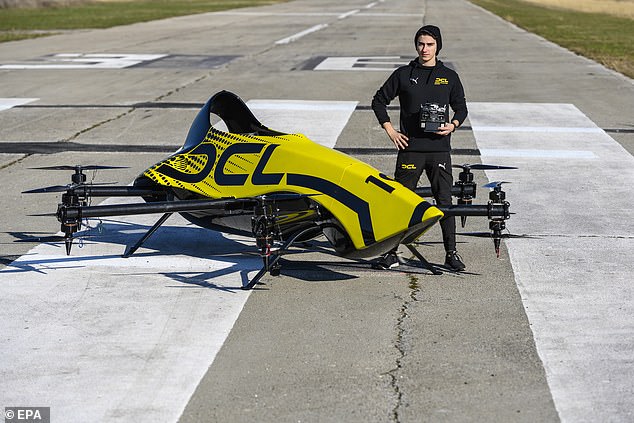 Weirather, pictured, said they were on the hunt for pilots to work with the Drone Champions League and would be recruiting through a computer game available on consoles

The Big Drone has been months in development but in early February they were able to take it to Vrsar for outdoor testing – after initial indoor flights in Germany.

Members of Flite Test were at the initial flight – they produce content on YouTube and other platforms to serve the RC community.

‘I feel like this experience is honestly a new chapter for multi-rotors,’ said Josh Bixler from the radio control vehicle group.

‘To be able to have kids go into the hobby and aspire for bigger things is always a goal of Flite Test. To see them now aspire to actually fly a manned multi-rotor is absolutely incredible.’

Drone Champions AG, the company behind DCL, will continue to refine the Big Drone ahead of a yet to be confirmed future tournament.

WHAT IS THE US GOVERNMENT DOING TO IMPROVE DRONE TECHNOLOGY?

President Donald Trump signed a directive in 2017 to establish the ‘innovation zones’ that allow exemptions to some drone regulations, such as flying over people, nighttime flights and flights where the aircraft can’t be seen by the operator.

States, communities and tribes selected to participate would devise their own trial programs in partnership with government and industry drone users.

‘Data gathered from these pilot projects will form the basis of a new regulatory framework to safely integrate drones into our national airspace,’ US Secretary of Transportation Elaine Chao said in a statement.

Ms Chao, who called the rapidly developing drone industry the biggest development since the jet age, said about 150 applications were received.

The unmanned aircraft industry has pushed for relaxed restrictions, and the Trump administration has said current regulations have limited drone use, forcing companies to test overseas.

Steven Bradbury, a lawyer for the federal Transportation Department, said drones have caused some ‘apprehension’ with the public but one of the initiative’s biggest goals will be increased ‘community awareness and acceptance’ of unmanned aircraft.

Mr Bradbury said there is no direct federal funding for the test program.