The Fiji rugby sevens celebrated their country’s second ever gold medal by breaking into a spine-tingling rendition of a traditional song.

Fiji defended their Olympic title on Wednesday, beating New Zealand 27-12 at the final in Tokyo.

After singing the national anthem on during the medal ceremony, the emotional team performed the hymn E Da Sa Qaqa – which translates to ‘we have overcome’.

Captain Jerry Tuwai is a two-time Olympic champion and his squad have given the people of their Pacific island nation something to celebrate during the Covid-19 pandemic.

The government declared a national holiday and the central bank printed $7 notes to commemorate Fiji’s gold medal – the country’s first Olympic medal of any kind – when rugby sevens made its Olympic debut in 2016.

Tuwai’s squad have been on the road in a bio-secure bubble for several months, and still have to quarantine when they gets back to Fiji.

The sacrifices from players and staff, their families and their supporters made the Tokyo gold medal more significant than the first one for Tuwai, a father of three.

‘It’s more special,’ he said. ‘We’ve been away from our family for about five or six months. I think this one is special.’ 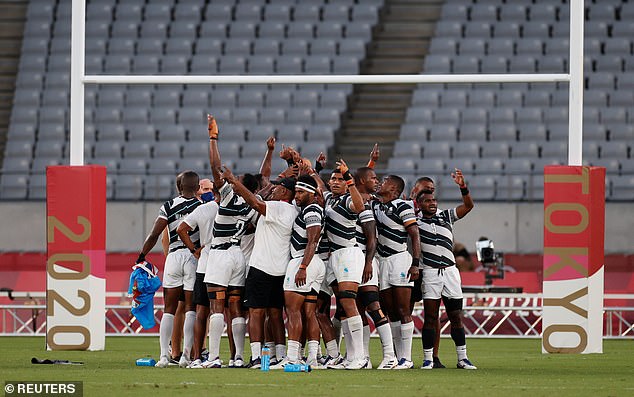 Pictured: Fiji’s rugby sevens after winning the game on Wednesday against New Zealand in Tokyo

But there’ll be no wild celebrations in the streets across the country this time, for the health and well-being of everyone.

Relative to its population of less than 1 million people, Fiji’s outbreak is currently among the worst in the world.

Fiji reported a record 1285 new cases in a daily update on the eve of the Olympic final. It has reported 193 deaths since the outbreak began in April.

Rugby is the national sport in both Fiji and New Zealand but rugby sevens means more to Fiji due to their long history of success in the fast-form game.

Succeeding as a small nation against the odds, against bigger brothers, it’s particularly good for Fiji.’ 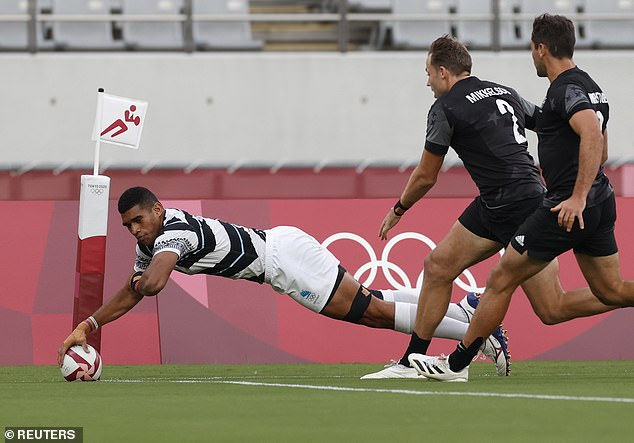 The silver was a big improvement for the New Zealand men’s team after they missed the podium when rugby sevens made its Olympic debut at Rio de Janeiro in 2016.

All the rugby sevens medals at the Tokyo Games went to the Southern Hemisphere, with Argentina beating 2016 finalist Britain 17-12 for the bronze.

South Africa, the bronze medalist in Rio, beat the United States 28-7 in the playoff for fifth place. Australia beat Canada to finish seventh.

The Fijians were always in front in the final, just as they were in Rio, scoring three first-half tries to lead 19-12 at the break.

When Asaeli Tuivuaka raced over to score in the right corner with about two minutes remaining, another title was assured.

The classification for 9th-12th was completed in the morning session, with Kenya beating Ireland 22-0 for 9th and 2016 semifinalist Japan finally getting a win to finish off a disappointing campaign at the Tokyo Games – albeit to avoid last place with a 31-19 comeback over arch rival South Korea.