A number of bemused applicants eyeing off a job were left wondering if a key aspect of the advertisement was actually a deliberate mistake.

However, the specialised project-style business shouldn’t expect too many quality candidates given their paltry salary offer of between $5 and $8 per hour.

An upside was the ‘dream role’ could be done remotely.

One reddit user re-posted the job with the accompanying question – is this even legal?

To be considered for the role with Paragon Global, applicants need to have at least four years experience in marketing and copywriting as well as display proficiency with content management systems such as WordPress.

A portfolio of published articles is also mandatory as is a university degree in marketing, communications or journalism.

Many people responded on reddit that the salary offer must be a glaring error – and perhaps was a deliberate ploy.

‘$50-80 (per hour) would be about in the right ballpark for this role. Definitely a typo,’ one said.

Another commented ‘I expect one of the interviews questions was, ‘did you spot the typo in our ad?’ 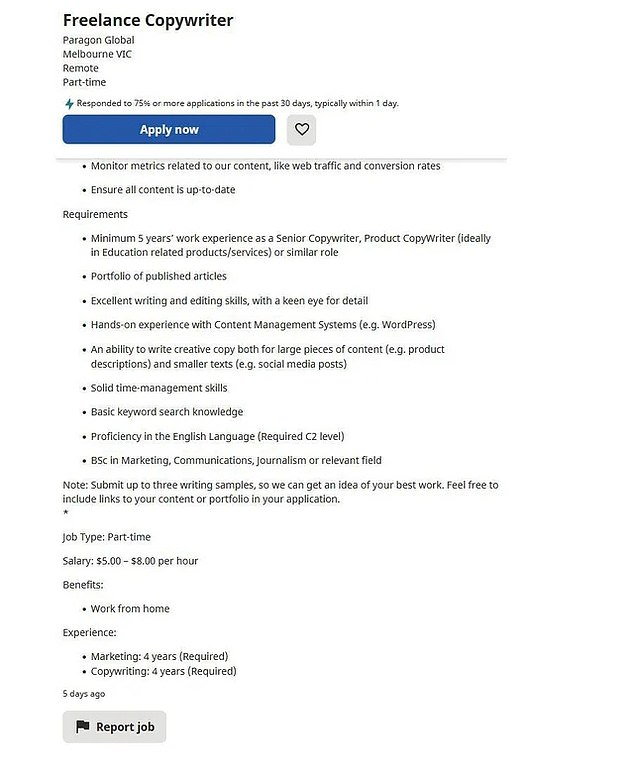 Incredibly, as of November 16, the employment ‘opportunity’ still remains up for grabs on the Indeed website.

It was initially posted six days ago.

On their website, Paragon Global Investments state the company was established to bring new ideas to the market through ‘traditional angle investment as well as internal projects.’

Renowned ‘sales king’ and author Aaron Sansoni is listed as the company CEO.

Daily Mail Australia has reached out to Paragon Global Investments for comment.