Police said the wicketkeeper-batsman, who was alone in the car when it crashed in the northern state of Uttarakhand, had lost control of the vehicle when he ‘dozed off’.

The car hit the median strip and flipped over twice and burst into flames, police claimed, while photographs taken in the aftermath of the crash showed the twisted and charred remains of the vehicle.

Shocking video footage from the scene showed the cricketer covered in blood and being helped by locals as the car lay ablaze in the middle of the road.

Pant, 25, is one of the star players of Indian Premier League team Delhi Capitals and was part of the India test squad that sealed a 2-0 series victory over Bangladesh earlier this month.

Pant’s car hit the road divider and burst into flames 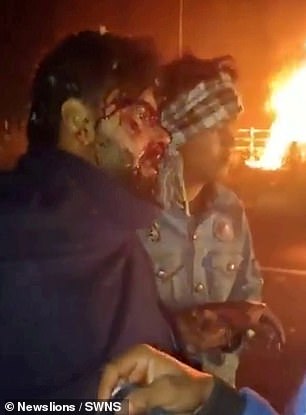 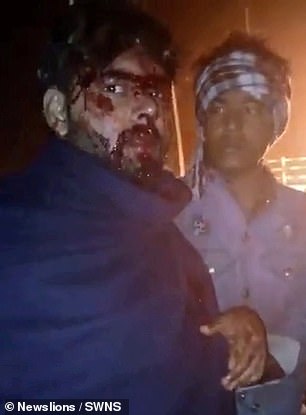 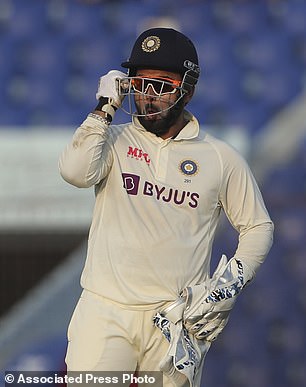 India’s Rishabh Pant adjusts his sunglasses during the day four of the first Test cricket match between Bangladesh and India in Chattogram, Bangladesh, Saturday, Dec. 17, 2022

Pant had multiple injuries following the crash and was first rushed to a nearby hospital before being shifted to a more advanced facility.

The exact extent of his injuries remains unknown but media reports said he had sustained head, limb and back injuries in the crash as well as several burns.

Cricket website ESPNCricinfo reported that the 25-year-old suffered lacerative wounds on his forehead above his left eye and also a ligament tear in his knee.

‘Rishabh is stable and undergoing scans,’ Board of Control for Cricket in India (BCCI) secretary Jay Shah tweeted.

‘We are closely monitoring his progress and will provide him with all the necessary support.’

A Delhi Capitals statement published on social media said the crash occurred between Manglaur and Narsan in Haridwar district. 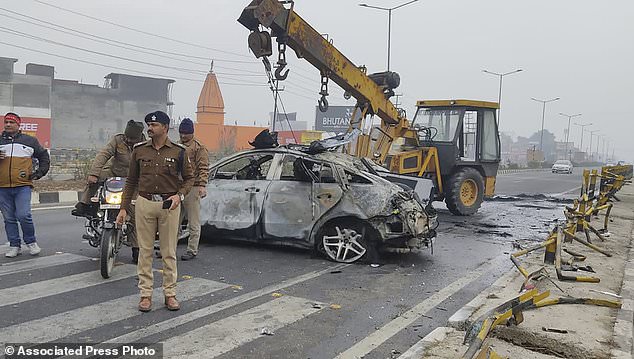 Policemen investigate the scene of a car accident near Roorkee, in the northern Indian state of Uttarakhand, Friday, Dec. 30, 2022. Indian cricketer Rishabh Pant, 25, was driving the car that overturned and caught fire after hitting a road divider

The charred remains of Pant’s car are pictured

‘He has now been shifted to a hospital in Dehradun after receiving primary treatment in a hospital in Roorkee,’ the team said on Twitter.

Hospital authorities were not immediately available to give an update on Pant’s condition.

Uttarakhand Director General of Police Ashok Kumar said: ‘Pant had told the local police that he lost control on his car after he dozed off for a couple of seconds. The police is investigating the case.’

Kumar added that Pant was saved by local villagers who witnessed the accident and dragged him free of the vehicle.

Pant was part of the India test squad that sealed a 2-0 series victory over Bangladesh this month.

But the crash means he is unlikely to be named in India’s Twenty20 and ODI squads for matches against Sri Lanka next month. 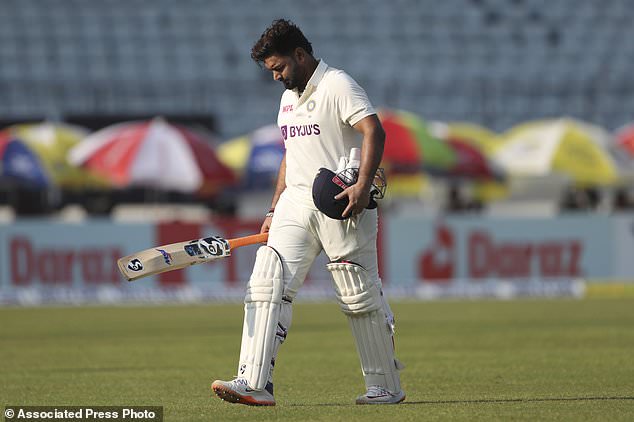 India’s Rishabh Pant reacts as he walks off the field after losing his wicket during the second day of the second cricket test match between Bangladesh and India, in Dhaka, Bangladesh, Friday, Dec. 23, 202 Pant has scored 2,271 runs in 33 tests. He has also represented his country in 30 one-day internationals and 66 Twenty20 matches.

‘Praying for Rishabh Pant. Thankfully he is out of danger,’ Laxman tweeted.

‘Hope you’re on the mend and back on your feet soon,’ tweeted the former Australia captain.