A father whose body has been severely ravaged by thousands of tumours is hoping a miracle will stop the perpetual growth and finally give him a clear face.

Surinder Sharma, 46, from India, started growing benign lumps on his face and body at the age of 20.

The undiagnosed condition, which is believed to be neurofibromatosis, was passed on to Mr Sharma from his father and causes people to be scared or mock him.

The father-of-four said: ‘The tumours are only growing with my age. These tumours have ruined my life. People laugh at me, children are scared of me. I have no social life.

‘I do not have money but I hope that [the] government helps. Medicine is advancing and I have [a] firm belief in God and doctors that some day I can be cured from this disease that has ruined my life.’ 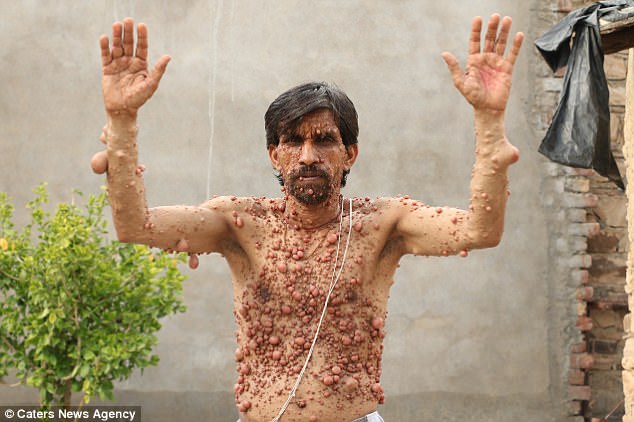 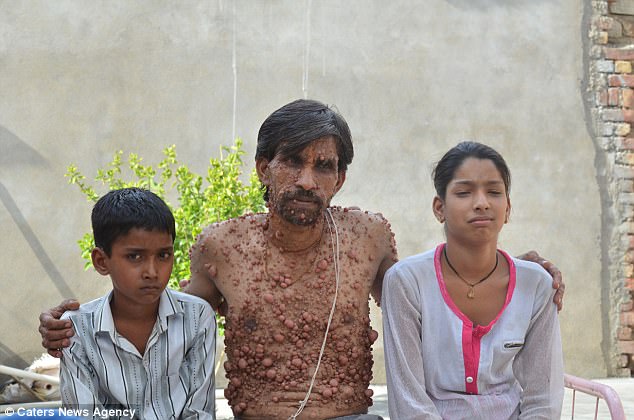 Mr Sharma, 46, grew lumps on his face and body at 20 (pictured with two of his children)

Neurofibromatosis is a genetic condition that causes tumours to grow along nerves.

Symptoms and severity vary but it typically causes coffee-coloured patches and non-cancerous lumps on or under the skin.

As well as causing benign tumours, it can also lead to gradual hearing loss, tinnitus and poor balance.

Both types are often associated with learning difficulties.

There is no cure, but surgery can remove the bumps.

Mr Sharma, who earns the equivalent of £100 a month in the grocery store he runs, has visited several local doctors over the years but is told he must travel to big cities, such as Delhi, for treatment.

Unable to afford such therapy, and faced with the responsibility of feeding four children, Mr Sharma has abandoned any hope of paying for his treatment.

He said: ‘I have spent thousands of rupees on consultations but none of the doctors here could tell me what I am suffering from.

‘Going to a big city would mean a lot of money but I cannot afford the travel or stay and doctor’s fees.

‘I do not have money but I hope that [the] government helps. Medicine is advancing and I have [a] firm belief in God and doctors that some day I can be cured from this disease that has ruined my life.’ 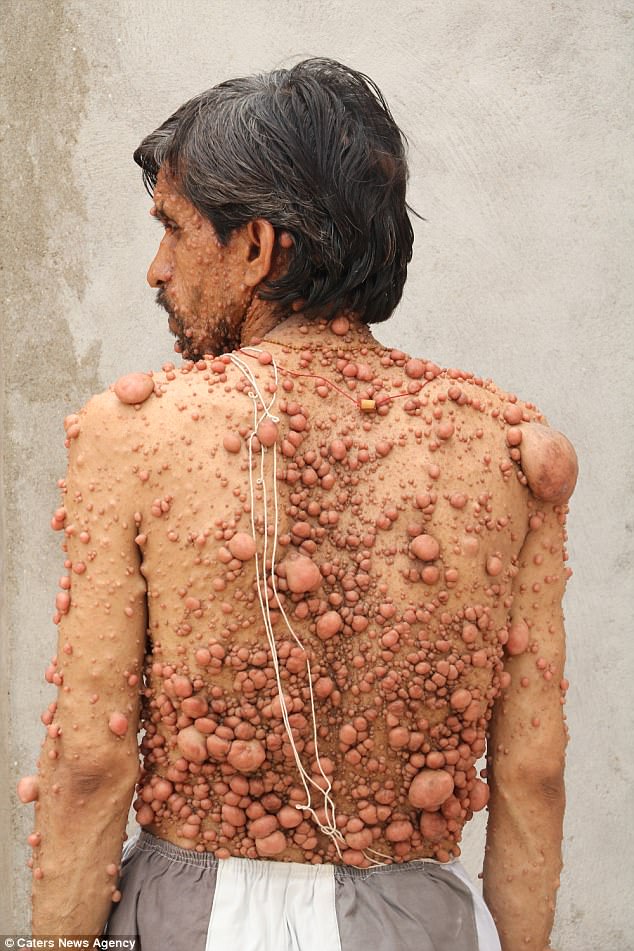 The condition, which is believed to be neurofibromatosis, was passed on to him from his father 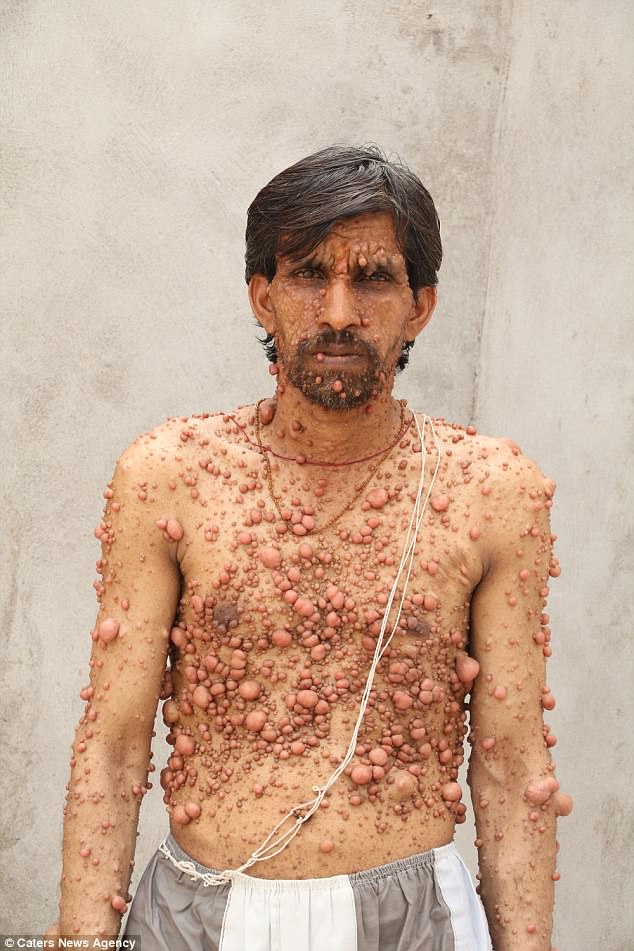 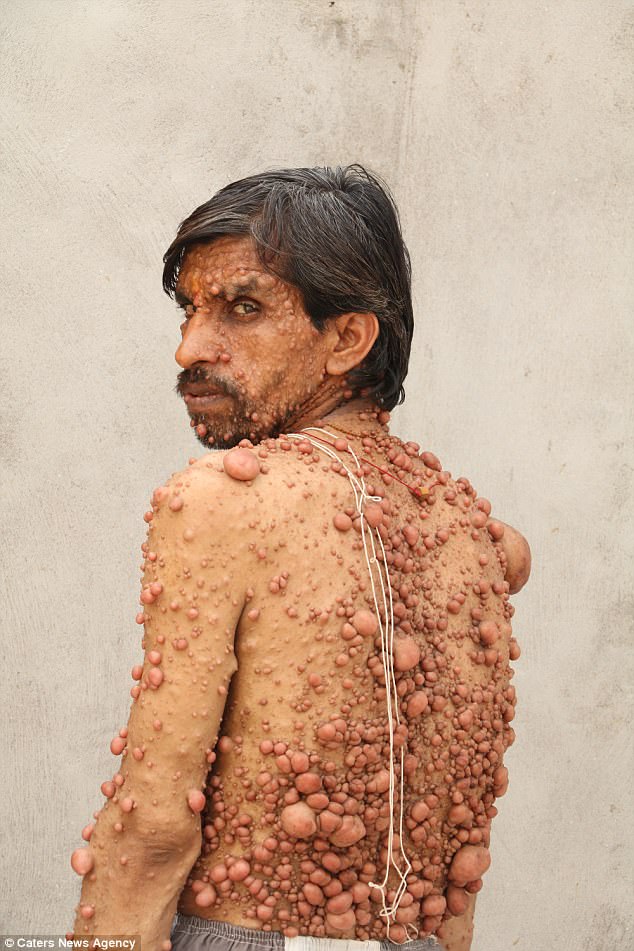 Earning just £100 a month, Mr Sharma hopes the government will help or God will cure him

‘I feel very low about myself’

Although Mr Sharma is not in any pain, he describes the discomfort as unbearable.

He said: ‘There is a weird sensation in the lump and when I sweat I feel burned and itchy. I try to keep as clean as possible.’

Other than the physical effect the lumps have had on Mr Sharma’s life, they have also severely knocked his confidence.

He said: ‘I feel very low about myself. I run this store but hardly [any] people come to buy from the shop.

‘I feel uncomfortable in moving freely in [the] market because people stare at me and children get scared.

‘My family loves me but I feel inferior in front of others. The society demands a person to look in a certain manner and my appearance does not fit that criteria.

‘My kids are very supportive but they are growing and a day might come when they feel bad about me.’ 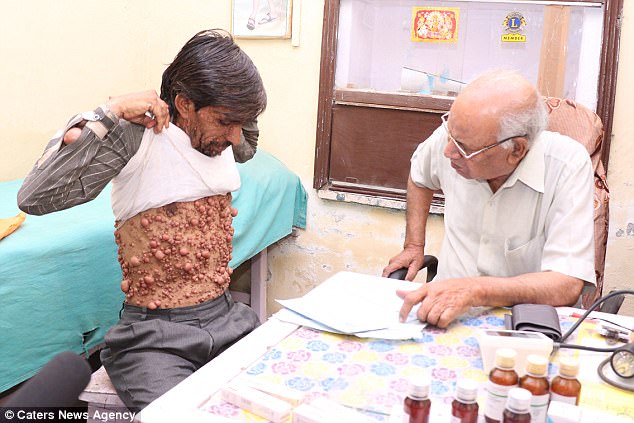 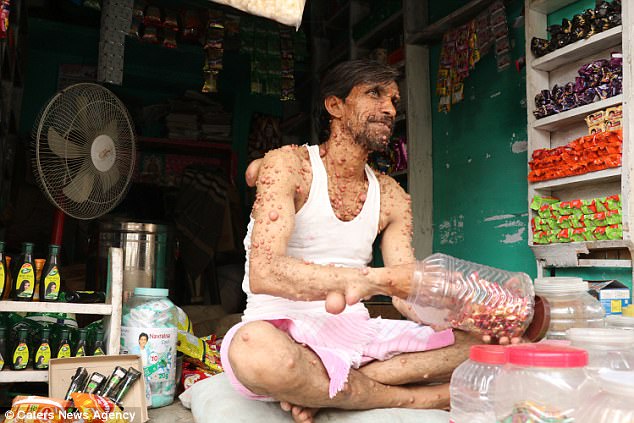 Mr Sharma says his children are supportive, but he worries they will be ashamed as they age 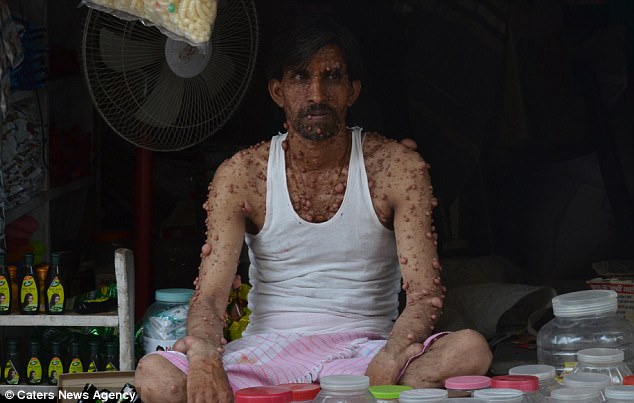 Although he inherited the condition from his father, Mr Sharma says his is much more severe

‘The lumps spread over my entire body’

Mr Sharma was born healthy, however, when he turned 20, lumps started to appear on his face. As his father also had these growths, Mr Sharma ignored them at first.

Unfortunately, the lumps became progressively worse and within a few years engulfed his body.

Mr Sharma said: ‘I was a handsome man in my youth but just a few months after my marriage, I noticed a lump on my face. Within [a] few days there was a cluster of them; they were growing really fast.

‘Because I had seen my father with these lumps on his face I thought I too would be fine just like him. But as time went by, the lumps started growing bigger and bigger and eventually spread [over] my entire body.

‘It was really severe and worse than my father.’

Dr Suraj Sahay Saxena, a GP who also advised Mr Sharma’s father, said: ‘It looks to me a case of neurofibromatosis. It is a very uncomfortable condition to live with but sadly I cannot be of any help to him.

‘He had come to me two months [ago] and I had advised him to go to a skin specialist as they will be able to diagnose the condition.

‘Years ago his father had also come to me for help but his condition was not as bad as Surinder’s.

‘I believe there can be a treatment for his condition but it is not possible here as we do not have the resources for the examinations. I have suggested him to see doctors in Delhi.’