An Indian man can finally eat for the first time in three years after accidentally swallowing his dentures.

Deepak Nandi, 46, from Calcutta, was forced to eat through a tube after his false teeth damaged his food pipe and left him unable to swallow.

It also caused him to drool, which forced the shy stationary shop owner to ‘live a recluse life’.

After keeping the incident to himself for the first three months, Mr Nandi’s family soon became suspicious when he refused to eat in front of them.

Although he underwent surgery to remove the dentures two-and-a-half years ago, the lasting damage meant he still could not eat.

But earlier this year, Mr Nandi went under the knife twice more to widen his gullet and can now finally enjoy a hearty meal.

Deepak Nandi can finally eat for the first time in three years after accidentally swallowing his dentures. Image shows his surgery scars after the stationery shop owner went under the knife twice earlier this year to open up his food pipe wide enough to be able to enjoy a meal 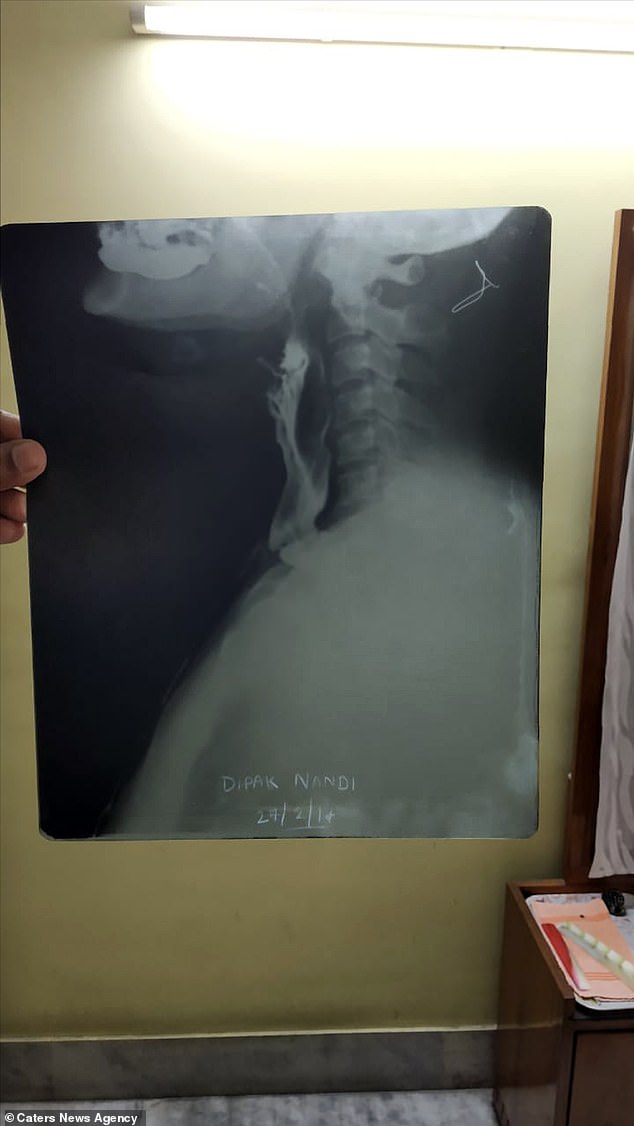 Although Mr Nandi had his first surgery two-and-a-half years ago, the damage to his food pipe was too severe to reverse what his dentures did. The X-ray, taken before his first operation, shows the fistual – abnormal hollow space – in his gullet, which prevented him from swallowing

Mr Nandi, who is unmarried and lives with his older brother and mother, is recovering from his most recent surgery.

His brother, Narayan Chandra Nandi, said: ‘In 2015 he came home saying he had some difficulty in his throat.

‘He complained of pain in [his] throat and refused to eat. He wouldn’t tell us what was wrong until we forced him to speak.

‘He later said that he had swallowed two teeth while eating food. He had two dentures on [his] lower jaw and he accidentally swallowed them.

‘I took him to [an] ENT specialist immediately but, after tests, the doctors said the dentures had stuck in a complicated position and recommended us to seek help from specialists in government hospitals.’

Mr Nandi was taken to the Radha Gobinda Kar Medical College and Hospital.

After performing an endoscopy and an X-ray of Mr Nandi’s gullet, doctors revealed he was suffering from a fistula.

This is an abnormal connection that occurs between two hollow spaces, such as blood vessels. It can be caused by injury, surgery or an infection.

To close the fistula, the medics performed reconstructive surgery. 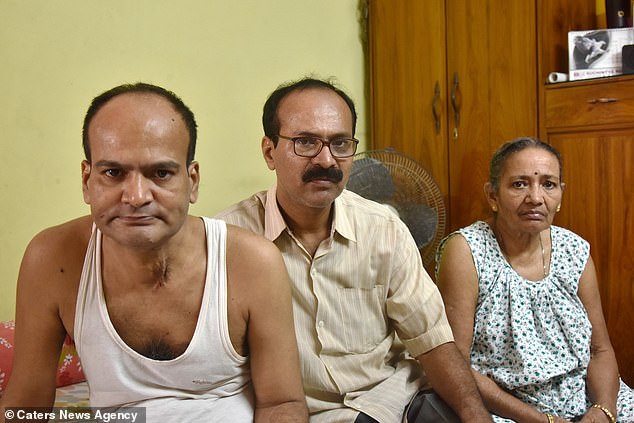 After hiding what had happened for the first few months, his family became suspicious when he refused to eat in front of him. They later forced him to be honest about what had happened. Mr Nandi lives with his mother and older brother Narayan Chandra Nandi, both pictured 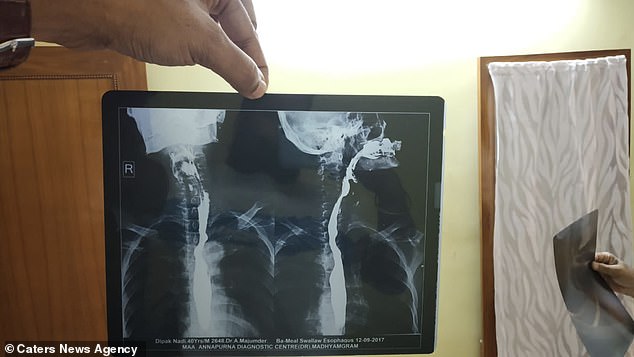 ‘But after the surgery, we learnt the dentures had caused severe damage to his oesophagus and there were holes in some folds,’ Narayan said.

‘This meant whatever he was eating was leaking from it. He could not even talk properly.

‘As he tried to speak loudly, there would be an outpouring of saliva.

‘He was so embarrassed of his condition that he stopped talking and going out. Even he closed his stationary shop.

‘He was living a reclusive life.’

After an additional two procedures, Mr Nandi’s food pipe was wide enough for his feeding tube to be removed.

‘Thanks to the doctors and the successful surgeries, my brother can orally intake food and is also back to his stationary shop,’ Narayan said.