A 12-year-old schoolgirl killed herself after allegedly being shouted at for staining her uniform and bench with period blood.

The young girl was on her period when her menstrual blood leaked onto her clothes and bench.

She was allegedly scolded by her teacher for making a mess. 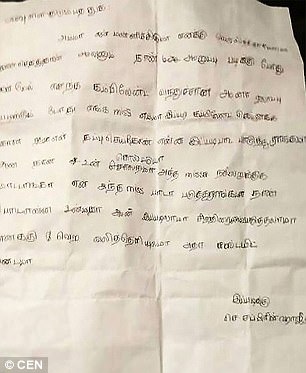 A young Indian girl, left, took her own life after her teacher shouted at her for staining her clothes with menstrual blood. The 12-year-old student left a note, right,

She took her own life near a neighbour’s house.

Her shocked parents said they did not know she was suicidal and only found out about her reasons in a letter she left.

The note reportedly read: ‘I don’t know what to say. Until now you didn’t hear any complaint about me but why did the teacher complain about me like this?’

According to reports, the teacher allegedly shouted at the girl in front of her classmates.

The incident sparked protests from the parents of pupils who were angry over the girl’s death.

Police managed to break up the crowd and promised to take action.

An investigation has been launched, a senior police spokesperson confirmed.

They added: ‘Right now we are hearing different versions. Only after the completion of probe will we have clarity.’

It is not known whether the unnamed teacher in question faces police action.