A teenager was gang-raped by six men who tied her father to a tree and forced him to watch in the latest sickening sex attack in India.

The men knocked on the 19-year-old victim’s door in her village in Bihar’s Kishanganj district asking for water before dragging her outside, reports The Times of India.

She was taken to a deserted field along with her father, who was tied up and forced to watch the assault, at around 2am.

The victim reported the incident and told officers the men had threatened her and warned her not to speak to police.

One man, named as Mohammad Kasim, has been arrested, but the five other men have fled, according to Kumar Ashish, the Kishanganj superintendent of police.

He added: ‘According to locals, the six accused often used to harass girls and women at Patthar Ghatti and neighbouring villages.

‘However, the villagers never complained against them. Faiz, one of the six accused, has criminal antecedents.’

The young woman was taken for medical examination at Kishanganj Sadar hospital after the attack, but her clothes could not used for forensic evidence as they were washed.

Last month, an engineering student was subjected to a two-day gang rape before being left for dead in a wood in the eastern state of Odisha.

The 20-year-old woman was left in critical condition following the attack which started when a man claiming to be friends with her brother approached her at a station as she waited for a train.

The man wrongly told her that, due to repair work on the line, trains were not running to her destination and suggested she travel with him instead. 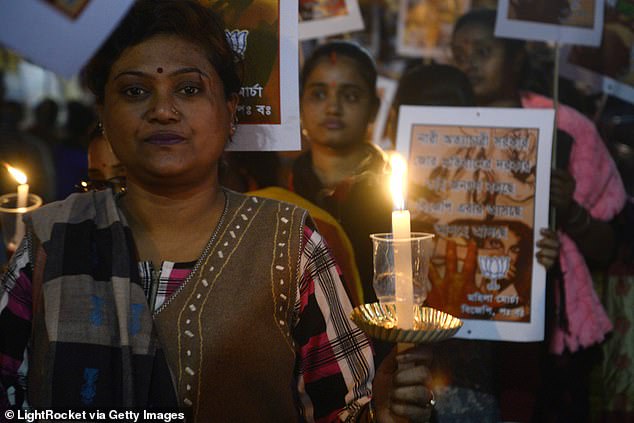