An indigenous town councillor has slammed as selfish Black Lives Matter activists for protesting in the middle of the coronavirus pandemic.

Jacinta Price posted on Facebook an image of a dying elderly woman, being treated by a nurse in personal protective equipment, to highlight the irresponsibility of mass gatherings.

‘When you are not one of our elders wanting to die in isolation you do your part so that the vulnerable don’t have to face this heartbreak,’ she said on Wednesday.

‘This is why you don’t protest in the middle of a pandemic and this is why you adhere to regulations. Sometimes it’s not about you.’

She posted on Facebook an image of a dying elderly woman, being treated by a nurse in personal protective equipment, to highlight the irresponsibility of mass gatherings 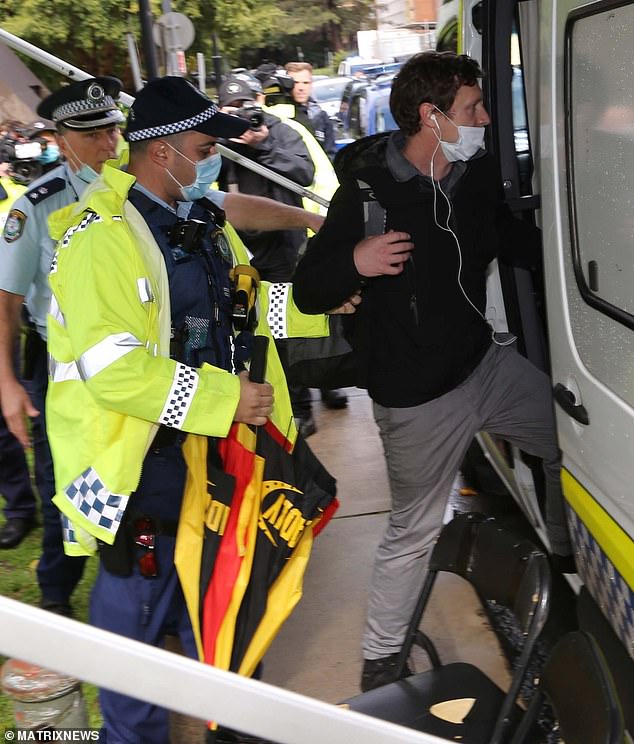 The police swooped in to stop the demonstration after the New South Wales Court of Appeal rejected organiser Paddy Gibson’s illegal gathering. He is pictured being put into a van on the edge of Sydney’s The Domain

The police swooped in to stop the demonstration after the New South Wales Court of Appeal rejected organiser Paddy Gibson’s illegal gathering.

He was filmed being arrested at The Domain and dragged into a waiting police van.

‘Tell the people to cancel the rally, leave The Domain, don’t come near me.’

Each were issued with $1,000 fines for breaching public health orders, before being issued move-on directions.

A third woman, aged 25, was arrested and issued a criminal infringement notice for offensive language.

The protest was due to start at noon Tuesday, despite being declared illegal by the NSW Supreme Court on Sunday. 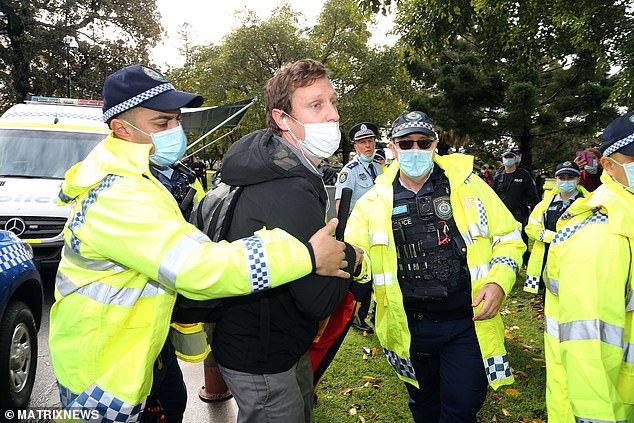 Up to 5,000 protesters had registered on Facebook to attend the rally but police shut it down shortly before the demonstration was due to begin.

The daughter of former Northern Territory CLP minister Bess Price has also questioned the focus on black deaths in custody, pointing out indigenous inmates were no more likely to die in custody than white prisoners.

The outspoken conservative, who has indigenous Warlpiri heritage, has criticised the Black Lives Matter movement in Australia for importing an American slogan, devised by Marxists capitalising on the death in May of former African-American security guard George Floyd, as he was arrested in Minneapolis.