Indonesia quake-tsunami death toll rises to 1,407, as survivors are forced to scavenge

Hungry survivors of an earthquake and tsunami in Indonesia said on Wednesday they were scavenging for food in farms as President Joko Widodo made a second visit to the area to ramp up aid efforts five days after disaster struck.

The official death toll from the 7.5 magnitude quake that hit the west coast of Sulawesi island last Friday has today risen to 1,407, with many killed by tsunami waves it triggered.

But officials fear the toll could soar, as most of the confirmed dead have come from Palu, a small city 930 miles northeast of Jakarta, and losses in remote areas remain unknown.

Devastation: At least 1,407 people have died as a result of a series of powerful earthquakes that hit central Sulawesi and triggered a tsunami, destroying areas such as this one in Donggala 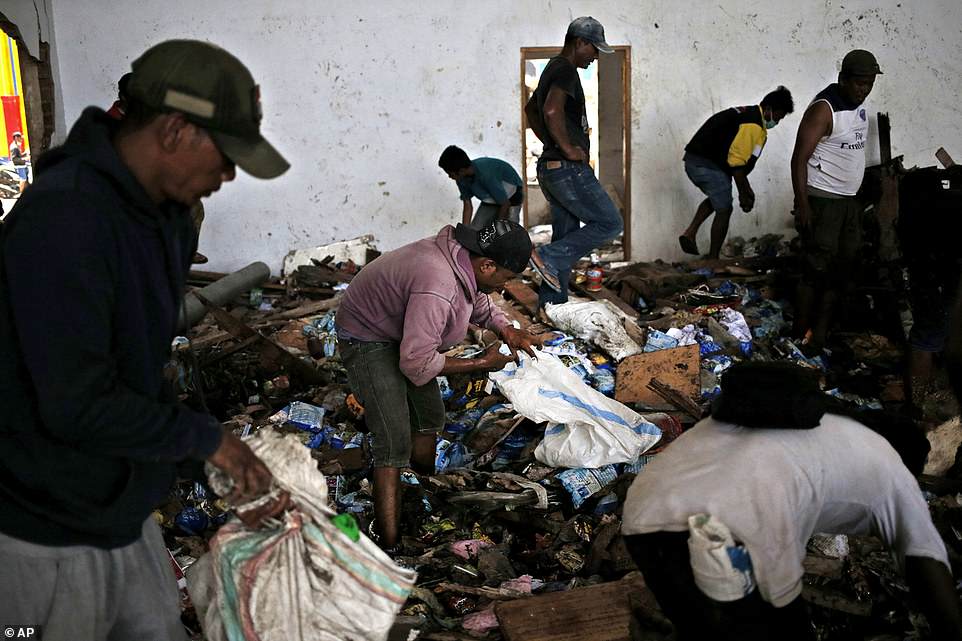 ‘Zombie towns’: Clambering over the reeking pile of sodden food or staking out a patch of territory,  people have come to this warehouse in Palu to fill bags with small cartons of milk, soft drinks, rice, sweets and anything else edible they can find 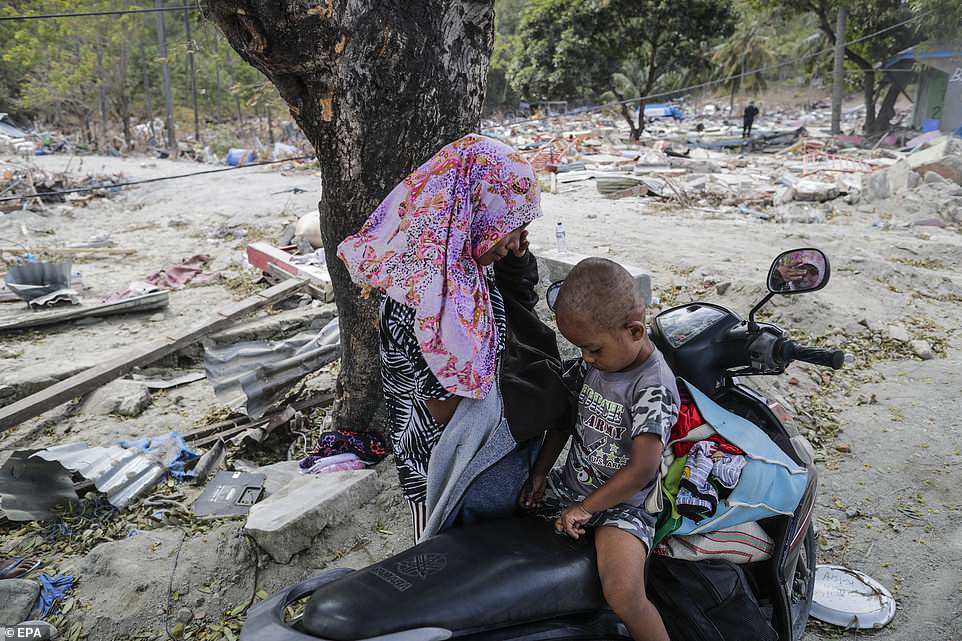 Tragedy: Mirna, 26, and her four-year-old son Rahman rests under a tree at a tsunami devastated area in Donggala

Communications are down across the island, and bridges and roads have been destroyed or blocked by landslides.

National disaster mitigation agency spokesman Sutopo Purwo Nugroho said most of the aid effort had been concentrated in Palu, where electricity supply has yet to be restored.

But rescue workers have begun to reach more remote areas in a disaster zone that encompasses 1.4 million people.

Johnny Lim, a restaurant owner reached by telephone in Donggala town, said he was surviving on coconuts. 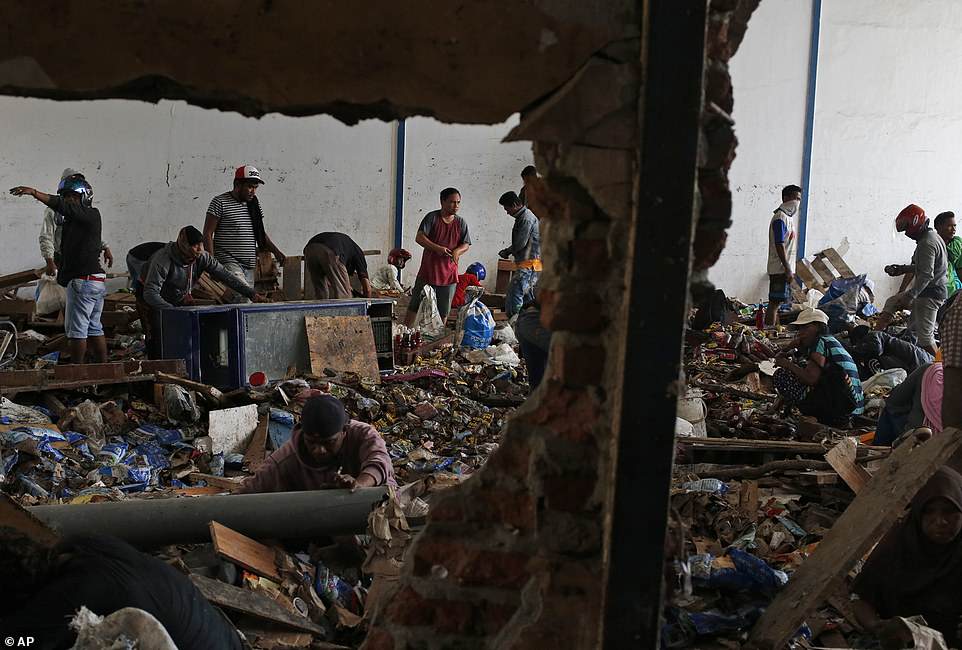 Men scavenge for food inside a destroyed warehouse following an earthquake and tsunami in Palu, Central Sulawesi 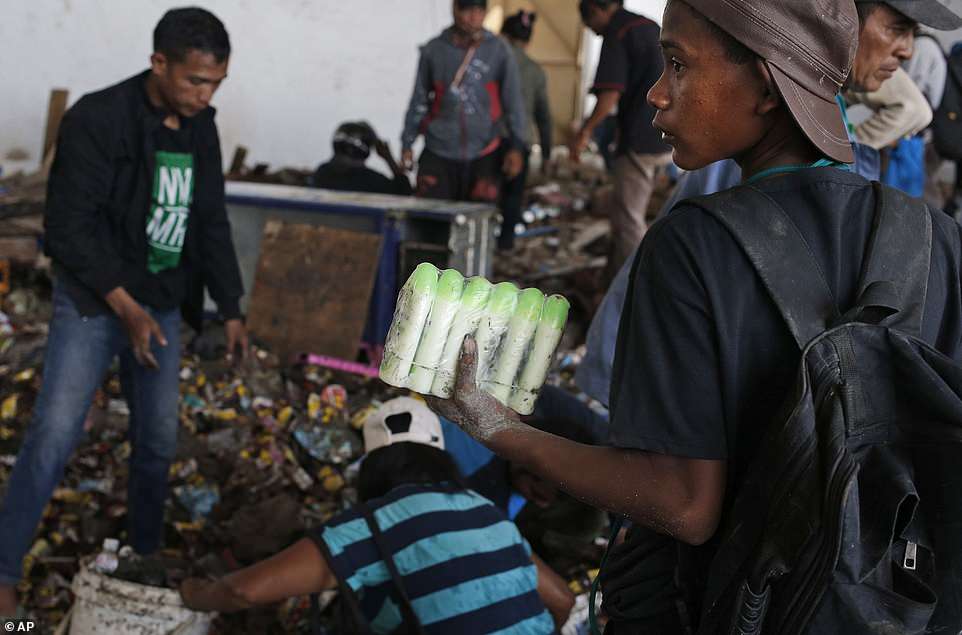 Grab what you can: A young man holds bottles of what appears to be body lotion which he has found in the rubble 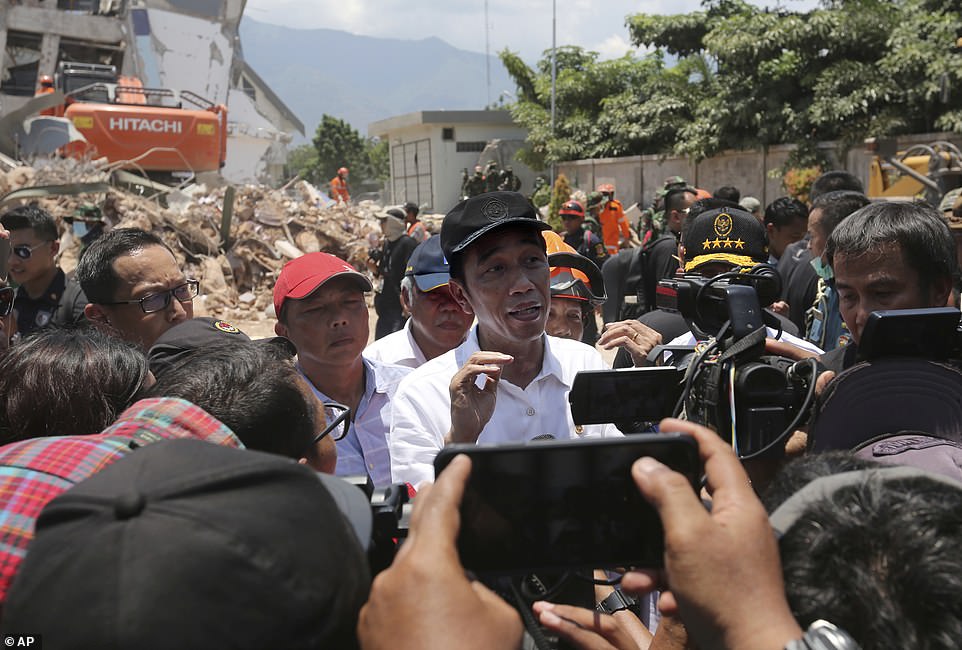 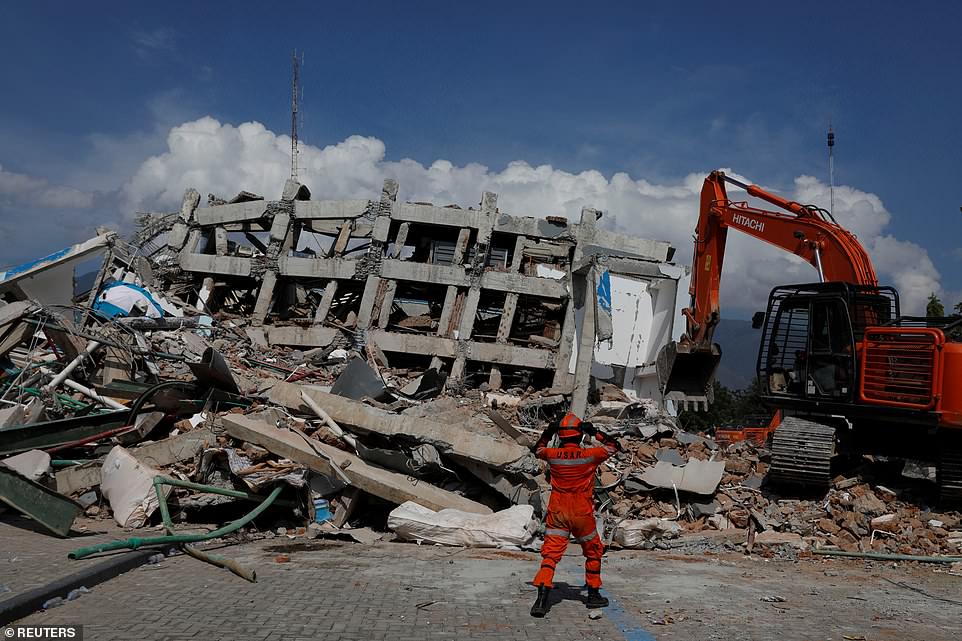 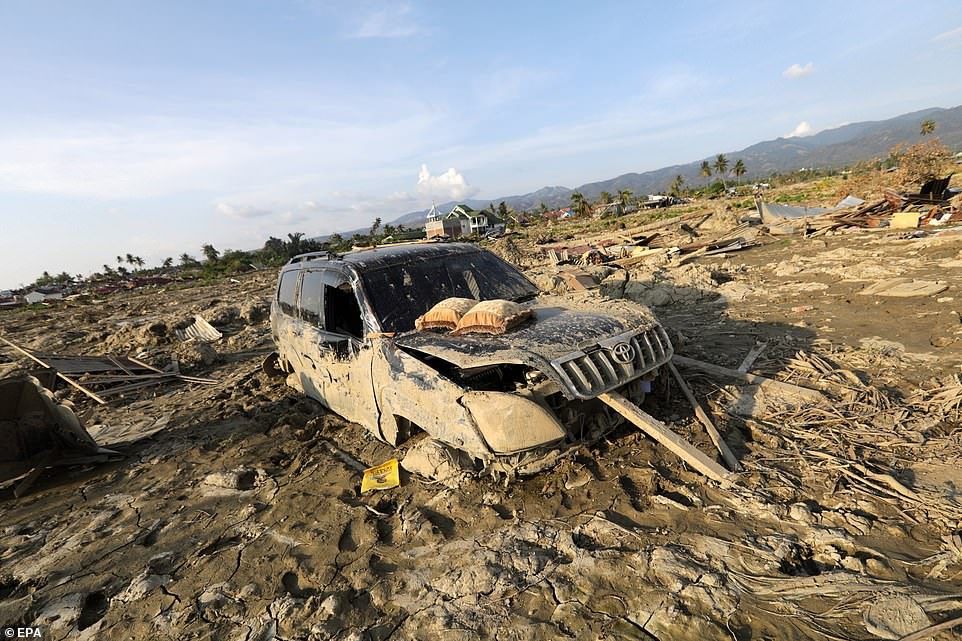 Nothing but mud: A car is stranded in the mud at Petobo village in Palu, Central Sulawesi 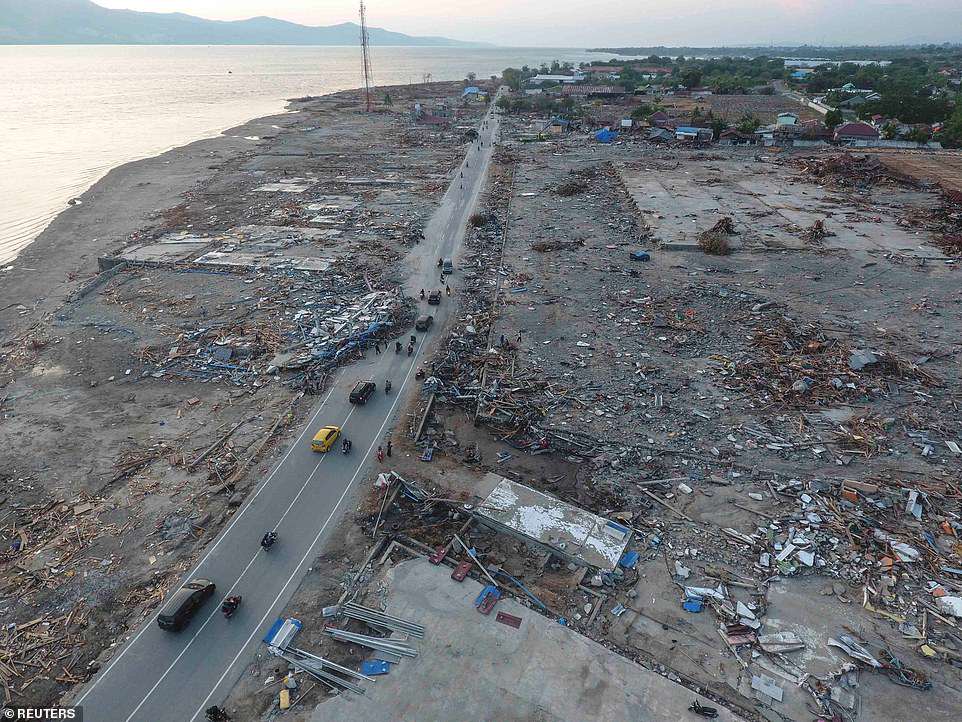 Nothing left: An aerial view of an area damaged by an earthquake and tsunami at Tondo district in Palu

In another part of Donggala district, which has a population of 300,000 people, Ahmad Derajat, said survivors were scavenging for food in fields and orchards.

‘What we’re relying on right now is food from farms and sharing whatever we find like sweet potatoes or bananas,’ said Derajat whose house was swept away by the tsunami leaving a jumble of furniture, collapsed tin roofs and wooden beams.

‘Why aren’t they dropping aid by helicopter?’ he asked.

Aid worker Lian Gogali described a perilous situation in Donggala, which includes a string of cut-off, small towns along a coast road north of Palu close to the quake’s epicentre.

‘Everyone is desperate for food and water. There’s no food, water, or gasoline. The government is missing,’ Gogali said, adding that her aid group had only been able to send in a trickle of rations by motorbike. 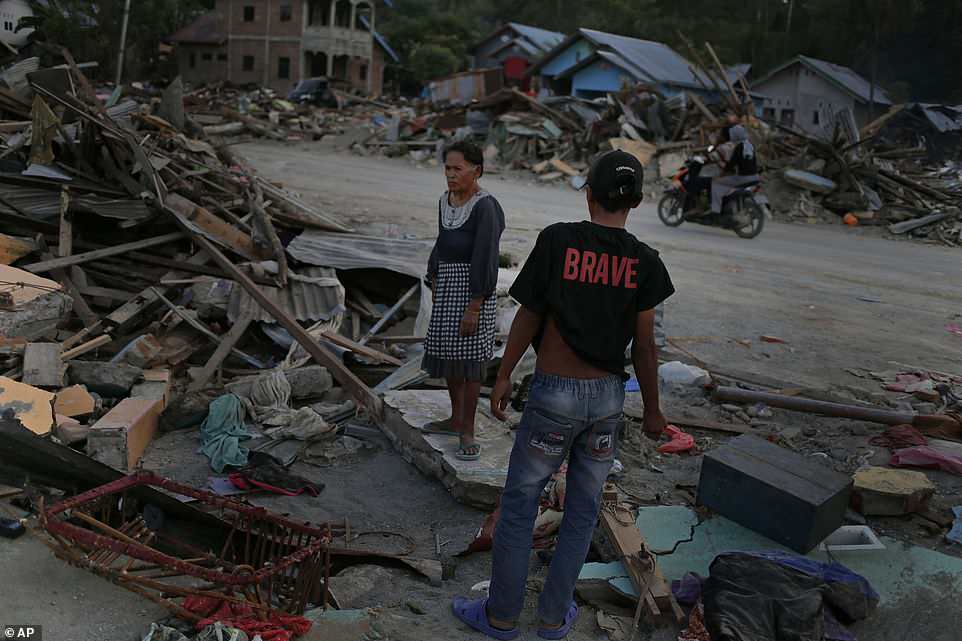 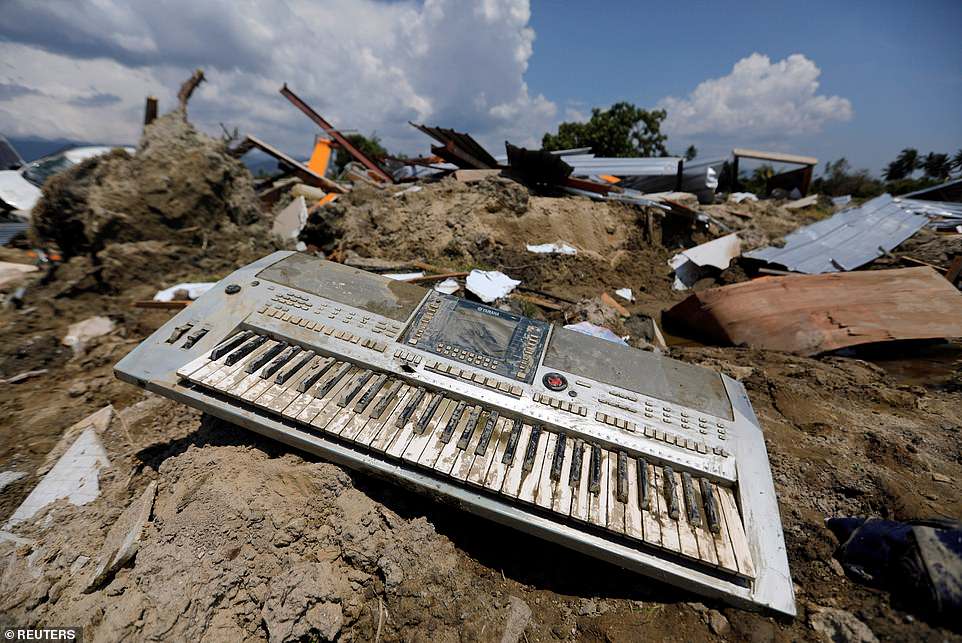 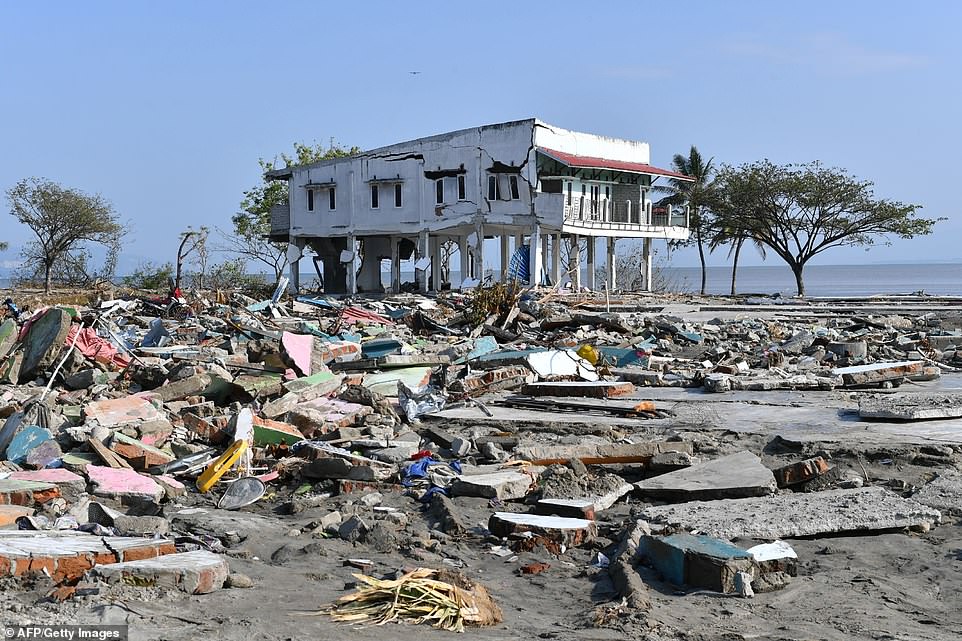 Last one standing: A building stands amid the debris of a flattened fishing village in Lere subdistrict in Palu 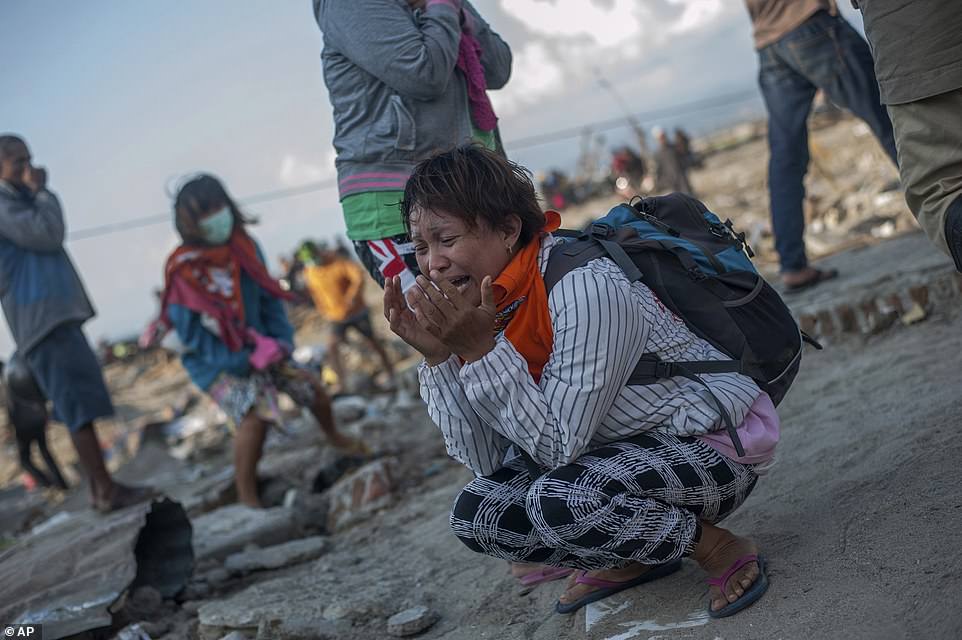 Heartbreaking: A woman cries out after rescuers recovered several bodies of victims in a village near Palu

Underlining a growing sense of urgency, President Widodo made his second visit to the disaster zone, putting on an orange hard hat to talk to rescue workers at a collapsed hotel in Palu.

‘What I’ve observed after returning now is heavy equipment has arrived, logistics have started to arrive although it’s not at maximum yet, fuel has partly arrived,’ Widodo told reporters.

Earlier today, the president received a message from Queen Elizabeth II  and Prince Philip, who sent their ‘sincere condolences to all those affected by the disaster’.

The Queen said: ‘I was extremely sorry to hear about the terrible earthquake and tsunami in Sulawesi at the end of last week, particularly given these events happened so soon after the recent earthquake in Lombok.’ 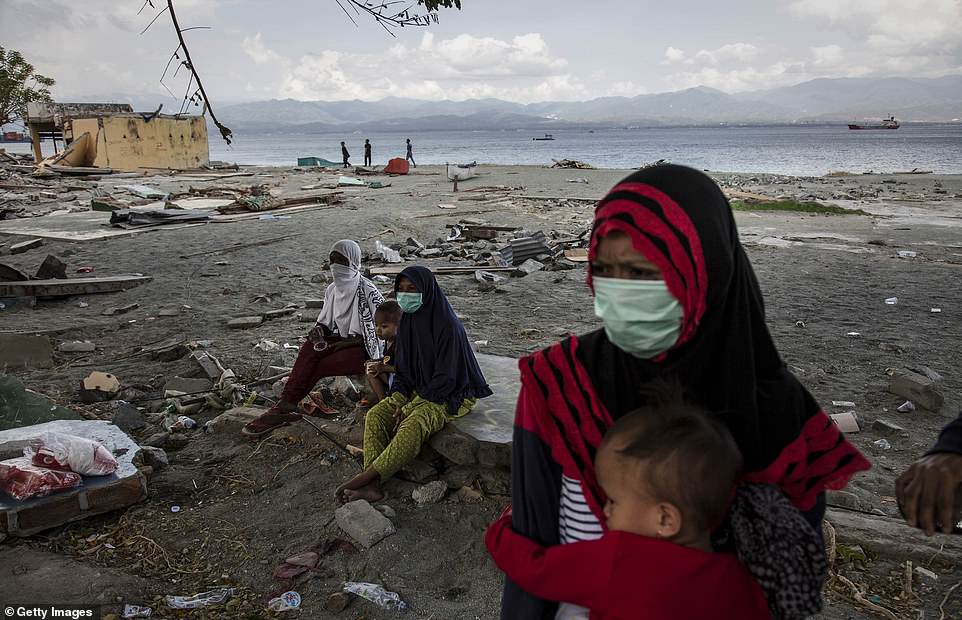 Women and children sit by the remains of their destroyed home in Donggala, Central Sulawesi, Indonesia 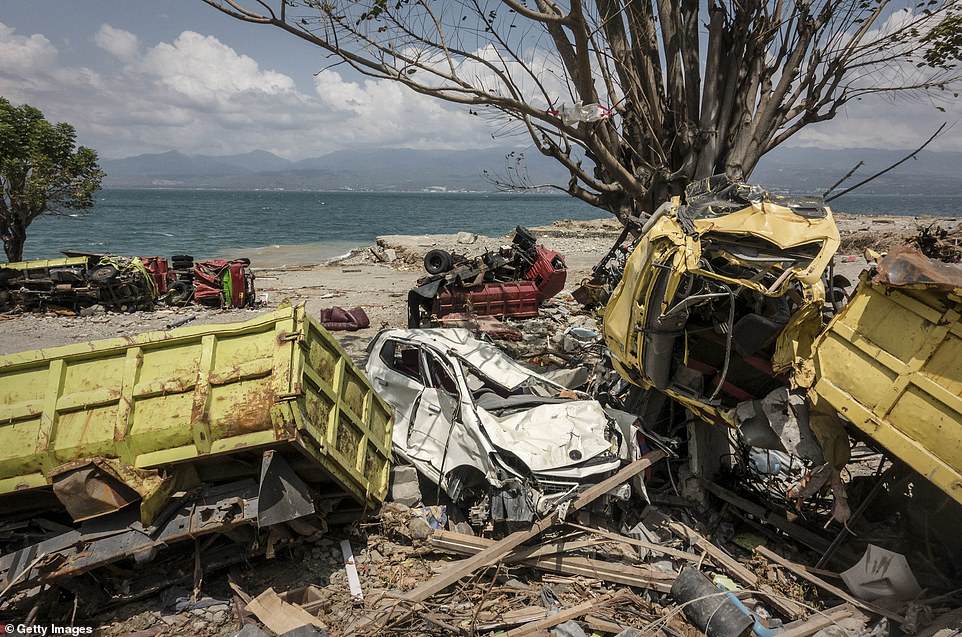 Trucks and cars line the seafront in Donggala, Central Sulawesi in the wake of last week’s disaster 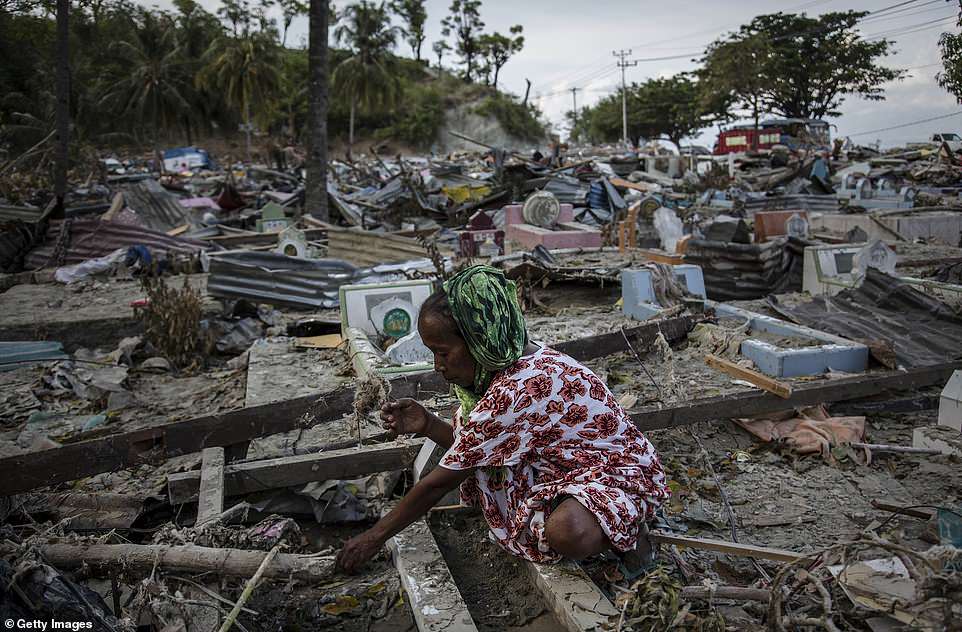 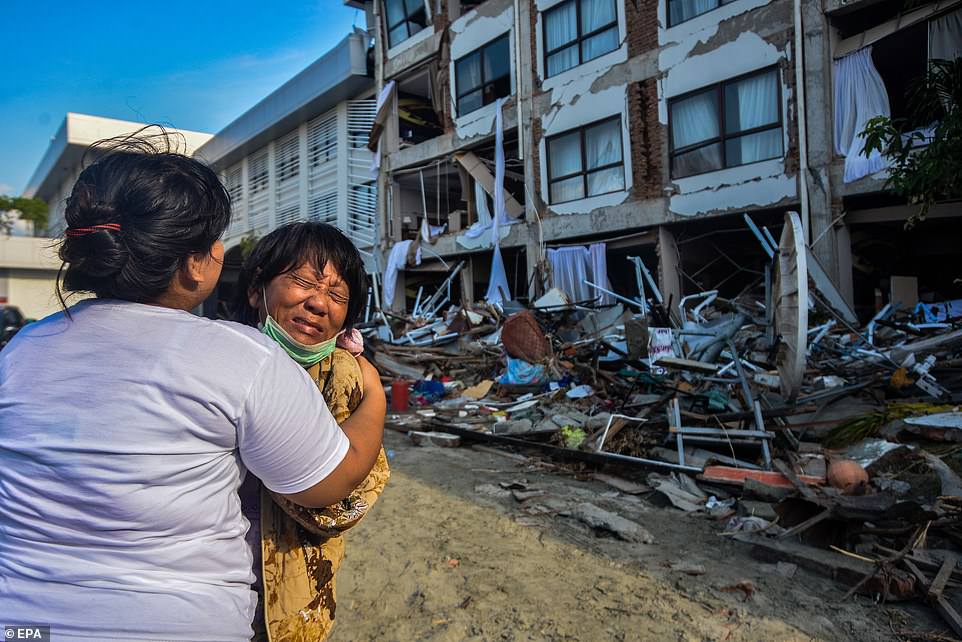 Widodo, who will seek re-election next year, called on Tuesday for reinforcements in the search for victims, saying everyone had to be found.

He repeated that on Wednesday, after inspecting what he called an ‘evacuation’ effort at the Hotel Roa Roa, where he said some 30 people lay buried in the ruins.

However, Widodo has been criticised over the rescue effort – or rather the lack thereof – by locals.

Yahdi Basma, a leader from a village south of Palu hoping to get his family on a cargo plane out, said Widodo had no idea of the extent of the suffering.

‘The president is not hearing about the remote areas, only about the tsunami and about Palu,’ he said.

‘There are hundreds of people still buried under the mud in my village … There is no aid whatsoever which is why we’re leaving.’ 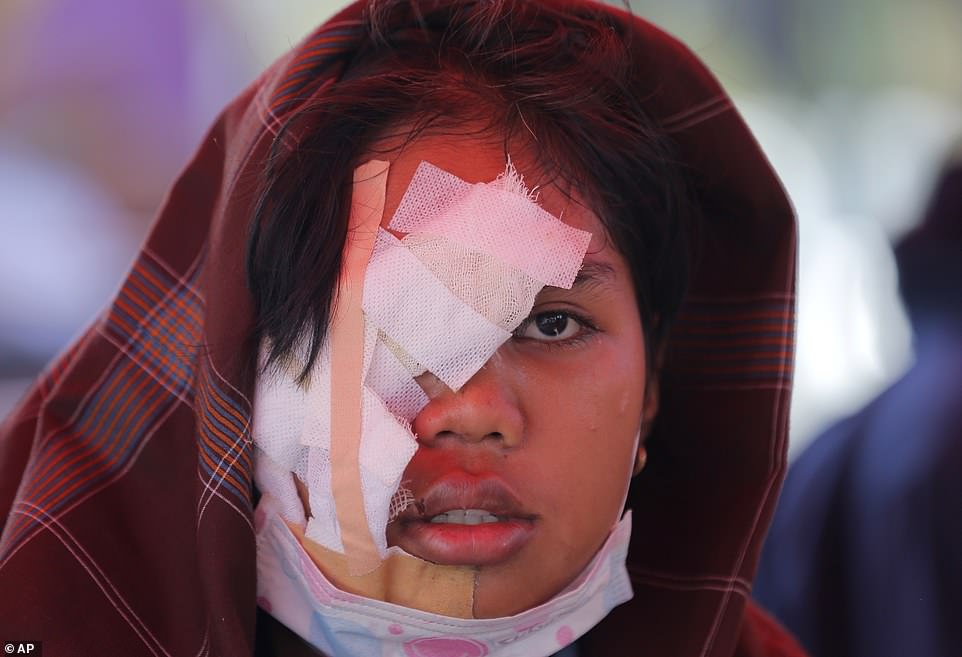 Survivor: A young woman has been heavily bandaged at a makeshift hospital in Palu 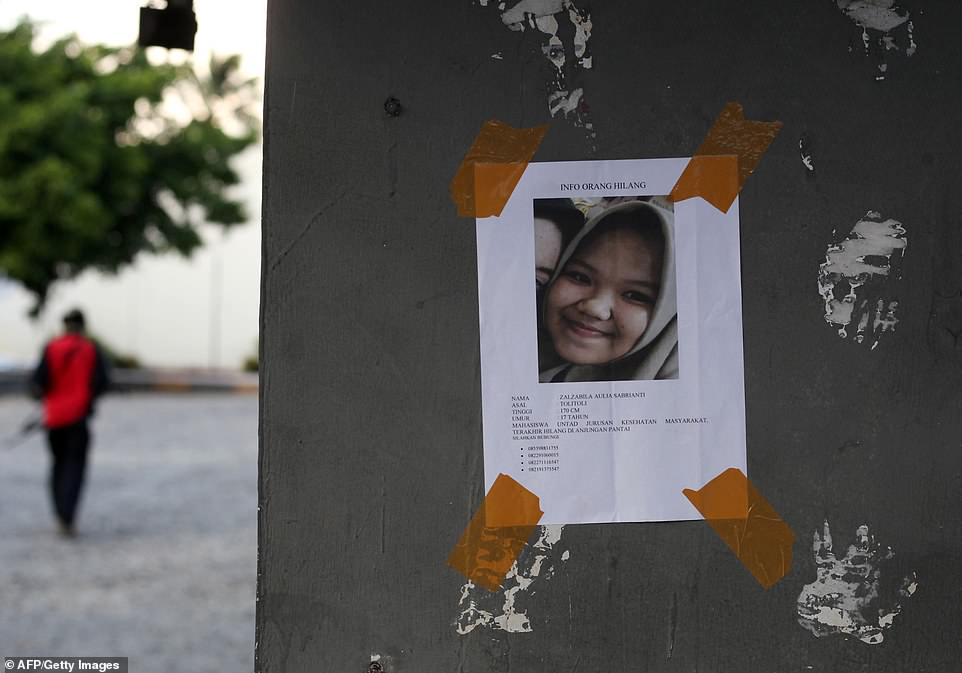 Hunt: A poster of a missing 17-year-old girl is pasted on a wall in Palu where thousands are looking for lost relatives 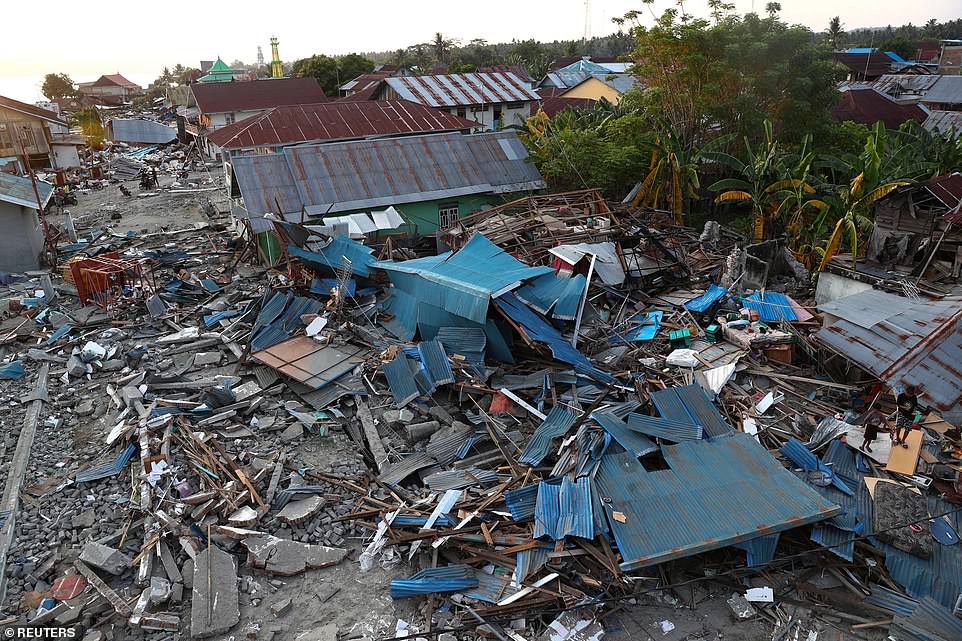 Flattened: Debris and damaged properties are seen after the earthquake and tsunami hit an area in Wani, Donggala 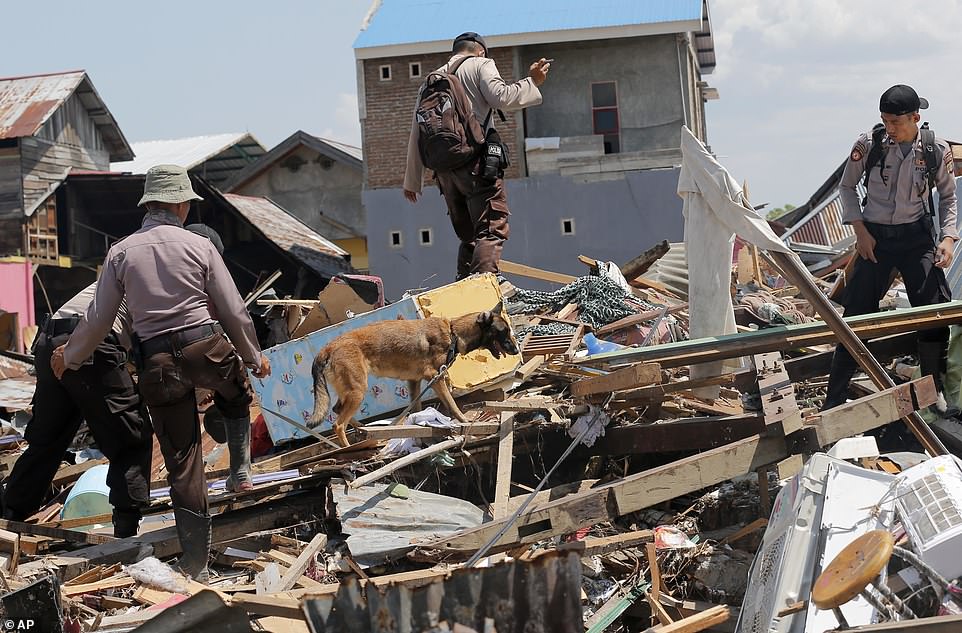 At least seven cargo planes arrived at Palu airport earlier on Wednesday carrying tonnes of aid, some bedecked in the red and white national colours and stamped with the presidential office seal declaring: ‘Assistance from the President of Republic of Indonesia’.

Yesterday, the Ministry of Defence confirmed that British military experts and a transportation aircraft would be sent to help in the relief effort.

Defence Secretary Gavin Williamson agreed to deploy an RAF A400M aircraft stationed in the Middle East and a small team of UK military experts to assist with the aid mission.

He said: ‘Britain stands united with Indonesia as they recover from this devastating tragedy.’

An RAF transport aircraft and her crew will provide vital supplies to those who are in need.

The quake brought down hotels, shopping malls and thousands of houses in Palu, while tsunami waves as high as 20 feet scoured its beachfront shortly afterwards.

About 1,700 houses in one neighbourhood were swallowed up by ground liquefaction, which happens when soil shaken by an earthquake behaves like a liquid, and hundreds of people are believed to have perished, the disaster agency said.

Indonesian Red Cross disaster responders said the village of Petobo, just south of Palu, which was home to almost 500 people, had been ‘wiped off the map’. 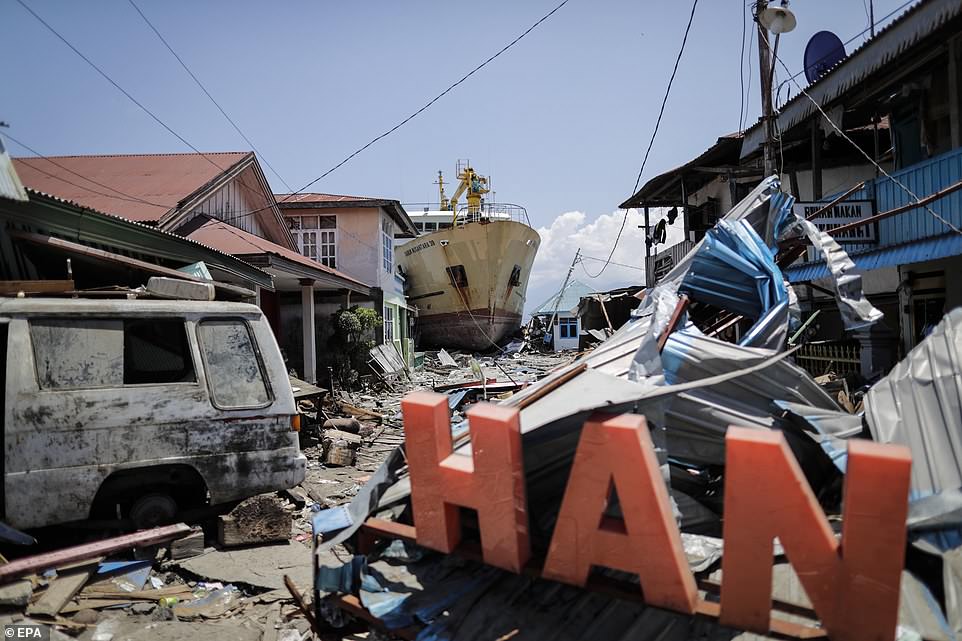 A devastrated street in Wani, Donggala, where homes have been ripped to shreds by tremors and waves and a boat can be seen looming in the background 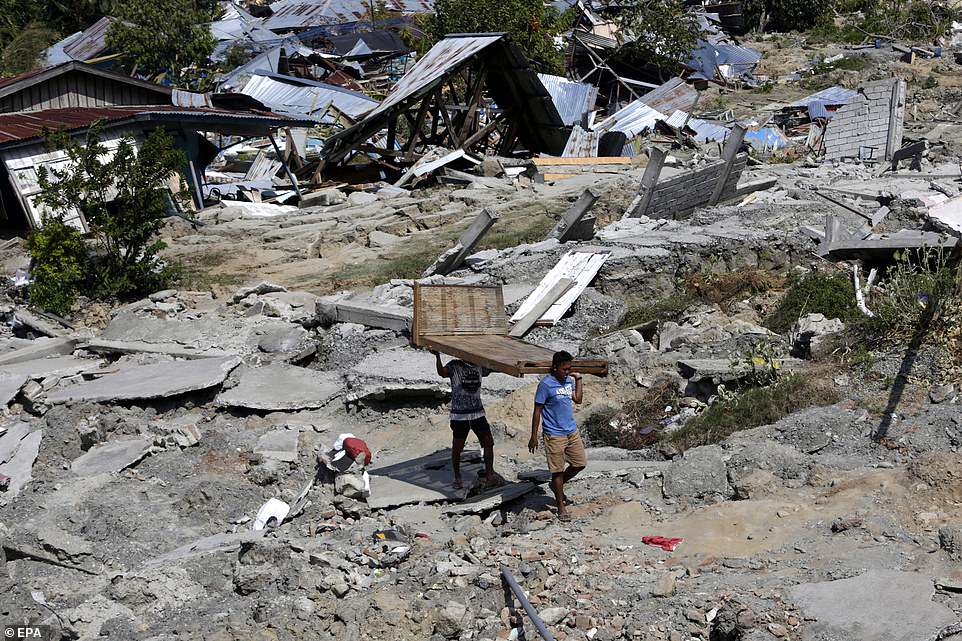 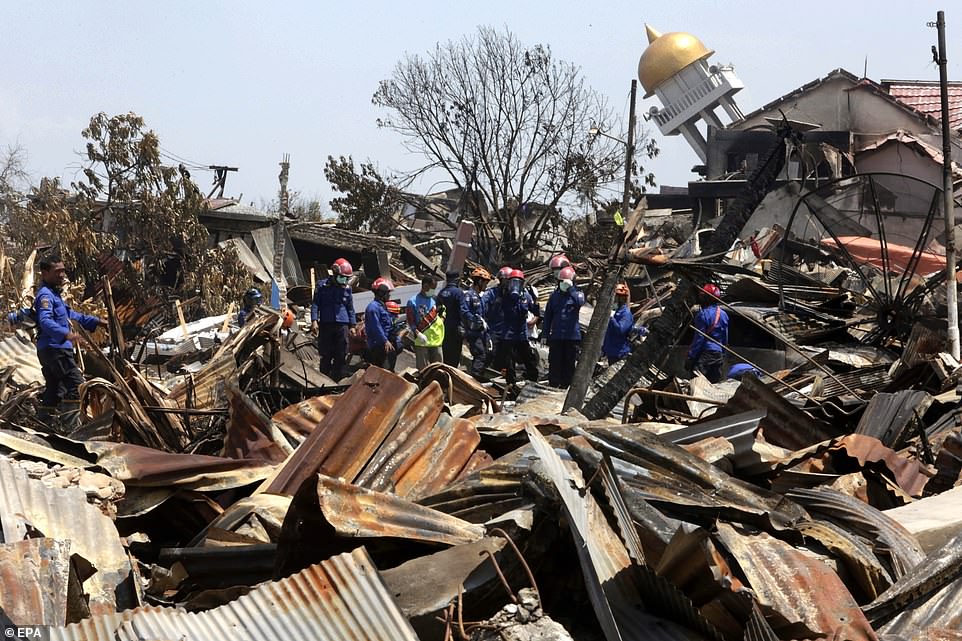 Indonesian fire fighter rescue teams search for bodies under the ruin of a house at Balaroa, a district of Palu city which was one of the worst hit by the tsunami 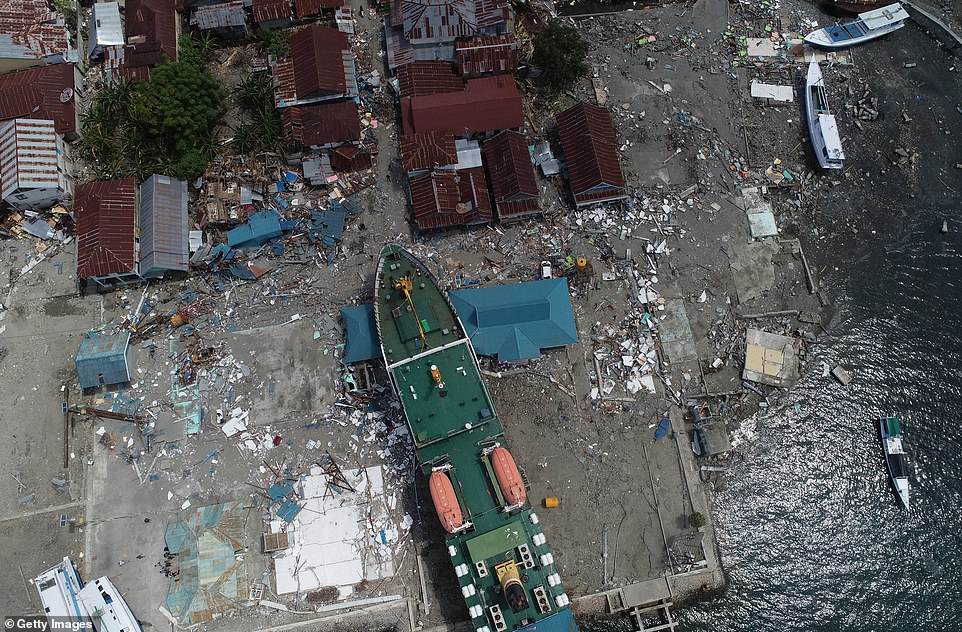 ‘They are finding devastation and tragedy everywhere,’ Iris van Deinse, of International Federation of Red Cross and Red Crescent Societies, said in a statement.

Nearby, rescue workers, some using an excavator, were searching for 52 children missing since liquefaction destroyed their bible study camp. Bodies of 35 of the children have been found.

Aircraft, tents, water treatment facilities and generators were the main needs for survivors including more than 70,000 displaced people, according to the national disaster mitigation agency spokesman.

Sitting on the seismically active Pacific Ring of Fire, Indonesia is one of the world’s most vulnerable countries to quakes and tsunamis. A quake in 2004 triggered a tsunami across the Indian Ocean that killed 226,000 people in 13 countries, including more than 120,000 in Indonesia.

Adding to Sulawesi’s woes, the Soputan volcano in the north of the island, 375 miles northeast of Palu, erupted on Wednesday but there were no reports of casualties or damage.