An Indonesian fashion designer is selling a $5,000 handbag made from alligator tongue and a human child’s spine.

Arnold Pultra, an Instagram ‘rich kid’, claims that his eerie product is ‘ethically sourced’ from medical surplus in Canada.

The Los Angeles-manufactured ‘one-off bag’, which is marketed as an ‘ideal statement piece’, first went on sale in 2016.

The material of the bag compartment is made entirely from alligator tongue with ‘protruding scar stitching’.

Arnold Pultra claims that his eerie product is ‘ethically sourced’ from medical surplus in Canada, where bone sales are legal

This is ‘complimented by the human spine handle and raw edge finishes,’ according to its previous description on The Unconventional clothing website, before the product was reportedly removed.

On Instagram account By Arnold Pultra, which showcases Pultra’s designs, it is claimed the handle is made ‘of an entire child’s spine who had osteoporosis’.

Pultra said this account is not run by him personally, but he told the Insider website he had ‘contributed’ to it.

The designer refused to confirm when pressed by the website if the spine had belonged to a child.

However experts judged that the handle was indeed a child’s human spine. 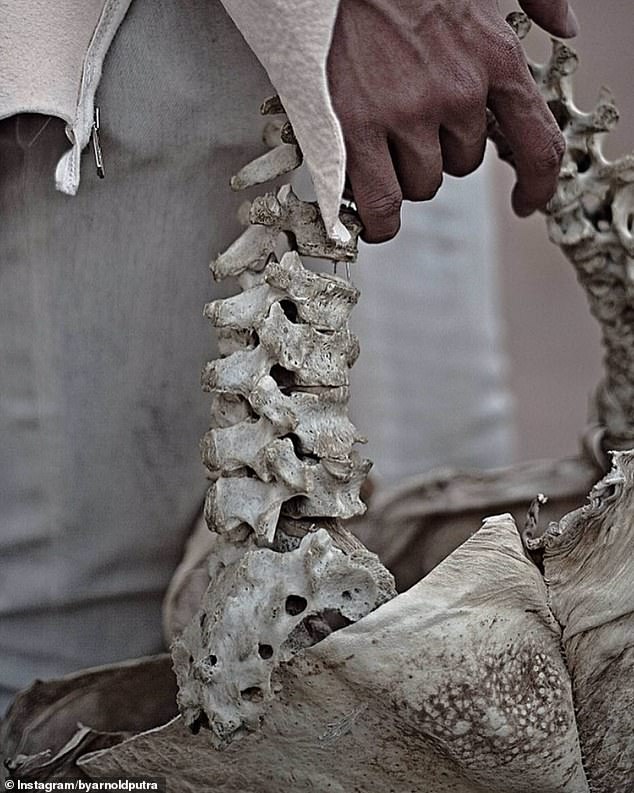 The Los Angeles-manufactured ‘one-off bag’, which is marketed as an ‘ideal statement piece’, first went on sale in 2016

Pultra said that the bones were ‘medically sourced from Canada with papers’ and suggested it was from a company licensed to trade human specimens, which were donated to medical science but are surplus.

Although Pultra claims he does not run the By Arnold Pultra Instagram, he regularly uses his personal account to flaunt his jet-setting lifestyle.

This ranges from lounging on superyachts in Greece to posing beside a gun-wielding tribe in Ethiopia.

He claims to have once splurged $30,000 on a kangaroo-lined alligator jacket, according to Business Insider.

The popular Rich Kids Of Instagram account profiled Pultra, and in 2017 he was named by Tatler Indonesia as one of the ‘most prolific car collectors in Indonesia’.