Indonesian search and rescue teams Wednesday plucked stranded residents from remote islands and pushed into isolated communities desperate for aid in the aftermath of a volcano-triggered tsunami that killed over 400.

But torrential rains amid an ‘extreme weather’ warning hampered the effort and heaped more misery on coastal fishing villages in the region, where a state of emergency has been declared until January 4.

Muddy roads proved an obstacle to convoys delivering heavy machinery and aid to isolated areas as officials warned another yet killer wave could hit the stricken area.

The disaster agency cautioned residents to stay clear of the coast as fresh activity at the Anak Krakatoa volcano, which sits in the middle of the Sunda Strait between Java and Sumatra islands, threatened to spark another tsunami.

A section of the crater – which emerged at the site of the legendary Krakatoa volcano, whose massive 1883 eruption killed at least 36,000 people – collapsed after an eruption and slid into the ocean, triggering Saturday night’s killer wave.

A woman holding an umbrella walks in the rain among debris after a tsunami, in Sumur, Indonesia on December 26 2018 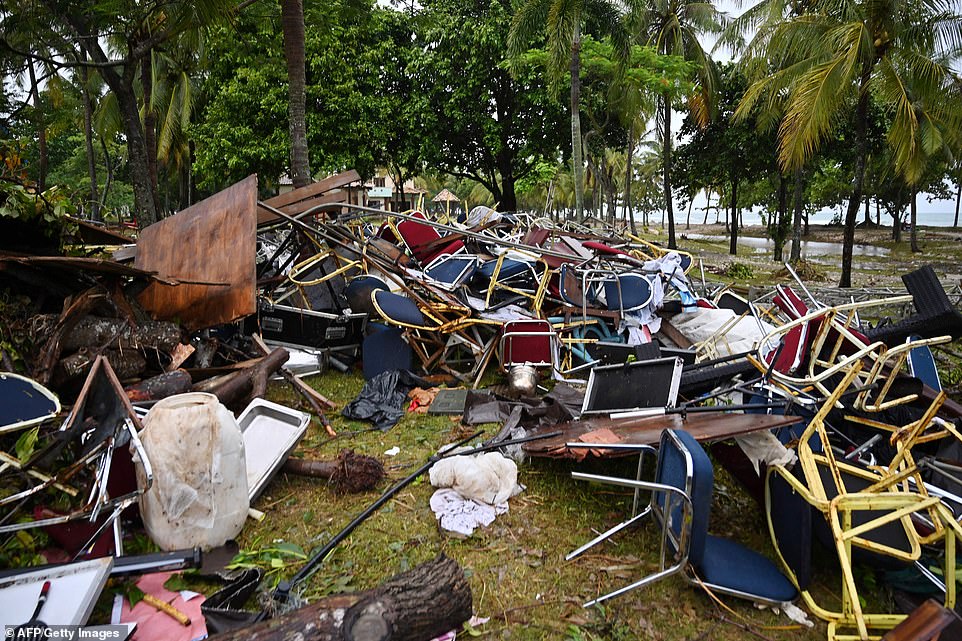 Chairs and items from a family gathering which was taking place when the Seventeen pop band was playing when the tsunami hit, caused by activity at a volcano known as the ‘child’ of Krakatoa 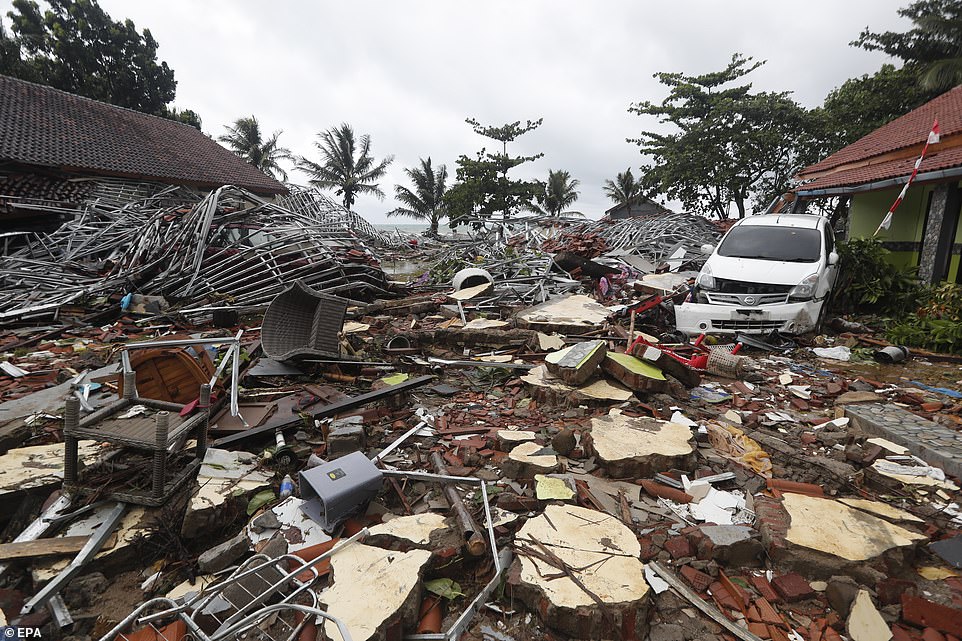 A view of damage with a car sitting among debris after a tsunami hit the Sunda Strait in Pandeglang, Banten, Indonesia 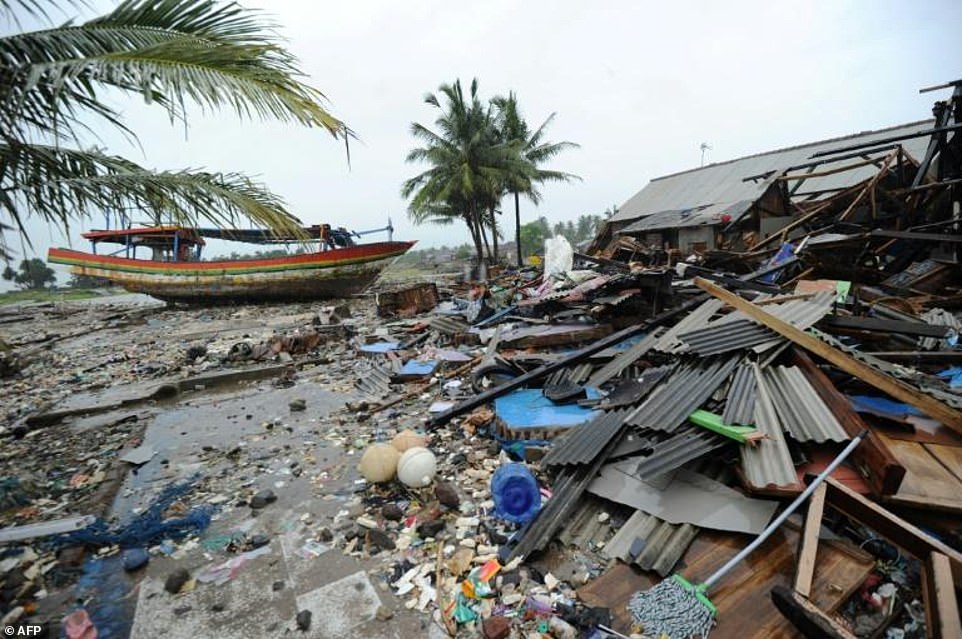 It struck without warning, washing over popular beaches and inundating tourist hotels and coastal communities, leaving a trail of death and destruction in its wake.

‘We have developed a monitoring system focused specifically on the volcanic tremors at Anak Krakatau so that we can issue early warnings,’ said BMKG head Dwikorita Karnawati, adding that a two-kilometre exclusion zone had been imposed.

The disaster agency slightly raised the death toll Wednesday to 430, with 1,495 people injured and another 159 missing. More than 21,000 people have evacuated to higher ground. 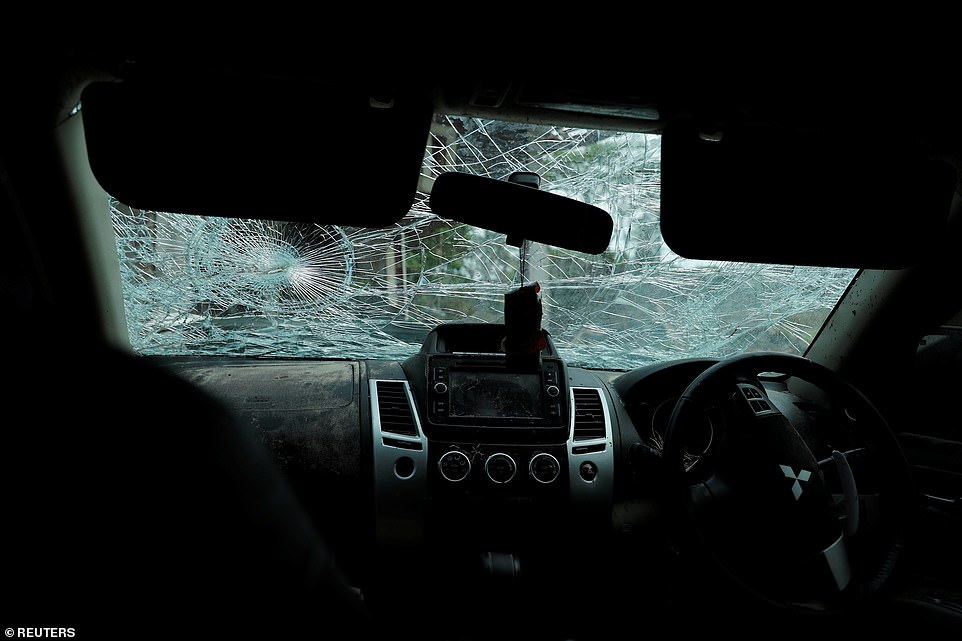 Interior of a damaged car is seen after a tsunami, near Sumur, Banten province, Indonesia, December 26, 2018 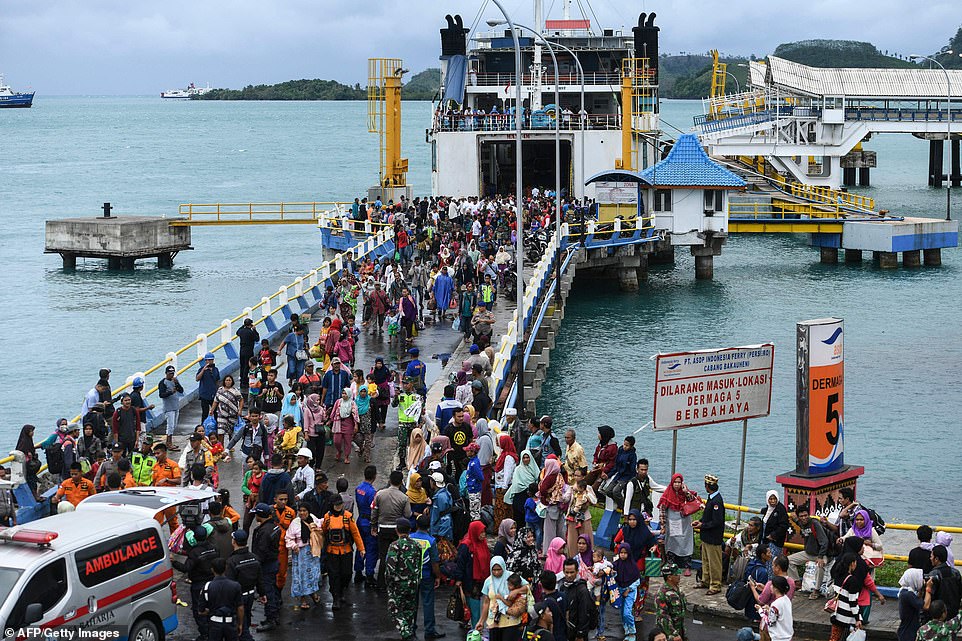 Residents disembark from a ferry at the port after being evacuated from Sebesi Island, in Bakauheni in Lampung province on December 26, 2018 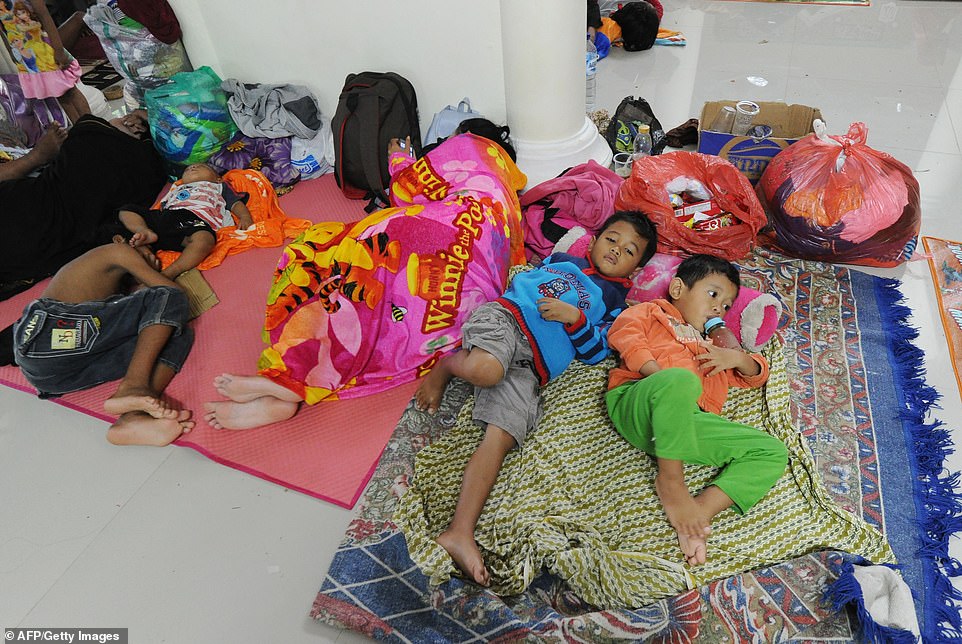 Young tsunami survivors rest in a mosque in Tenjolahang, Banten province on December 26, 2018, after a tsunami – caused by activity at a volcano known as the ‘child’ of Krakatoa – hit the west coast of Indonesia’s Java island on December 22 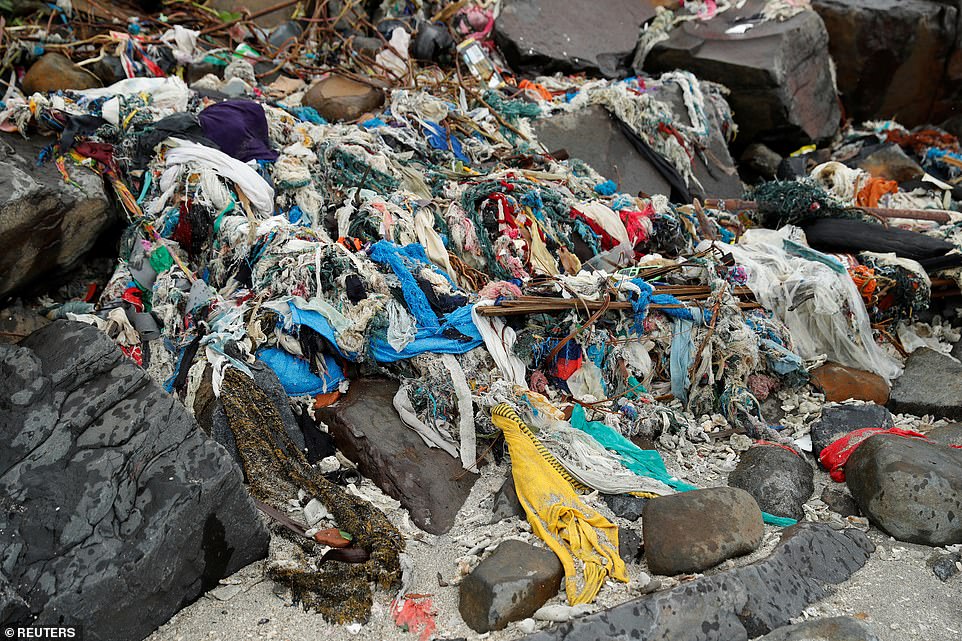 Medical workers have warned that clean water and medicine supplies were running low – stoking fears of a public health crisis – as thousands of displaced survivors cram shelters and hospitals.

On Sebesi Island in the middle of the Sunda Strait, helicopters were dispatched to evacuate residents.

Along the coast, thousands of people are staying in tents and temporary shelters like mosques or schools, with dozens sleeping on the floor or in crowded public facilities. Rice and instant noodles have been delivered to many shelters, but clean water, wet weather gear, fresh clothes, and blankets are in short supply, some evacuees said.

Ade Hasanah, 45, staying in an emergency centre with her children, said people were being told not to return to their homes.

‘It’s safe here,’ she said. ‘We hope if the children are safe and the situation is stable, we can go home quickly. We’re restless.’ 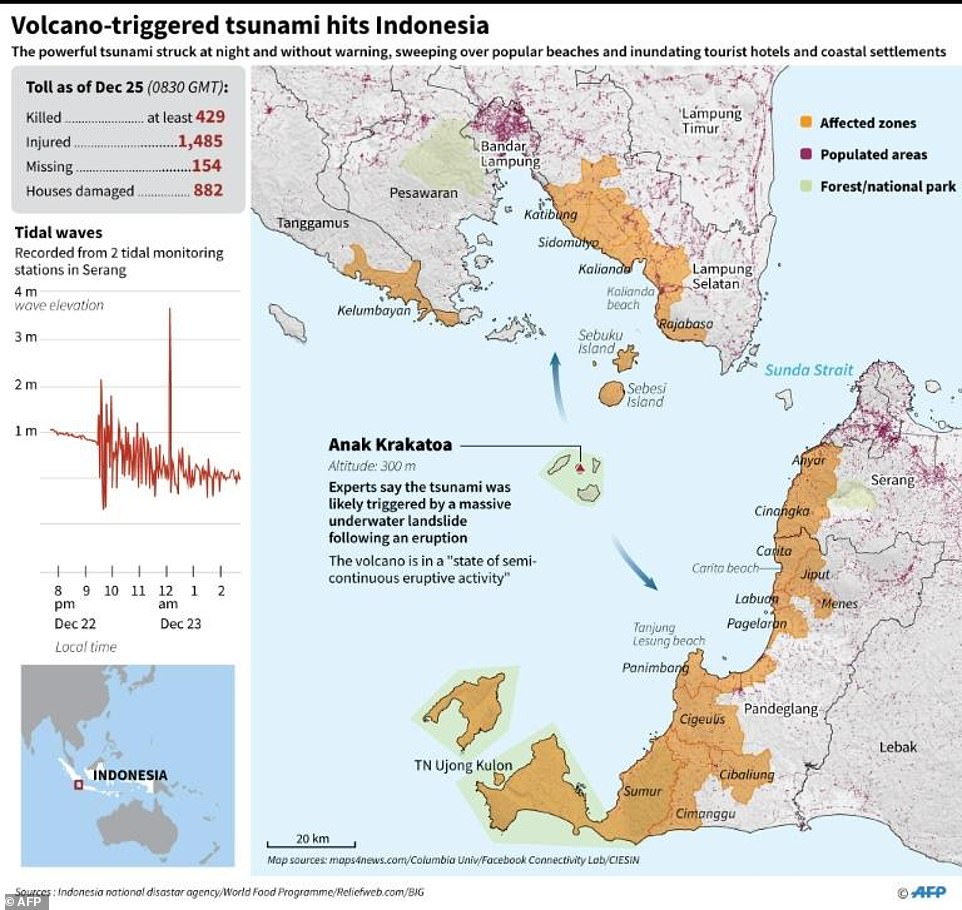 The latest death toll stood at 429, with 1,485 people injured and another 154 still missing

Many were left homeless by the killer wave, and fear going back to their communities.

‘I’m here because people said there could another tsunami,’ Etin Supriatin said from an evacuation centre in shattered Labuan.

The disaster agency dispatched helicopters to drop supplies into hard-to-reach communities, while hundreds of residents on tiny islands in the Sunda Strait were airlifted or taken by boat to shelters.

‘We tried to stay because it’s our island, but after a while we got scared,’ said Sariyah, a 45-year-old resident of tiny Sebesi island, who evacuated to the mainland on a boat.

‘My house has been destroyed so there’s no more reason to stay.’

Sniffer dogs are being used to find those still missing as grief-stricken relatives lined up at identification centres.

But hopes of finding any survivors beneath the rubble have dwindled. 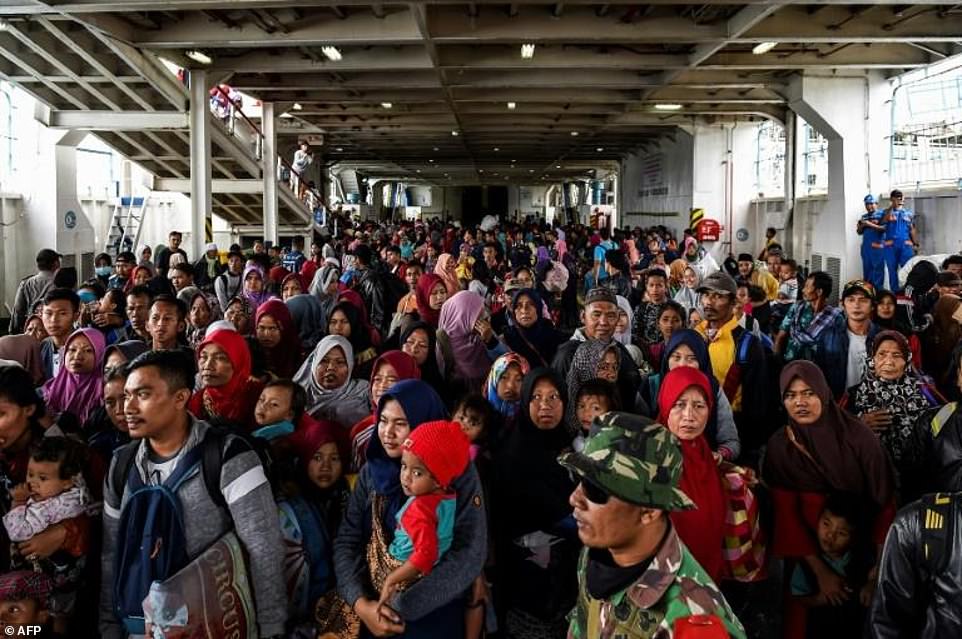 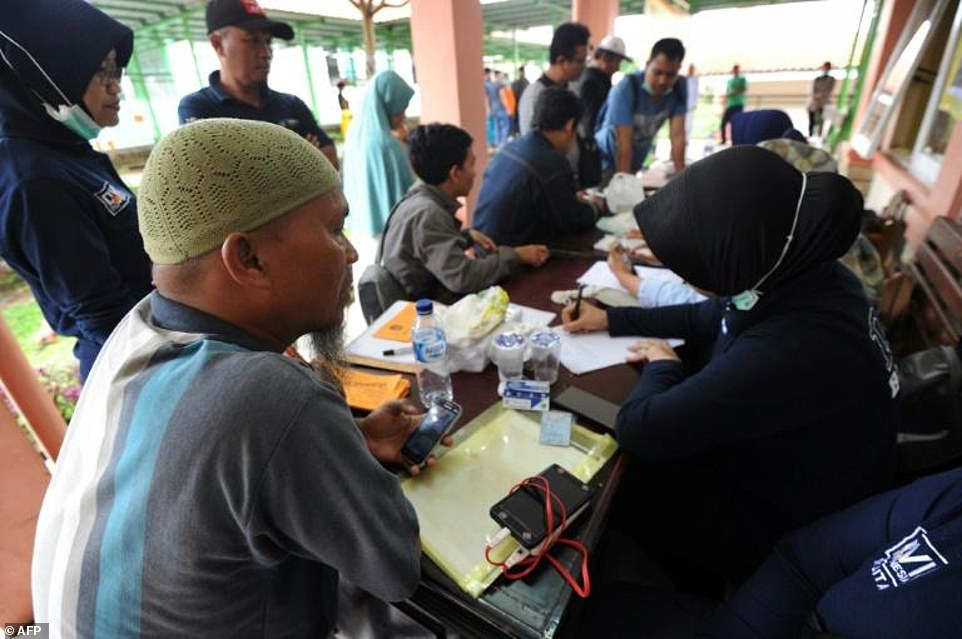 Grief-stricken relatives lined up at identification centres, but hopes of finding any survivors beneath the rubble have dwindled

Tubagus Cecep, 63, waited nervously at the area’s main identification centre to see if a body was that of his missing son.

‘I’m scared my son is dead, but if I keep my faith in God maybe he could have been swept away somewhere and is still alive,’ he said.

At the Tanjung Lesung resort, cars and minibuses had been thrown against buildings, concrete walls cracked into small pieces and uprooted trees spread around. A wooden sign that read ‘Good Times’ lay on the ground.

The tsunami struck the resort as more than 200 workers from the state electricity company were watching pop band ‘Seventeen’ perform. 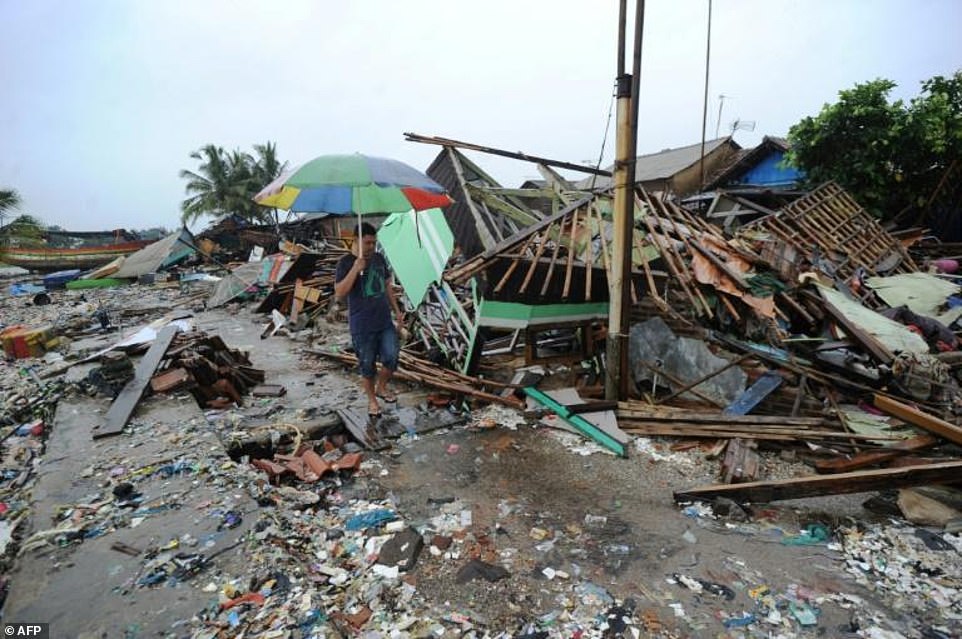 The tsunami was Indonesia’s third major natural disaster in six months. According to the Indonesian National Board for Disaster Management (BNPB), at least 429 people are dead after the tsunami hit the coastal regions of the Sunda Strait 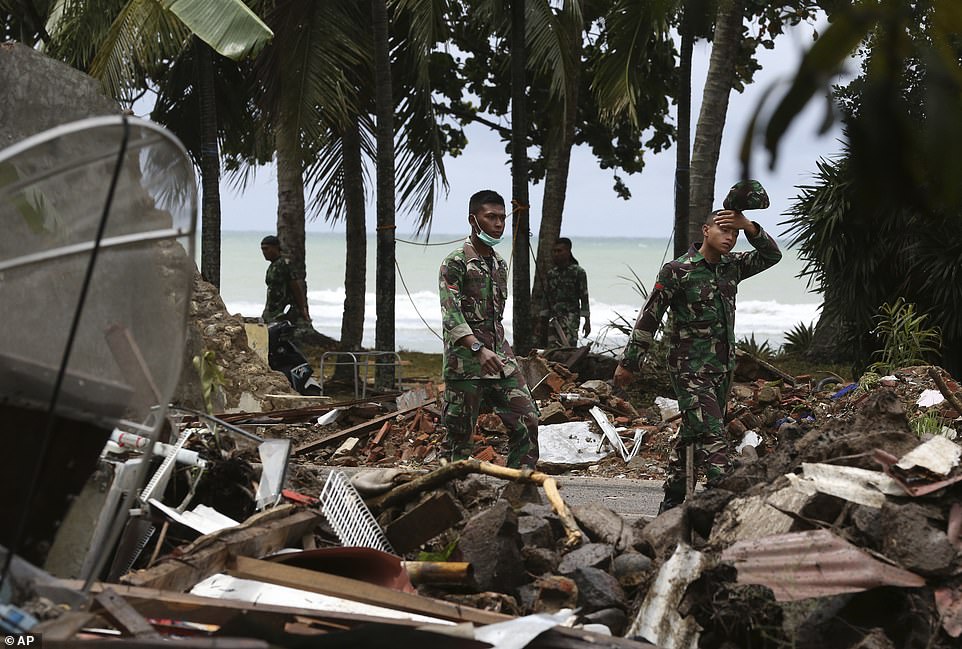 Indonesian soldiers walk near debris at a tsunami-ravaged area in Carita on Boxing Day. Indonesian authorities asked people to avoid the coast in areas where a tsunami killed hundreds of people last weekend in a fresh warning issued on the anniversary of the catastrophic 2004 Asian earthquake and tsunami

The four-member group was hurled from the stage as the water slammed into the audience – only the band’s lead vocalist survived.

The tsunami was Indonesia’s third major natural disaster in six months, following a series of powerful earthquakes on the island of Lombok in July and August and a quake-tsunami in September that killed around 2,200 people in Palu on Sulawesi island, with thousands more missing and presumed dead.

The waves engulfed fishing villages and holiday resorts, leaving a coast littered with the matchwood of homes, crushed vehicles and fallen trees. Children’s toys and rides at a seaside carnival in Sumur were left scattered along a swampy beach.

The surge of seawater also left dozens of turtles, weighing several kilograms, stranded on land, and some volunteer rescuers worked to carry them back to the sea.

Indonesia, a vast Southeast Asian archipelago, is one of the most disaster-hit nations on Earth due to its position straddling the so-called Pacific Ring of Fire, where tectonic plates collide.

This year, the country has suffered its worst annual death toll from disasters in more than a decade.

As aid workers raced to help victims of the latest killer wave to hit Indonesia, thousands prayed at mass graves on Wednesday to mark the 14th anniversary of the 2004 Boxing Day tsunami.

The annual memorial for one of the worst natural disasters in history came after the long-buried remains of dozens of Boxing Day tsunami victims were found last week in Aceh province, which was devastated by the 9.1-magnitude ‘megathrust’ earthquake.

Nearly 170,000 people died in Indonesia when the quake struck Aceh, a predominantly Muslim province in the northern tip of Sumatra island, sparking massive waves that also slammed into coastal areas as far away as Somalia. 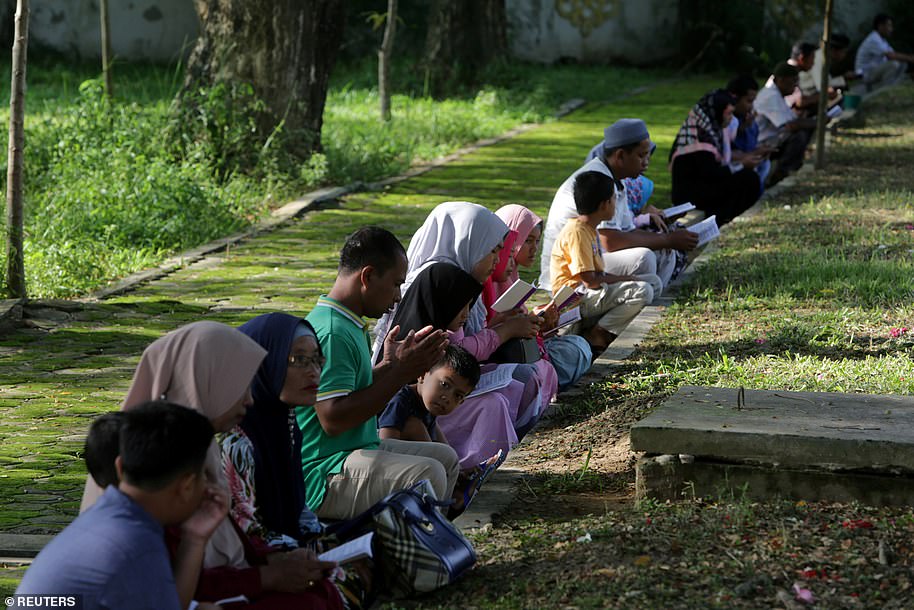 Acehnese pray and read part of the holy Koran at a tsunami mass graveyard during a commemoration of the tsunami disaster in Banda Aceh, Indonesia, December 26, 2018

The disaster killed about 50,000 people in other countries around the Indian Ocean, bringing total deaths to about 220,000.

The commemorations are this year particularly poignant after a volcano-triggered tsunami struck another part of the country without warning on Saturday, sweeping over popular beaches and inundating tourist hotels and coastal communities, killing over 400.

Thousands paid tribute to the 2004 tsunami victims at a mass grave in Aceh Besar regency where nearly 47,000 are buried under a grassy field dotted with black rocks meant to symbolise a tomb.

‘None of my family members have been found, but I believe they’re buried here,’ said mourner Dewina, who carried flowers and incense sticks to burn.

Kharuddin, who goes by one name like many Indonesians, said he also thinks his lost relatives are buried at the vast site.

‘I lost my mother and three siblings. I survived after floating out to sea and was rescued by a fishing boat,’ he told AFP. 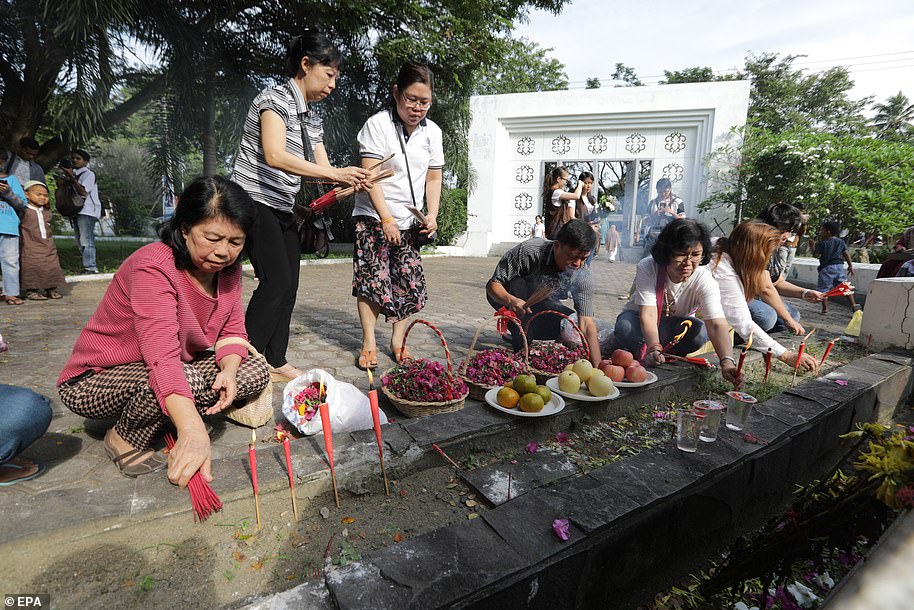 Acehnesee people from the Tionghoa Ethnic community burn incense on the tsunami victim’s memorial, in rememberance of their family members lost in the disaster

‘Fourteen years have gone by and life goes on. All we can do is pray.’

Last week, the remains of more than 30 victims of the 2004 tsunami were found by villagers near a construction site of a newly built housing complex in Aceh. Another dozen bodies were later discovered at the same site.

The first victim identified was Taufik Alamsyah’s wife, who still had her driver’s licence in a wallet stuffed into her pants pocket.

‘I could not believe that I found my wife after all these years of searching and praying,’ he told AFP in a recent interview.

‘I’ve been waiting and wanting to see (her body) with my own eyes.’

The 50-year-old civil servant has now buried wife Yunida’s remains in the backyard of his new house, where he lives with his current wife.

Alamsyah also lost his five-year-old daughter and in-laws in the 2004 disaster, and has suffered from depression ever since.

The distraught father, who comes back to his old house every year to pray, grabbed his daughter in the chaos, but the force of the water swept her away.

He had taught his daughter to memorise the family’s address so she could return home if she ever got lost.

‘If she was alive, she’d probably be in college now,’ he said. 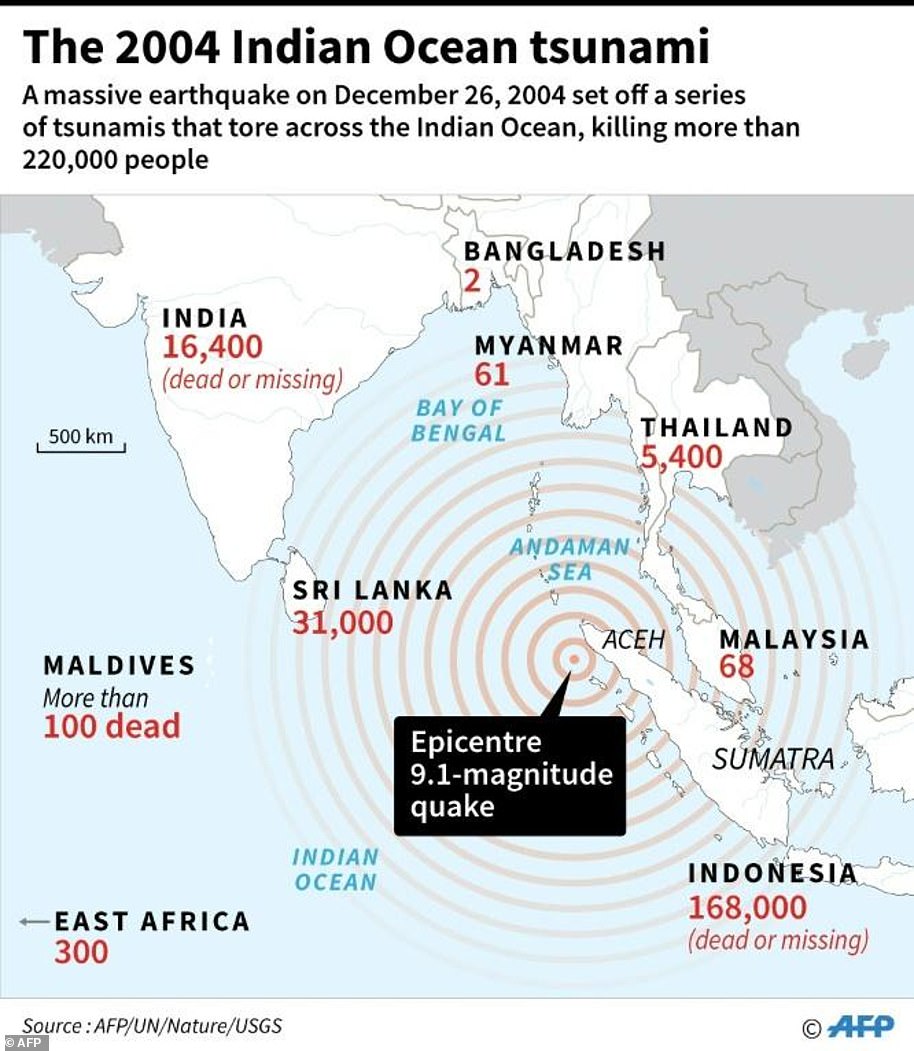