A small potted plant put in an office twelve years ago has evolved into a 300-foot monster which fills the entire building and hangs over every desk.

Des Brennan, 54, bought the ivy as a small potted cutting a decade ago to brighten up his work space at the company he founded in Stonehouse, Gloucestershire.

He says he placed it in the corner of the office and it quickly grew to around three feet.

But it then ‘absolutely flourished’ – apparently boosted by the florescent lights and warm air. 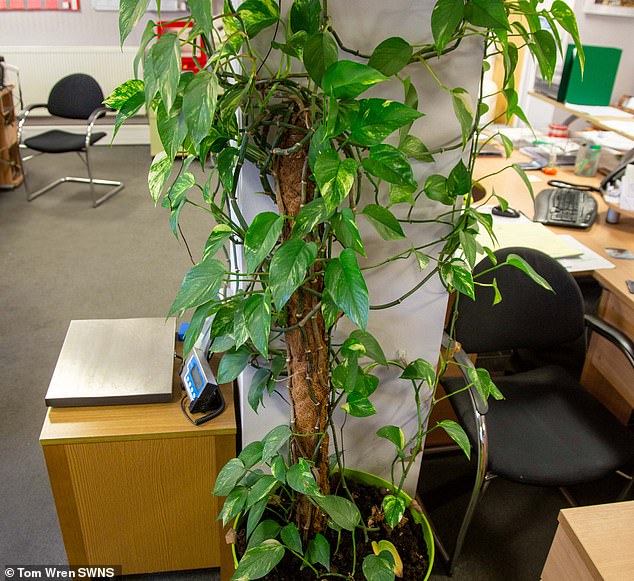 Des Brennan, 54, bought the plant to brighten up the office of the packaging company he founded in 2006 – Protective Solutions Ltd. in Stonehouse, Gloucestershire

It now trails up the walls and along the ceiling, dangling around the office building and adorning most desks.

The ever-growing ivy is reminiscent of the aggressive species of plant in John Wyndham’s dystopian novel The Day of the Triffids.

In the novel, a carnivorous species of plant called a triffid takes over the world and starts killing people. 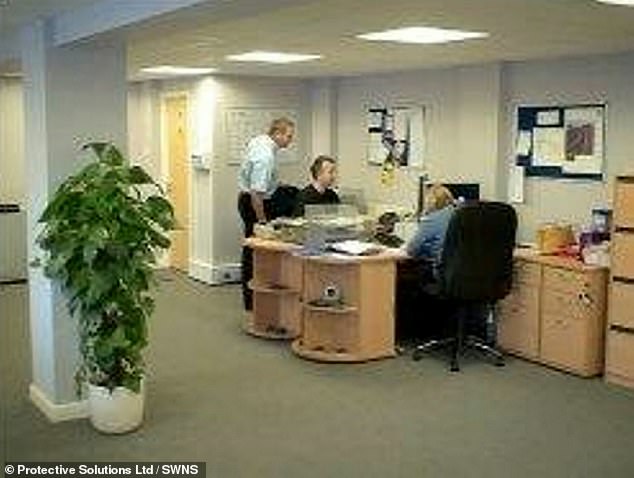 Simpler times: The now overgrown ivy started off as just a small potted cutting when Mr Brennan bought it twelve years ago

And Mr Brennan said that the plant is still growing at a rate of around six inches every month.

He said: ‘It’s done really well. We put it in the corner of the office in the pot that it came in, and it just flourished.

‘I think it likes the fluorescent lights in here, and the heat. In the summer, when the leaves all come out, it’s more like a canopy in here.’ 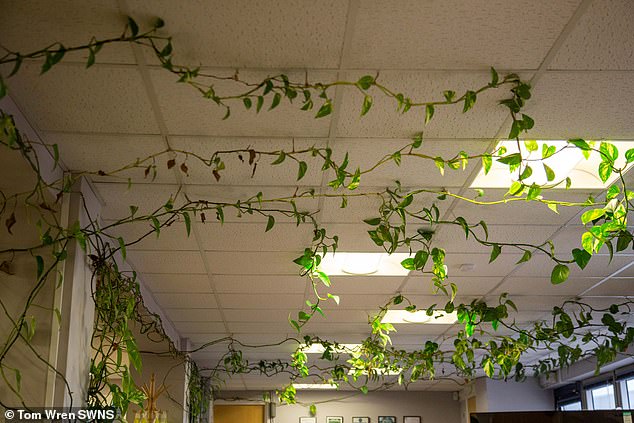 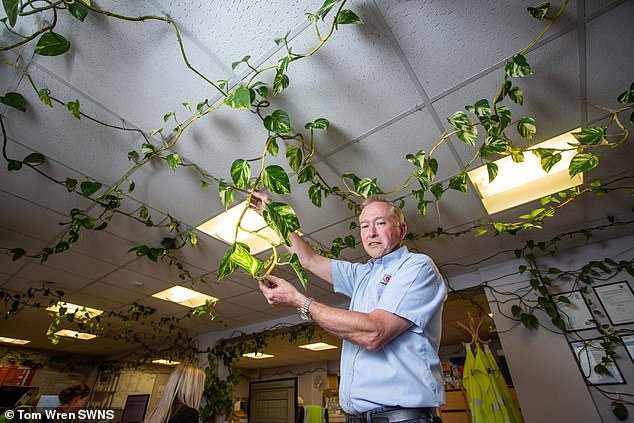 He said: ‘It’s done really well. We put it in the corner of the office in the pot that it came in, and it just flourished’

And Mr Brennan added that the plant is very low-maintenance, requiring almost no looking after at all.

He said: ‘It takes almost nothing. In the winter months, when all the leaves die off, we don’t have to do anything with it.

‘We only water it once every couple of days, about half a pint of water. It does cost a fortune in elastic bands though, to pin it onto the roof.

‘It’s a very defiant plant. If you happen to catch a bit of branch in a door, and break it off the plant, it seems to grow a few more shoots in its place.’

He added: ‘It’s a big talking point. A lot of people know our office as the one with the big plant.

‘There’s a team of eight of us here. Some of the girls talk to the plant, but I don’t believe in all that stuff. 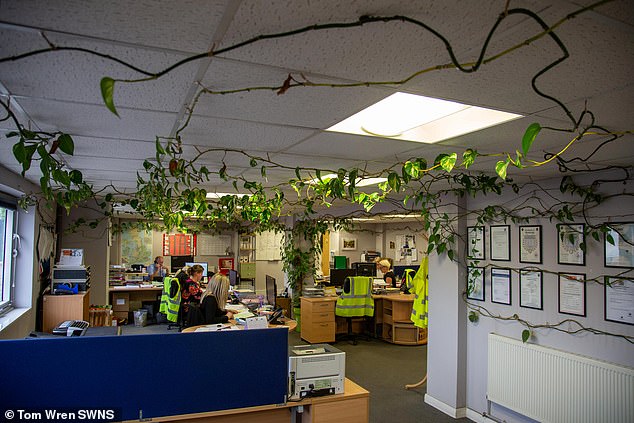 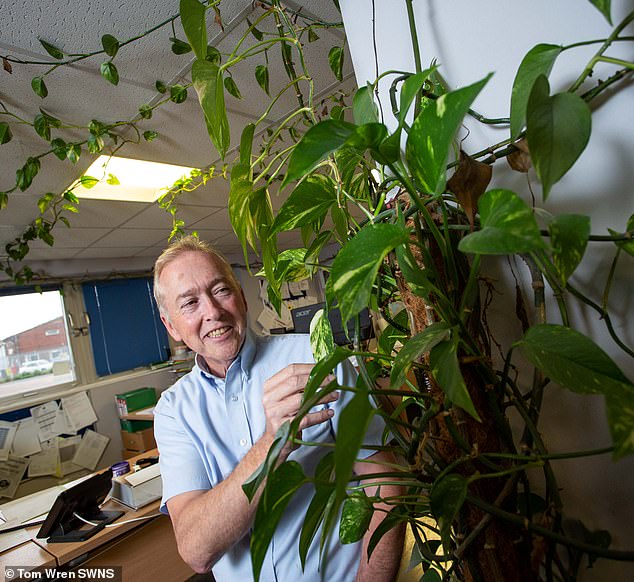 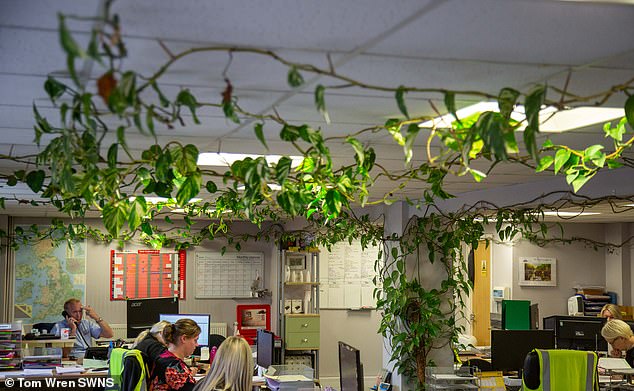 Mr Brennan added: ‘It’s a very defiant plant. If you happen to catch a bit of branch in a door, and break it off the plant, it seems to grow a few more shoots in its place’

‘We do get quite a few spiders hiding in the plant, but I don’t blame the plant for that.

We have a lot of fun at Christmas – we hang lights and baubles from it.

‘When it grows too big to fit in the office, we’ll have to punch a hole in the roof and let it grow up on the mezzanine.

‘It goes round our office a couple of times, and then criss-crosses across the ceiling too. It’s absolutely massive.’ 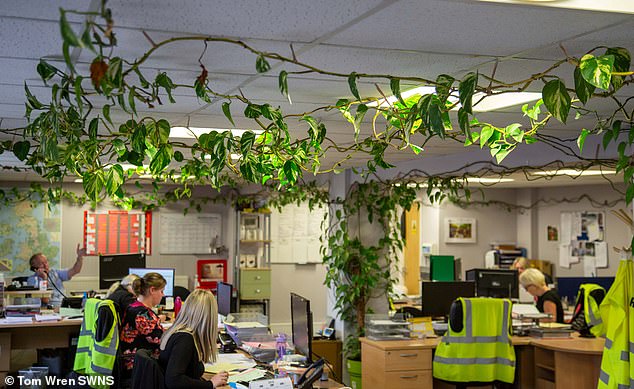 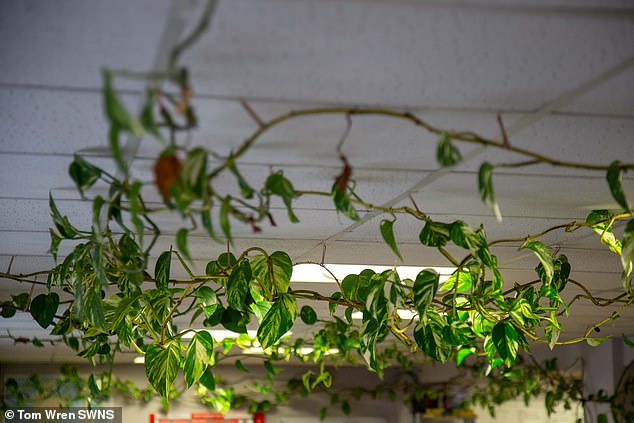