An Instagram influencer with with 2.6 million followers has shared her disappointment after she was unable to sell just 36 T-shirts from her clothing brand.

Arii, an 18-year-old from Miami, Florida, first rose to internet fame on the platform musical.ly, and now has millions of Instagram followers and 837,000 YouTube subscribers.

But despite seemingly having so many fans, she was unable to move a very limited quantity of merchandise — and social media users are shocked. 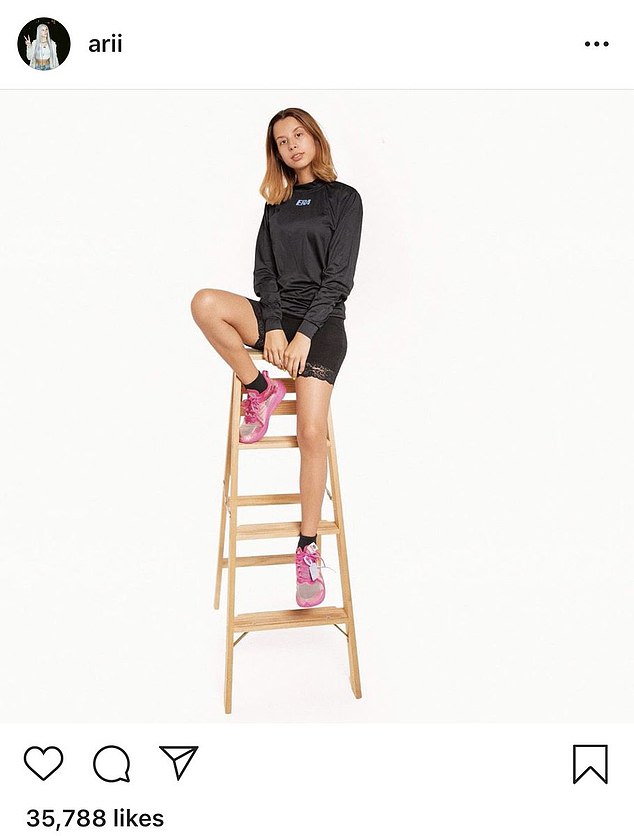 Business: The 18-year-old recently tried to launch a clothing line called ERA and started with a limited first drop, sharing the images on Instagram where she gains tens of thousands of likes 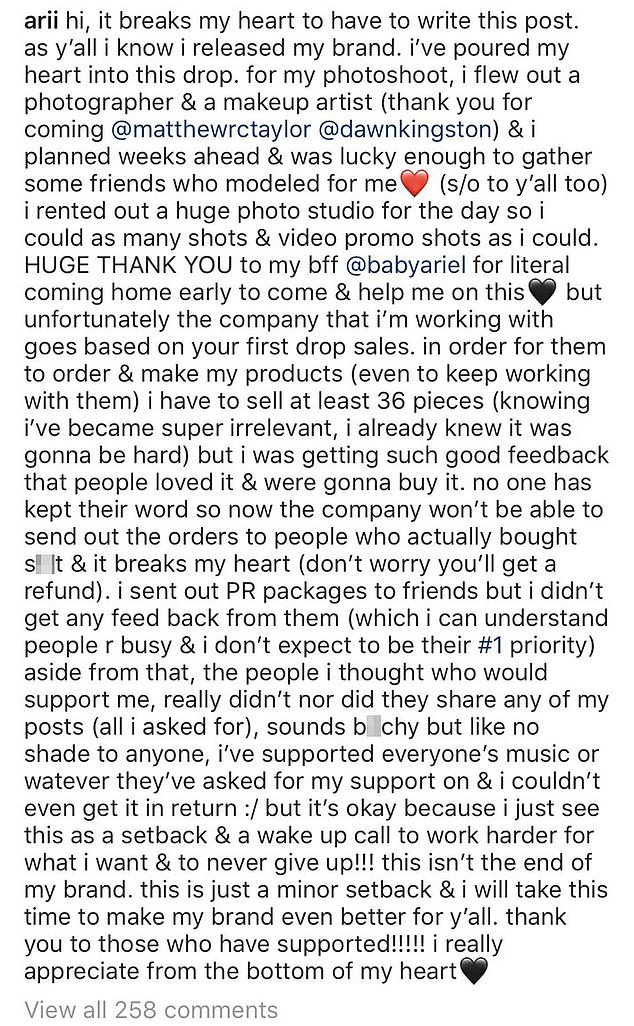 Oops: She said in a now-deleted post that the company making the brand required 36 pieces to be sold before doing a wider run — but they were not sold

Recently, Arii — whose real name is Ariana Renee — was working on launching her own clothing brand called ERA.

But the company producing the brand reportedly needed to see at least 36 pieces of the first limited run of products sell before agreeing to do a wider release.

And unfortunately for Arii, that didn’t happen: She wasn’t able to sell the minimum 36 T-shirts to move forward, despite her huge follower count.

She shared her disappointment in a lengthy Instagram caption that has since been deleted.

‘Breaks my heart to have to write this post,’ she wrote. ‘As y’all know I released my brand. I’ve poured my heart into this drop. For my photoshoot, I flew out a photographer & a makeup artist … and I planned weeks ahead and was lucky enough to gather some friends who modeled for me.

‘But unfortunately the company that I’m working with goes based on your first drop sales. 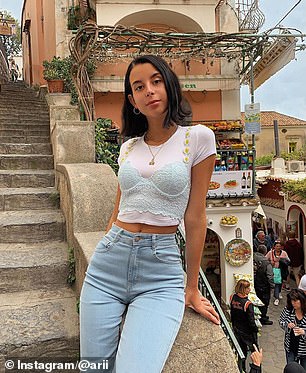 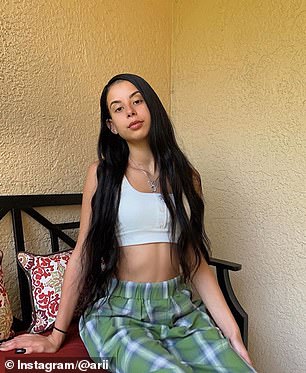 This is fame now: She first rose to fame on the musical.ly app and now just posts lots of pictures of herself 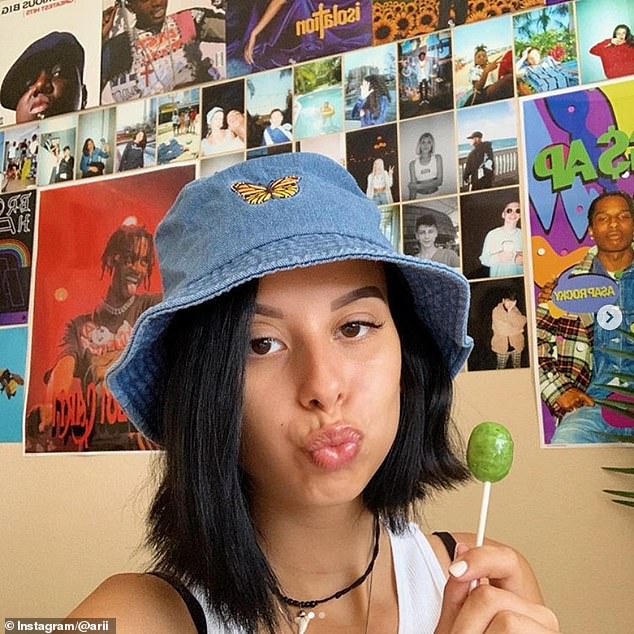 Sad: Arii expressed disappointment that her fans didn’t support her by buying her shirts

‘In order for them to order and make my products (even to keep working with them) I have to sell at least 36 pieces (knowing I’ve become super irrelevant, I already knew it was gonna be hard) but I was getting such good feedback that people loved it and were gonna buy it.

‘No one has kept their word so now the company won’t be able to send out the orders to people who actually bought s*** and it breaks my heart.

‘The people I thought who would support me, really didn’t nor did they share any of my posts (all I asked for), sounds b****y but like no shade to anyone, I’ve supported everyone’s music or whatever they’ve asked for my support on and I couldn’t even get it in return.’

She added that this is a ‘wake-up call to work harder’ and it ‘isn’t the end of my brand … just a minor setback.’

But while Arii may have been hoping her post would garner sympathy or regretful comments, instead it made her the subject of mockery — and she has since taken it down. 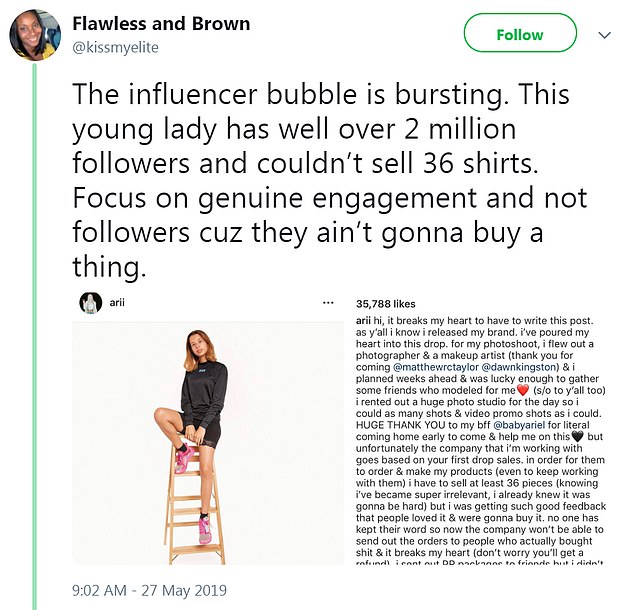 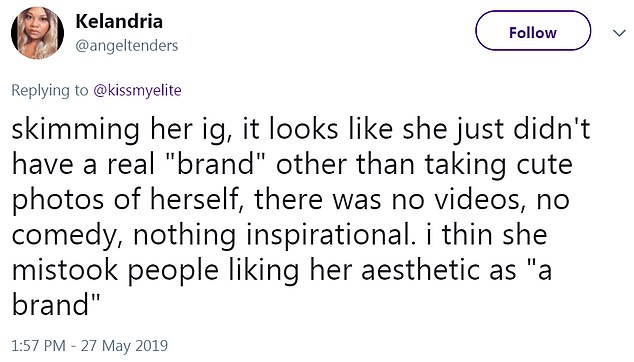 Why are you famous? Some blamed the fact that her page has no personality so it’s confusing what her ‘brand’ is

Your fault: One commenter scolded her, saying her design was ‘generic’ and that she didn’t even promote it properly 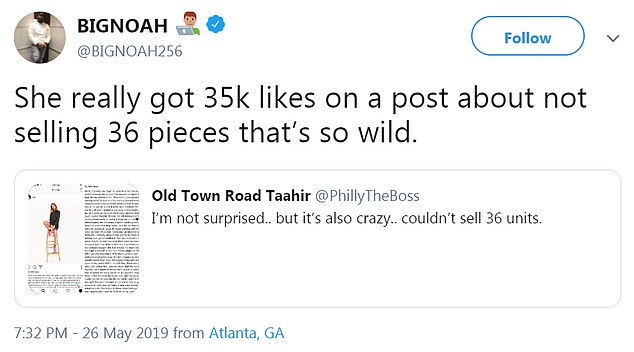 Hilarious: This person found it funny that she couldn’t sell 36 pieces but could get 35,000 likes on a post about the failure

That’s wild! The whole thing is quite mind-boggling for some

But people are still sharing their confusion on Twitter.

‘The influencer bubble is bursting,’ wrote @kissmyelite. ‘This young lady has well over 2 million followers and couldn’t sell 36 shirts. Focus on genuine engagement and not followers cuz they ain’t gonna buy a thing.’

‘Making a t shirt isn’t launching a brand,’ wrote another, while dozens more said the problem was that her product offering wasn’t interesting or innovative.

Several people said it’s no wonder she didn’t sell anything, pointing out that she posts a lot of photos of herself but there’s no ‘brand’ or personality to her page.

‘I just checked out her insta and it was super dry. Photos, captions. Barely any engagement. Can’t feel her personality. Overall boring,’ wrote one.

‘Part of the problem IMO: the captions don’t tell me anything. It’s just a bunch of generic phrases you might find on a bumper sticker, and then zero hashtags. The tags are one of the simplest forms of marketing on IG,’ said another. 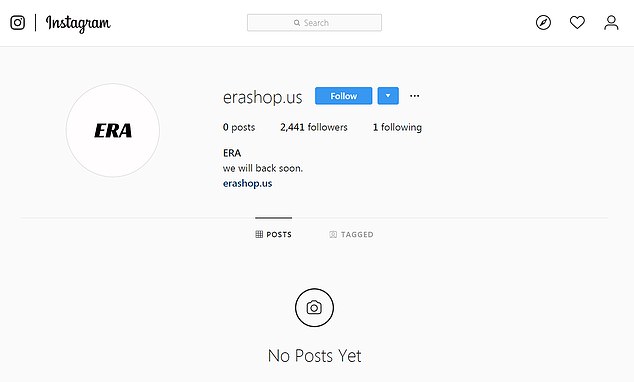 Where’s the promotion? The page for her brand, ERA, has no posts and very few followers 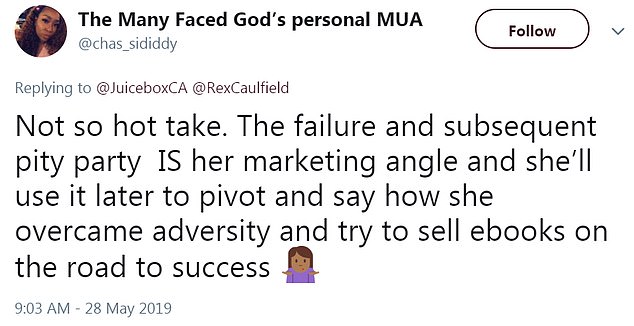 Other scolded her for poor marketing, saying she never properly promoted the brand and couldn’t expect followers to find it or want it.

‘Girl… you literally never promoted it,’ one wrote. ‘I looked on [Instagram] and your shop Instagram. Where are the pics of you in your merch? And why is the design so generic? I know people didn’t support, but if you don’t even go hard for your own merch… why would they?’

In fact, the Instagram page for the brand ERA has no posts at all and just 2,437 followers.

‘Look at her feed vs her product line. These aren’t even close to the same aesthetic. If you can’t imagine her wearing any of these, why would her followers?’ he wrote.

‘The elephant-in-the-room: many female influencers overindex on male followers, so you could argue having male products is smart (if she does indeed have a large male following),’ he went on, ‘butttttt those male followers likely aren’t gonna buy. That’s not their clothing purchase habit. 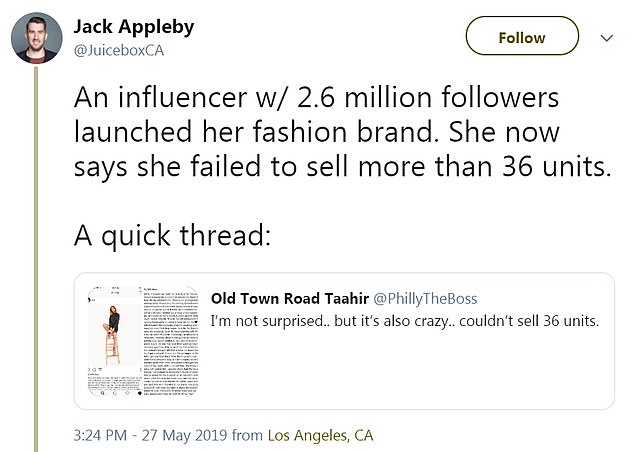 Dissecting it: Self-described ‘campaign and content expert’ Jack Appleby wrote a whole thread about the failure 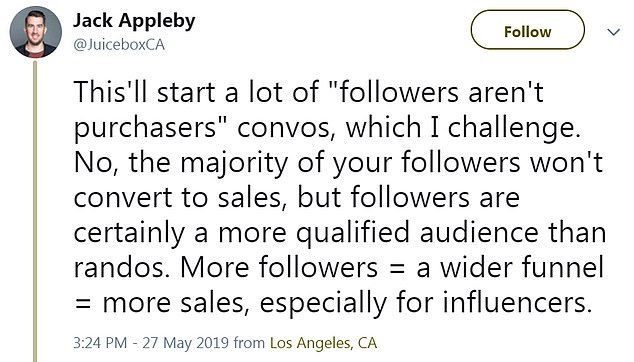 Smarts: He pointed out that while followers don’t necessarily mean customers, 2.6 million followers should mean at least a few customers 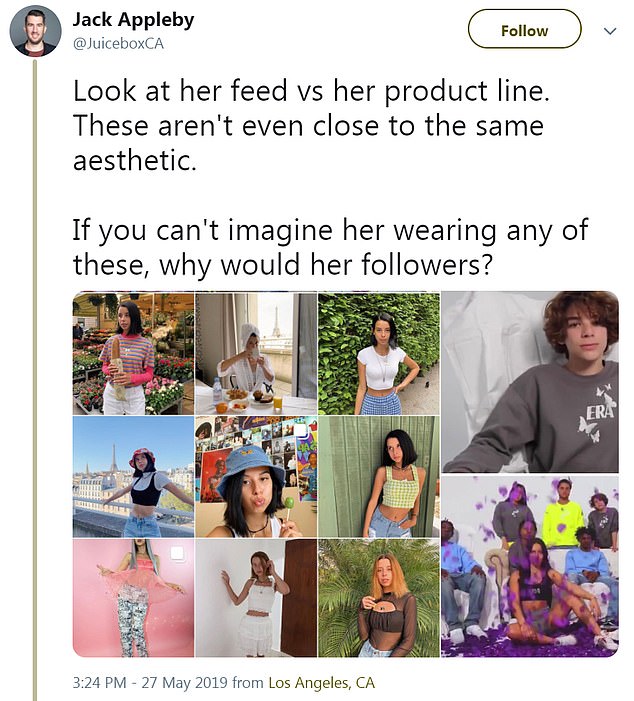 Disconnect: He also noted that what she was selling looks nothing like what she wears 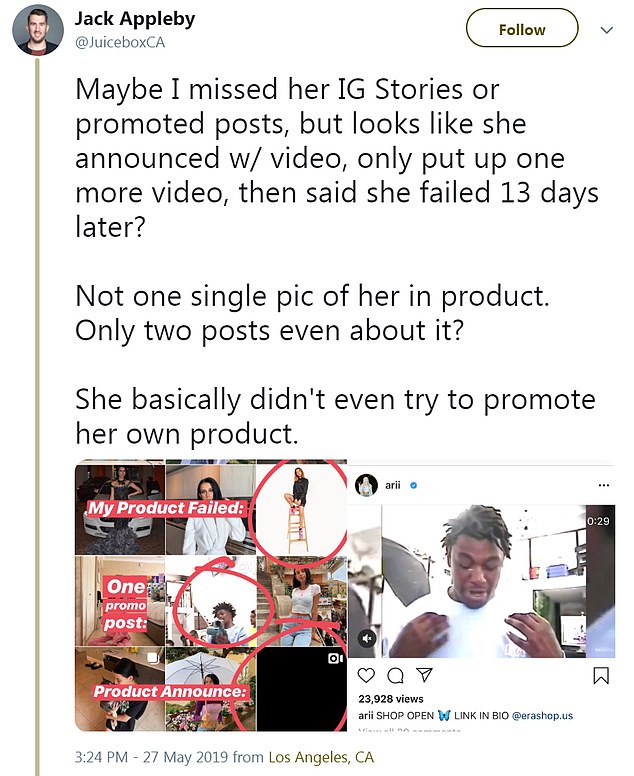 Problems here: Like others, he said that she didn’t promote the brand as she should have 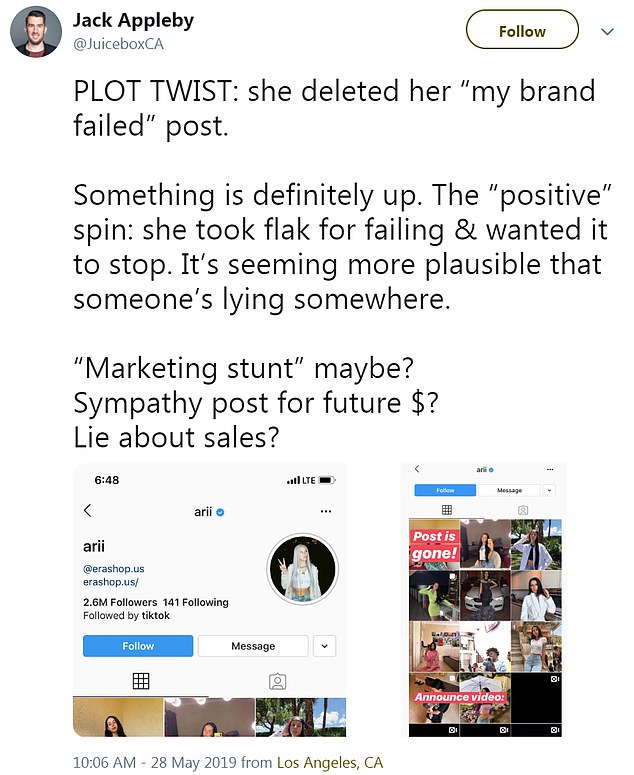 ‘Maybe I missed her IG Stories or promoted posts, but looks like she announced w/ video, only put up one more video, then said she failed 13 days later? Not one single pic of her in product. Only two posts even about it? She basically didn’t even try to promote her own product.’

He also said he found something ‘fishy’ about the whole thing.

‘At 2.6 million followers, 36 units should’ve been easy, no matter how bad the product is — she presumably has 36 crazy diehards who’d do anything for her. Suspect there’s a lie here somewhere.

‘PLOT TWIST: she deleted her “my brand failed” post. Something is definitely up. The “positive” spin: she took flak for failing & wanted it to stop. It’s seeming more plausible that someone’s lying somewhere.

Some others had the same idea, wondering if the ‘failed brand’ was itself meant to drum up press for a future release.