A dim-witted driver in a Holden Commodore made the detective work very easy for police following a hit and run incident.

Dash cam footage captured the man doing an illegal burnout before crashing into a parked car and fleeing the scene.

The incident occurred at Smeaton Grange, an industrial area in Sydney’s west, on February 20 last year. 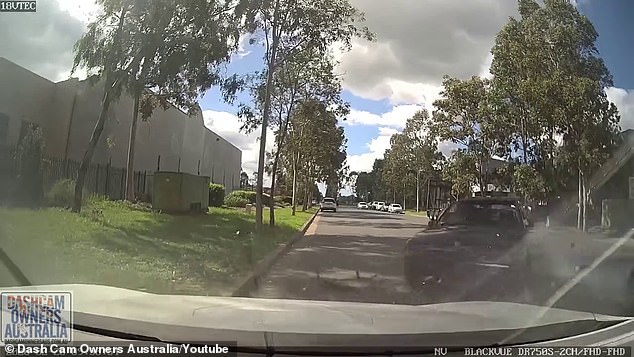 After smashing into a parked car, the foolish hoon (pictured) then quickly fled the scene

The vehicle owner left his number plate at the scene, and armed with dash cam footage, officers were able to track down the driver.

The hoon, who was driving a VL turbo-charged Holden Commodore, was caught on camera soon after leaving a nearby repair shop.

Seconds later he ‘spooled up’, with his subsequent burnout resulting in a collision with a stationary car.

One viewer sarcastically commented that the driver was a ‘nice guy leaving his number plate behind as his contact details’, while a simply said: ‘What an idiot.’

Holden VL Commodores were first introduced in Australia between 1986 and 1988 and quickly became a must have item for thousands of eager rev-heads.

The vehicles typically retail for $5,000, but ‘hotted up’ models can fetch almost double – or in some cases triple – that price with car enthusiasts.

Eastern Creek Raceway in Sydney’s west is also a popular venue where many people legally race their VL cars. 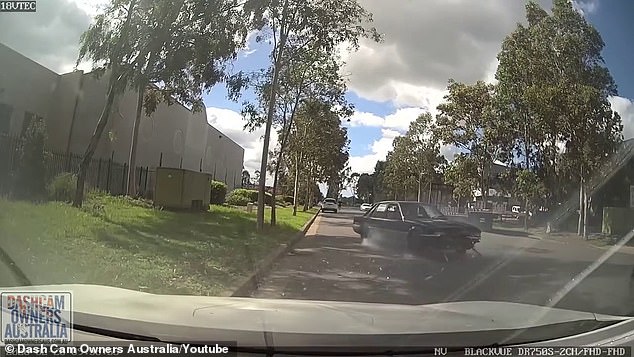