Inside abandoned hospital ‘haunted by a girl’s ghost’

These haunting images have emerged from inside an abandoned state hospital where it is said the ghost of a young girl walks the corridors.

Legend states the girl, dressed in a white gown, stares out of the window of the Fairfield Hills State Hospital in Newtown, Connecticut.

The hospital is a derelict psychiatric asylum where tales of cruelty and mistreatment have cast a shadow over the establishment.

Haunting images have emerged from inside an abandoned state hospital where it is said the ghost of a young girl walks the corridors. The hospital is a derelict psychiatric asylum where tales of cruelty and mistreatment have cast a shadow over the establishment 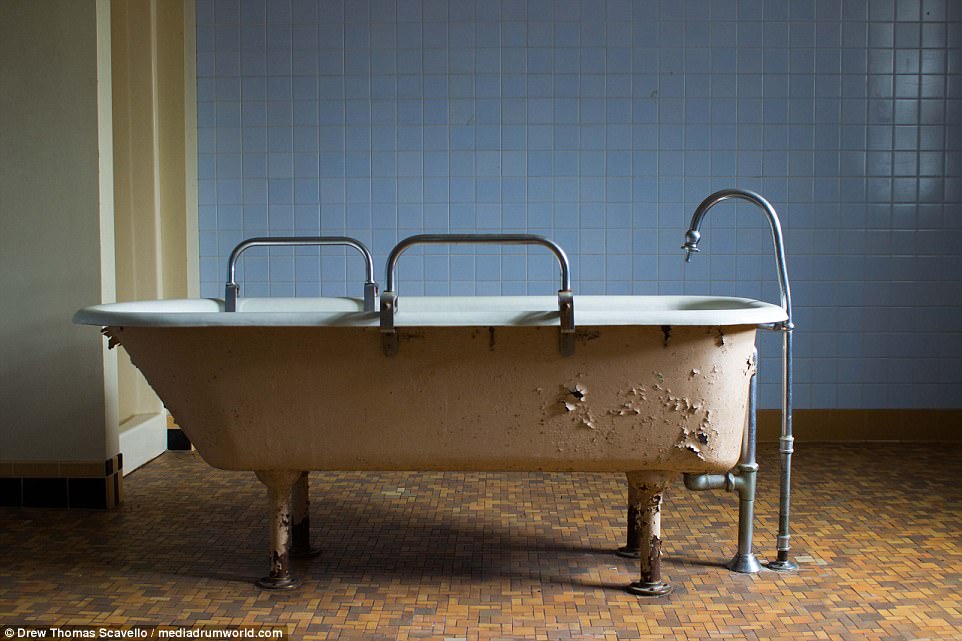 An old-fashioned stand-alone bath sits in the middle of a tiled room. Legend states the girl, dressed in a white gown, stares out of the window of the Fairfield Hills State Hospital in Newtown, Connecticut 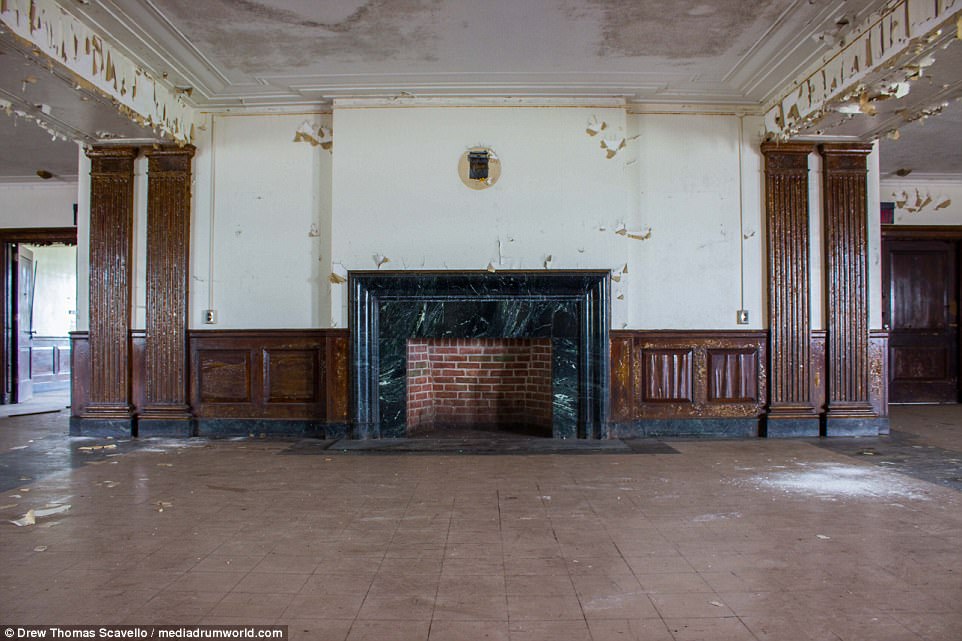 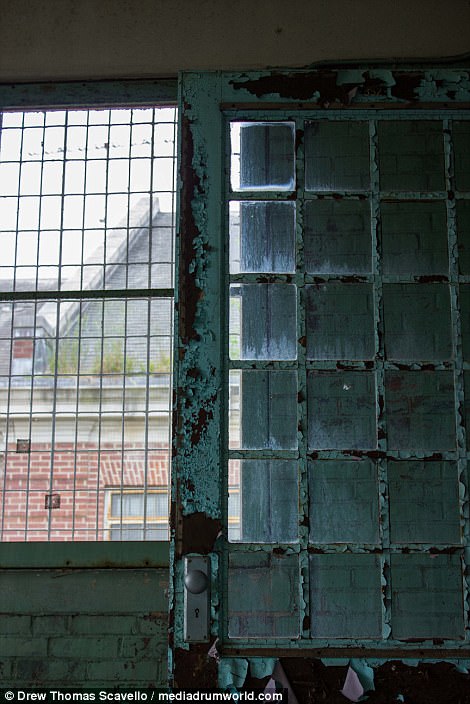 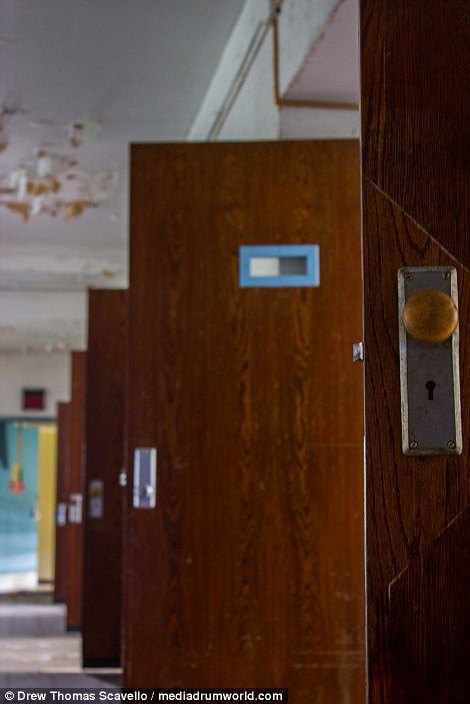 A windowed door is seen ajar on the left with turquoise paint flaking off it as a row of wooden doors are flung open with small, glass letterbox-type windows for doctors to see inside without having to enter a room can be seen right 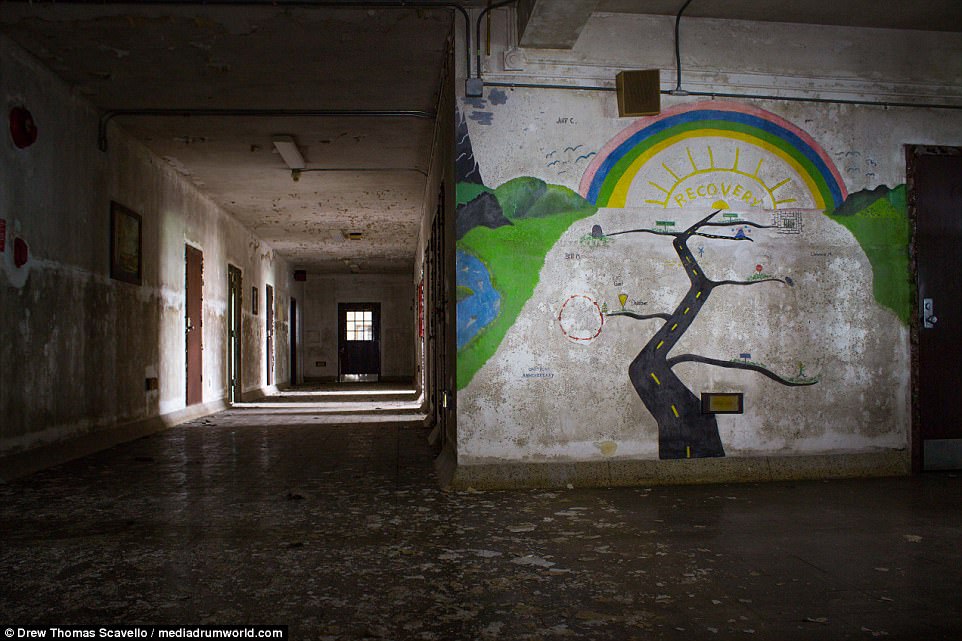 A road to recovery mural on one of the walls has survived the years of neglect, which cannot be said for the rest of the hostpital 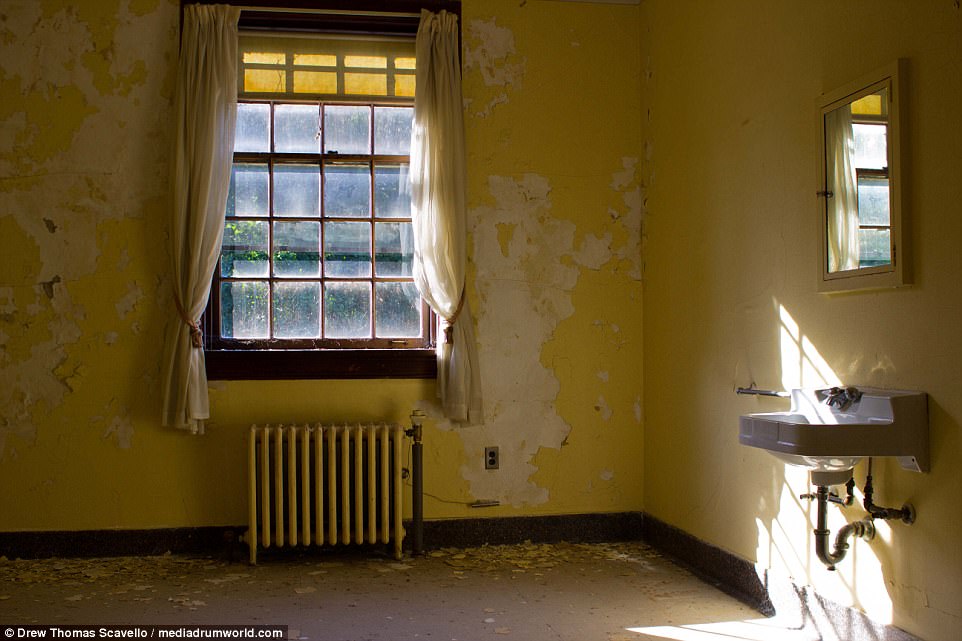 Yellow paint flakes off the walls in a room with a sink in the psychiatric hospital. The curtains can be seen drawn above a radiator

The hospital is said to have been the first place to perform a lobotomy on a mentally ill patient in the United States.

Fairfield has become one of America’s top spots for ghost-hunters who claim to see the young glowing girl in the window, making it popular among locals seeking out supernatural encounters.

The psychiatric hospital appeared under a false name on MTV’s hit show Fear which saw contestants spend a weekend at various haunted locations around the country.

These eerie photographs were taken by urban explorer Drew Thomas Scavello, 27, who said: ‘When I was ten-years-old an MTV Show called Fear was filmed at the hospital,’ said Drew.

‘The episode intrigued me but it wasn’t until years later that I learnt Fairfield was an abandoned state hospital.’

The haunted hospital now stands vacant, with several images showing the peeling paint and crumbling walls of a once prestigious psychiatric hospital.

‘I think that the viewer would be sad to see a public healthcare facility falling into such a sad state of disrepair,’ Drew explained. 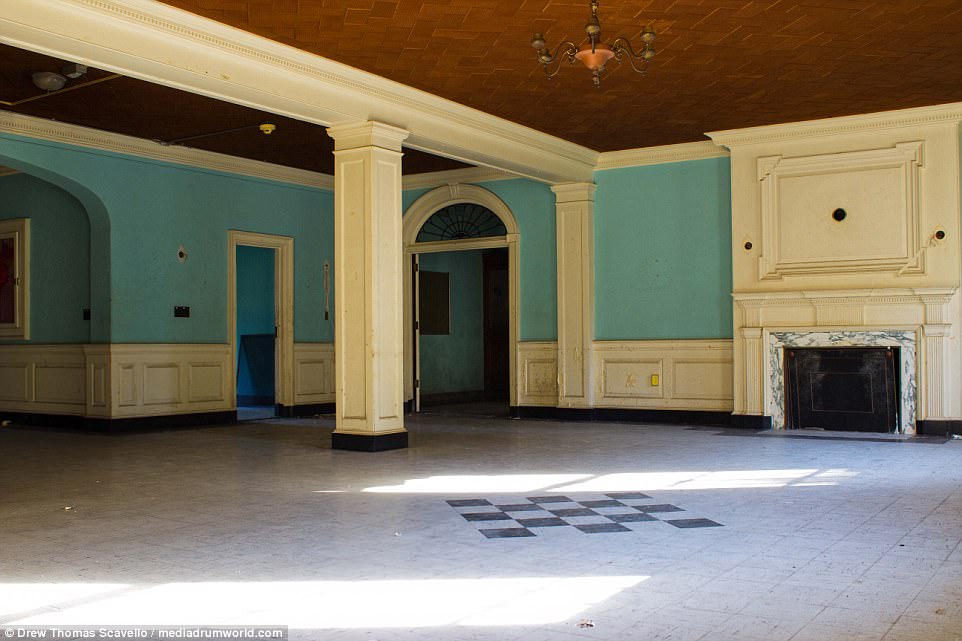 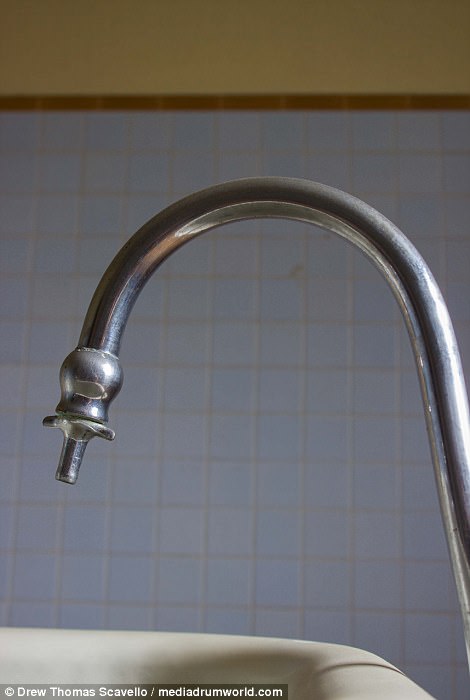 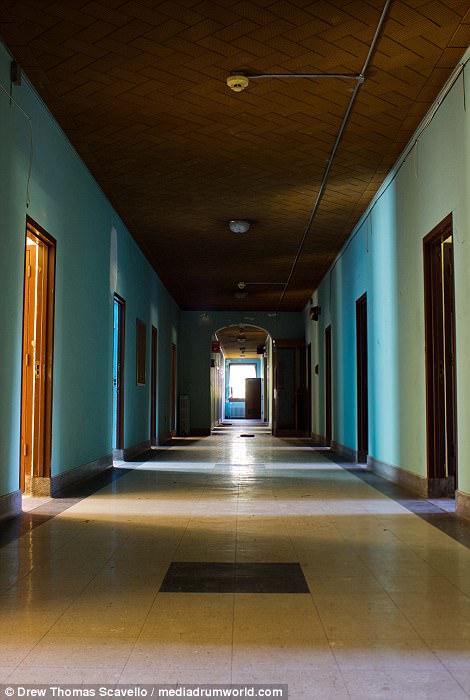 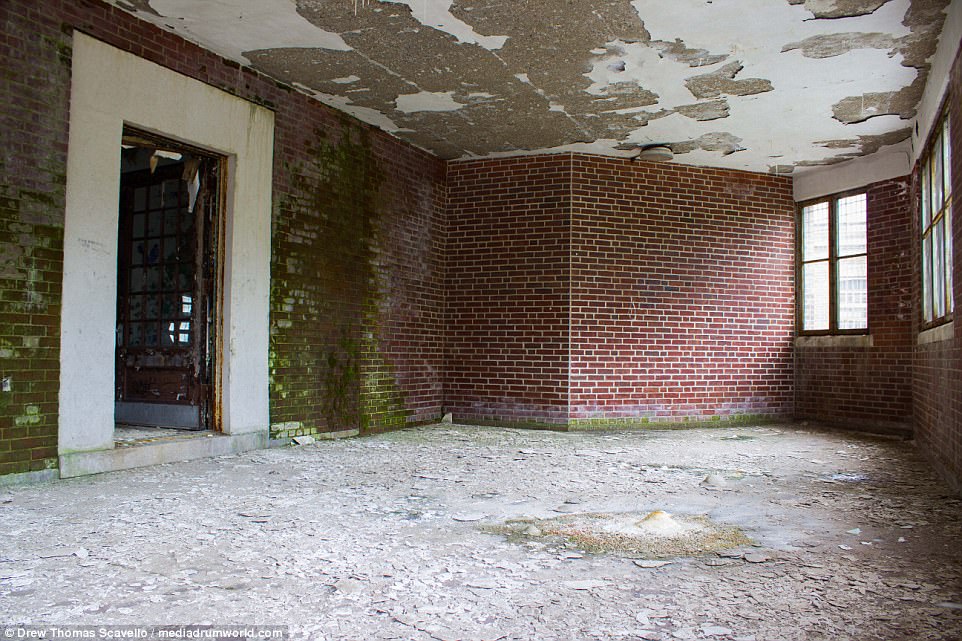 Green moss has started to grow over the red bricks and the paint and plaster that was once on the ceiling can be seen either dangling down from above, like in the doorway, or on the floor 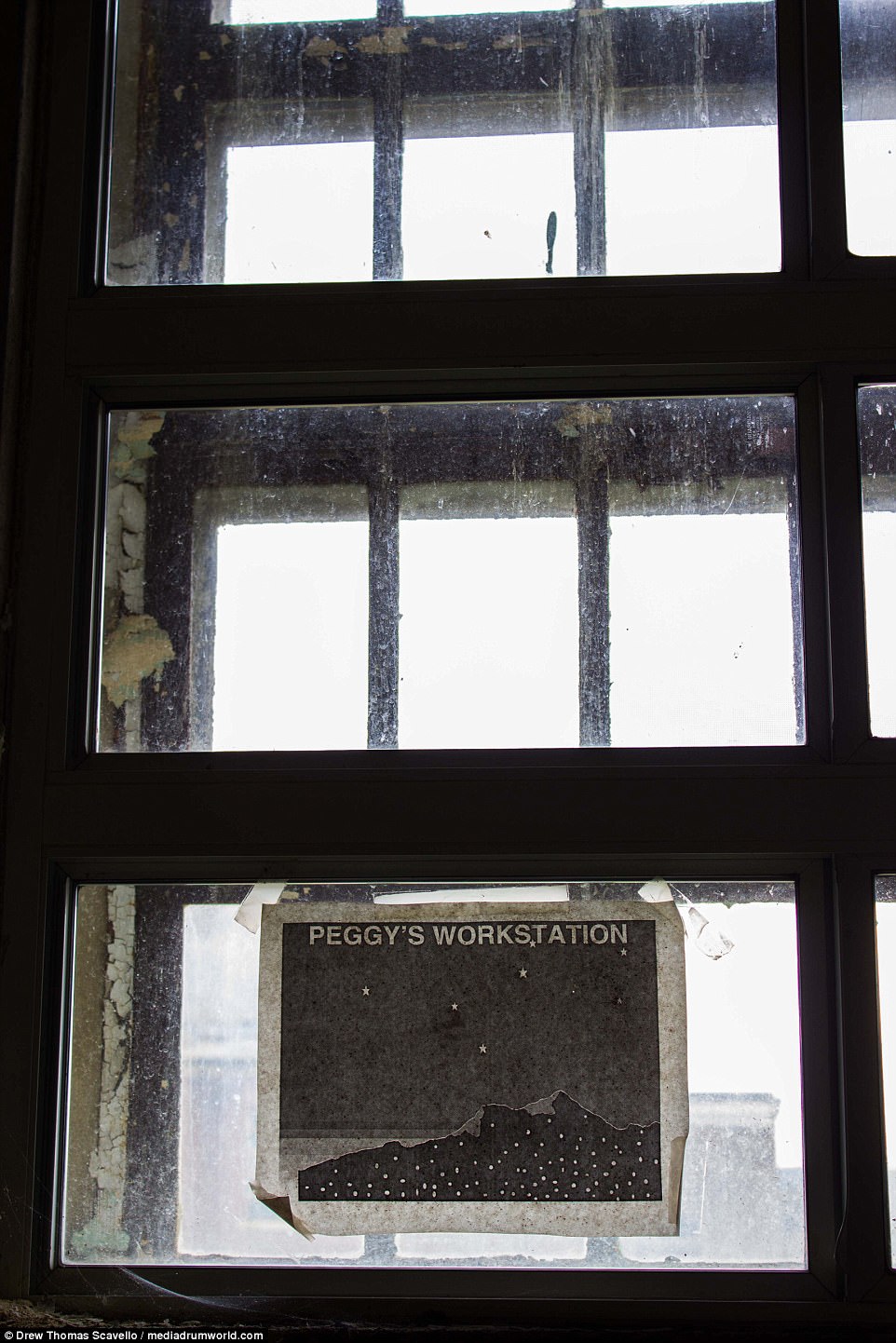 An old poster hangs in a filthy window at the former psychiatric asylum. It reads ‘Peggy’s Workstation’ and shows a mountain at night with stars in the sky 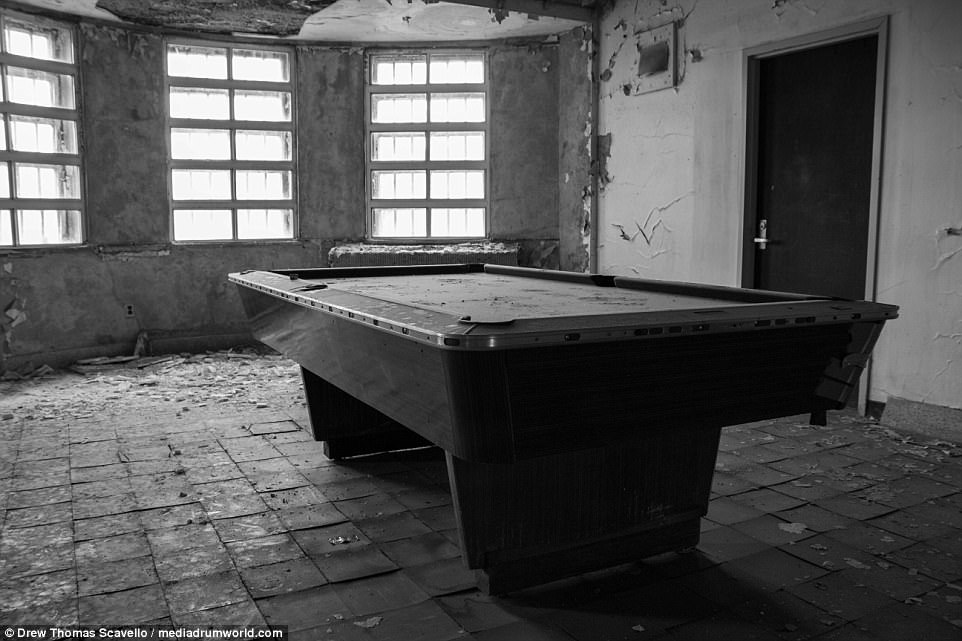 A pool table sits in the center of a room. At the foot of the table are three bay-style windows and the walls and roof can be seen crumbling around it 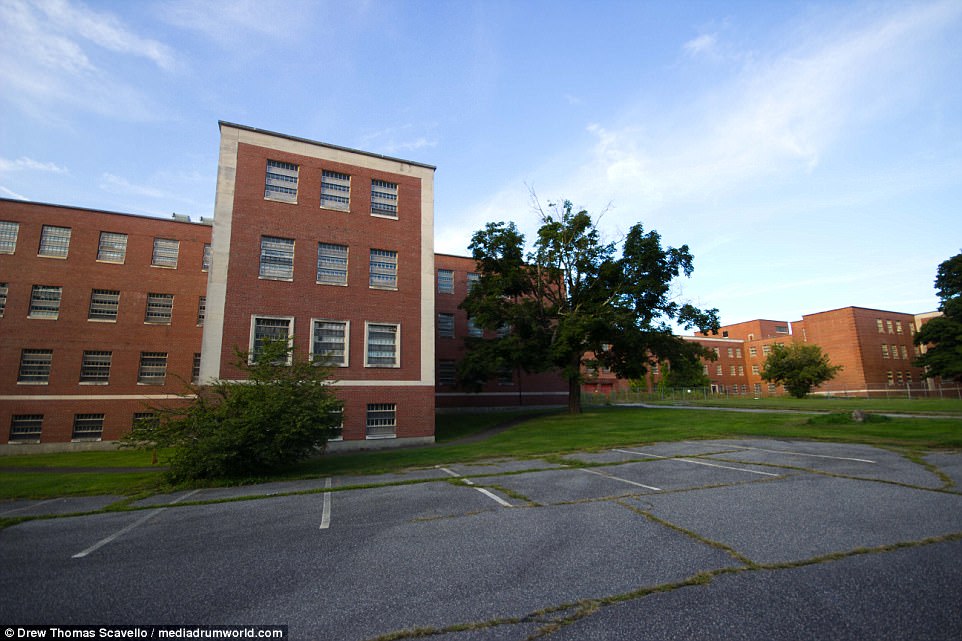 The outside of the hospital. The red bricks, windows that appear to have bars up and the grass pushing through the car park give it an eerie look

‘An almost perfectly preserved set of abandoned buildings have been vacant for over twenty years.

‘It’s a wonder why these buildings could not have been reused for some viable purpose.’

He hopes his photography of the abandoned hospital gives a glimpse into the lives of its previous patients.

‘It is a sobering reminder that anyone can wind up in a facility such as this at some point in their life,’ he added.