If you want to know how an Ajax team with the resources of a Championship side have reached the Champions League semi-finals, you have to go back to a meeting held in a house in Amsterdam in December 2010.

Sitting around the table were Frank Rijkaard, Marco van Basten, Dennis Bergkamp and other Ajax legends.

Whatever their status, they would accept a place lower in Dutch football’s pantheon than another man in attendance – Johan Cruyff, who would eventually be ‘knifed in the back’ at his lowest moment. 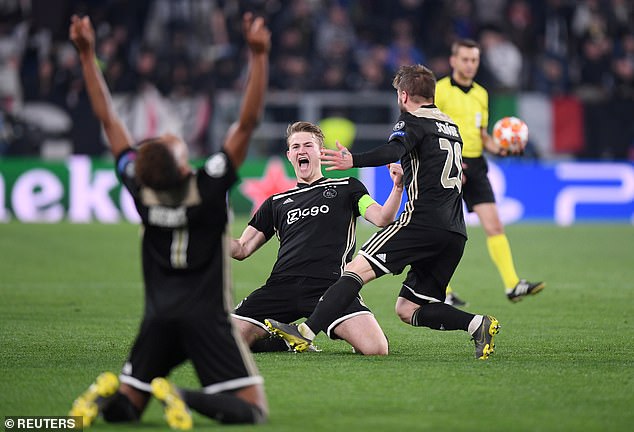 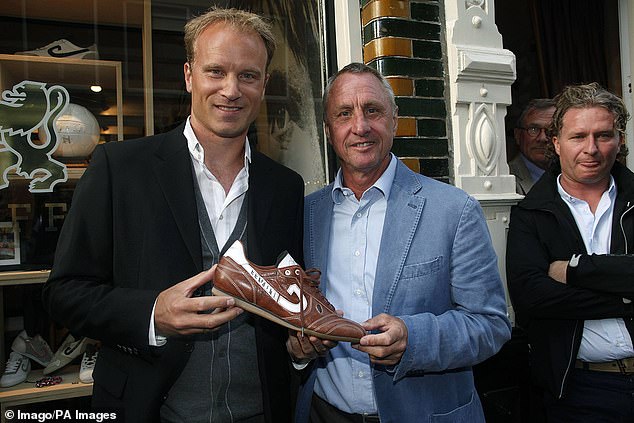 First, the highs. Cruyff had written a column claiming Ajax wasn’t Ajax anymore after years of disarray. That anger was the starting point of a path that has led to the development of stars like Matthijs De Ligt and Donny van de Beek.

It is the story of how Ajax revitalised itself and, if they beat Spurs, how they are on the cusp of doing something finances would suggest is impossible.

Then again, as Cruyff said: ‘I’ve never seen a bag of money win a football game.’

Along with Cruyff and those icons, two coaches were sitting in the room – Ruben Jongkind and Wim Jonk. They were acolytes of Cruyff and already employed at Ajax.

Jongkind tells Sportsmail: ‘We were invited there. I was not a former player so I’m at this secret meeting with these guys and it was like “woah, s***”.

‘The former players had made analysis but they did not have solutions.

‘Wim Jonk and myself had written down a plan, a way you should reorganise the academy and some other ways to improve the club. 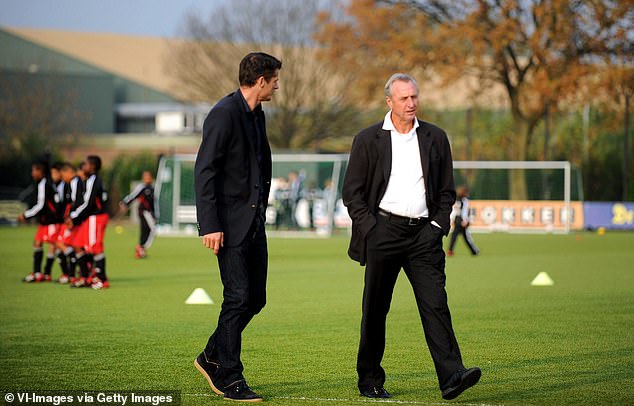 There were four core tenets to the Cruyff Plan:

Cruyff would present the plan to the Ajax hierarchy in early 2011 before returning to the board of advisors in June of that year.

Then the work behind the scenes began. Jonk became head of academy while Jongkind was the head of talent development.

They nabbed the manager of the kitchen from the Dutch Olympic training centre to improve nutrition. A school was built on site to help double the amount of hours players could train. The medical department was rebuilt, as were office spaces, all to show they would now be operating at a Champions League level. 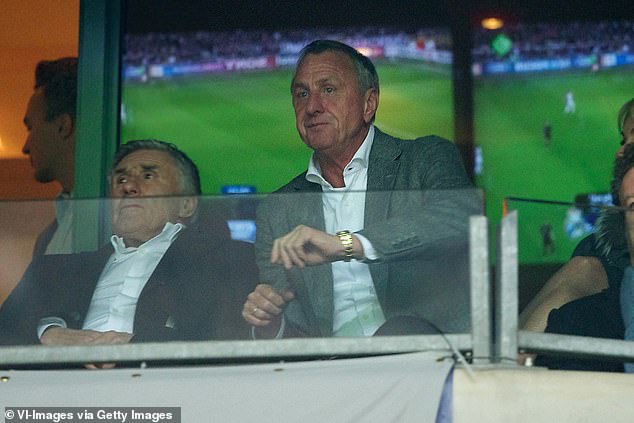 Cruyff wanted his sides to be homegrown, with a lot more emphasis placed on individuals 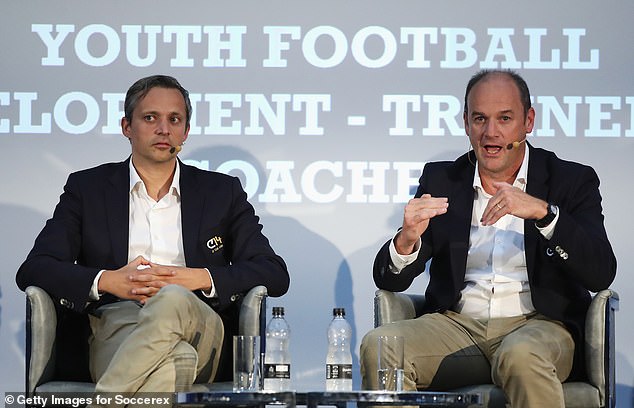 At academy level, they went from looking at results and each age group team to the individual. Cruyff said: ‘I’ve never seen a team make its debut’.

‘That is not how human development works. It is chaotic. It is non-linear.’

Decisions were made that were to the detriment of teams but the long-term benefit of players. Take Matthijs De Ligt – he would not be an £69million defender coveted by Barcelona without what is now known as Cruyff’s ‘velvet revolution’.

‘Matthijs was biologically mature at the age of 14,’ Jongkind says. ‘Normally the U15 coach would use him in every match. If you want to stop the strikers from scoring, Matthijs would be in your defence.

‘But that is not good for Matthijs. We had to move up him up two years to give him the right stimuli.

‘He would be a centre back in the future but he needed to be challenged over his speed of action. If you play a youth match and you are the best but you play centre back, you play too slowly.

‘We put him in midfield. He needed to play with 360 degrees around him and find solutions in small spaces. We knew when he played centre back later he would get into these situations.

‘Despite the fact he was very young his movement skills were not up to the level. He didn’t run well. Also his agility, stability and mobility had to improve. We worked hard on that with a specialised plan.’ 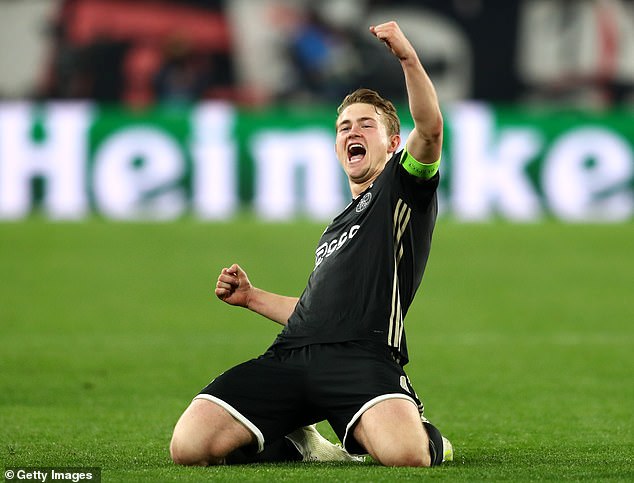 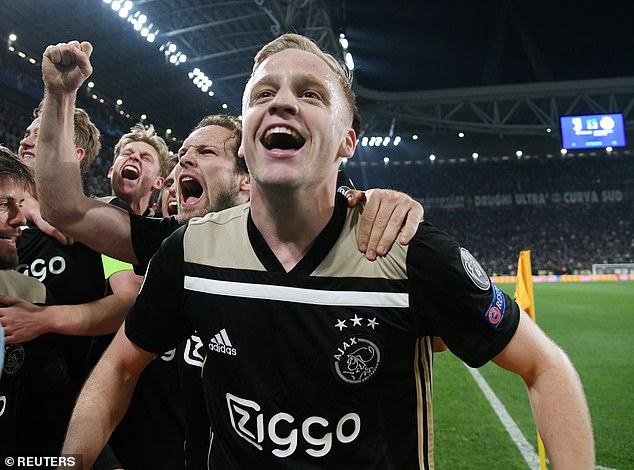 Bergkamp, meanwhile, spotted that Donny van de Beek was a natural phenomenon at 10

Ajax were so committed to their strategy they almost went to court against the Dutch FA to stop him from playing two Under 17 internationals rather than two Under 19 games for them.

He was not the only standout. The other goalscorer at Juventus, Donny van de Beek, was tipped for success by a great and then pushed towards it.

Jongkind says: ‘Bergkamp, he was the one who said when Donny was 10, “This is going to be a great player”. He said Donny needed extra individual attention.

‘His problem was he played too much to the back. We put him under a system of pretty rigorous physical training. He needed that.

‘He was benefitting from the performance department a lot. We got in people from American Football, from Judo, from pole vault. People ask, “Why pole vault?” and I always say “Because they raise the bar!”

‘He worked with them and then he started to excel at U19 when he was U16 because they were playing fantastic football.’ 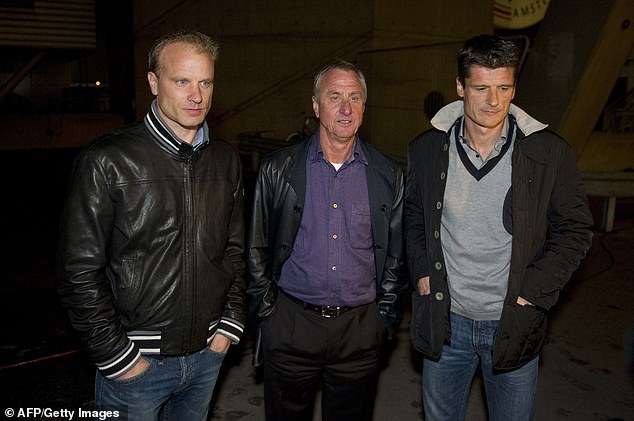 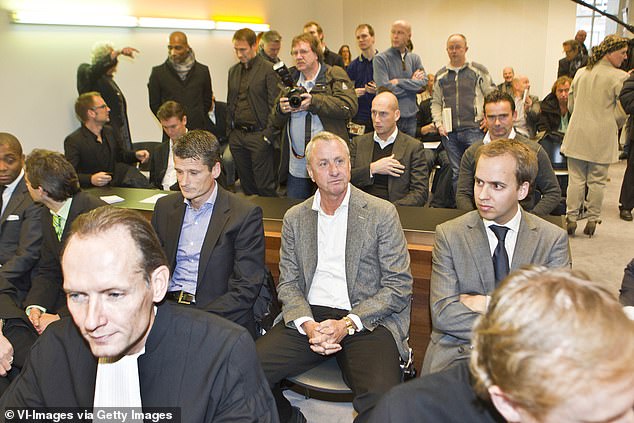 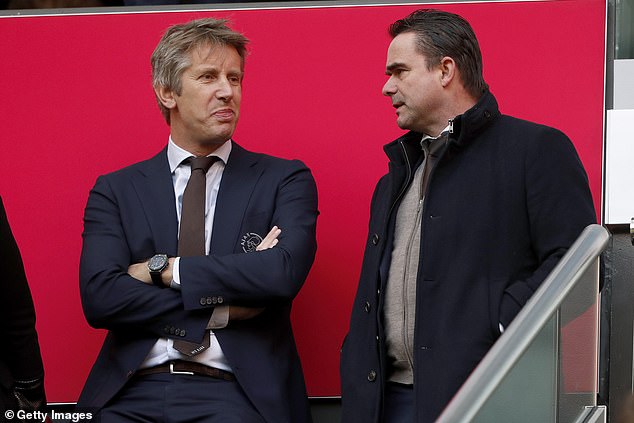 The fruits of Cruyff’s plan were not obvious at first and there were always issues. An attempt to hire Louis van Gaal as CEO in 2013 led to a courtroom battle which Cruyff and his supporters at the club won.

Edwin van der Sar had joined as marketing director in 2012 while Marc Overmars became director of football that year. They were initially Cruyffian members of the set up.

Cruyff stayed until 2015. Ajax tried to fire Jonk and as the plan was being abandoned, Cruyff quit and said: ‘The core of my vision within Ajax hasn’t been followed up. I increasingly got the feeling that this has been done deliberately, and I do not play games.’

‘There were a lot of people in the club who loved Johan but there were as many that hated him,’ Jongkind explains.

‘Eventually when he got the cancer (in October 2015), the people who hated him saw their chance and put a knife in his back.

‘I expected everybody who owed their position to leave, including Van der Sar and Overmars, but they stayed. He was really hurt by that in the last stages of his life.’ 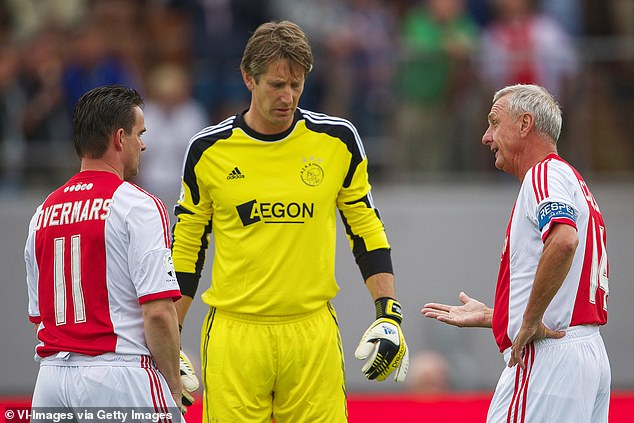 Cruyff eventually left in 2015, saddened that he couldn’t reap the rewards of his revolution 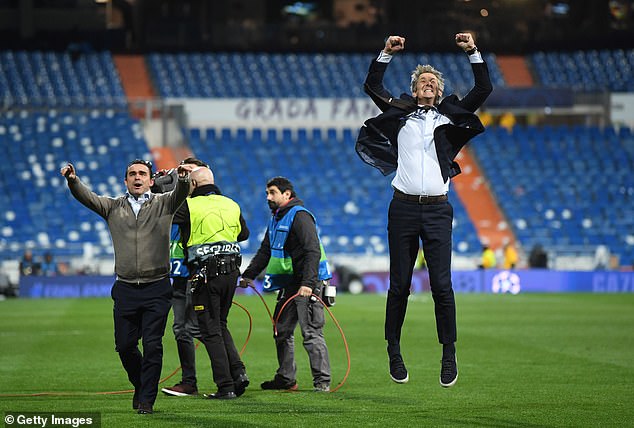 Cruyff would pass away just months after the betrayal. Those running the club, including Van der Sar and Overmars, are now reaping the rewards of the Cruyff Plan.

Ajax may reach the final, they may win the competition or they may not. But few would have predicted this as closely as Cruyff did.

During his time back at Ajax they put posters around the training ground claiming ‘We make Champions League winners’ – their mission statement. ‘Overmars and Van der Sar didn’t believe it,’ Jongkind adds.

‘Everywhere Johan went, five or 10 years later they were a success. Ajax as a player, Barcelona as a player, Feyenoord as a player. Ajax as a technical director in the 80s, they reaped the rewards with the team in the 90s.

‘Barcelona with Rijkaard and Guardiola. Then he came back to Ajax and you see now. But there was always a lot of jealousy and egocentrism. They didn’t like the power.’

Would he be proud of the fruits of his last labour? ‘I don’t think pride. I think he would first also look at the things that have to be done better. He would look at the academy and what is going wrong and what to do better again.

‘But he would also say this is what we thought would happen.’ 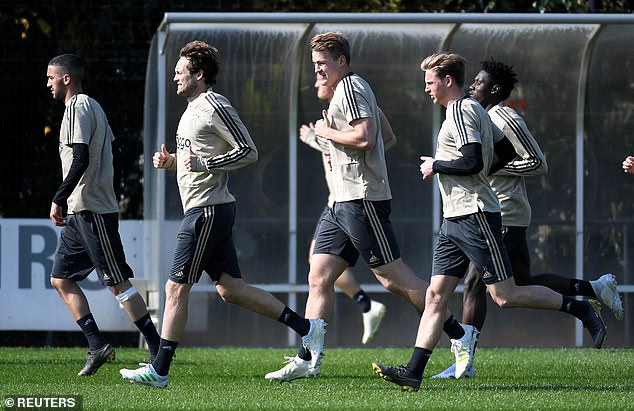 THE TALE OF ABDELHAK NOURI

It is, in Ruben Jongkind’s eyes, impossible to tell the tale of this Ajax side without mentioning Abdelhak Nouri.

Nouri was nine games into his senior Ajax career when he collapsed during a friendly match against Werder Bremen in summer 2017 due to cardiac arrhythmia.

He suffered severe and permanent brain damage and while he can now recognise and communicate with members of his family by moving his mouth and eyebrows, he will never be able to play football again.

Jonkgind says: ‘People never remember the biggest talent we have had in Ajax – Appie Nouri. He was considerably better, potentially, and at that moment than (Frenkie) De Jong and (Matthijs) De Ligt.

‘He was an incredible talent. Suppose he had still been playing…. Ho ho!

‘He played in the last days in senior football. He was playing in the Europa League campaign a little bit. He was still very small and needed to mature a little bit, but now at 21 he would be a great player with fantastic skills and fantastic creativity.

‘Appie could have been world class. It is such a shame.’ 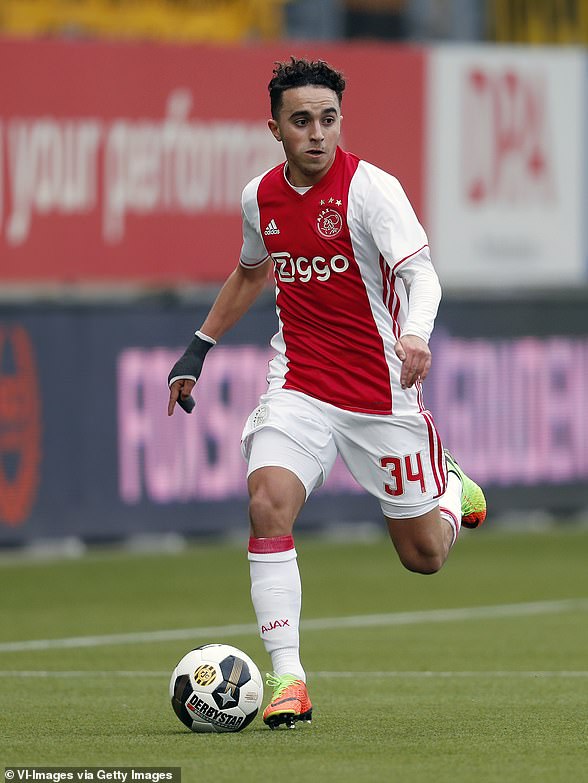