In an extra secure section of the Goulburn Supermax jail are 46 inmates, most of whom have been charged with terrorism offences.

The High Risk Management Corrections Centre is also known as the Jihadi Jail because of its high terrorist population.

The men are not allowed to interact with more than one inmate, and their only taste of freedom comes in walking laps around a small running track, A Current Affair reported.

Pictured: An inmates at Goulburn’s High Risk Management Centre holds up his index finger – an Islamic symbol referring to the ‘oneness of God’, but commonly used by Islamic State members and supporters

But Islamic inmates are still able to practice their religion, with halal meals and prayer mats allocated for the men, despite the warped religious views that landed most of them behind bars.

NSW Corrective Services Minister Peter Severin told the program: ‘Inmates are allowed to practice their faith, to engage in religious ceremonies – but that’s as far as it goes’.

Footage taken inside the prison shows prayer mats hanging over walls and inmates walking around in the yard in groups of two or alone. 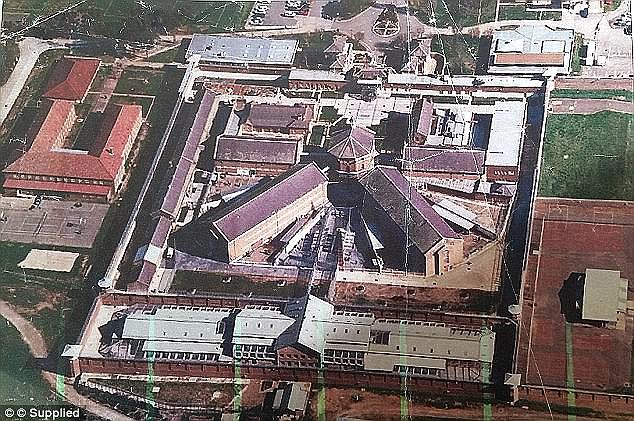 Goulburn’s Supermax jail is home to the High Risk Management Centre, where most inmates convicted of terror offences are held

As cameras pass by, one inmate, seen on the phone, holds up an index finger – the sign is used in Islam to denote the ‘oneness of God’, but has become widespread among supporters and members of Islamic State.

Inmates from other areas of the jail are seen gathering in groups at the heavy metal gates as cameras pass through the maximum security prison.

There are three wings in the High Risk Management Centre, Unit Nine, where convicted inmates are held, Unit Eight, where inmates awaiting sentence stay, and Unit Seven, which holds new inmates stay along with segregated prisoners.

In one wing, the median age of inmates is about 24.

WHO IS IN THE JIHADI JAIL?

NSW Corrective Services Minister David Elliot says the men are afforded few luxuries, but this is how it should be.

‘Probably the best part of their day would be walking around in a circle [on the running track],’ he told A Current Affair.

‘This is Supermax, they’re here to be punished. Most of them will die in here.’

While the High Risk Management Centre currently holds 46 inmates, the NSW Government has committed $47million over the next three years towards terror offenders and stopping radicalisation in public prisons. 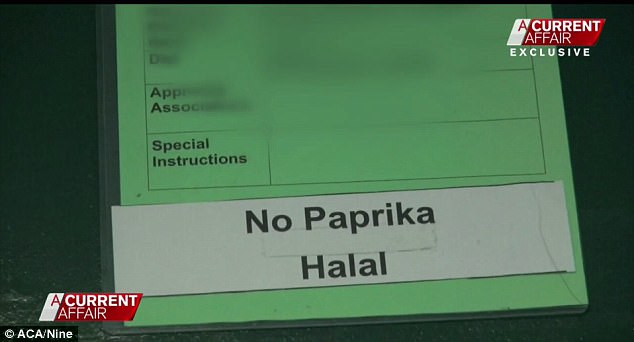 Despite their offences stemming from a warped view of their religion, the men inside the prison are still able to practice Islam 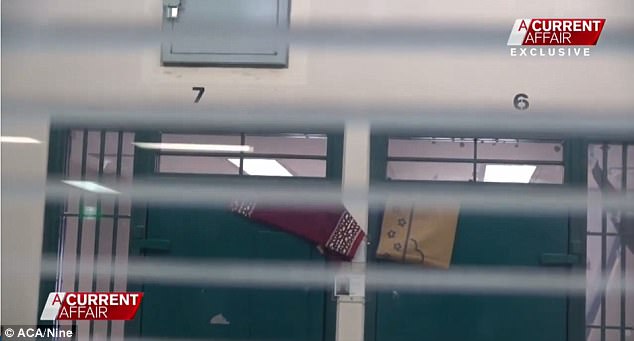 The complex is being redesigned to deal with the threat radicalised criminals bring to the prison system, and the new-and-improved prison will be able to hold double the amount of inmates.

A spokesperson from Corrective Services NSW previously told Daily Mail Australia the facility will: ‘Create an additional option to place and monitor high risk inmates who are deemed a threat to national security and who bring their extremist views and ideologies from the community into custody’.

Corrective Services do not believe radicalisation within the walls of NSW prisons is a huge threat, and say only five inmates have become radicalised in New South Wales prisons since they acquired their first terror-related inmates in 2009.