The Topshop heiress, 28, has put the three bedroom duplex apartment on the market with plans to move into her mum Tina and dad Phillip’s six bedroom, £10million home, alongside Jayden, 15 months – the son she shares with Jeremy.

Her current home boasts a host of stunning features, including a sprawling entertainment area, two floors, marble bathrooms and a south facing double balcony – with the sale coming after her alleged split from Jeremy, 35.

A vision: Chloe Green is selling her £7.5million Belgravia flat to ‘escape memories of her ex Jeremy Meeks’

Chloe’s mansion has appeared on an estate agents’ website with striking images showing the incredible flat which is said to be heaving with memories of her ‘ex’ Jeremy – something she is keen to escape.

The couple recently fueled rumours of a split after she was snapped on a yacht canoodling with sports star Rommy Gianni last month while Jeremy was spotted enjoying lunch with a mystery lady last week.

In light of the rumoured parting of ways, her stunning home has been put on the market ahead of her move into the lavish house owned and renovated by her billionaire parents.

Chloe’s current home is nothing short of sensational and will no doubt fly off the market thanks to its various stunning features including its prestigious location, bespoke kitchen and vast dining room. 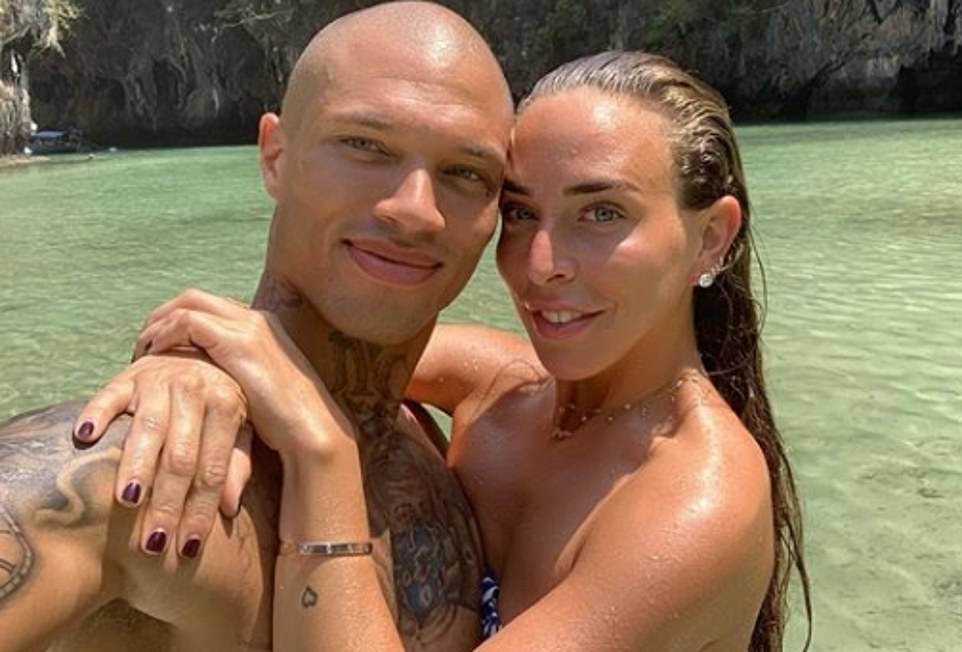 Shock: The Topshop heiress, 28, has put the lavish three bedroom duplex apartment on the market following her reported split from Jeremy, with whom she shares 15-month-old son Jayden (the couple, pictured in Thailand in April) 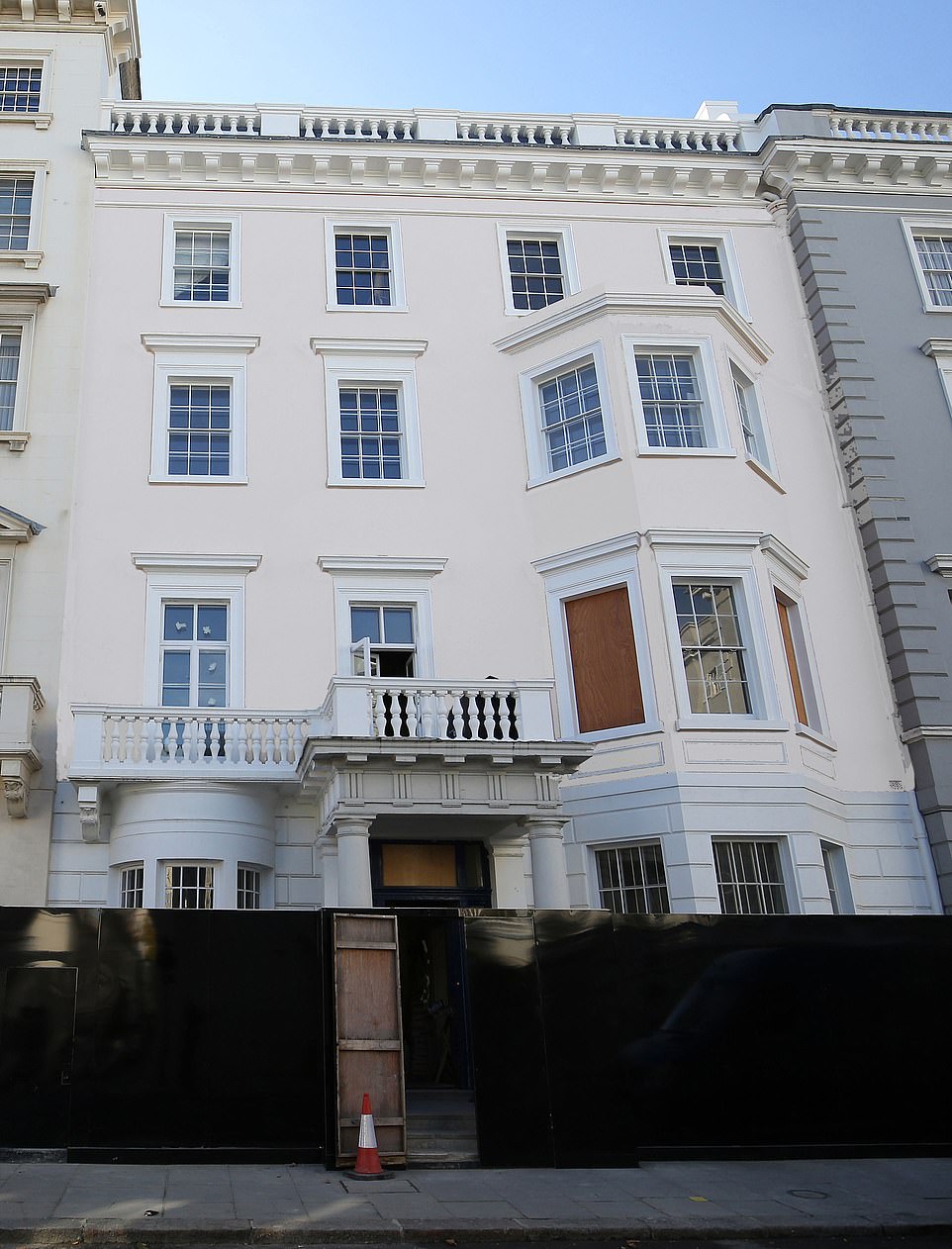 The big move: Since 2017, it has been reported that she plans to move into her mum Tina and dad Phillip’s £10million bedroom mansion, which Tina has been renovating ahead of the move (the house is pictured in 2016) 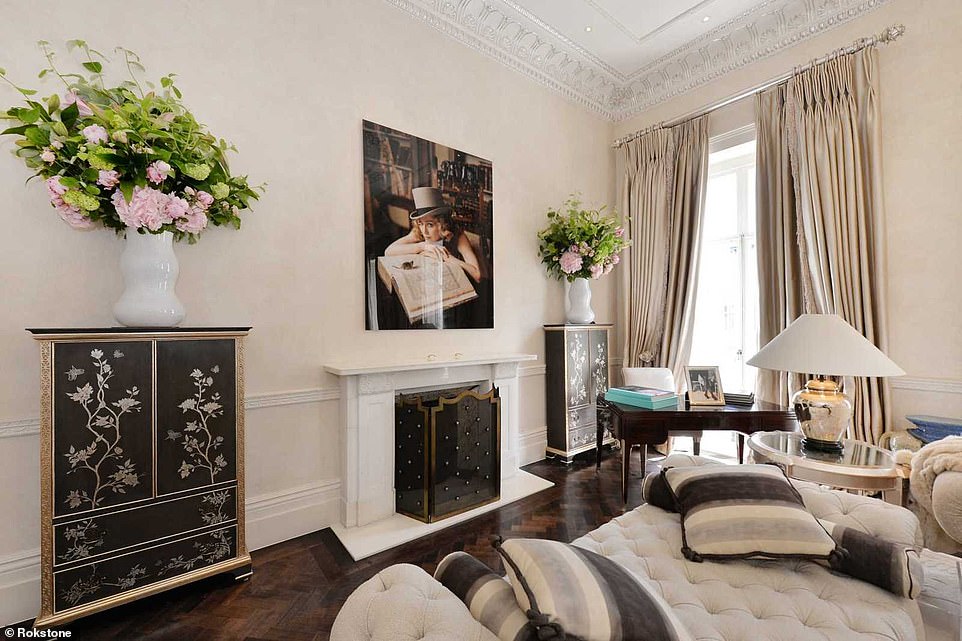 Stunning: Chloe’s current house is laden with a series of stunning features and has been listed for an eye-popping £7.5million 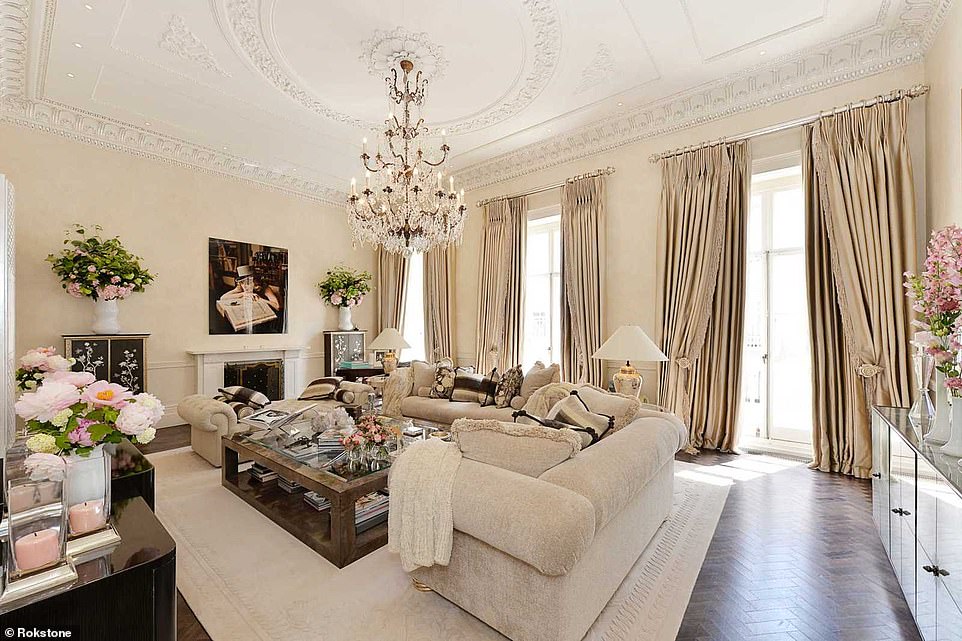 Stunning: In a rather unique touch, Chloe also had an image of Madonna on a wall in her living room

Chloe is clearly an art fan, as each room features statement images, with one of the most unique being a striking shot of a top hat-wearing Madonna leaning on an large book with a mouse looking up at her.

It was first reported in 2017 that Chloe was set to move in to her mum and embattled father’s pink mansion. 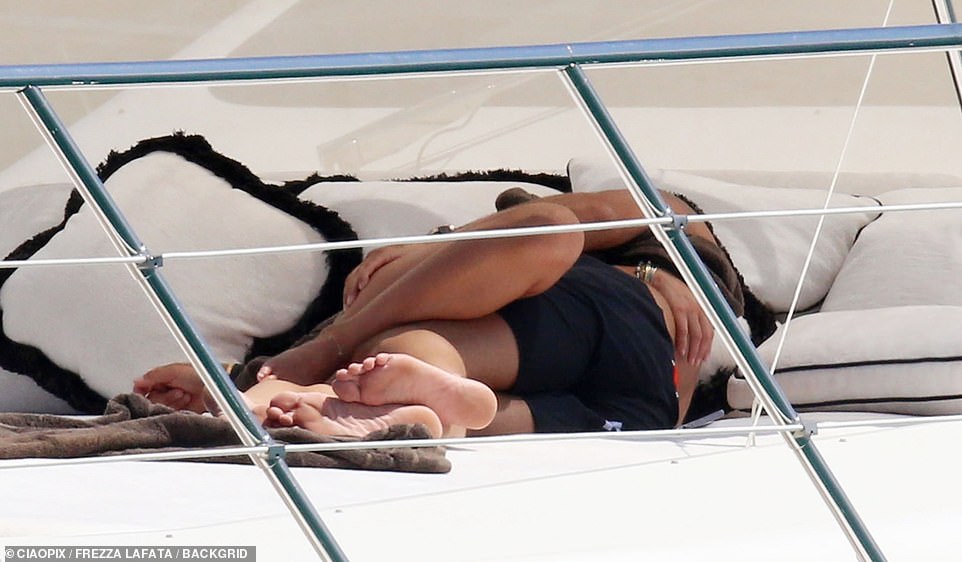 Romance? Last month, Chloe was spotted canoodling with sports star Rommy Gianni on a yacht in the Mediterranean (pictured during their steamy liaison) 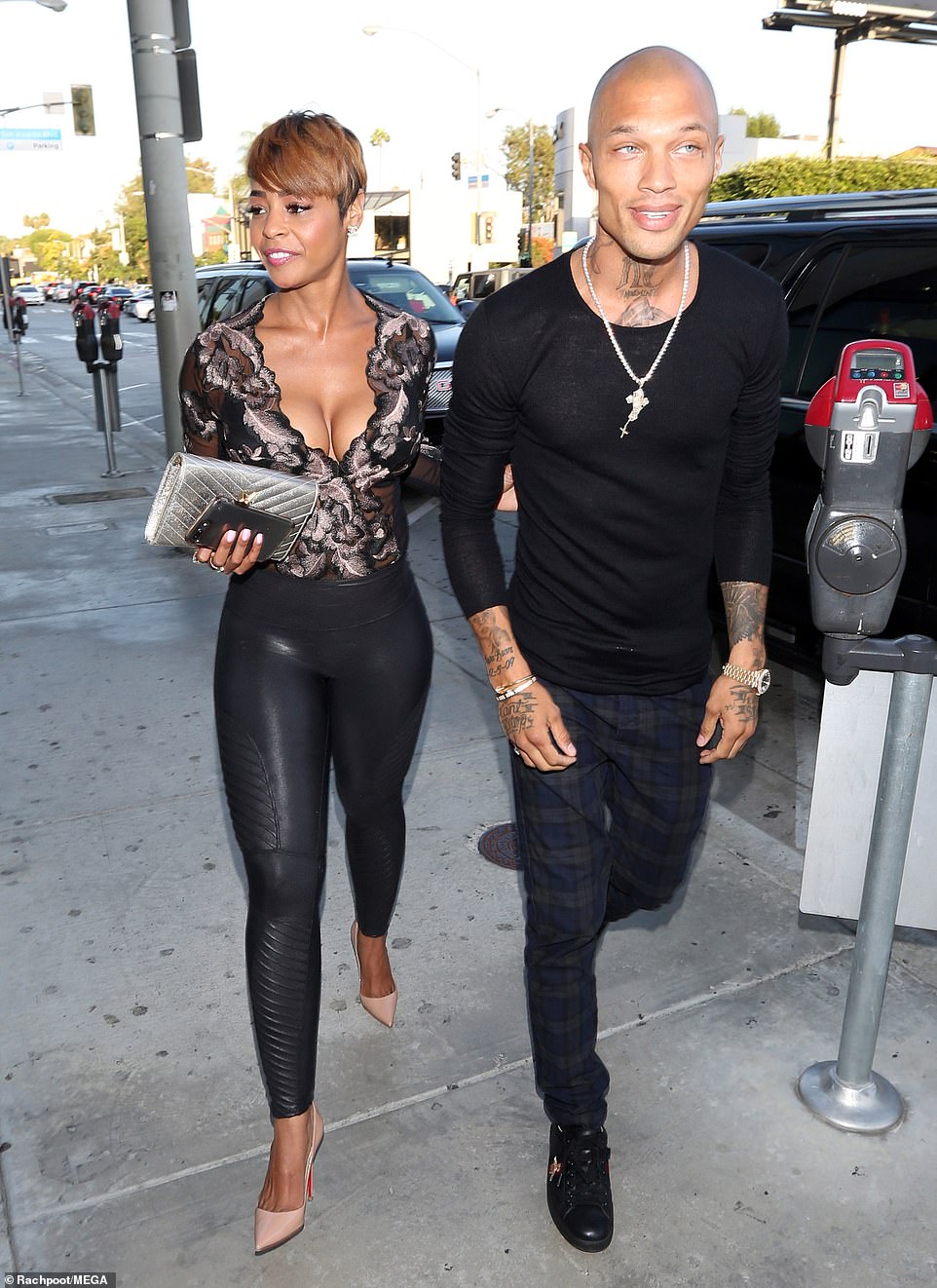 Just friends? last week, Jeremy was seen on a date with a mystery woman at LA’s Catch restaurant 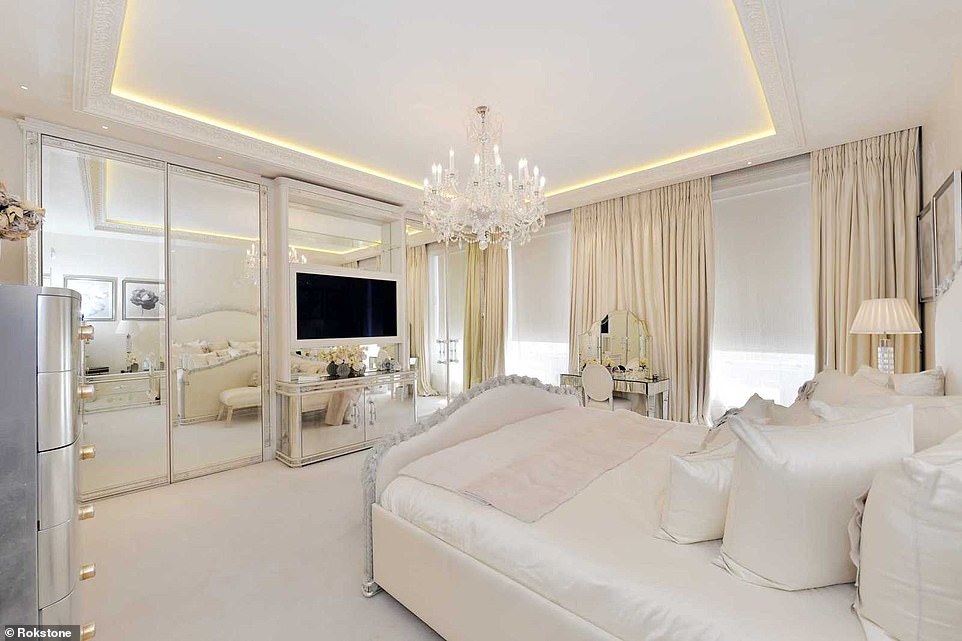 TV fan? Nearly every room in the house featured a television mounted on the walls and surrounded by mirrors 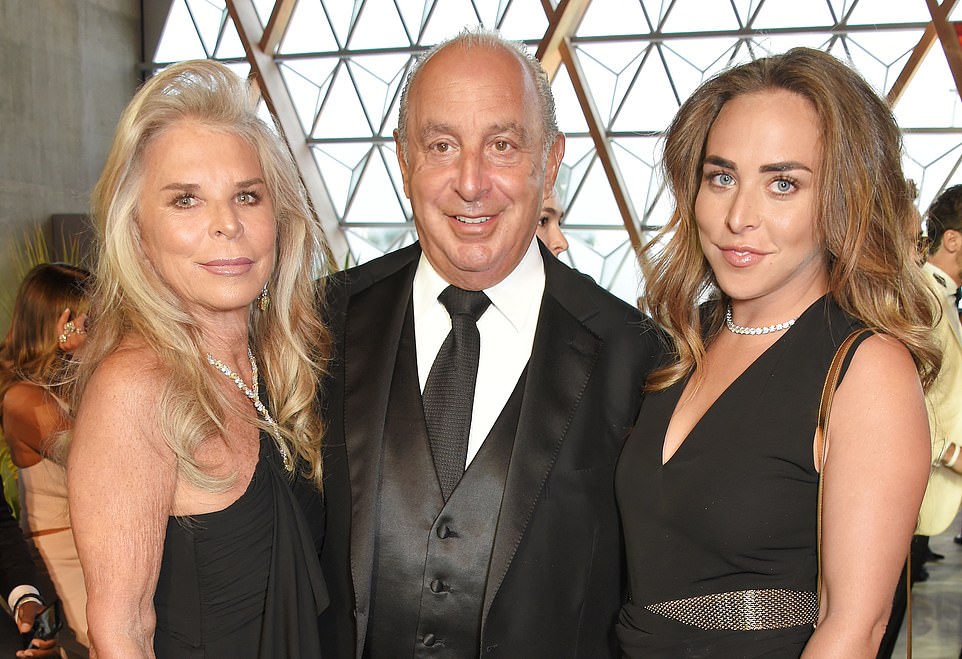 Lucky girl! It was first reported in 2017 that Chloe was set to move in to her father’s mansion which was renovated by her mother Tina Green – with the property always earmarked to be Chloe’s future home (pictured in 2017)

The Greens are said to have earmarked the property as Chloe’s future home upon purchase. In 2017, a friend told the Sunday People: ‘It is like a palace and is being done out in an incredibly high standard with no expense spared…

‘Chloe’s mum has been in charge of doing up the property and has visited it to keep a close eye on progress. The plan is for it to be handed to Chloe as her first proper house of her own, so Lady Tina wants everything perfect.’

Phillip has been hurtled into the spotlight over the past year due to a shocking list of grievances, including financial woes and allegations of sexual assault – which he strenuously denies. 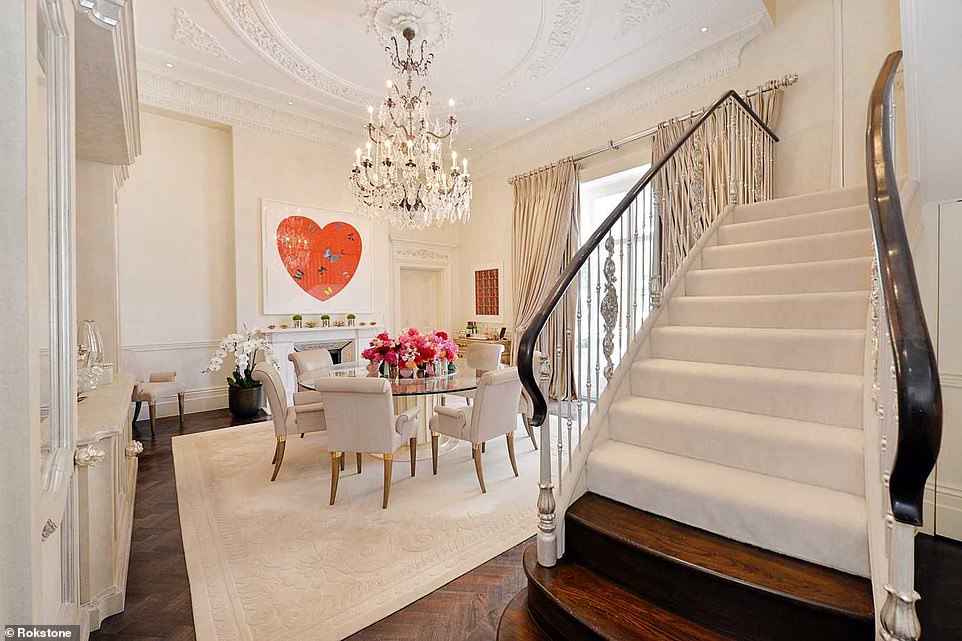 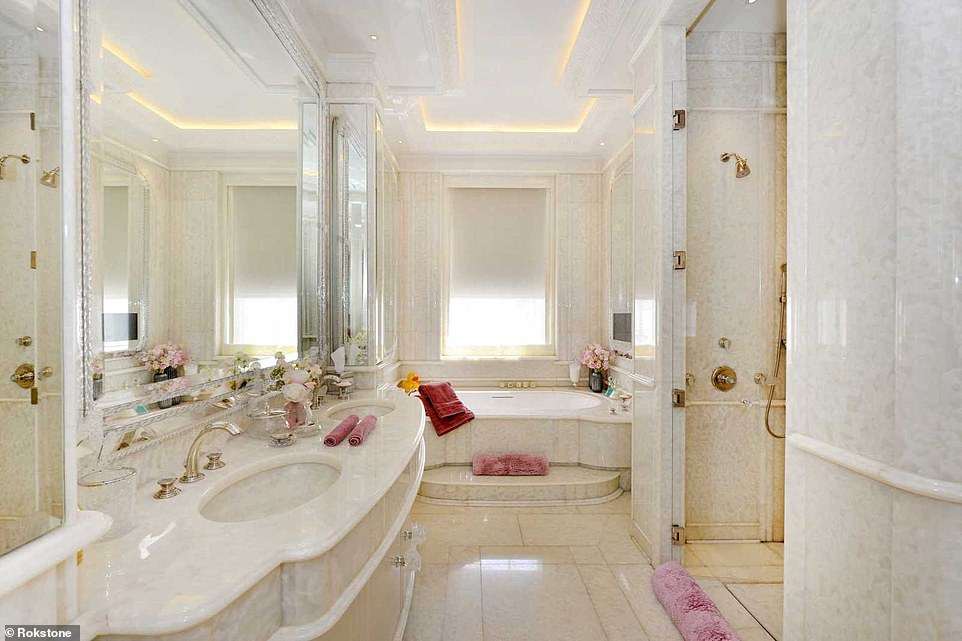 Wow! The designs were classic with muted shades yet she added her own accents with the pink adornments 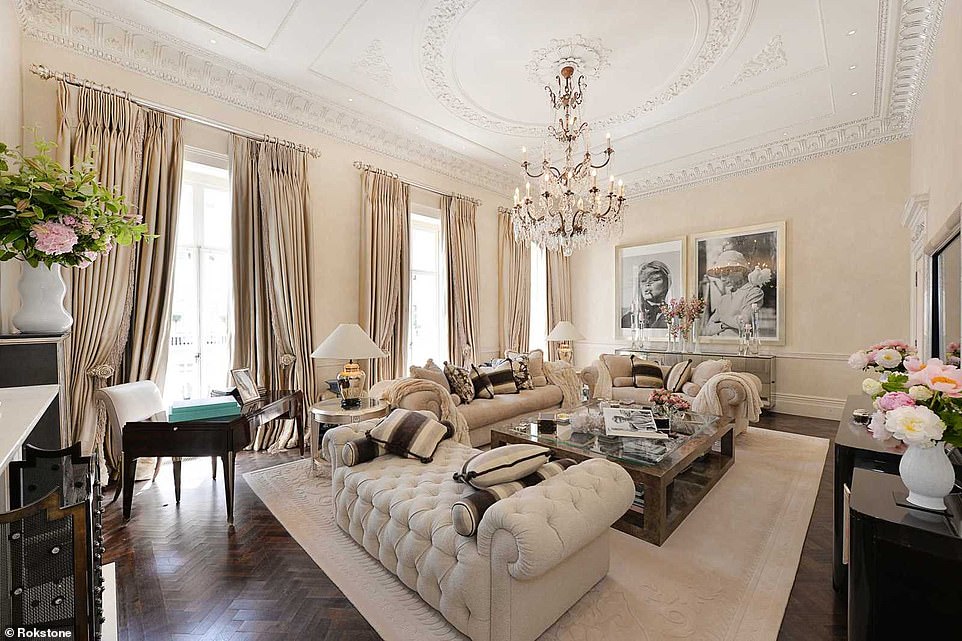 Wow! While Jeremy insisted that he had not split from Chloe, last month the Topshop heiress fueled rumors of a split when she was snapped on a yacht canoodling aports star Rommy Gianni

Arty! Nearly every room featured distinctive art, which stood out boldly against the predominately white interiors 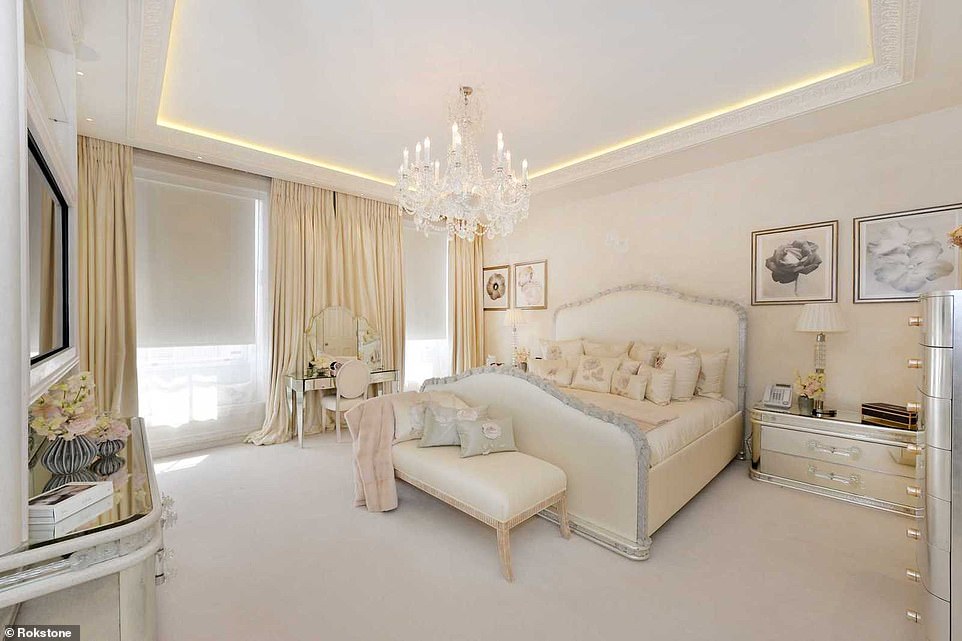 All white? She is clearly keen on white hues as most of the house features bright white and cream details

Jeremy rose to fame in 2014 when his mugshot, taken when he was arrested in a gang sweep in Stockton, went viral. He served 27-months on federal charges and was signed to a modeling contract when he was released.

Chloe’s recent vacation where she was cosying up to Rommy came after reports she split from Jeremy back in June, according to Us Weekly. ‘They split about two months ago, but are off and on still speaking,’ a source said.

They also claimed that Jeremy was ‘surprised’ by the photos of Chloe and Rommy.

The couple started dating in 2017 and welcomed Jayden Meeks-Green in May 2018. 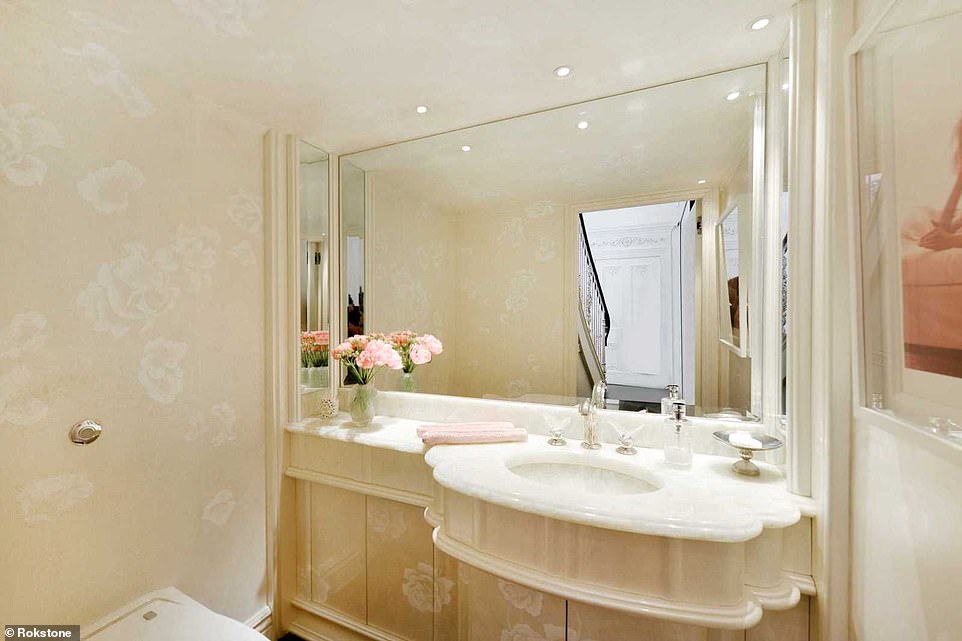 Pretty: The marble bathroom details sat alongside rose wallpaper and decorative roses on the sink 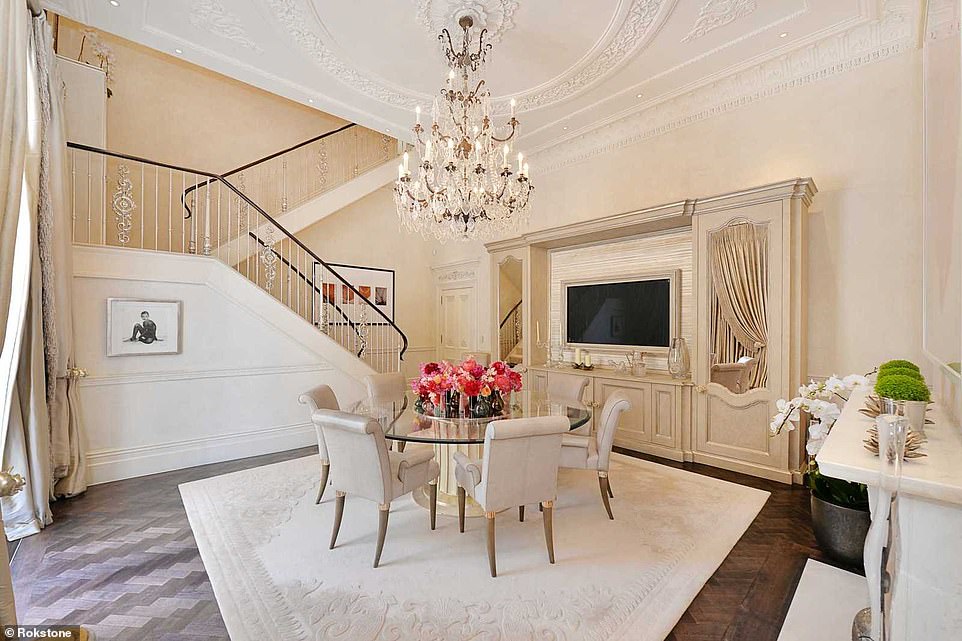 Sweeping stairs: The stunning living room sat in front of a television – implying they are fond of a TV dinner 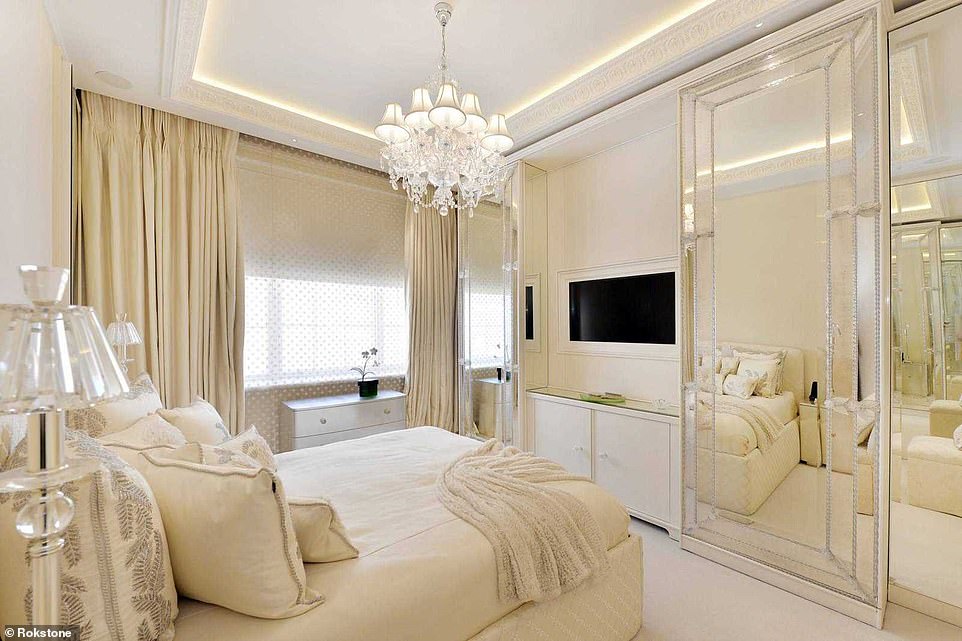 Airy: In light of keeping the spaces as sprawling and light as possible, she also added in mirrored wardrobes 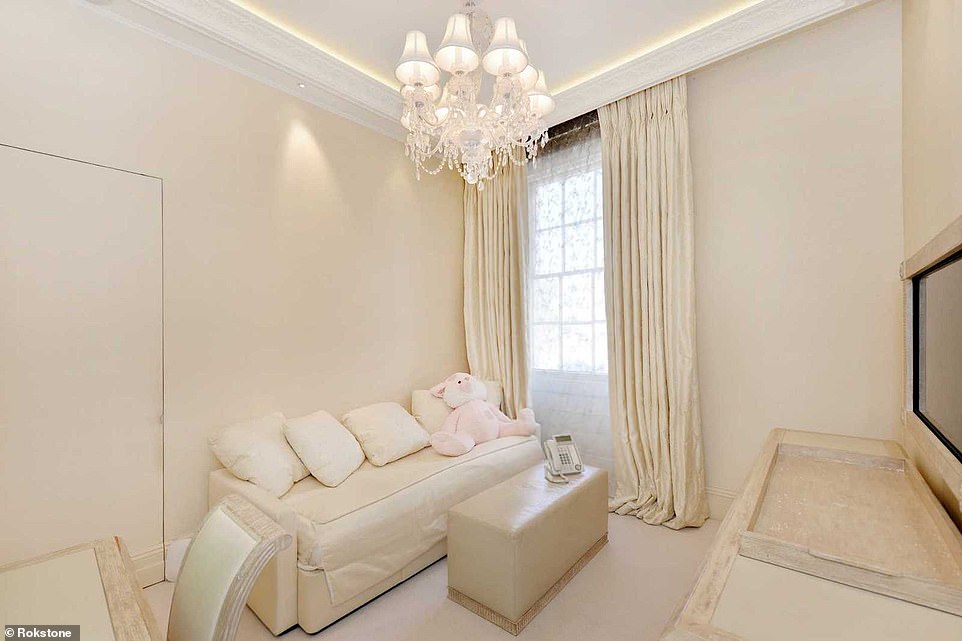 Sweet: One of the rooms gave a sense of little Jayden’s presence, with a teddy bear on one of the sofas 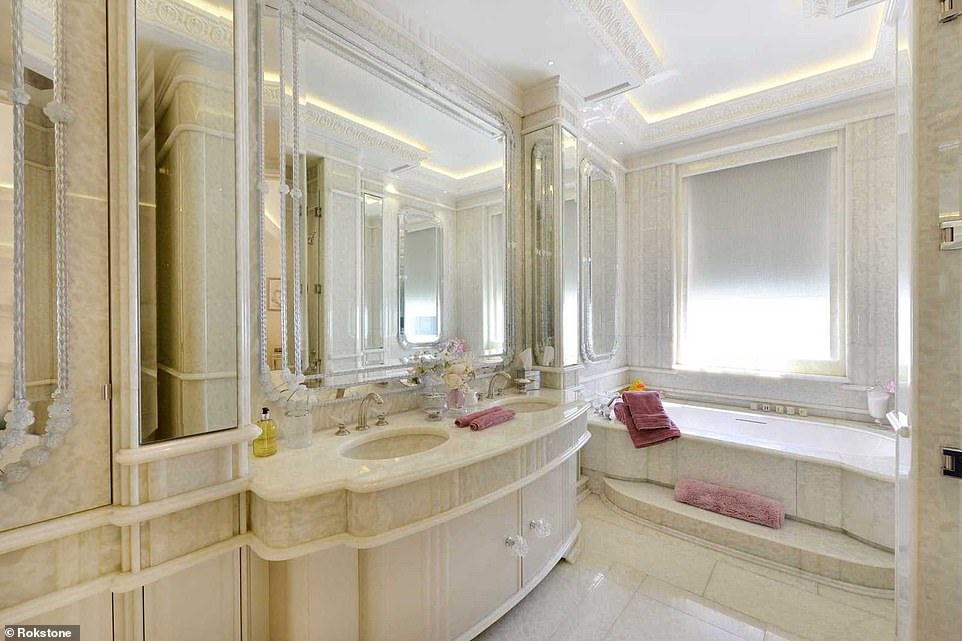 Marble mania! The main colour scheme throughout the home was clearly cream with pink accents