Do you get a decently stocked minibar when you book the Royal Penthouse, the finest suite at the Corinthia Hotel, just a step from London’s Trafalgar Square? Don’t be daft.

There’s nothing mini about the full-sized bar that comes as part of the package. It’s stocked with the finest cognac and champagne. Oh, and the suite also has its own wine cellar should you require a specific tipple.

The scale of the place becomes apparent when your personal butler points out the internal lift that whisks you between floors. Yes, floors, plural.

So how much bang do you get for your buck in a place like this? Well, for starters you get four bedrooms, a dining room that seats ten, an office where there are not one but three TV screens on the wall (hotel manager Thomas Kochs suggests guests who stay here like to keep up with the stock markets) and your own private spa.

The main bathroom has a bath the size of a plunge pool and the surfaces are fashioned from honey onyx and Skyros marble. And suffice to say none of the furnishings have been sourced in Ikea.

The team behind hit documentary series Inside Claridges, including award-winning filmmaker Jane Treays, have turned their cameras on London’s Corinthia hotel (pictured) 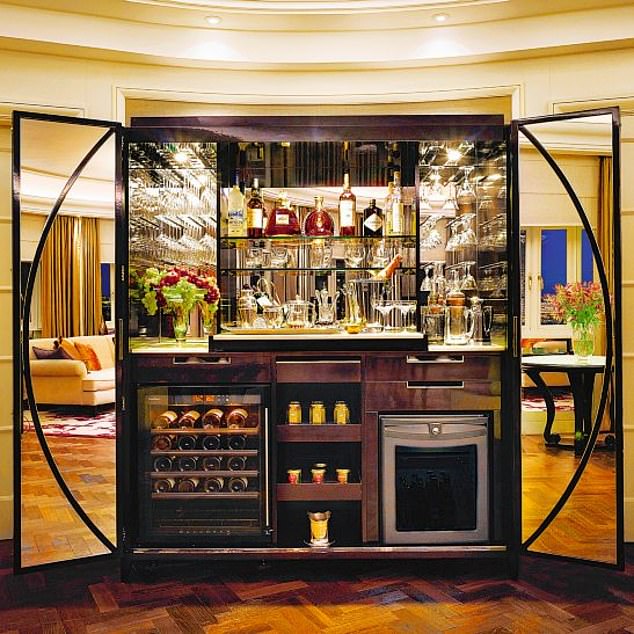 The Royal Penthouse, which costs £22,000 a night, comes with a full-sized bar (pictured) stocked with the finest cognac and champagne

Every piece in these rooms has been hand made. The dining table is Makassar ebony, the bed frames are walnut, and the expansive bookshelves are leather-lined. Oak parquet floors run throughout, and bouquets of fresh flowers are everywhere.

So, what does it cost to stay in a place like this? Well, this suite will set you back £22,000 a night. Blimey! Can anyone afford to stay more than one night? ‘One client stayed for six months,’ says Mr Kochs, deadpan.

It’s jaw-dropping to see such wealth close up. The Corinthia is the latest of the big London hotels to open its doors for the fly-on-the-wall documentary treatment.

Award-winning filmmaker Jane Treays, the woman behind the hugely successful series on Claridges (in which Mr Kochs, then the general manager at that hotel, became the break-out star) who has also made films on the Queen and the Duchess of Cornwall, was the obvious choice to direct the two-part production.

So did she get to stay in the Royal Penthouse for the duration of filming? Alas no. ‘I didn’t stay in the hotel at all,’ she says, ‘although we were there for filming a few times in the middle of the night. There is something quite lovely about that, when all is still.’

Still-ish. The silence in this hotel is regularly broken by the arrival of the room service trolley.

Who knew that guests here can order thousands of pounds worth of room service food at a time – and in the middle of the night? Middle Eastern guests like to eat during the night, we are told.

Some guests can’t find a thing they like even on the copious menu, and there’s an eyebrow-raising sequence where a celebrity guest (we are not told who) asks reception staff to arrange a takeaway from one of the capital’s leading restaurants.

No matter that the establishment doesn’t do takeaways – it does on this occasion, rather proving the adage that the guest is always right. 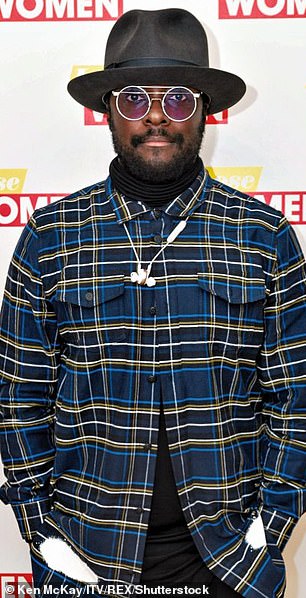 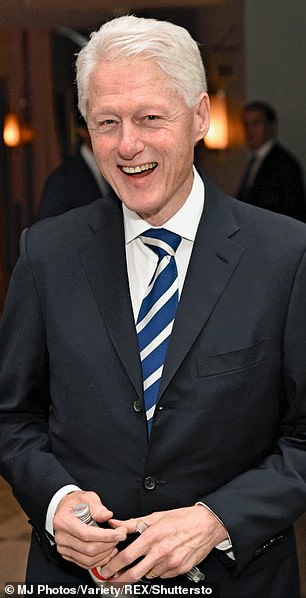 The hotel, which isn’t even the most expensive in London, has played host to the likes of Will.i.am and former president Bill Clinton 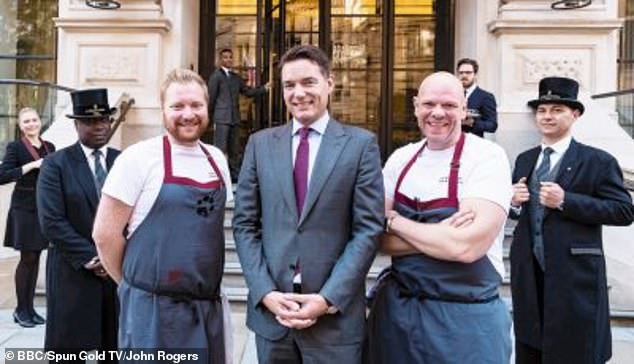 Managing Director Thomas Kochs, pictured centre with the hotel chefs, revealed that one guest stayed in a £22,000-a-night room for six months

This is an extraordinary programme, delivering not just the gawk factor, but offering an insight into London’s hotel wars, where the big high-end establishments compete to attract the monied guests coming to the capital in their droves.

‘London is one of the hotel capitals of the world,’ says Jane, ‘and the competition to attract guests is intense and relentless. They’re all upping their game, particularly when it comes to offering the big penthouses.’

She’s not kidding. The Royal Penthouse isn’t even the most expensive in London – that accolade goes to the Sterling Suite at the Langham Hotel, which costs an estimated £26,000 a night – and there is quite furious competition to be seen as the best.

‘I wanted to explore how a hotel like the Corinthia, which doesn’t have the years of tradition of somewhere like Claridges or The Ritz, can compete,’ says Jane. ‘It’s a modern hotel – and this is a modern dilemma about how to be relevant in a fast-changing industry.’

The Corinthia, open for just seven years (the premises used to belong to the Ministry of Defence), does compete, certainly on the celebrity guest front. One who arrives during filming is former US President Bill Clinton who, true to form, makes the housekeeping staff swoon a little.

President Clinton doesn’t allow the cameras to have a peek into his suite, but The Voice judge will.i.am does. The Corinthia is will.i.am’s home when he’s in London (this time he is booked in for ten weeks) but he’s picky about which suite he prefers.

The Royal Penthouse is (mercifully for his accountant, perhaps) ‘too big for me’, he explains. ‘If Beyoncé was here, she’d be in the Royal Penthouse.’ His favourite is the Musician’s Penthouse, which has a grand piano.

The actor Cuba Gooding Jr is another long-term guest. He’s been staying at the Corinthia during a stint on stage in the West End, and admits to conflicted feelings about hotels.

He tells the story of when his mum and dad split up, he had to flit from hotel to hotel, and made a vow to himself that when he was a grown-up, he would never ever stay in another hotel. ‘And I’m back in these damn hotels,’ he grins. ‘But they are so much nicer.’ 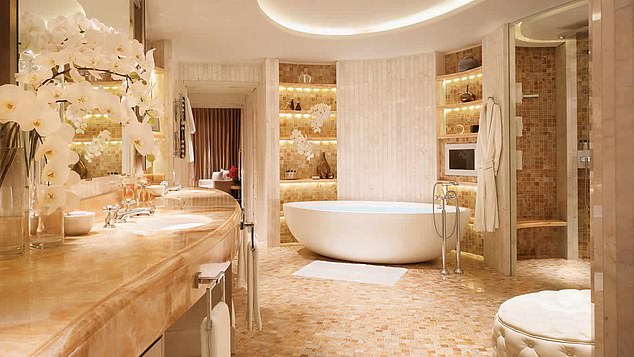 While the famous faces give this documentary the glamour factor, it’s the staff who give it its heart. There are 500 people employed in the hotel, from 54 countries.

‘What struck me was the pride they take in their work,’ says Jane. ‘In the UK we can be sniffy about the service industry. That baffles them.’

It is extraordinarily touching to hear how Yvette, who came to the UK from Bulgaria, regards her work. Her first job in this country was as a strawberry picker, then she started as a room attendant at the Corinthia, and has since been promoted to first floor supervisor.

Yvette is a documentary-maker’s delight, complaining that her smart grey uniform makes her look like her grandmother, and explaining that she regards the rooms she is in charge of as her daughters. When a guest leaves a room in a state she thinks of it in terms of her ‘little one being a teenager’.

Among the local staff is Kevin, a lawyer who takes three afternoons off work each week to play the piano for guests enjoying afternoon tea. Actually, afternoon tea is one of the most pressing issues at the hotel.

While the cameras are furiously filming as new resident chef Tom Kerridge settles in – another big signing, aimed at attracting the celebrity clientele – they are also in evidence at the meetings held to discuss the new afternoon tea menu.

Afternoon teas, it seems, are another battleground in the London hotel wars, with the big establishments vying for that particular market. Cue an overhaul here, with some very, very protracted meetings about sandwiches.

Jane laughs. ‘I asked what there was to discuss about sandwiches, and was told ‘a lot’. There’s the softness of the bread, the ratio of filling to bread, how traditional the filling needs to be.

‘I think it shows the extraordinary attention to detail that goes into running a hotel like this,’ she says. ‘Nothing is left to chance.’

Even the tea selection borders on the obscene. Guests can choose from 26 varieties, the leaves are weighed out on antique scales and the teacups… well, they’re gold-plated. Naturally.

A Hotel For The Super Rich & Famous, Thursday, 8pm, BBC1.