She’s spoken proudly about how she’s happily shunned the limelight in favour of taking on a more traditional ‘housewife’ role, cooking and baking for her children and husband.

And with a home as lavish as the extensive country estate outside Banbury, Oxfordshire that Geri Horner shares with Team Principal of the Red Bull Racing Formula One team, Christian Horner, it’s no wonder the former Spice Girl is eager to spend most of her days there.

Geri, 45, regularly gives her 512,000 Instagram followers glimpses into her new life as a domestic goddess, showing that the kitchen where she whips up cakes using a customised Ginger Spice KitchenAid mixer, is most definitely the heart of her home.

Of course, no country kitchen would be complete without the obligatory AGA range, although keen cook Geri has an additional oven to ensure her production line of bread, cakes and cookies keeps ticking along.

To entertain her daughter Bluebell, 11, and their son Monty, who turns one in January, there’s a retro jukebox worth more than £16,000 and stables to house the family’s miniature donkeys.

Geri Horner, 45, with her miniature donkeys at the stables in the grounds of the sprawling Oxfordshire estate she shares with her husband, motorsport boss Christian Horner 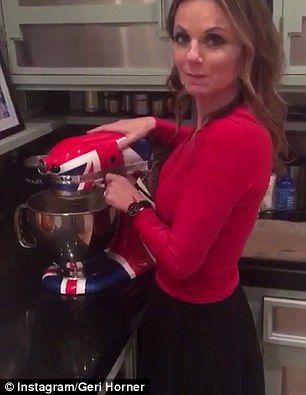 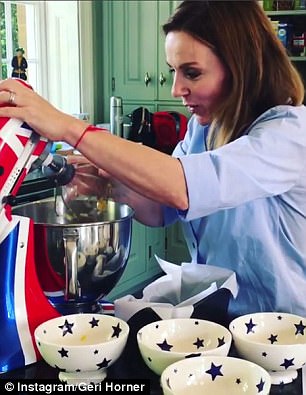 The country-style kitchen is very much the heart of the home, with Geri sharing regular snaps of herself preparing family meals and treats such as jam, lemon pound cake and millionaire’s shortbread.

Her Union Jack KitchenAid is definitely the most popular gadget she has to hand, after her husband Christian had it customised to look like her iconic Union Jack dress at the Red Bull paint garage.

Meanwhil an AGA and an additional oven ensure the family never goes hungry. 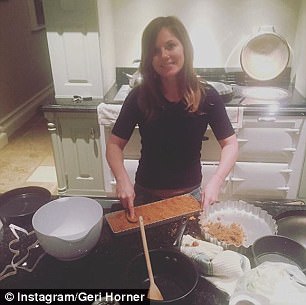 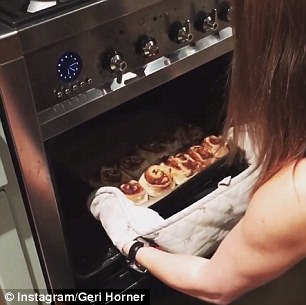 Naturally, the keen cook has the obligatory AGA range (left) as well as an additional oven so that her baking production line keeps ticking over 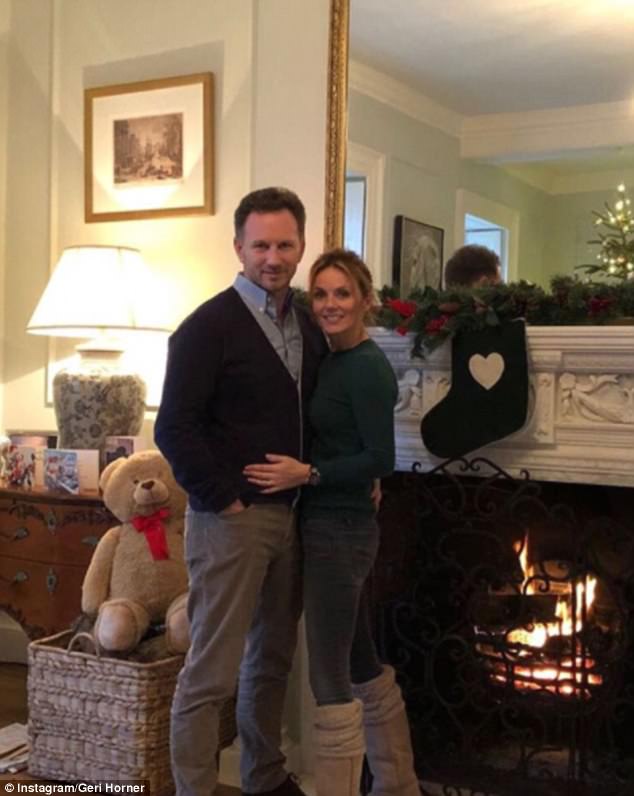 In one of the living areas, an opulent marble fireplace, an antique chest of drawers, a gold framed mirror, a crystal chandelier and a blue and white floral vase lamp show the family’s love of luxury decor

The family have a wealth of reception rooms to choose from, but the family room complete with a vintage Wurlitzer jukebox is bound to be a favourite.

Former Spice Girl Geri shared a video showing her dancing to Billie Jean with Bluebell on her 45th birthday, thanking Christian for the music.

An original Wurlitzer can cost almost £16,000 although it’s unlikely to have made much of a dent in Christian’s estimated £5.9million net worth.

Another more formal living space with a crystal chandelier and grey velvet sofa centres around an opulent marble fireplace.

A blue and white floral vase lamp perched on an antique chest of drawers and a huge gold framed mirror above the mantlepiece reveals the family’s love of luxury.

But elsewhere, in a more relaxed corner of the house, Geri loves to recline on a worn sofa with the dogs and do a spot of knitting. 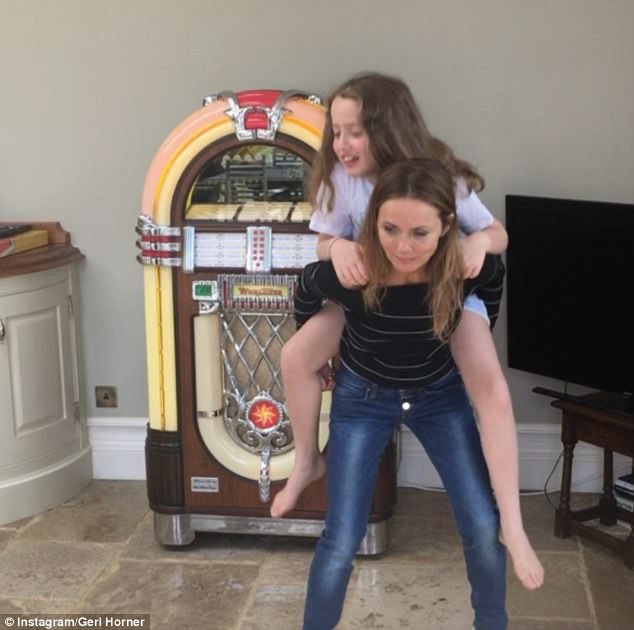 Geri received a vintage Wurlitzer jukebox from Christian for her 45th birthday, which could have cost up to £17,000 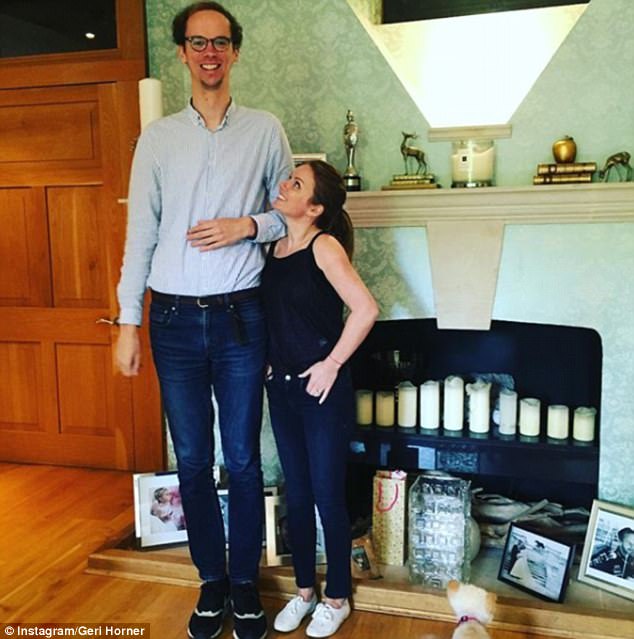 The former Spice Girl’s home is liberally decorated with family photos, while one of her Brit awards and deer bookends provide a quirky touch 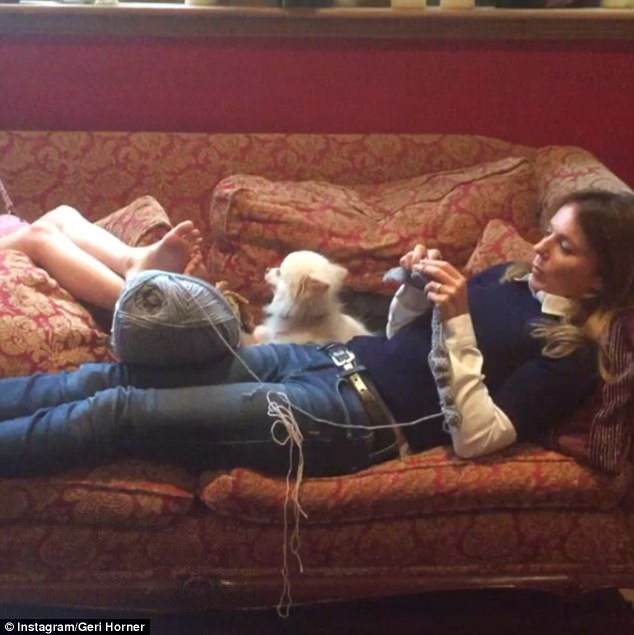 In another more relaxed corner of the home, the mother-of-two can relcine on a worn sofa to indulge in her love of knitting

When she’s feeling inspired, Geri can tinkle the ivories on a grand piano.

Or she can relax on one of the sprawling cream couches in a room decorated with olive green damask wallpaper to strum her guitar.

In the same room, the hearth has been replace by a shelf of white candles while antique trinkets such as a golden apple and deer bookends adorn the mantlepiece.

The Spice Girls star also keeps one of her Brit Awards and a loved-up photo of her and Christian atop the piano for inspiration. 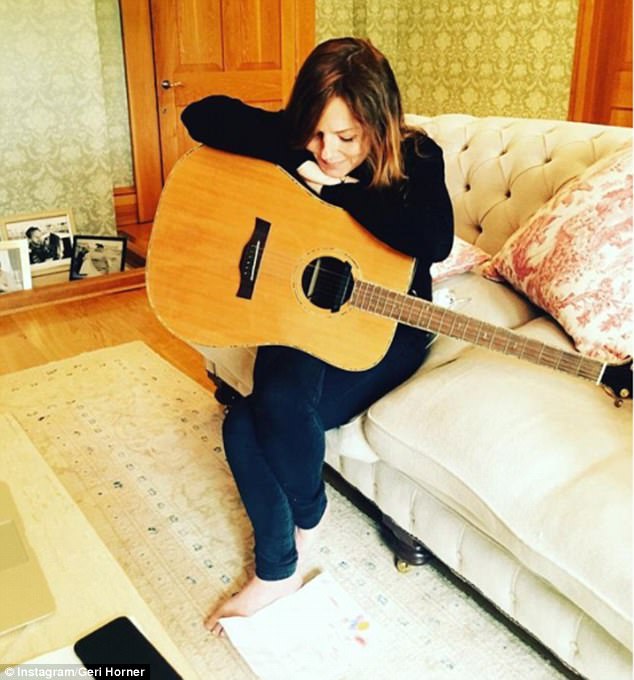 In the relaxing surroundings of a reception room with olive green damask wallpaper and a luxurious white sofa, the singer can take some time out to write new music 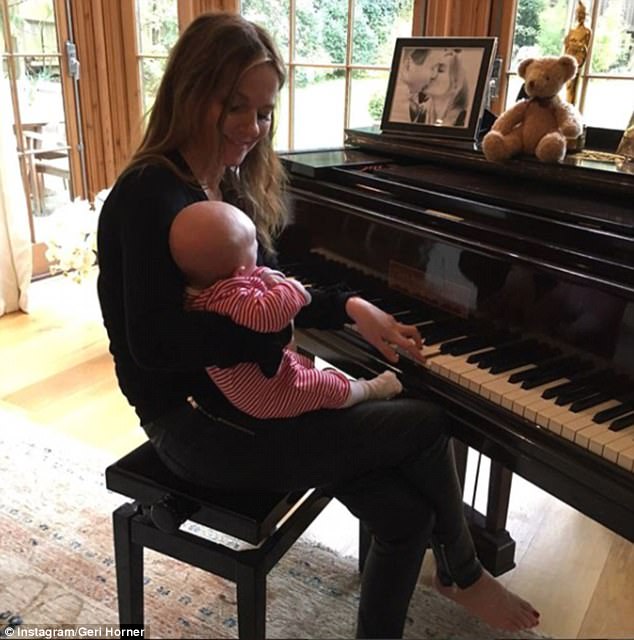 Starting earlier! Geri tinkling the ivories on the grand piano with her son Monty, who turns one in January

The sprawling grounds afford plenty of opportunity for walks with the family dogs, or a spot of boating on the duck pond.

If she’s in a hurry, Geri can zoom around with ease on a quad bike.

The singer seems particularly fond of the family’s miniature donkeys who are housed in stables within the grounds and even invited This Morning presenter Rylan Clark Neal to film with them on a visit to her home. 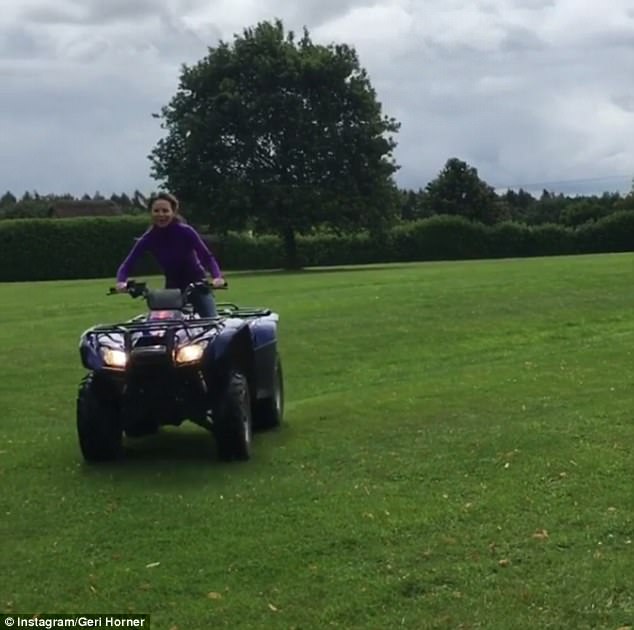 That’s one way to get around! You know you’re winning at life when your garden is big enough to require a quad bike 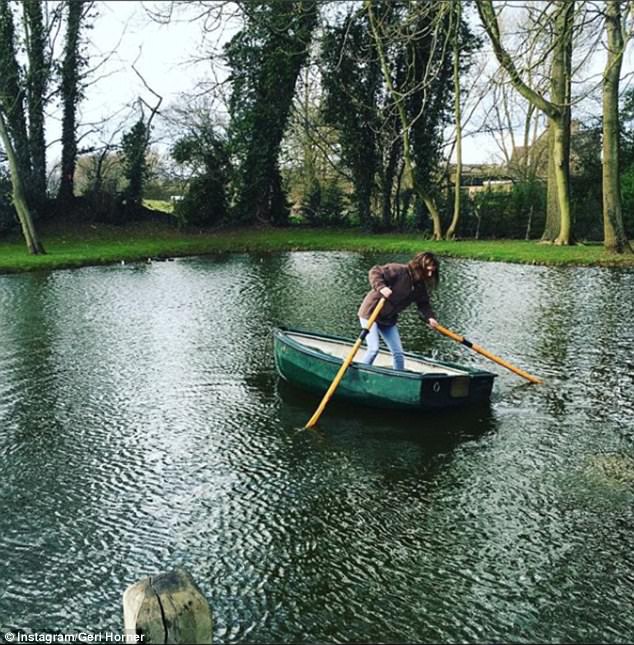 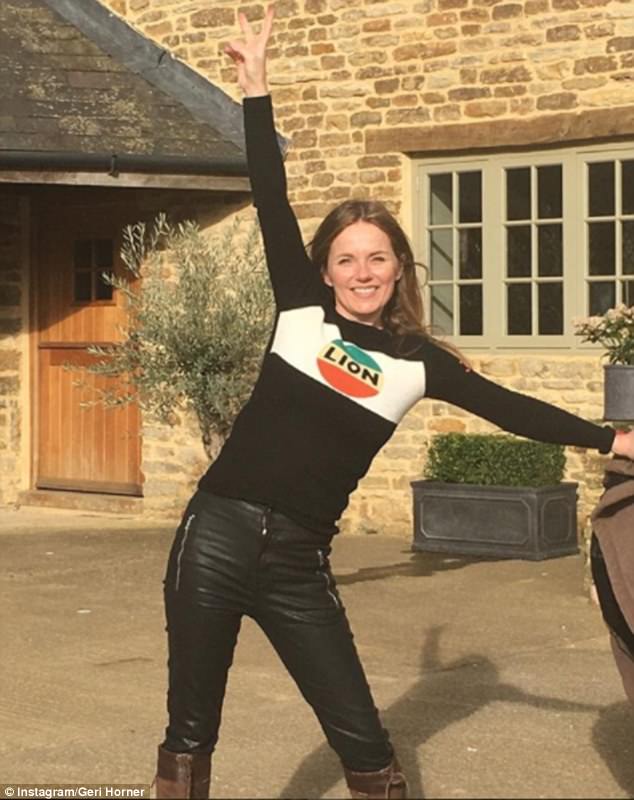