In the gripping Netflix drama Unorthodox a terrified young woman flees a community of controlling Hasidic Jews and an unhappy marriage.

It’s difficult to believe that the story, in which heroine Etsy is unable to work, forbidden from playing music and forced into painful sex with her husband, is based on a true story of a woman who lived in modern-day Williamsburg, in New York.

But not many of the show’s Australian fans will be aware a similar ultra-orthodox sect also exists in four square blocks in southeast Melbourne.

Many of the 200 families that make up the Adass community do not have a TV or the internet and arranged marriages are the norm.

The community has been in the spotlight since three sisters who attended the Adass Israel Girls School moved one step closer to justice.

Sisters Elly Sapper, Dassi Erlich, and Nicole Meyer were allegedly molested by their headmistress Malka Leifer 12 years ago while they were at school.

Malka Leifer ran the Adass Israel School in Melbourne where she allegedly sexually exploited at least eight girls between 2001 and 2008. She may finally be extradited back to Australia 12 years after fleeing to Israel 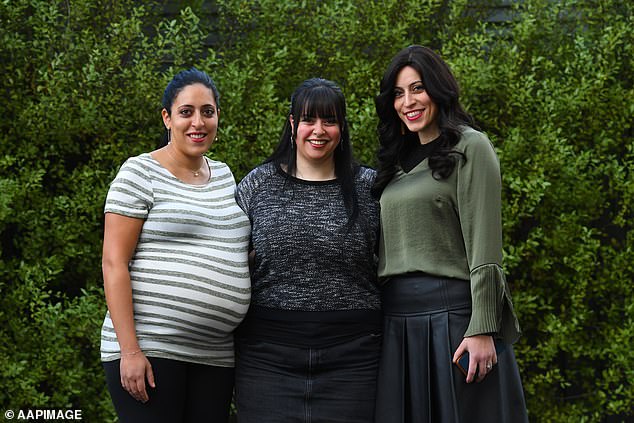 Sisters Elly Sapir, Dassi Erlich and Nicole Meyer are alleged victims who have in recent years spoken out and tirelessly lobbied for Leifer to stand trial

Leifer fled to Israel when she was accused of abusing at least eight girls between 2001 and 2008.

The former principal has spent the past six years fighting extradition on 74 child sex charges and the three sisters have tirelessly lobbied for the alleged abuser to stand trial.

Finally after 67 hearings where Leifer’s lawyers insisted she was mentally ill, a panel of doctors on Tuesday ruled she faked it and was ‘fit to face justice’.

Leifer’s alleged victims said she was charming and told them what they needed to hear to feel loved and appreciated in an otherwise unforgiving society.

Her actions were so unquestioned she could get away with taking a student into her office, with the blinds drawn, to allegedly abuse them.

Ms Meyer was allegedly the first to be abused, starting in Leifer’s office when she was 17. 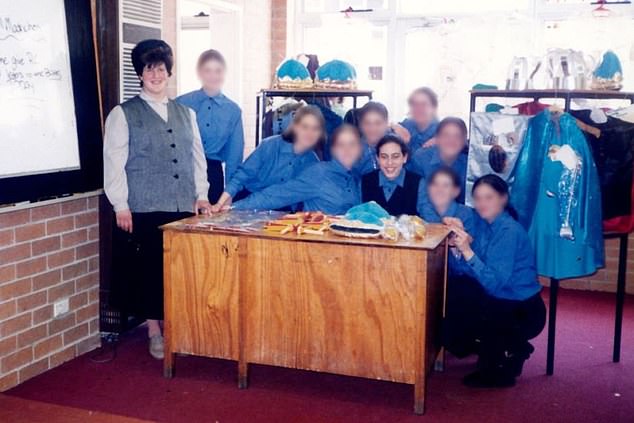 She had no idea her younger sister, Ms Erlich, was allegedly being abused at the same time, in a similar fashion.

It was not until 2005 when Ms Meyer has graduated and been quickly appointed a teacher that the two sisters realised the same thing was happening to them both.

They tried to covertly warn their younger sister, Ms Sapper, but she was jealous of the attention Leifer heaped on her sisters and wanted it too.

But she admitted she was too caught up in her own world and needing love and attention to heed their warnings.

‘This is good for you. This is going to be good for you when you get married. What I’m doing is helping you and I’m giving you love,’ Leifer allegedly told her.

Leifer’s alleged abuse was only uncovered when Ms Erlich told a psychologist about it when she was seeking post-natal depression counselling.

She had moved to Israel so her husband could continue his religious education, as is procedure for many in the Adass community. 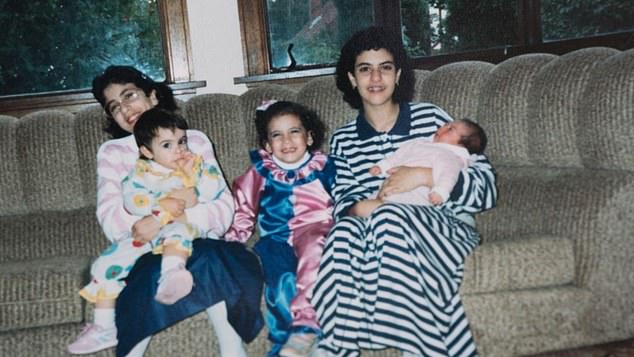 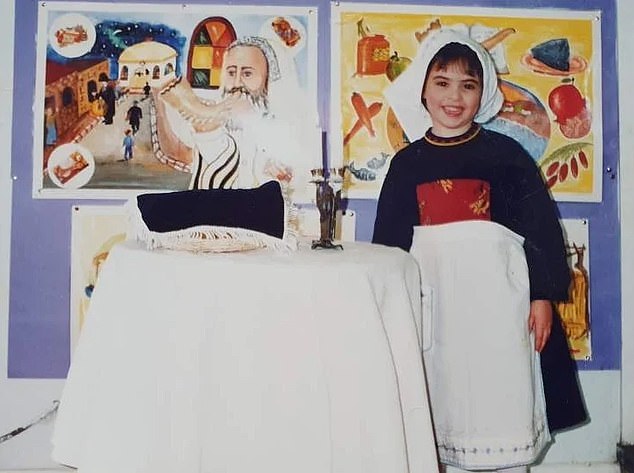 Ms Erlich as a young girl when she attended the school in southeast Melbourne, but before she was allegedly abused by her high school principal

She was having recurrent nightmares and anxiety stemming from her alleged abuse at the hands of Leifer and the psychologist contacted a colleague in Melbourne.

The Melbourne psychologist passed the basic allegations on to a senior teacher they knew at the school – her sister Ms Meyer – who confronted Leifer.

A meeting of the school board was convened to discuss the allegations after they were reported to the president of the school, and senior community rabbis.

‘You have destroyed my reputation. I’m not going to stand for this,’ Leifer told them while denying the allegations.

That evening, Leifer was booked on a plane to Israel with her husband Rabbi Yaakov Yosef Leifer and four of their eight children by the wife of a school board member. 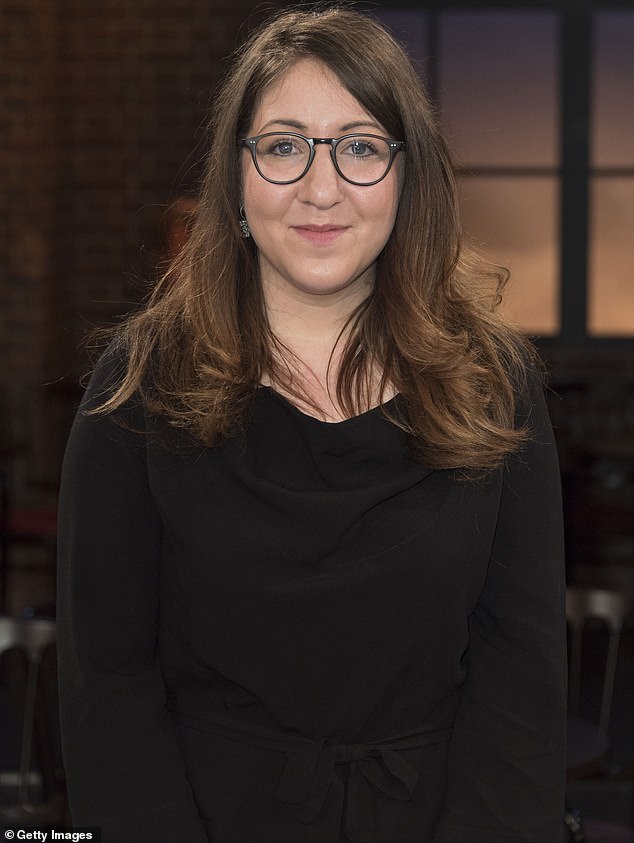 Adass is startlingly similar to the Satmar community in Williamsburg, Brooklyn, where Deborah Feldman (pictured) grew up 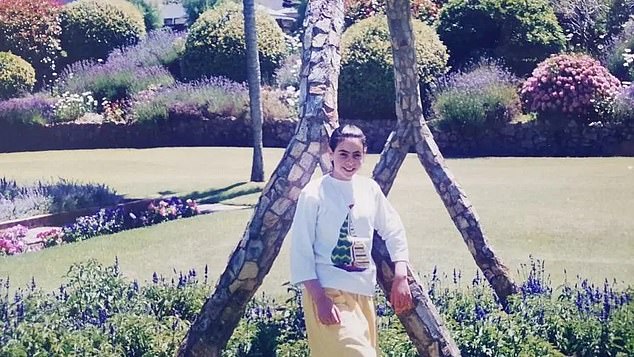 Ms Erlich (pictured as a child) said marriage and producing children was even more important than getting an education, and the girls viewed their studies as just killing time until their weddings

The case has shined a light on the inner workings of the ultra-orthodox and secretive Adass community in Ripponlea, near St Kilda.

Adass is startlingly similar to the Satmar community in Williamsburg, Brooklyn, where Deborah Feldman grew up, and whose memior inspire Unorthodox.

Feldman wrote of how she was pushed into an arranged marriage, using a community matchmaker, at 17.

She was under intense pressure to conceive – the only real function of women in Hasidic society – and had her first child at 19.

Members have barely any idea how sex or anything related to it works until they undergo pre-marriage counselling from their rabbi.

Both communities are so insular they are self-contained in a few blocks – just four in Melbourne – and members very rarely leave.

They were also both founded by refugees from the Holocaust who arrived in each country to start a new life having barely escaped death. 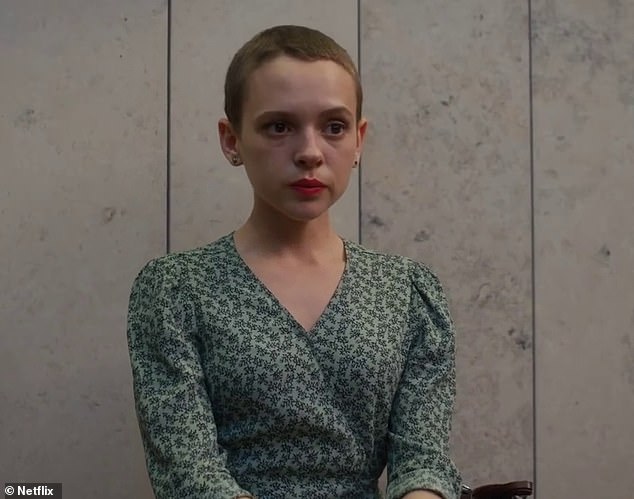 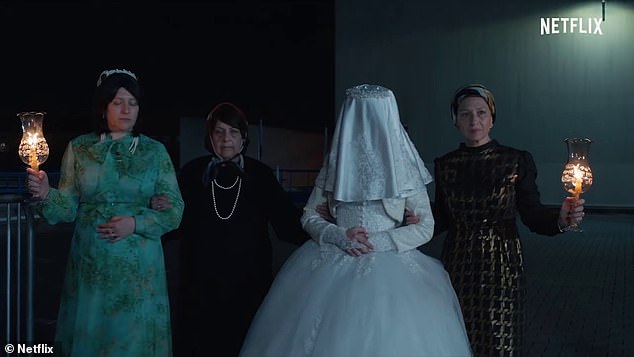 On the Sabbath, every Saturday, not even electricity is used and everything from lifts to light switches is controlled automatically to avoid breaking the strictest rules.

No one has a TV or the internet and children grow up only reading orthodox Jewish newspapers and have little idea of the outside world.

The sisters were so shielded from the outside world they had no idea September 11 had even happened until the following day.

With few outlets, Ms Erlich and her sisters kept diaries to make sense of their small, isolated worlds where they didn’t feel safe sharing their thoughts.

On the rare occasion they needed to travel for a dentist appointment, parents and family friends even shielded their eyes from ‘immodest’ billboards.

This obsession with modesty extends to what everyone in the community, even the men who wore dark trousers, long black coats and fur-trimmed hats known as shtreimels.

Women were expected to cover themselves with long sleeves and their legs down to their ankles – and many even wore wigs to cover their heads. 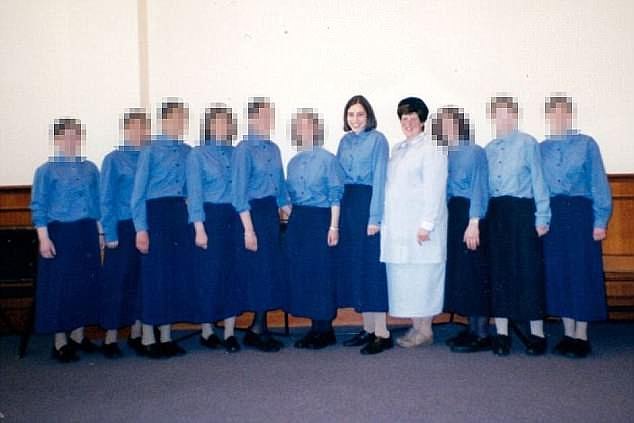 Ms  with her class at the Adass school alongside Leifer, who was principal from 2001 to 2008 when she fled to Israel 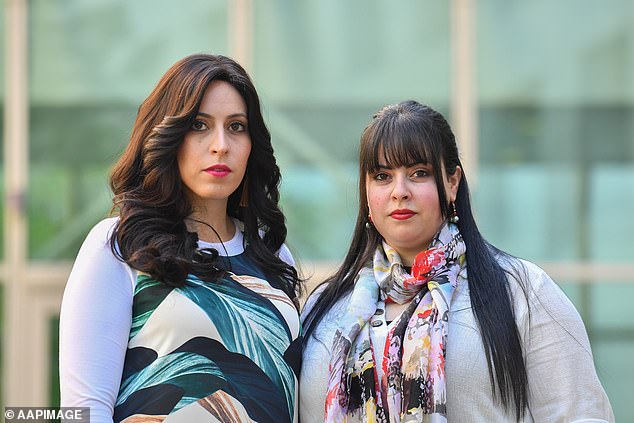 The sisters, just three of seven siblings, even had to cover up when they left their beds to get a glass of water at night – pyjamas were not enough.

They never even saw each other without being covered in clothes and were separated from boys in the community from the age of three.

Marriage and producing children was even more important than getting an education, and the girls viewed their studies as just killing time until their weddings.

‘I just need to fill up my time until the matchmaker calls my parents with someone she feels may be a good husband for me. I don’t really need VCE to get married and be a good religious wife and mother,’ Ms Erlich told the ABC.

Though their home life was unhappy and chaotic, even by Adass standards, reputation was everything and they could never express themselves.

Since Leifer’s alleged abuse came to light, Ms Erlich has been handed $1.27 million from the Abass school in a civil lawsuit, and $150,000 from Leifer herself.

‘That the sexual abuse occurred under the guise of Jewish education by the headmistress of the school makes the breach of trust associated with the abuse monstrous,’ Victorian Supreme Court Justice Jack Rush said. 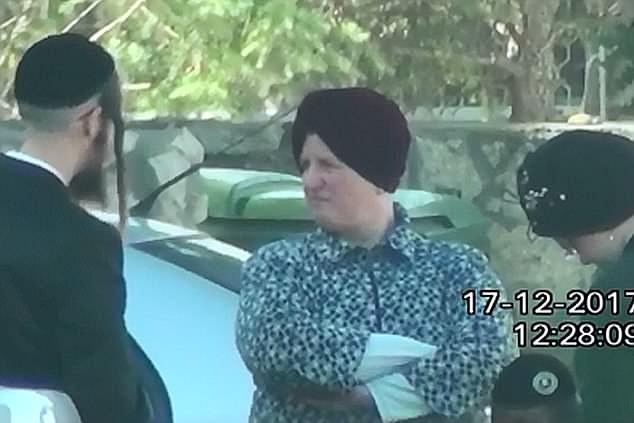 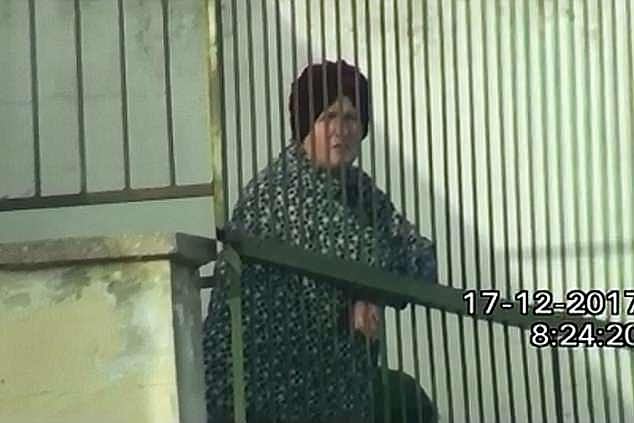 ‘The evidence discloses the sole motivation of the suspect in her dealings with the plaintiff was her own sexual gratification.’

Her sisters Ms Meyer and Ms Sapper also won lawsuits against the school in undisclosed out of court settlements.

The school in 2017 appointed Meir Shlomo Kluwgant as principal, which drew widespread condemnation due to his role in the Royal Commission into Institutional Responses to Child Sexual Abuse.

He sent a text message to Australian Jewish News calling the father of a victim at another Jewish school ‘a lunatic on the fringe, guilty of neglecting his own children’.

But Leifer is still in Israel, having claimed she suffered from clinical depression and PTSD and was unfit to stand trial, according to her lawyers.

She repeatedly fooled Israeli authorities with this excuse and was let out of jail while glacial extradition proceeding moved on. 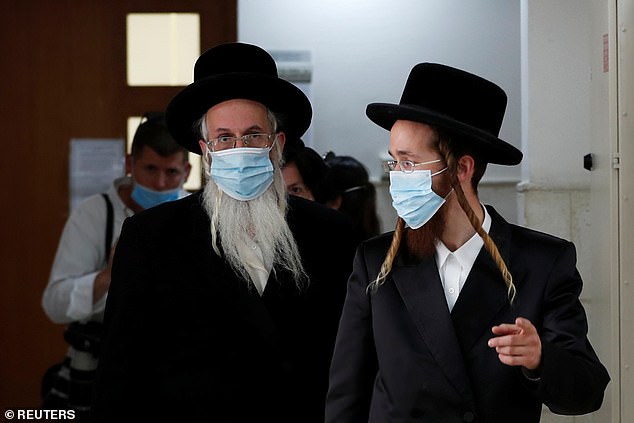 Ultra-Orthodox Jewish men, family members of Leifer walk outside the courtroom in Jerusalem District Court when she was ruled fit to stand trial 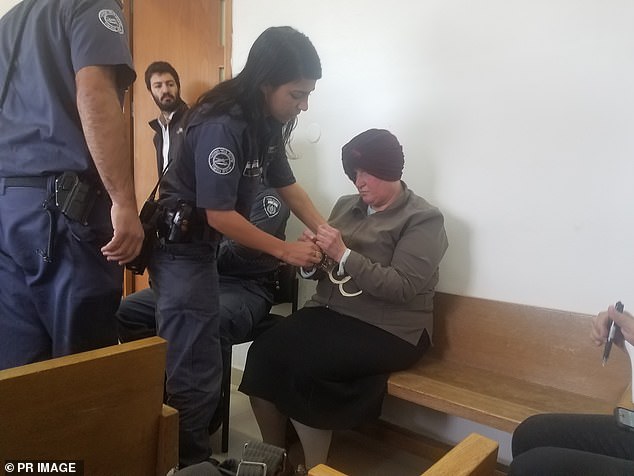 Israeli psychologists earlier this year judged her fit to stand trial in Australia, which was accepted by a court on Tuesday

Leifer and her husband moved to the Chust Hassidic community in Emmanuel, and Israeli settlement in the West Bank, in 2016.

The town was labelled a ‘haven for paedophiles’ where Leifer was allegedly allowed to carry on abusing girls ‘without consequence’.

But in 2018 she was thrown back behind bars after a private investigator filmed 200 hours of footage showing her shopping and otherwise living a normal life.

This and other evidence left a panel of Israeli psychologists to earlier this year judged her fit to stand trial in Australia, which was accepted by a court on Tuesday.

Now, perhaps, her alleged victims will soon have their day in court.