Madeline Holtznagel celebrated turning 26 in style over the weekend.

On Saturday, the model – alongside her billionaire pub baron boyfriend Justin Hemmes, 49, and her sister Simone, 28 – was spotted arriving to Vaucluse via a seaplane before heading to his $60million mansion for an epic pool party.

The trio, joined by an abundance of their pals, had already enjoyed a luxurious meal of oysters, caviar shots and birthday cake at Merivale boss Hemmes’ Newport restaurant Bert’s Bar and Brasserie earlier in the day.

Celebrating in style! On Saturday, Madeline Holtznagel (pictured), her billionaire pub baron boyfriend Justin Hemmes, her sister Simone and a group of pals enjoyed an epic day of celebrations as she turned 26 over the weekend

In photographs from the landing site in Vaucluse, Madeline was seen being pick-backed across the water by the plane’s captain to avoid getting her glamorous ensemble wet.

She looked absolutely stunning in a thigh-flashing floral dress, which she teamed with a pair of slip-on sandals.

Madeline, who was seen holding hands with her boyfriend as they walked across the beach, accessorised with a $2450 YSL bag and styled her hair in a trendy bun.

She wore just a touch of makeup to enhance her naturally striking features, including a pretty pink gloss and a flash of bronzer and highlighter across her cheeks. 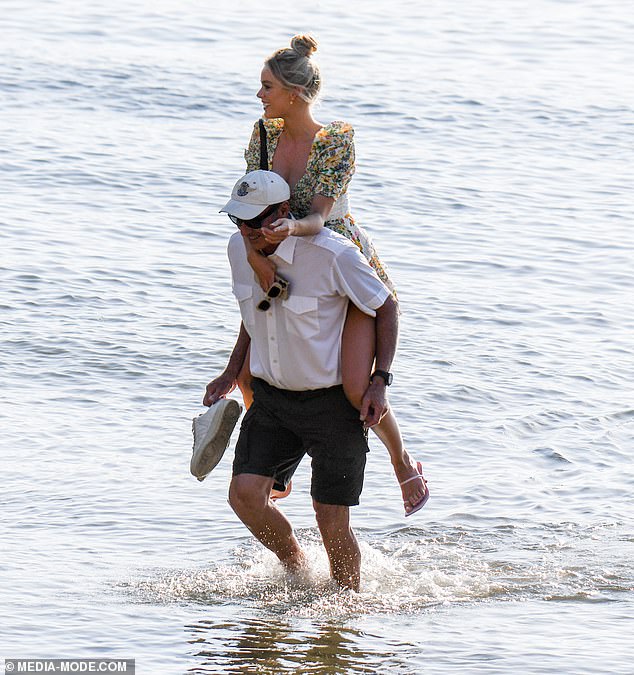 Safe journey! In photographs from the landing site in Vaucluse, Madeline was seen being pick-backed by the plane’s captain to avoid getting wet in the ocean 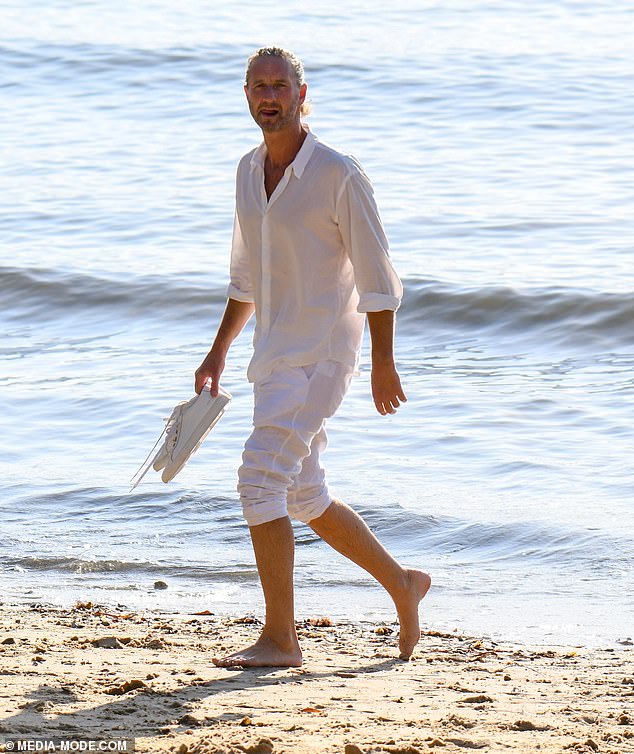 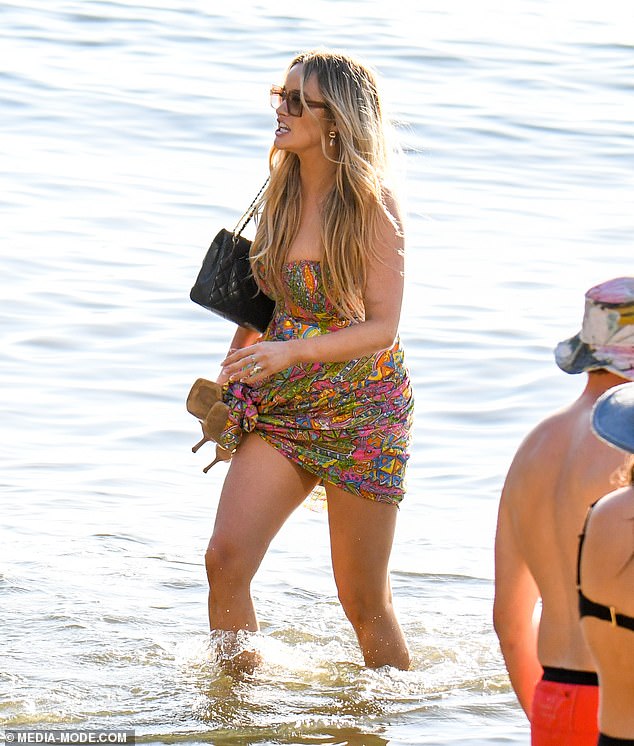 Stunner: Madeline’s sister Simone looked equally as beautiful in a stunning patterned dress, which showed off her epic curves and toned arms to perfection 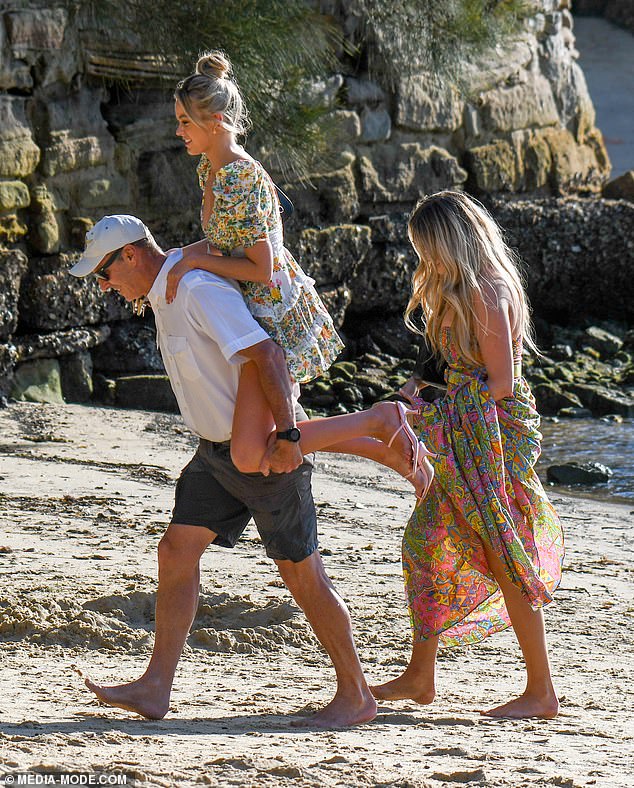 Safe journey! Madeline avoided taking off her pink heels and wetting her gorgeous floral dress after being carried to dry land by the captain 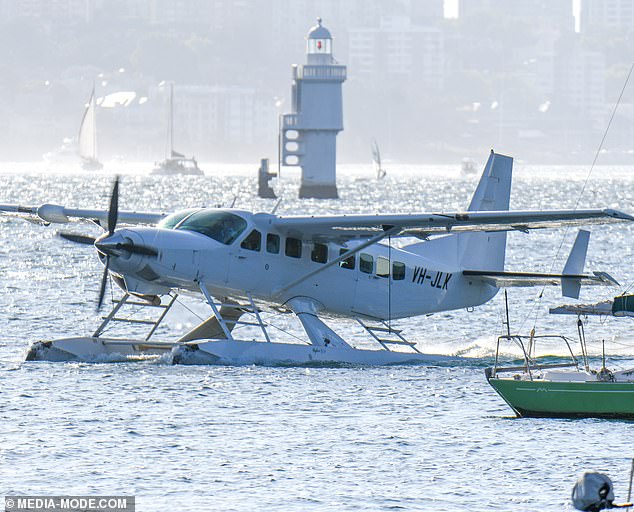 That’s one way to celebrate! The group arrived at the beach on a seaplane, before heading over to Hemmes’ mansion to continue the celebrations

Justin oozed beach chic in an all-white ensemble, including a linen shirt, shorts and white sneakers.

Madeline’s sister Simone looked equally as beautiful as her sister in a stunning patterned dress, which showed off her epic curves and toned arms to perfection.

As she exited the water, Simone was seen wrapping the long gown just above her thigh, while carrying a pair of heels in her hand.

She wore her long, luscious locks in a gentle beach wave, and donned a pair of oversized sunglasses for the occasion. 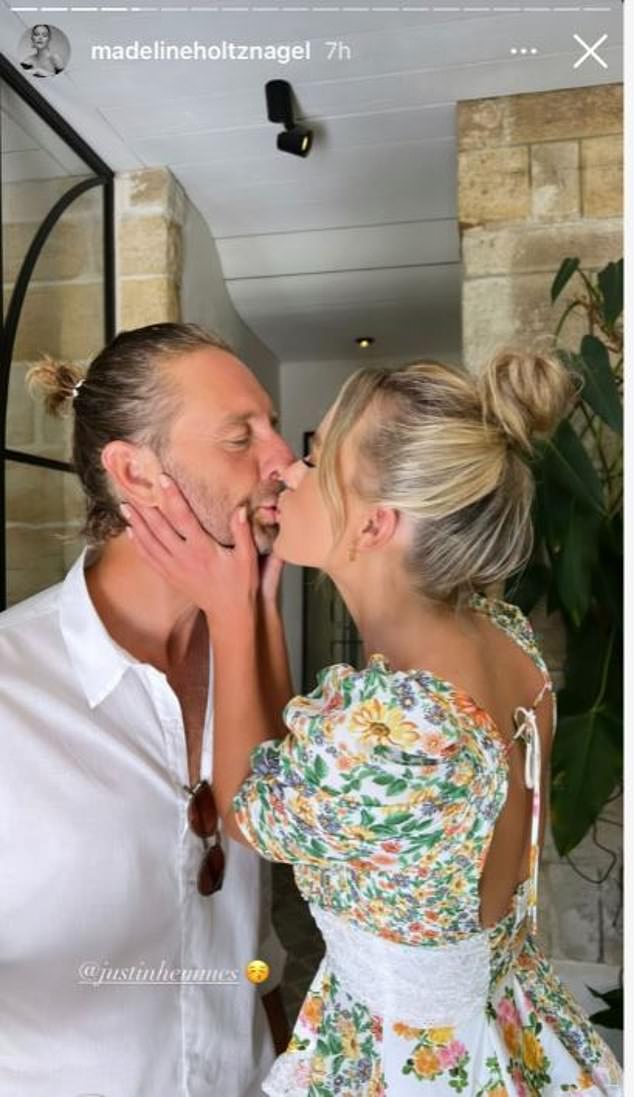 It’s love! Madeline also shared a picture kissing her boyfriend in their party clothes to commemorate the big day 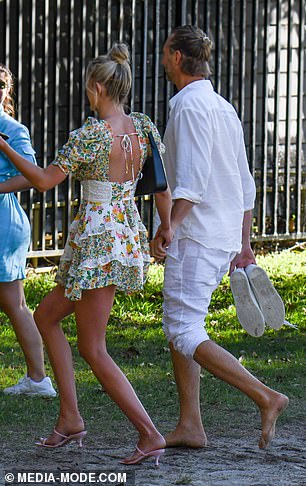 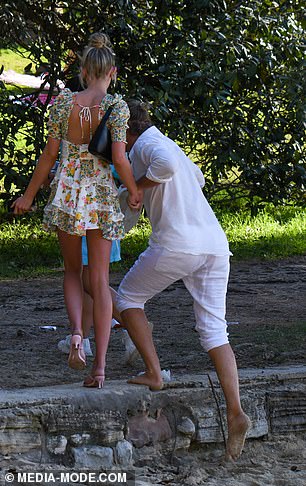 Cute! Madeline and Justin were seen holding hands as they sauntered across the sand following landing 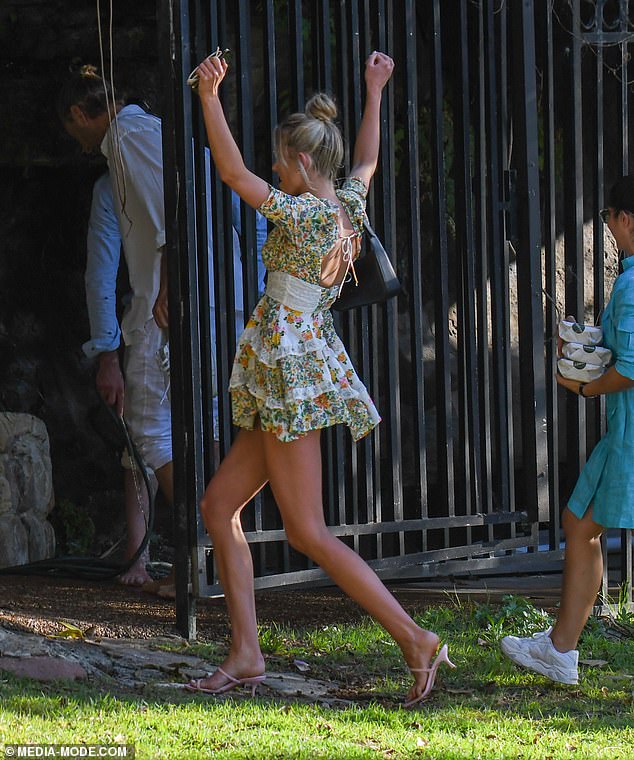 Happy! Madeline was seen throwing her hands into the air in celebration, as the next stage of her epic party day continued 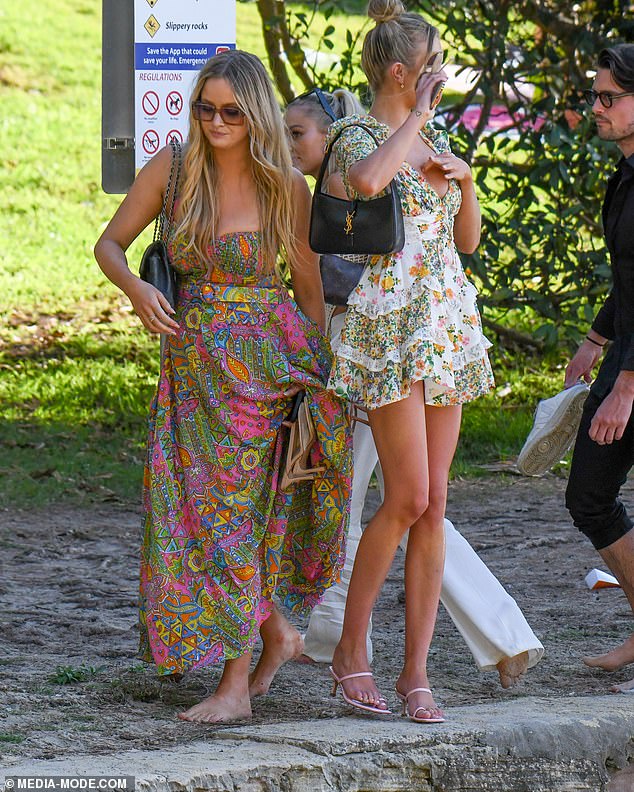 Beauty: Madeline (right) looked absolutely stunning in a thigh-flashing floral dress, which she teamed with a pair of slip-on sandals

Simone documented a lot of the day in a video shared to Instagram, showing the group enjoying their meal at oyster bar Bert’s Bar & Brasserie.

The gang enjoyed a lavish seafood menu including oysters and shellfish, before taking a shot of caviar off the back of their hands.

Madeline was treated to a birthday cake, and was seen planting a kiss on her boyfriend’s lips after blowing out her candles as her friend’s celebrated around her.

She later revealed her pals had made merchandise for the grand occasion, with a cap that read ‘Madeline World’ and a hoodie captioned: ‘It’s my birthday I’ll get high if I want to.’ 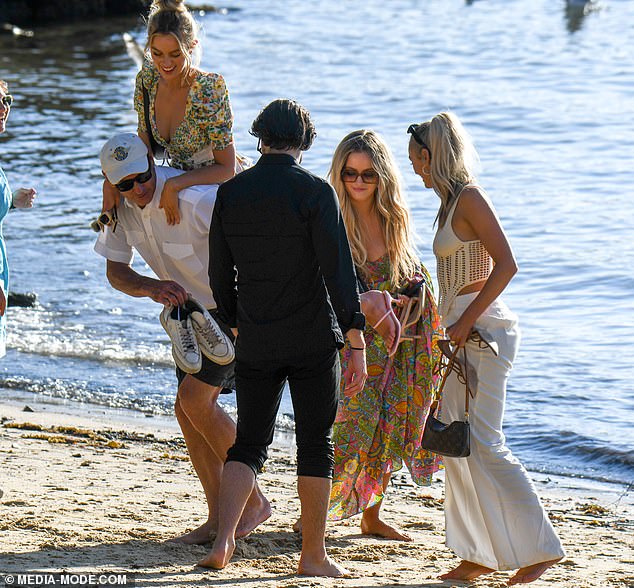 Friends: Madeline and her smartly-dressed group of pals appeared in high spirits as they enjoyed the baking Sydney sunshine

All smiles: Justin appeared in a great mood as he stormed through the water barefoot as the group continued their party 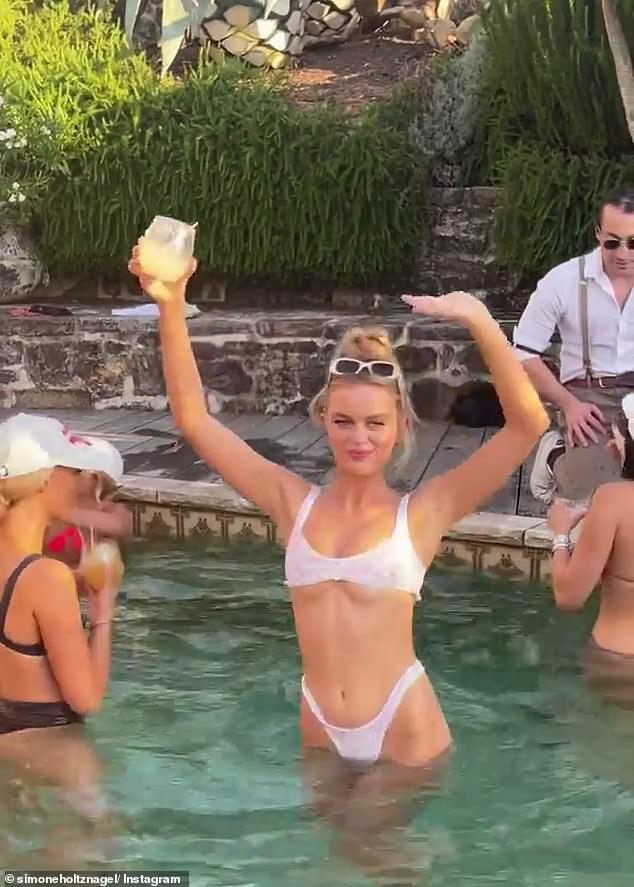 Wild! Later in the afternoon, the group were seen enjoying an epic pool party at Hemmes’ $60million mansion 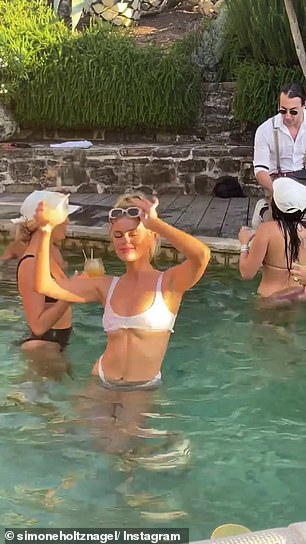 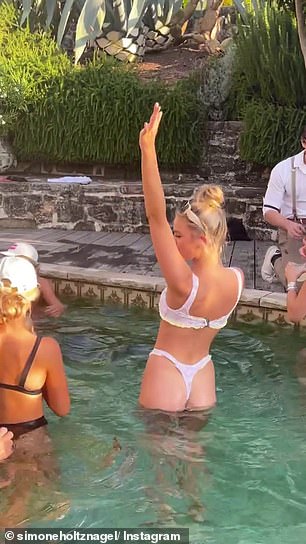 Sizzling! Madeline slipped into a slinky white G-string two-piece and bounced around the pool with her bikini-clad pals 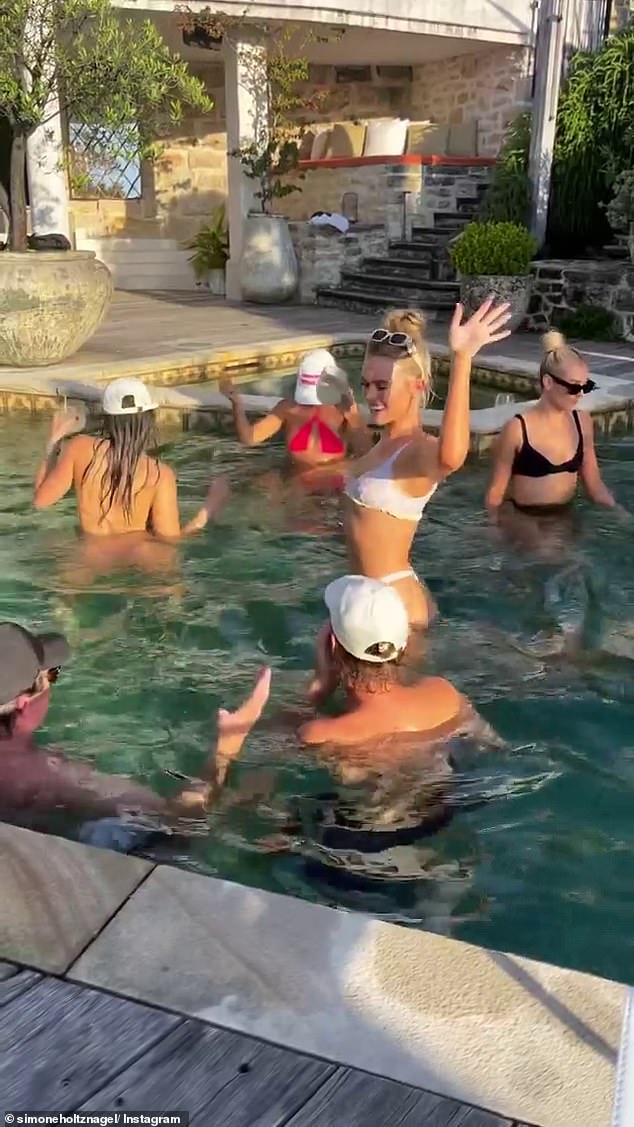 Whale of a time! Simone shared a video of her sister lapping up the sunshine in the pool, as they danced to music following a day of activities 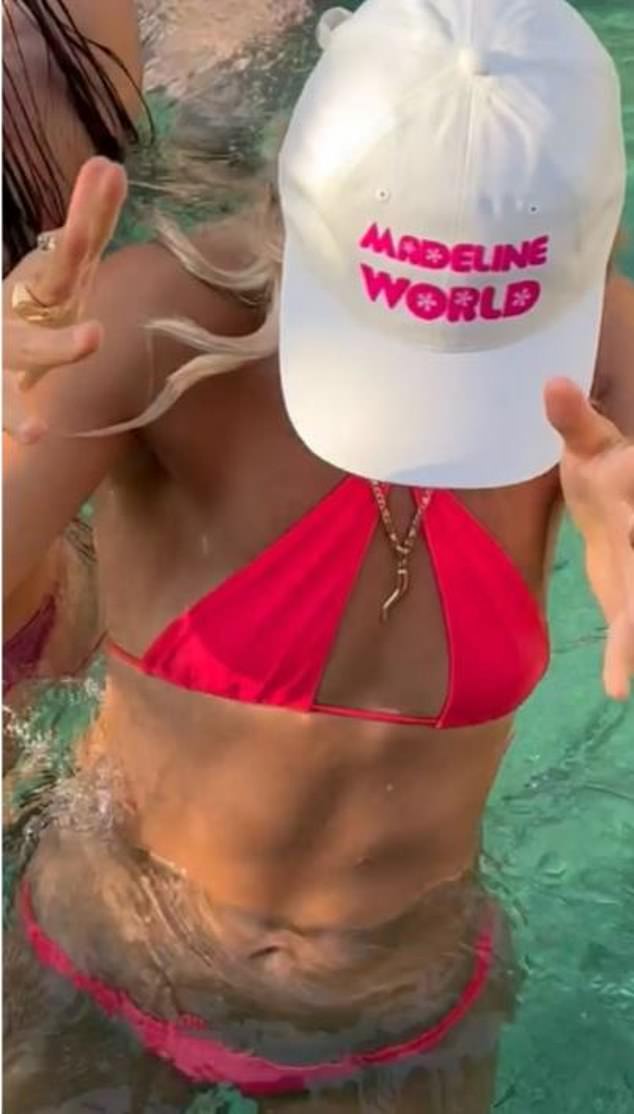 Merch: Madeline’s friends were decked out in merchandise to celebrate the model’s big day 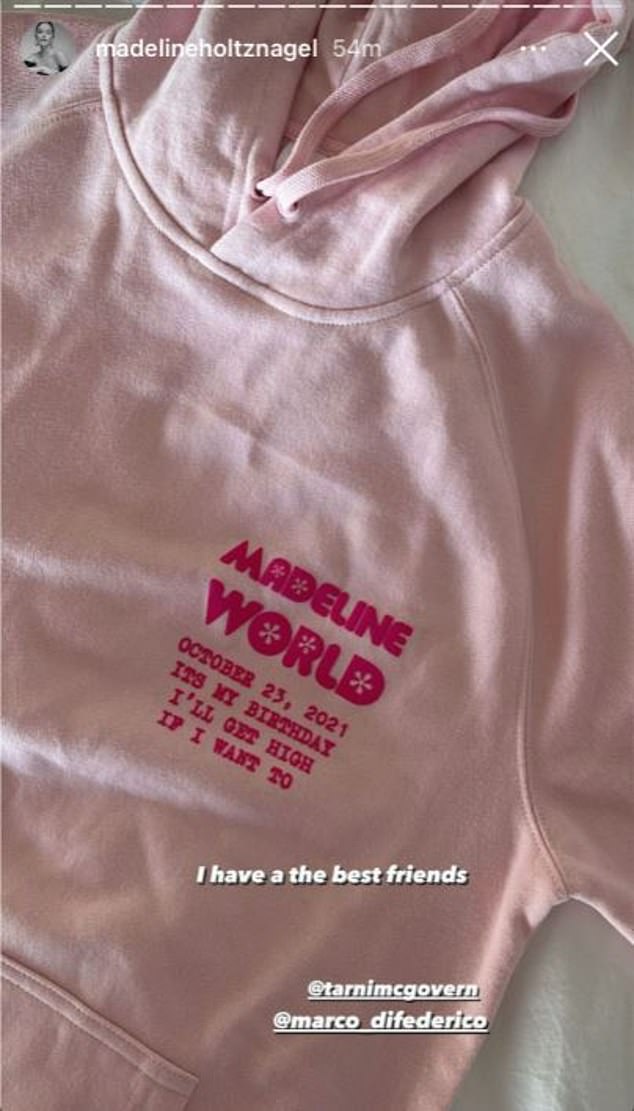 ‘I have the best friends’: One of Madeline’s pals made a hoodie especially for the occasion, which read: ‘It’s my birthday I’ll get high if I want to’

Later in the afternoon, the group were seen enjoying an epic pool party at Hemmes’ mansion – with Madeline slipping into a slinky white G-string two-piece and bouncing around the pool with her bikini-clad pals.

Justin himself had shared a sweet tribute to his girlfriend online, sharing a rare photo of the pair together alongside the caption: ‘Happy birthday beautiful girl.’

The couple have remained quite private through the duration of their relationship.

While it’s not known exactly how long the couple have been dating, she hinted their relationship has carried on longer than many people expect. 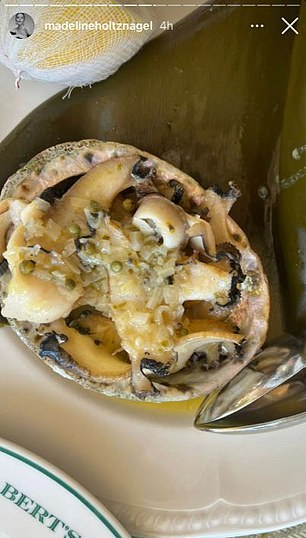 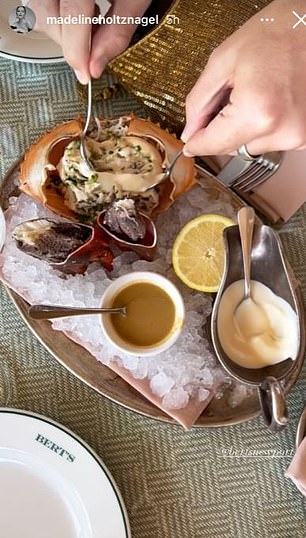 Delicious! Simone documented a lot of the day in a video shared to Instagram, showing the group enjoying a meal at oyster bar Bert’s Bar & Brasserie – which is owned by Merivale boss Hemmes 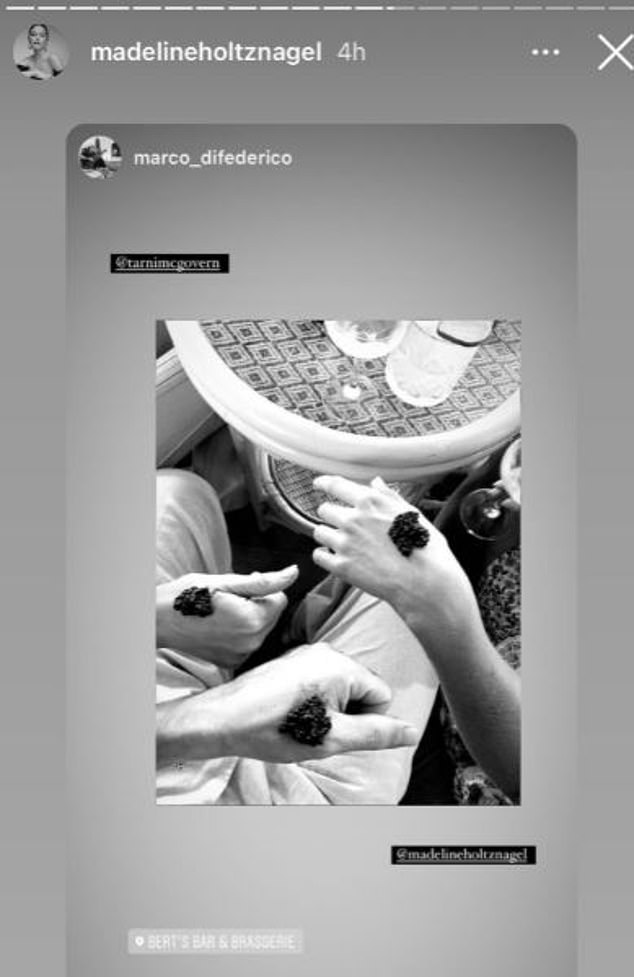 Shots! One of Simone’s friends also shared a video of the trio doing shots of caviar off their hands 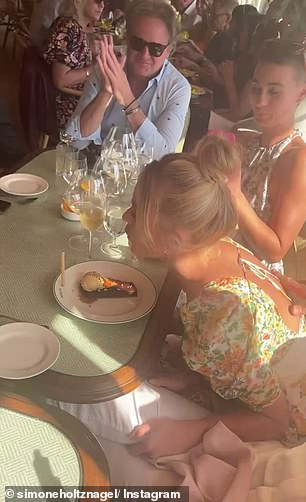 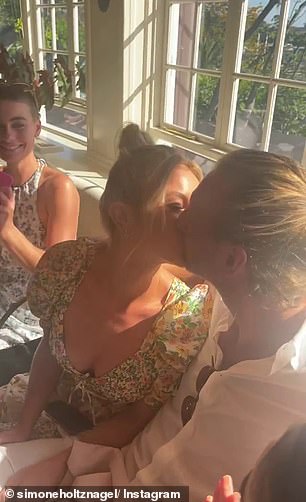 Make a wish! Madeline was then given a slice of birthday cake as her pals celebrated around her 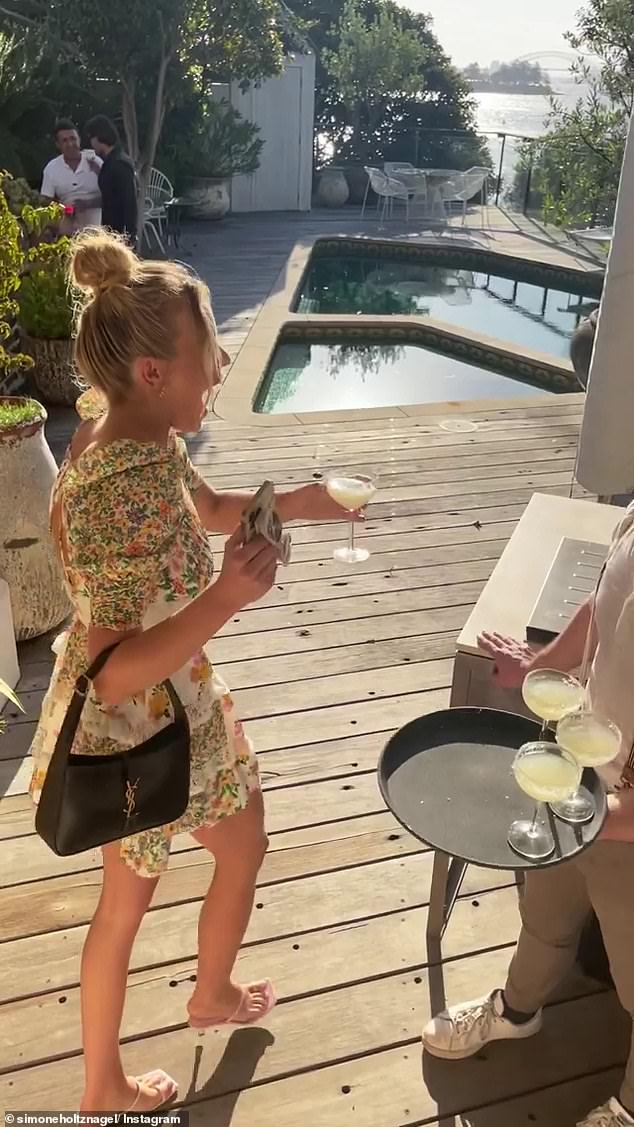 Cocktails! Upon arriving at Hemmes’ mansion, Madeline and her guests were greeted with a never-ending flow of cocktails

‘We have known each other for two years and met when I was modelling in Singapore,’ she said at the time.

It was also reported that Madeline was living in a penthouse apartment owned by Justin in the Sydney beachside suburb of Coogee. 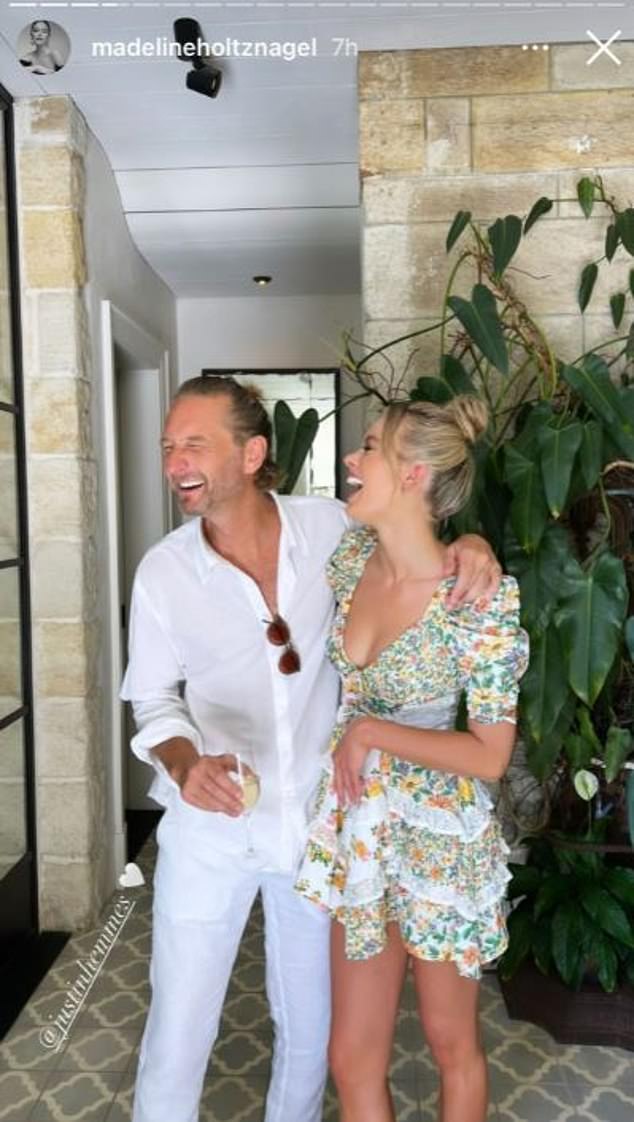 Romance: Justin himself shared a sweet tribute to his partner online, sharing this rare photo of the pair together alongside the caption: ‘Happy birthday beautiful girl’ as the pair drank expensive French champagne