Inside Marrakech that has a vitality like nowhere else

Our guide was engaged to show us Marrakech’s historic sites.

At first, he did so, starting with a token visit to the glorious Ali Ben Youssef Madrasa, known for its Islamic art of calligraphy and decoration. But soon, all pretence at sightseeing was cast aside as he led his gullible clients from one friend’s shop to another’s.

Everyone is on the make in Marrakech. That’s what gives it a vitality like nowhere else on Earth.

Epic in every way: Jemaa el-Fnaa is the largest square in Africa

But it has its downsides. The hustle and bustle is insatiable. Scooters buzz pedestrians, pedestrians shout back; the muezzin calls the faithful to prayer; street food vendors harass the hungry, beggars beg, tourists are trapped.

From all directions, crowds funnel into the passageways of the souks, selling every sort of trinket, carpet, basket, clothes, leather work, spices and metalwork as their shopkeepers stand by, ever vigilant for a new customer. Westfield it isn’t.

On arrival, we drove through the rose-red city walls and slowed to a crawl. We were in the medina — the heart of old Marrakech.

Where was our hotel? Suddenly, out of the hubbub, a khaki-uniformed doorman appeared and ushered us down a narrow passageway, though a carved wooden door and into the cool of La Sultana Marrakech.

Only three-and-a-half hours earlier, we’d been in London. Now, we were enjoying a welcoming glass of almond milk on the hotel’s roof garden, looking out in one direction to the peaks of the Atlas Mountains and in another to the minarets of the old city.

Below us were the 17th-century tombs of the city’s one-time ruling family and, on a nearby telegraph pole, a couple of storks nested in the sun. 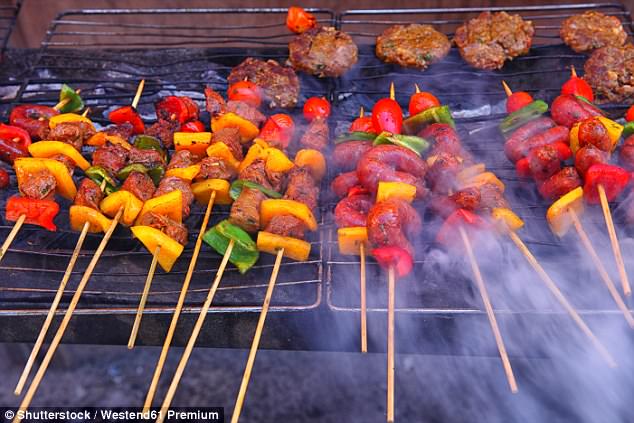 Enticing: You can find delicious food and exotic flavours at the Jemaa el-Fnaa market

La Sultana is five riads (traditional Moroccan homes) combined, each decorated in different Moroccan styles. It had a marble courtyard, its walls with intricate floral patterns in stucco, fringed by carved cedarwood beams.

Soon, we left the tranquillity of the hotel for the agitation of the street and the close combat of bartering in the souk.

Despite my wife’s best efforts, we never picked up the art of bargaining. It’s not an easy sport. Instead, we went to a fixed-price supermarket and emerged with an assortment of slippers, lamps, baskets and plates.

Then we headed for Jemaa el-Fnaa, the largest square in Africa and certainly one of the most extraordinary public spaces in the world.

By the end of the weekend, we had seen most of the sights Marrakech has to offer, including Yves St Laurent’s Majorelle Garden, which houses an enormous collection of cacti. So we decided to take a last look at the city with a horse and carriage. Our hotel doorman explained to the driver that we wanted a one-hour tour, combining something of the old city with a glimpse of the new.

An hour later, our driver stopped his barouche outside the Majorelle Garden. ‘But we said we didn’t want to come here,’ we told him. ‘We have visited already.’

He looked at us blankly, clicked his tongue and whipped his two horses into action. We spent the next hour meandering through the suburbs, and trotting round the city’s ring road in a fog of fumes from thousands of spluttering mopeds.

At last, we were back where we had started, with a demand to pay for a two-hour ride. After some ill-tempered negotiation, we retired once more to the haven of the hotel.

Go with it, is the required mantra. Or just have some fun spotting the ruse.

There’s an antidote to all this mayhem as you return to La Sultana, where the mood is wonderfully relaxed. You can join a cookery class and learn how to make the Moroccan speciality, tagine (a slightly over-rated dish, but fun to cook), enjoy a massage in the spa and relax in the sunshine by the pool.

Marrakech is so gloriously full-on that you need to stay somewhere you can switch off.