Inside one of the Lake District’s cosiest rental cottages, located near Grasmere and Windermere

One of the best things about the gloomier, colder months of the year, you’ll agree, is walking past a cosy house at night and catching a glimpse inside through open curtains – the spirits lifting as you imagine what it might be like to live there.

Little Nut Cottage in the minuscule village of Elterwater in the Lake District is a prime candidate for such winter-window lusting.

Peek through the living room window to behold a hygge wonderland – a luxurious L-shaped sofa, a wood-burning stove, a basket of logs, an armchair, a wooden beam and the plumpest of cushions strewn hither and thither. 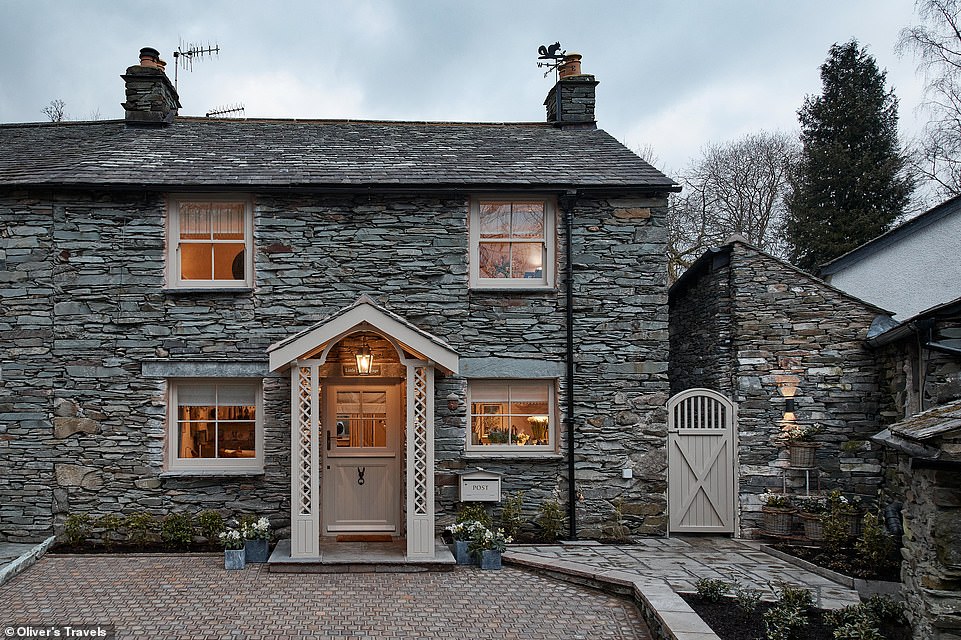 Some of Britain’s most eye-catching landscapes are right on the doorstep of the cottage, reveals Ted 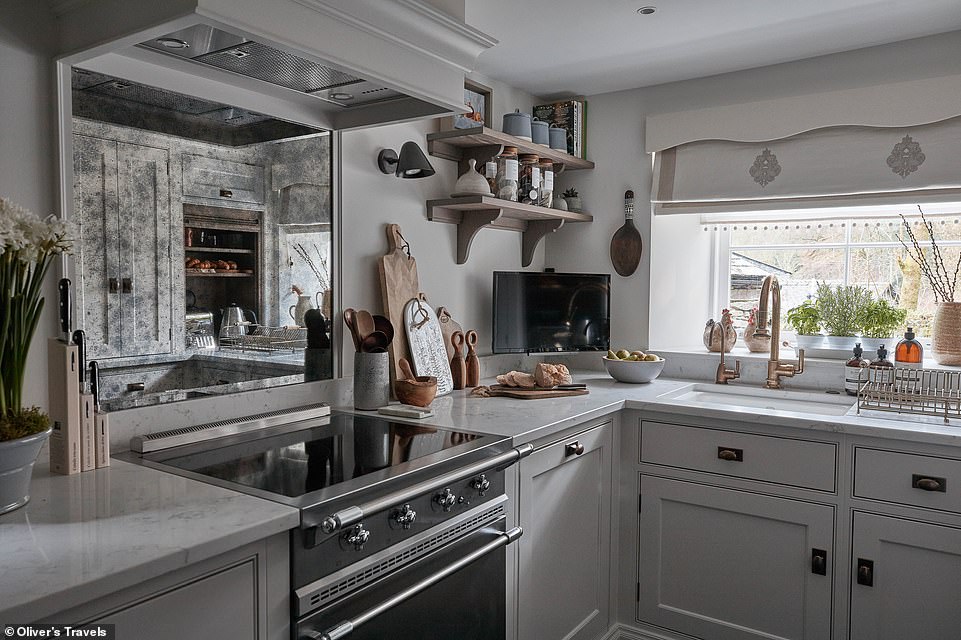 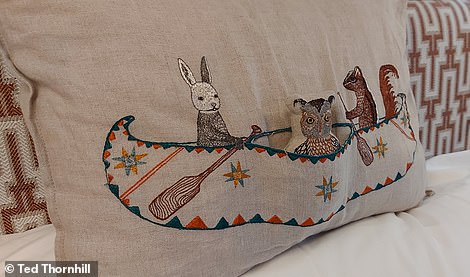 Endearing detail: An embroidered cushion with a cute owl toy

That L-shaped sofa is nigh-on impossible to extricate yourself from, it turns out, partly thanks to those perfectly plump cushions.

And the kitchen next door is invitingly ‘farmhouse’ and packed with all the mod cons, with a special mention to the ingenious hinged compartment underneath the sink for storing dishcloths and the like.

Upstairs there are two beautiful, luxurious ensuite bedrooms, one made up as a twin during our visit, one with a four-poster double bed.

There are fabric headboards, fabric blinds, pillows embroidered with cute animal figures – and pockets for little animal toys – and the ensuite for the double room comes with a standalone tub. Both feature walk-in rain showers. 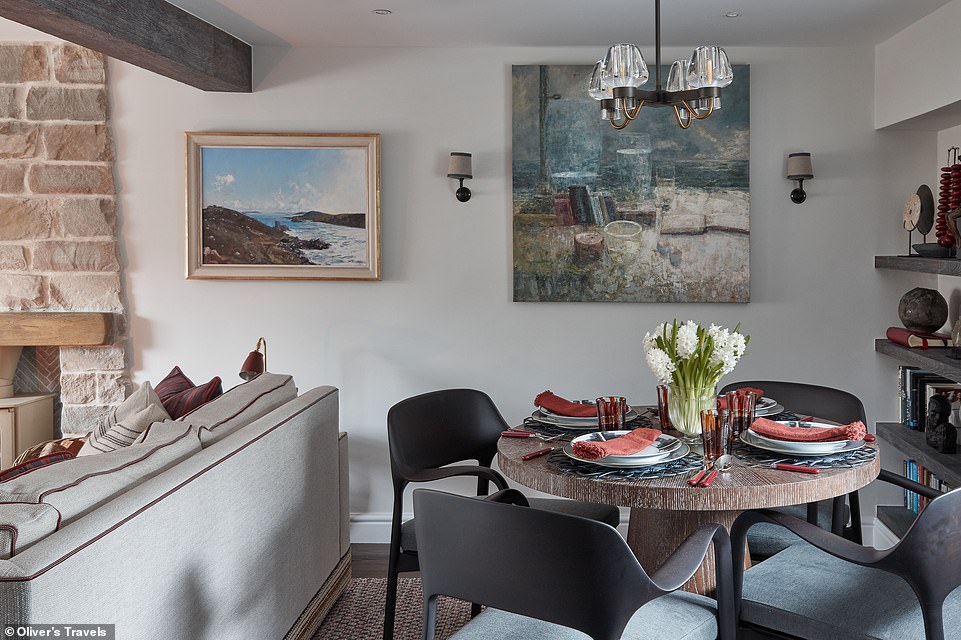 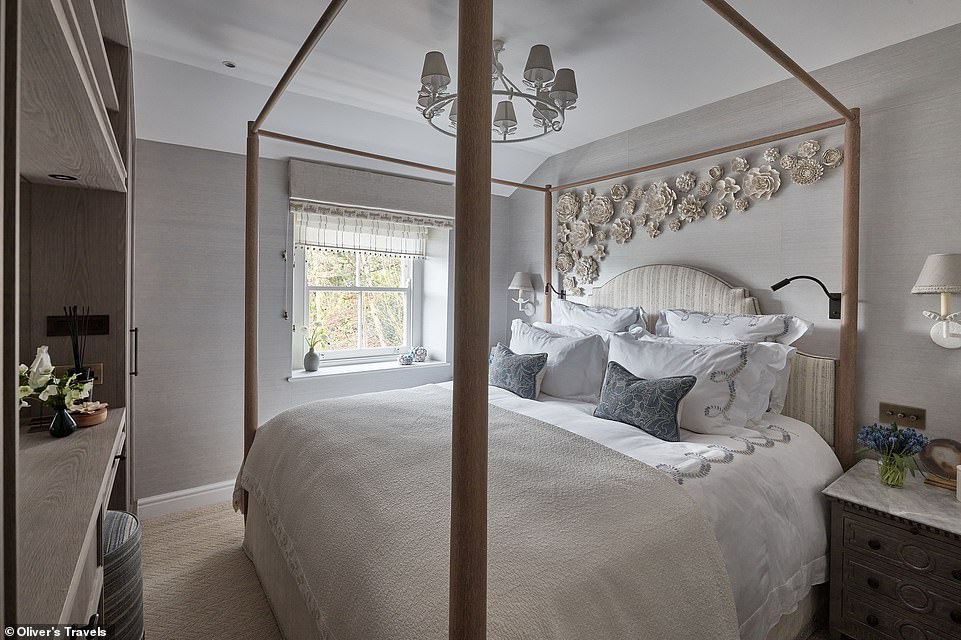 Upstairs in the cottage are two ‘luxurious’ bedrooms. Pictured is the four-poster double 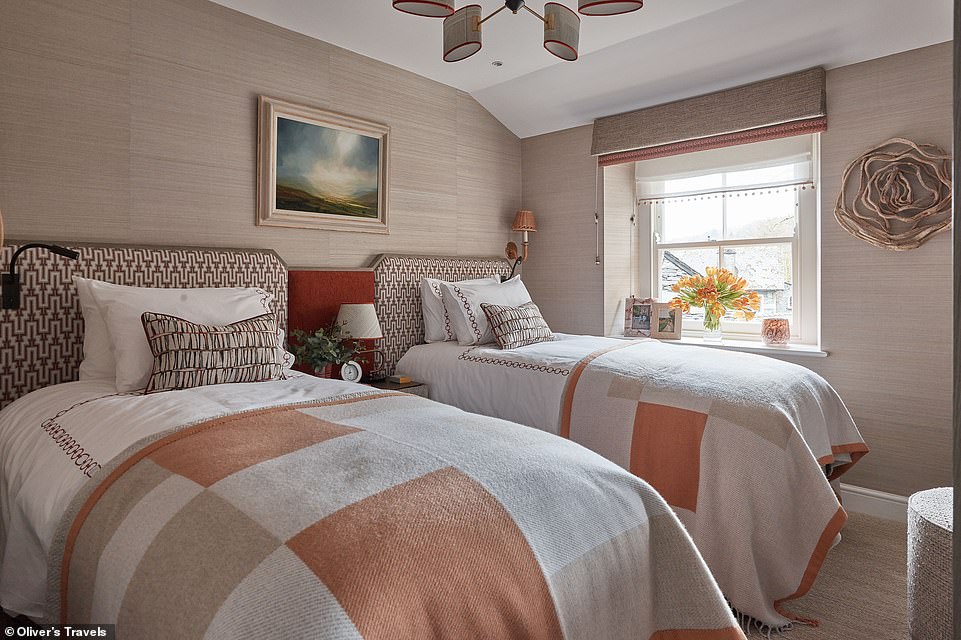 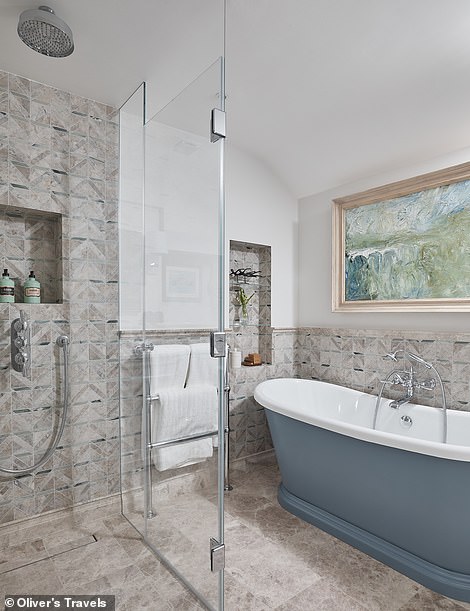 Back downstairs we discover that even the utility room is cosy.

I say utility room – this one has delusions of grandeur.

It’s housed in a separate annexe – separated from the main building by a path – and features its own country-style kitchen cupboards, a sink, a padded banquette and boot warmers, as well as a washing machine and tumble dryer.

Steps at the back lead up to a garden and a hot tub – but during our blustery November visit, we remain holed up indoors.

Then there’s the location – it’s incredible, with some of Britain’s most eye-catching landscapes right on the doorstep. This is a world of windswept crags, dramatic valleys, gushing rivers, dreamy lakes, chocolate box hamlets, lost ruins and lost mobile phone signals.

A few miles to the east are Ambleside and lake Windermere, just to the north idyllic Grasmere, and to the west the magnificent Langdale Pikes, with England’s highest peak, Scafell Pike, just beyond.

And let’s not forget the inviting Britannia Inn right next door, which deploys local ales, and fodder including top-end fish and chips, to a jovial crowd.

The cottage proved to be a wonderful base for my chum and me while we attempted to cycle up some of Britain’s most outrageous hill climbs, such as Wrynose Pass, which lies around five miles away.

And every day it was an effort to leave – because the snuggle was real. 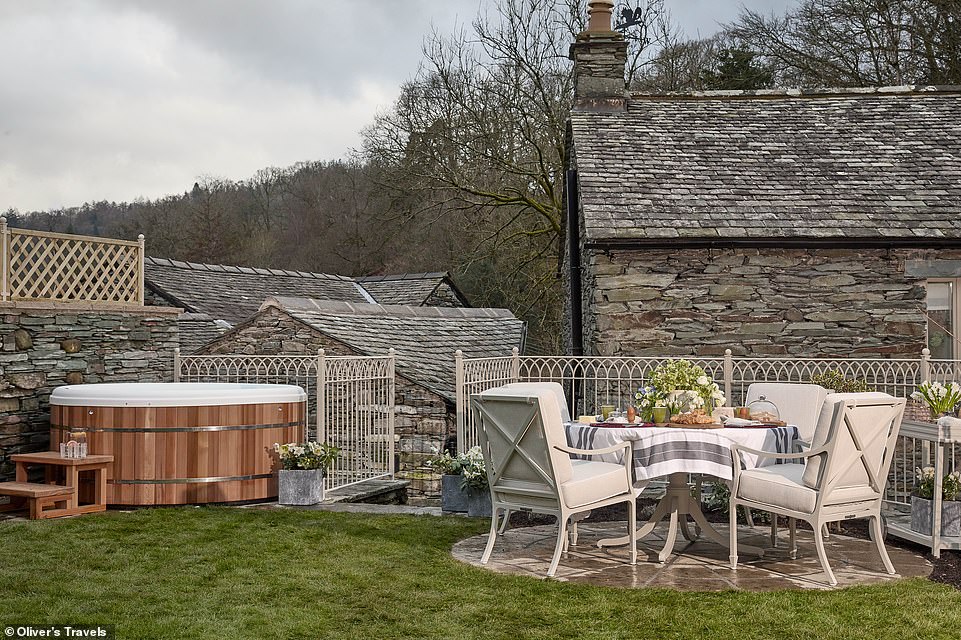 The cottage has a lovely garden and a hot tub, though Ted wasn’t able to make use of these during his blustery November visit 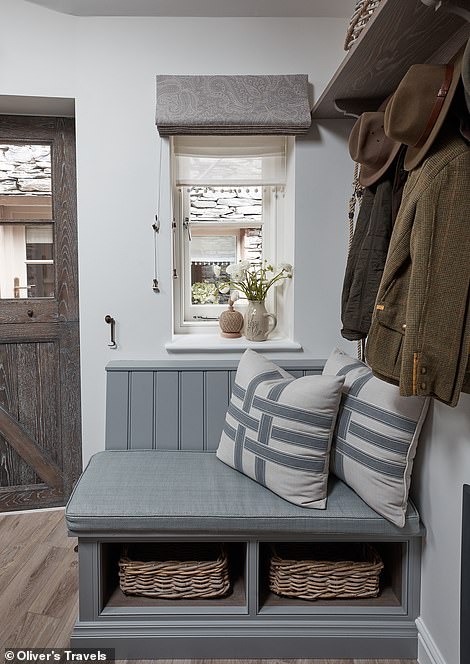 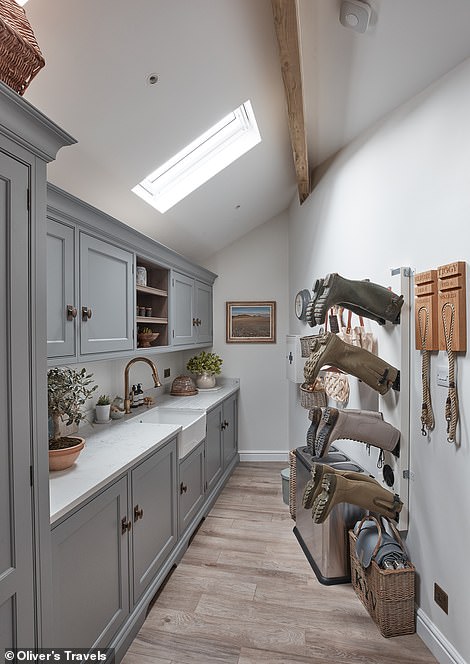 The cottage’s utility room (above left and right) has delusions of grandeur. As well as a washing machine and tumble dryer, it features its own country-style kitchen cupboards, a sink, a padded banquette, and boot warmers 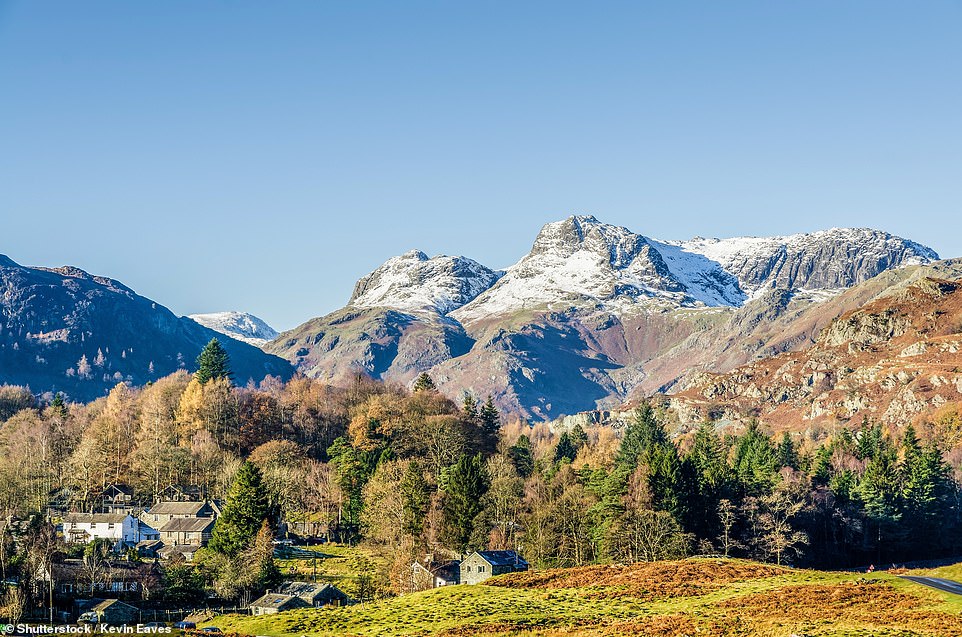 Slate-smothered Little Nut Cottage is located in Elterwater (above), with the Langdale Pikes lying just beyond 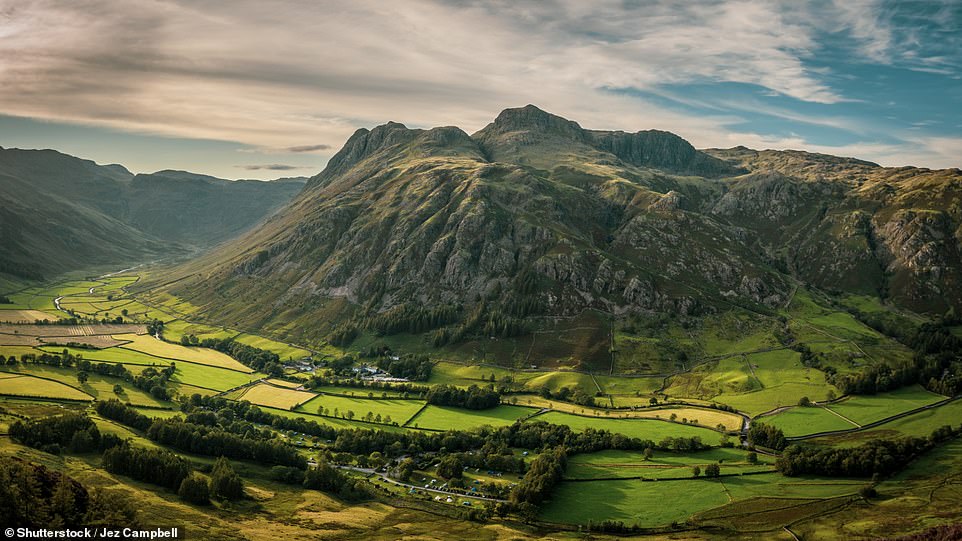 The Langdale Pikes look good whatever the weather. This picture was taken near Blea Tarn summit

Ted was hosted by Oliver’s Travels. Little Nut Cottage (listed as ‘The Little Cottage’ on Oliver’s Travels) sleeps four across two bedrooms/two bathrooms. From £1,479 for a three-night stay or from £2,365 for a week. Four and five-night stays also available out of peak.

PROS: As cute as a baby squirrel, as cosy as a 15-tog duvet, well-equipped, incredible location, luxurious.

CONS: Ideal as a base for exploring the Lake District, but not ideal if you’re averse to semi-remote locations. There’s good Wi-Fi at the cottage, but very poor mobile phone reception.

For more on the Lake District visit www.visitlakedistrict.com.