Inside the $25 million wedding of Jeff Sutton’s daughter

Final preparations are being made for one of the most lavish and expensive weddings ever staged for the youngest daughter of New York’s ‘King of Retail’.

Billionaire Jeff Sutton has splashed out an estimated $25 million to see his daughter Renee and fiancé Eliot Cohen wed in the stunning Puglia region of southern Italy.

More than 400 guests have been flown from New York on chartered jets at a staggering cost of over $3 million for the ceremony overlooking the Adriatic Sea.

The couple will marry in a Jewish ceremony on a raised platform built on a rocky outcrop close to the ancient Saint Stefano abbey while a nearby beach has been transformed into a party area complete with stage and dance floor.

Renee Sutton and fiancé Eliot Cohen are both in their early twenties and will be married in a Jewish ceremony on Thursday. Her father Jeff Sutton is known to keep a low profile, but he is sparing no expense for his youngest daughter’s wedding 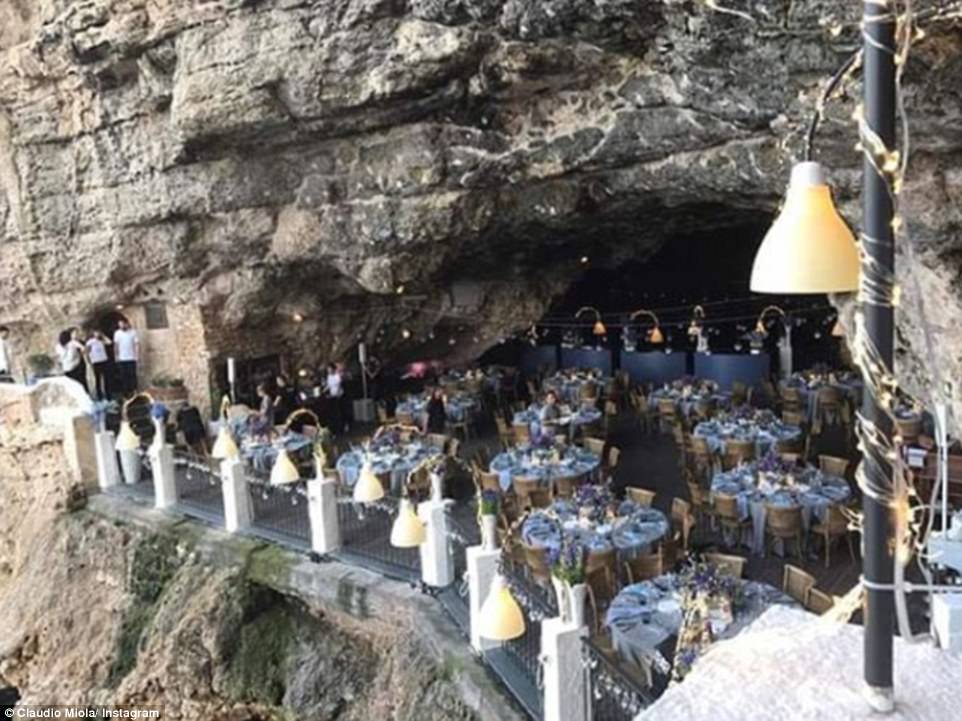 Guests will dine on purple tables with lavender accents. Photos on inset reveal the venue is at the magnificent Borgano resort inside what appears to be a natural rock formation 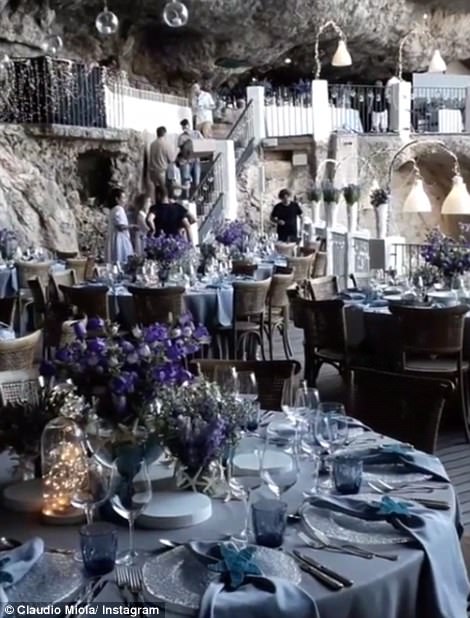 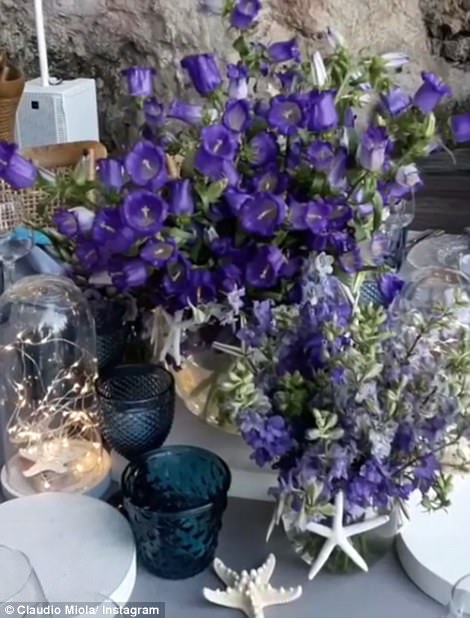 The stunning display featured starfish details for the place settings of one of the dinners. There was also a starfish light fixture in the middle of each table 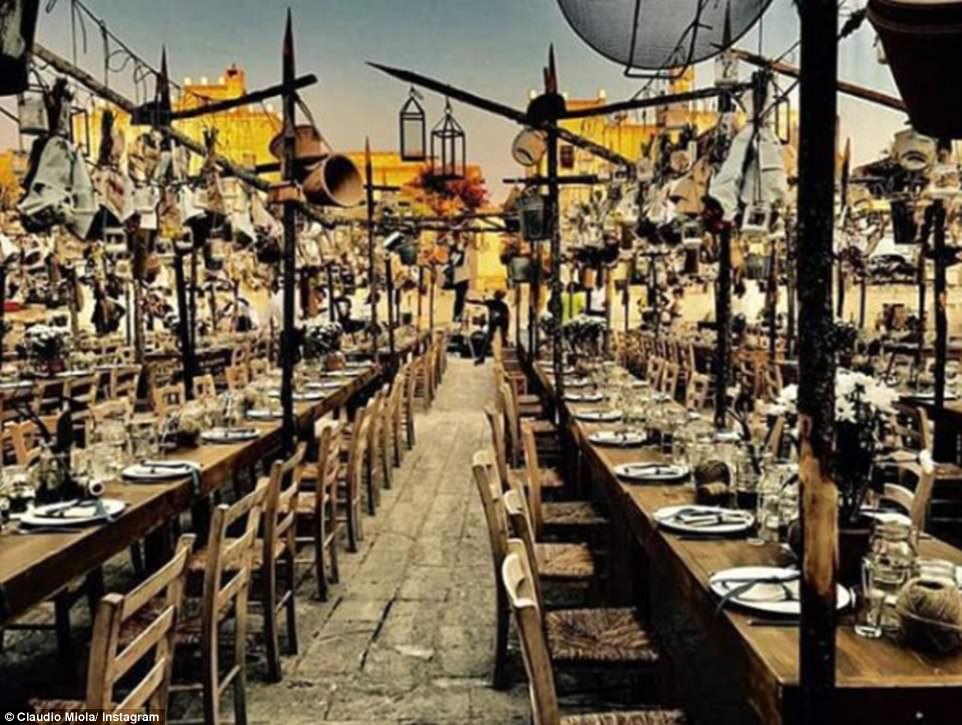 The tables guests ate at tables decorated with hanging flowers. The celebration will continue Wednesday and Thursday 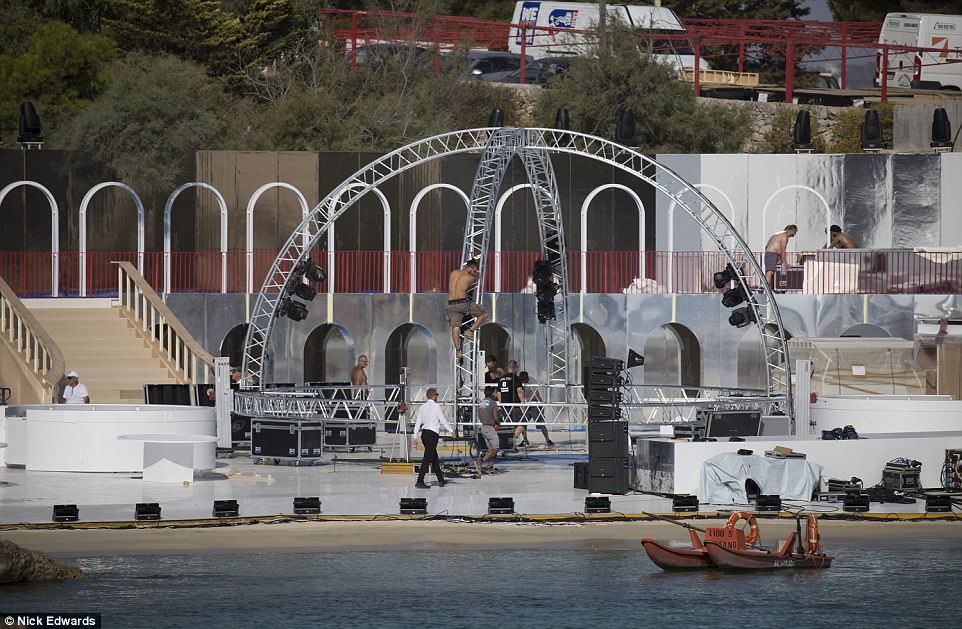 Private concert: Workers were seen setting up a stage where a VIP guest, rumored to be Madonna, will perform. Bride Renee Sutton is the daughter of the world’s 522nd richest man 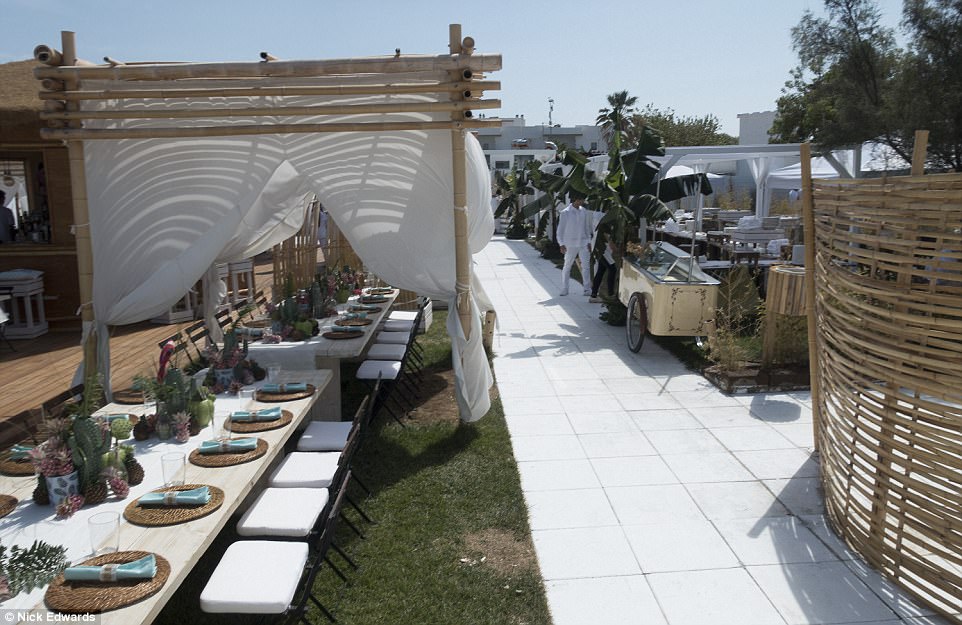 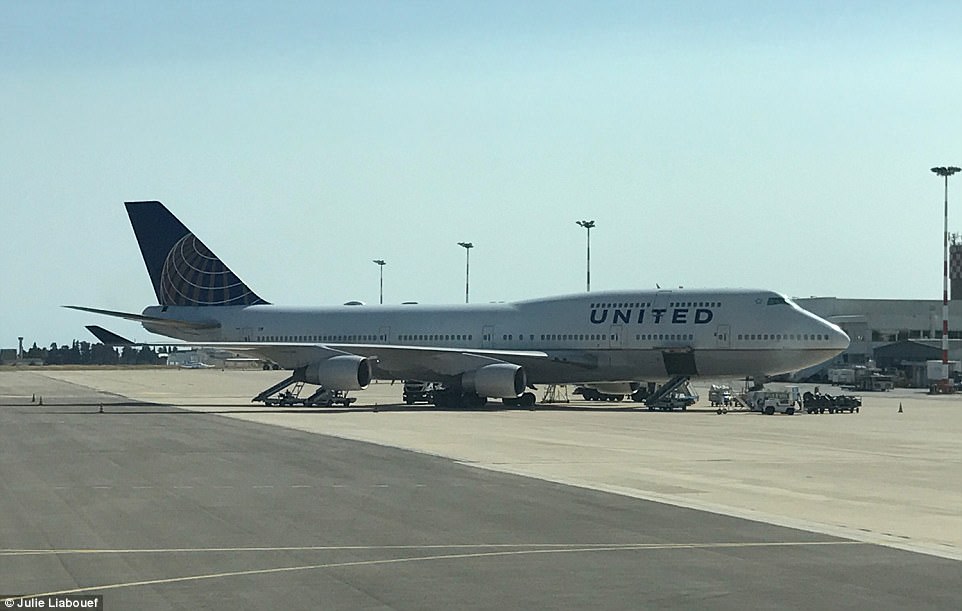 A chartered jumbo jet was hired to whisk the first 150 wedding guests from Newark to Italy. With return trips at the end of the week the final bill for the flights is estimated to be $5 million 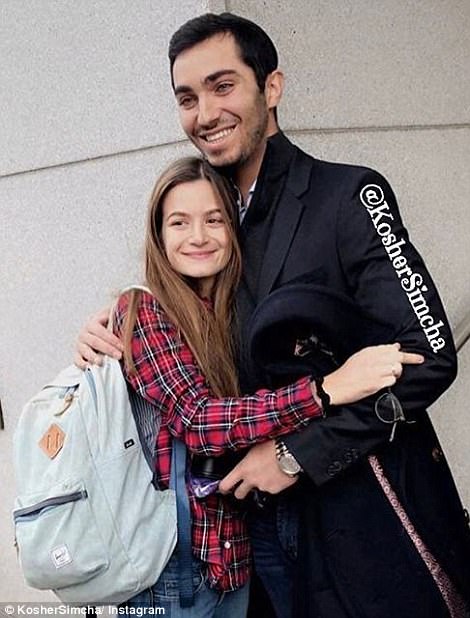 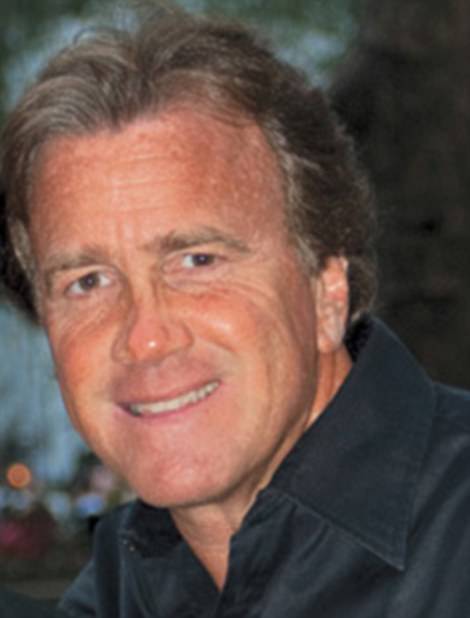 Renee Sutton and fiancé Eliot Cohen’s wedding will have eight tons flowers from Holland on display. Her father, 57-year-old Jeff Sutton, is worth approximately $3.6 billion

On Tuesday, workmen were putting the finishing touches to the raised platform on the rocks where the couple, both in their 20s, will marry on Thursday afternoon.

Construction crews were also hard at work on the cove where the celebration of the wedding will take place and where eight tons flowers from Holland will be on display.

Wooden flooring was being laid on the sandy beach while finishing touches were put to a wide staircase from which the married couple will descend to join guests.

Lighting rigs were being fixed to two steel arches over the stage area where a VIP guests – rumored to be Madonna – will perform.

A giant bar area was also constructed and guests will have the choice of partying at the beach or back in a giant marquee erected at the Borgano resort.

Around the wedding venue security teams patrolled the area as a non-stop procession of trucks brought building materials and refrigerated trucks carried food that will be on the 20-page menu prepared by a team of international chefs.

The $25 million lavished on the event by 57-year-old Sutton – the world’s 522nd richest man with a $3.6 billion fortune – ranks among the most expensive ever staged.

It is twice the amount reality star Kim Kardashian spent for her ill-fated wedding to basketball star Kris Humphreys and $5 million more than the amount ex Formula One boss Bernie Ecclestone spent on his daughter’s Petra’s extravaganza in Italy six years ago. 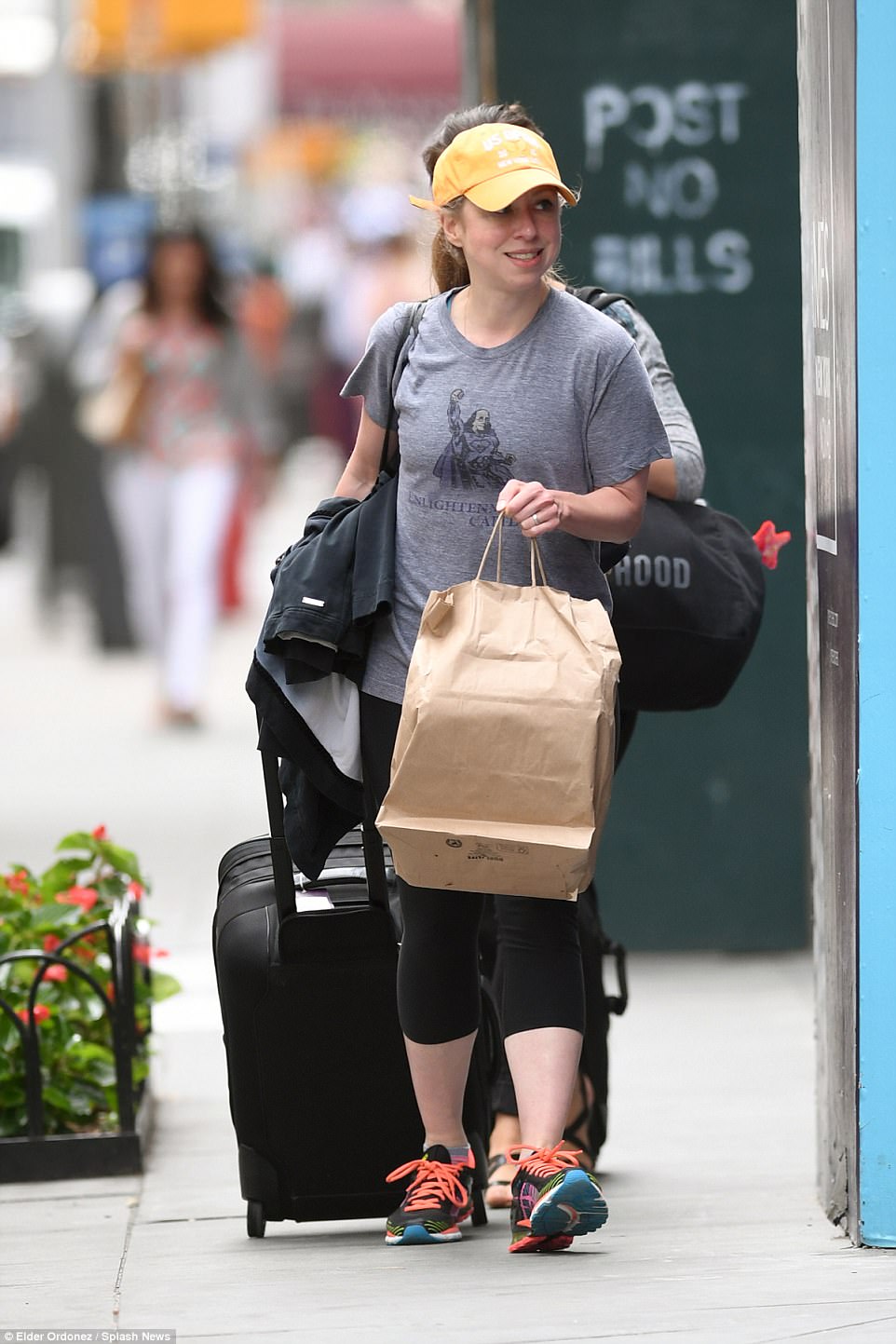 Is Chelsea heading to Italy? Rumor has it that Chelsea Clinton is one of the 400 guests attending the wedding. She was spotted in New York City Tuesday morning with her hands full of luggage 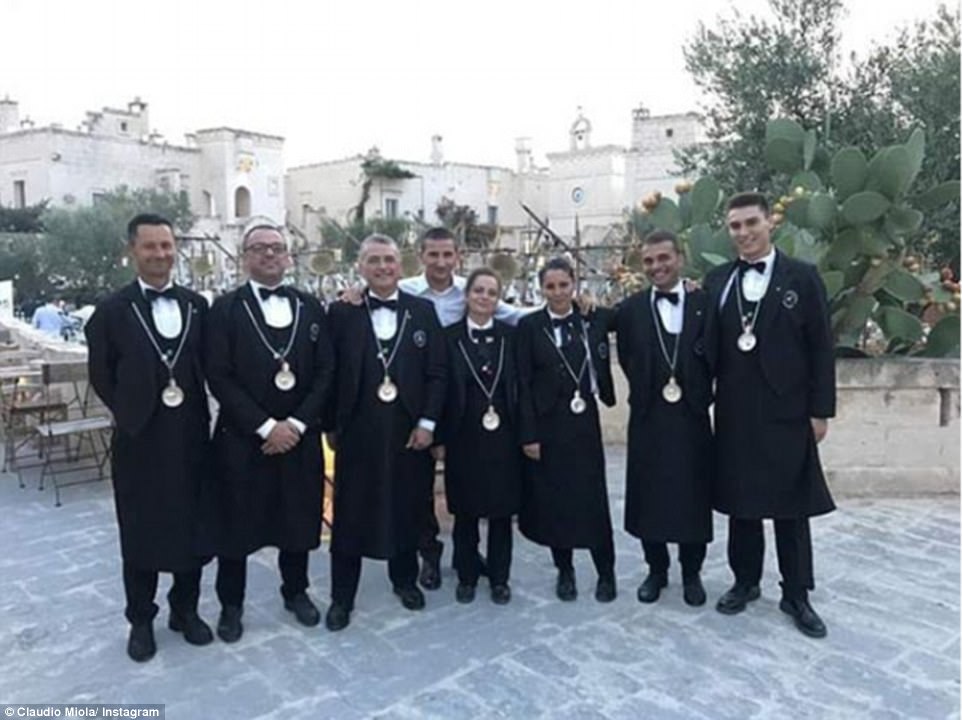 People who work at the hotel posed for a photo next to the elaborate dining space, with the photo captioned ‘Sutton Wedding’ 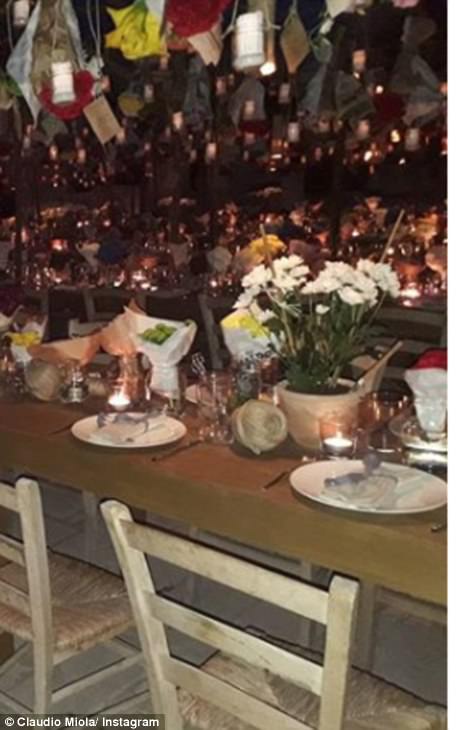 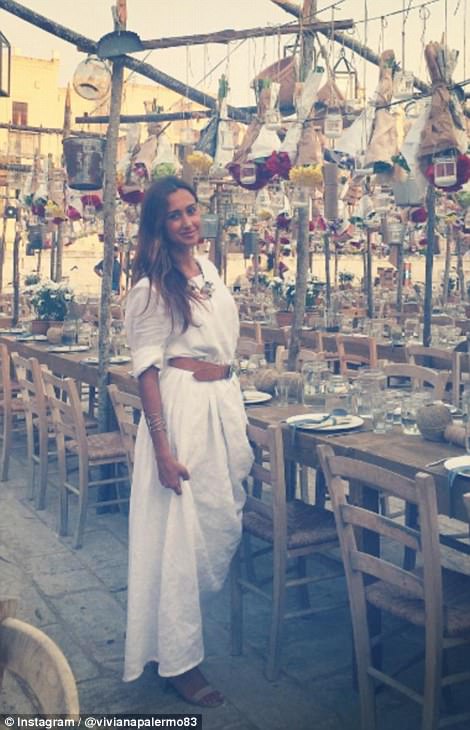 Guests were surrounded by yellow, red and white flowers as they dined at the resort. There were reportedly eight tons flowers from Holland shipped in for the wedding 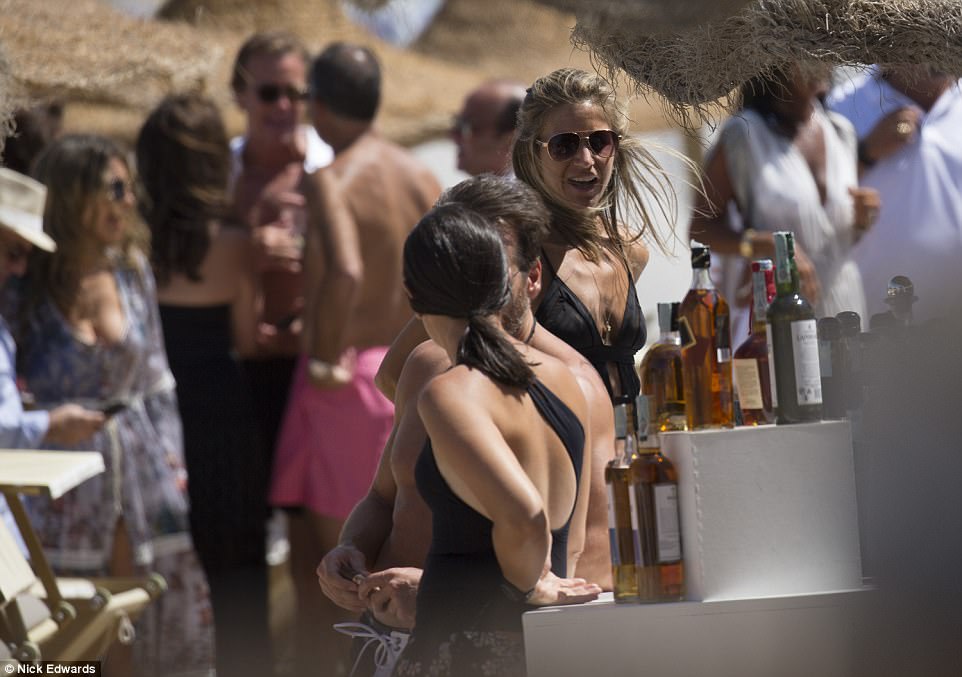 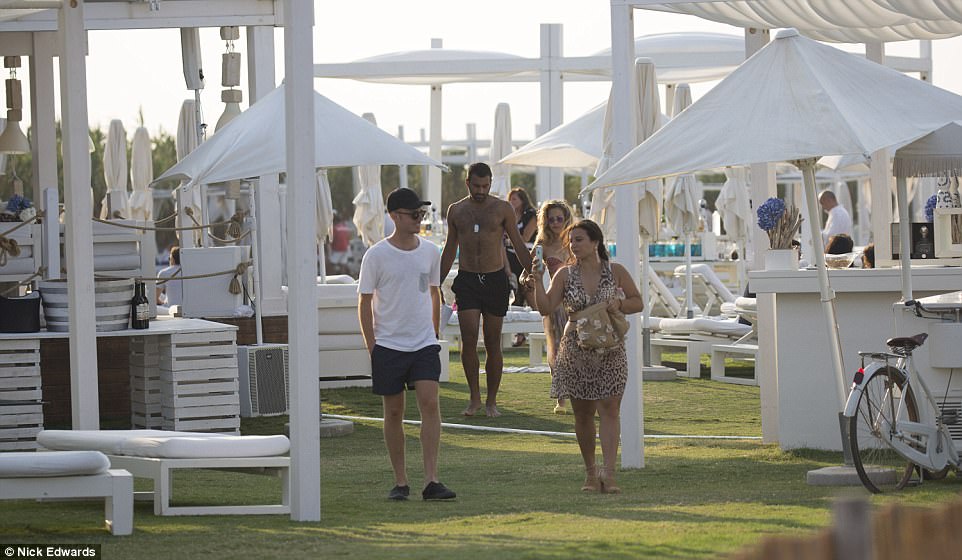 VIPs are expected to attend the lavish wedding, including former New York Mayor Michael Bloomberg. Jeff Sutton made his fortune by renting out Manhattan real estate 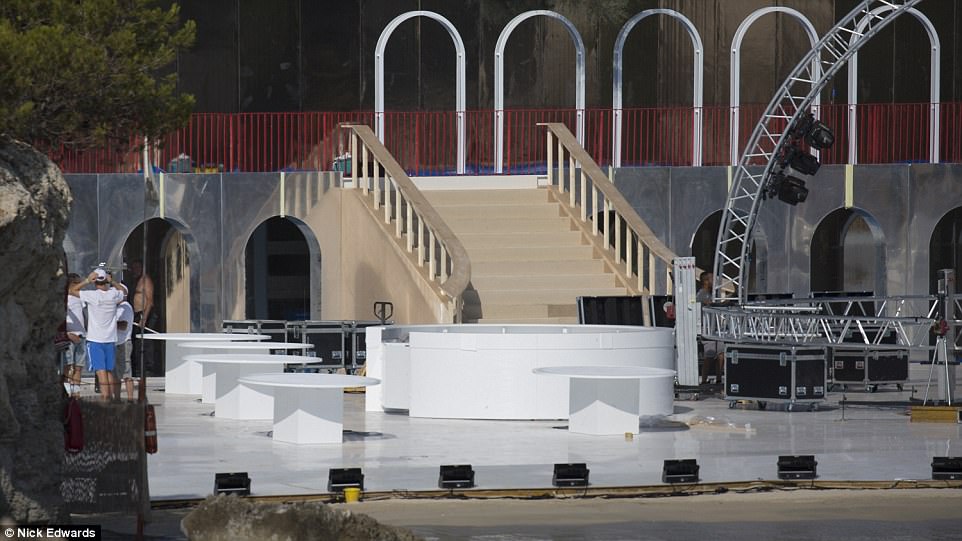 The newlyweds are expected to descend down this newly built staircase to join guests after the ceremony. Construction crews were on site building the stage and dance floor on Tuesday 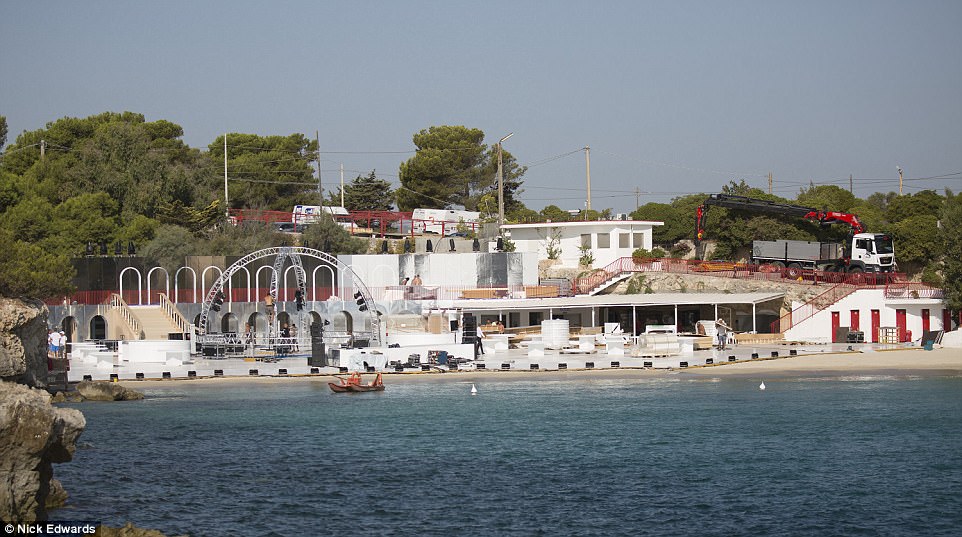 But while the $25 million will make the Sutton wedding among the most expensive, the eight figure sum laid out pales into comparison with the tens of millions spent by Russian oil tycoon Ilkhom Shokirova for his daughter, Madina Shokirova’s 2016 wedding.

Guests for the Sutton wedding have been accommodated at the exclusive Borgano Egnazia resort in the town of Fasano where rooms cost over $500 a night.

All 63 rooms and villas on the 600-acre resort have been block booked for guests who are said to include former New York Mayor Michael Bloomberg. Chelsea Clinton is also rumored to be a wedding guest and was spotted in New York City Tuesday morning walking through the streets with her hands full of luggage.

The guests were flown to Italy on charter jets with the first 150 arriving at Bari airport on a 757 from Newark, New Jersey.

A chartered United Airlines 747 brought the bride and groom and their families at a cost of over $300,000 for the 10-hour transatlantic flight. 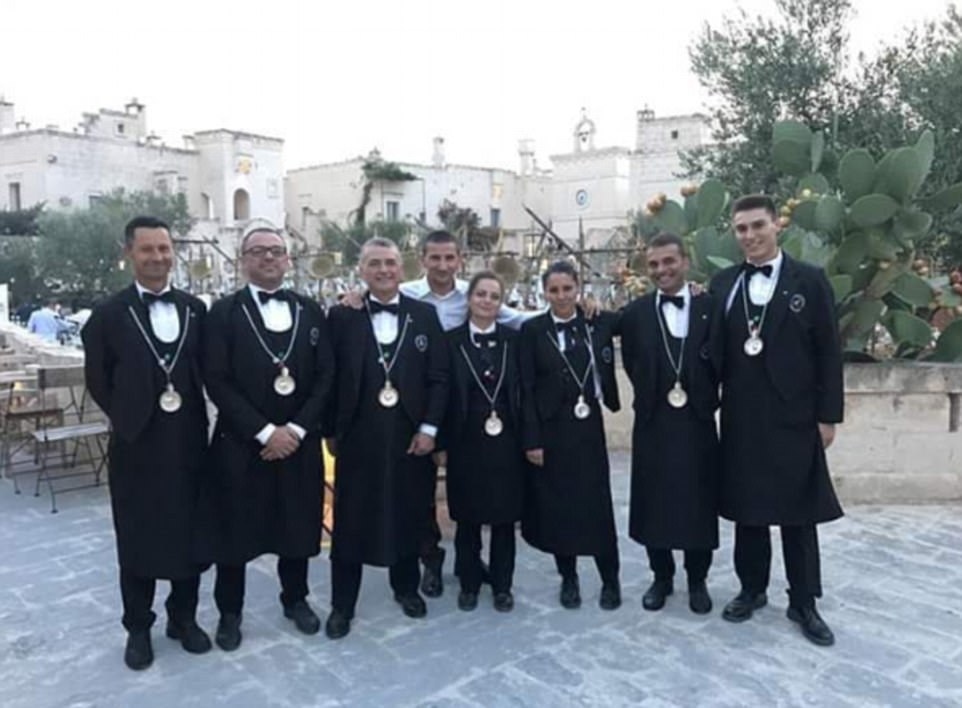 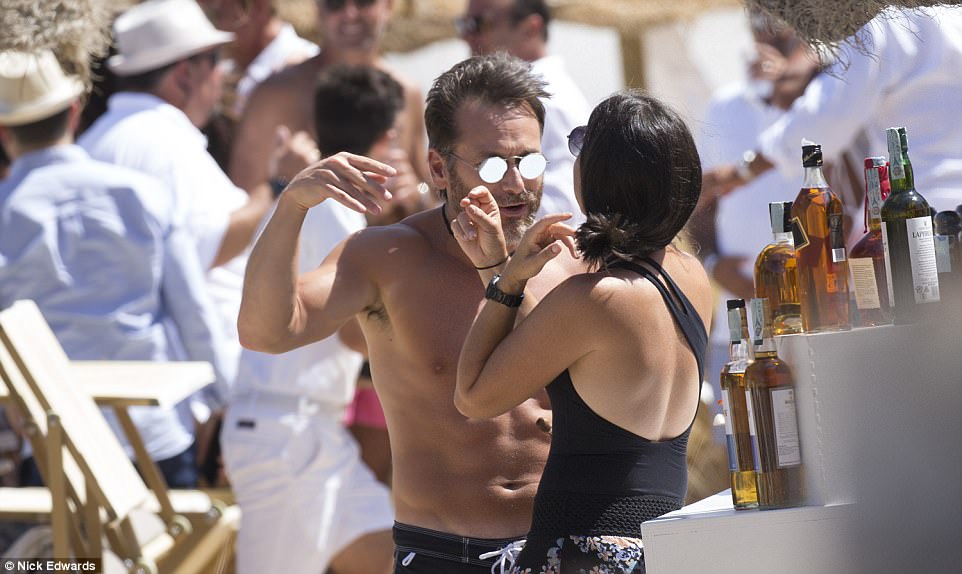 Guests were flown over on chartered jumbo jets which costs upwards of $30,000 per flight hour. A 757, which made two trips across the Atlantic, is around $25,000 per hour 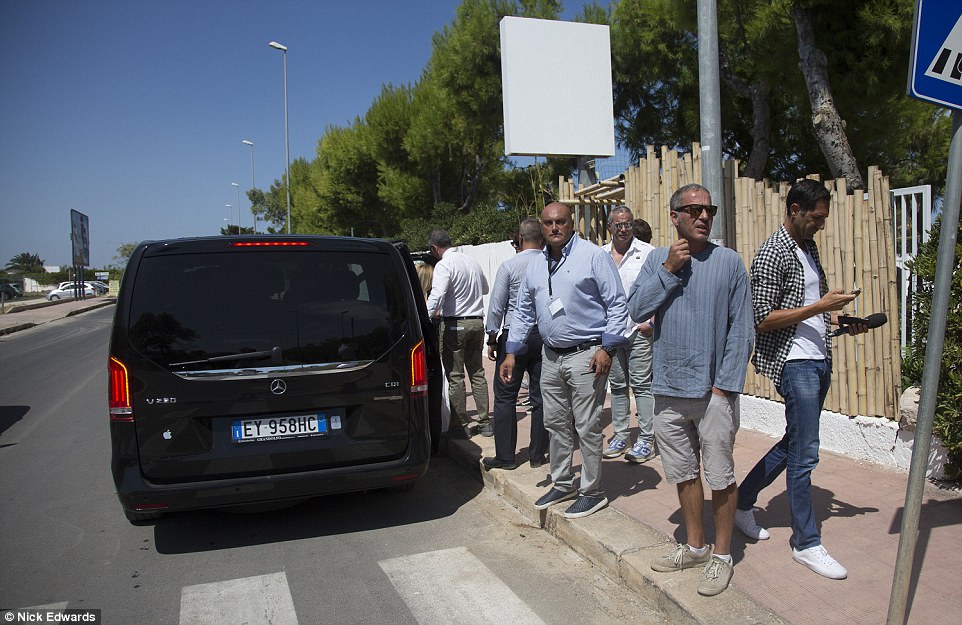 At least 50 cars have been hired for the week to drive the wedding guests around the city. A driver told DailyMail.com they are on standby waiting for guests 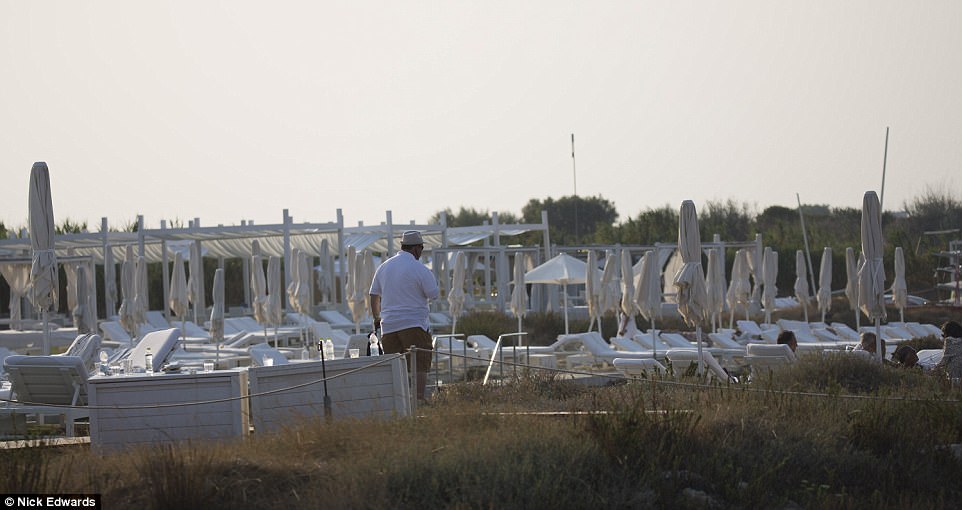 Since arriving in Italy, guests have been treated to a series of private parties and will have another beach day Wednesday

With return trips at the end of the week the final bill for the flights is estimated to be close to $5 million.

Since arriving in Italy the guests have been treated to a series of beach parties and ferried around in a fleet of luxury cars.

One driver told DailyMail.com over 50 vehicles have been hired for the entire week and put at the disposal of the guests.

The driver said: ‘It is crazy. Every van that can carry up to six people has been hired in the area and up to Bari. We are all on standby to take the guests to the beach or wherever they want to go.’

Staff working at the pre-wedding events all wear brown polo shirts embroidered with the initials ‘R’ and ‘E’ from the first names of the couple. 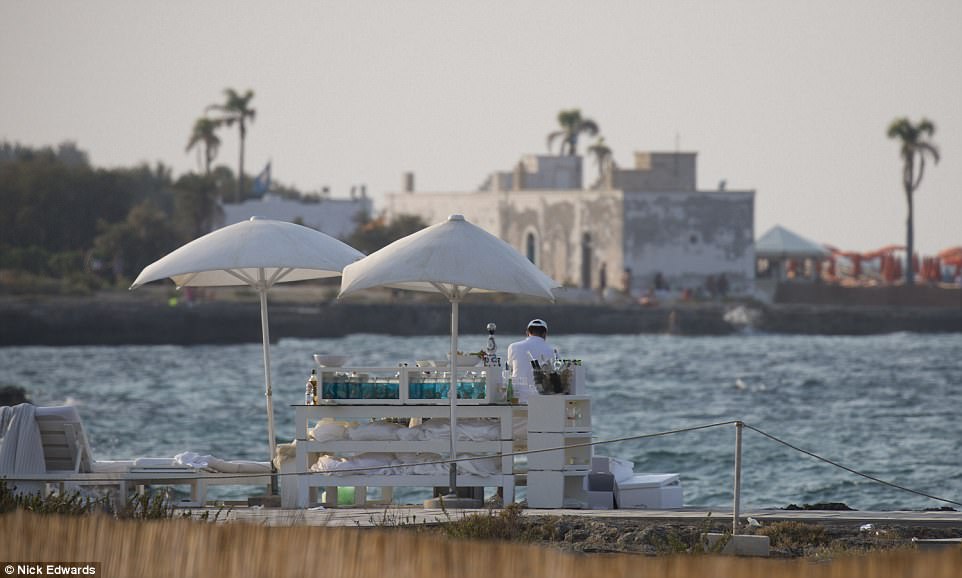 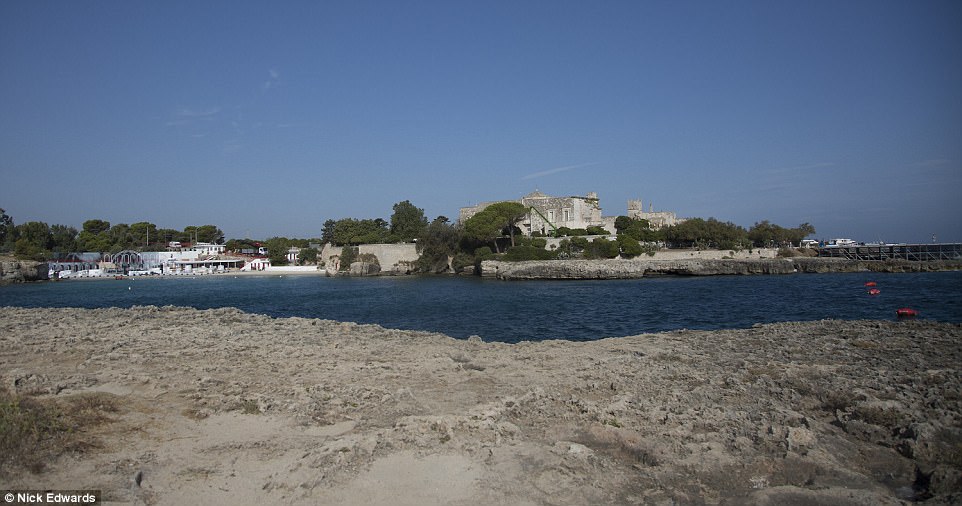 Police said an exclusion zone around the beach where the ceremony is being held. Security guards are already patrolling the area where guests are partying to ward off wedding crashers 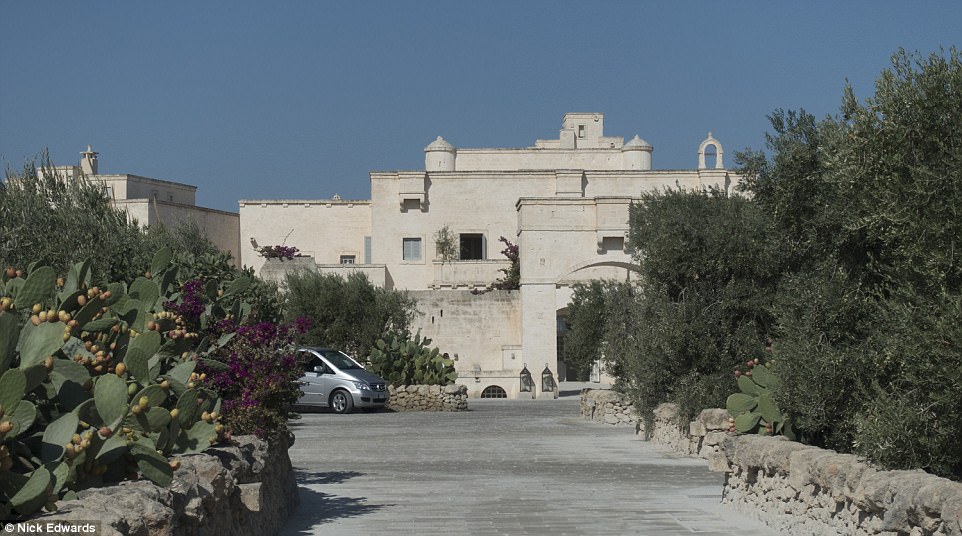 All 63 rooms and villas on the 600-acre Borgo Egnazia Resort (pictured) have been rented out for wedding guests. Rooms at the exclusive resort cost more than $500 per night

Each has signed a confidentiality clause not to talk about the wedding or the guests.

Security teams from New York have been flown over to keep out unwanted guests and attempt to prevent photographers from capturing photos of the couple on their big day.

Police in the nearby town of Monopoli said an exclusion zone around the beach where the ceremony is being held would be put in place.

Guests were ferried to the Bamboo beach club on Tuesday to relax by the turquoise waters of the Adriatic Sea under white cabanas. A further beach day is planned for Wednesday before the couple tie the knot.

With a $3.6 billion fortune, self-made billionaire Sutton and his wife Rachel have spared no expense in creating a special day for their daughter.

The couple have four other children and have a $22 million home set on the Jersey shore but call Gravesend in Brooklyn where Sutton’s grandparents first settled their main home. 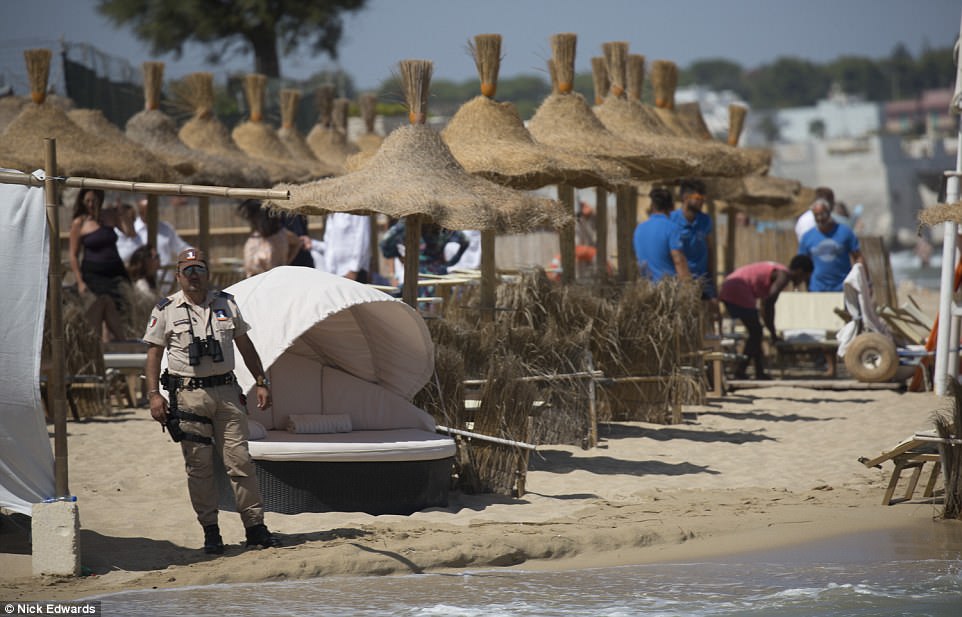 Private security guarded the pre-wedding party of Renee Sutton and Eliot Cohen at The Lido Bambu near Monopoli in southern Italy. The wedding will be attended by 400 guests and will cost an estimated $25 million 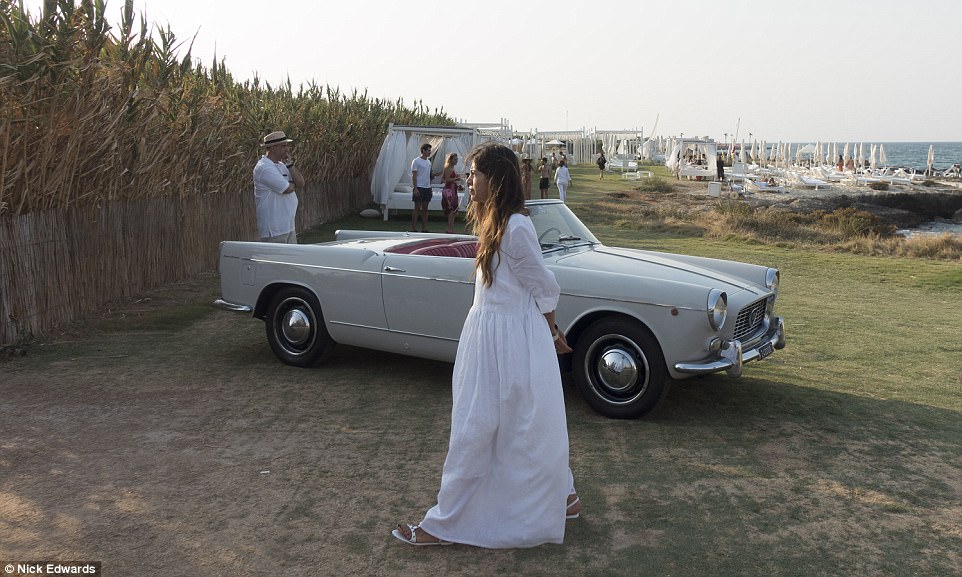 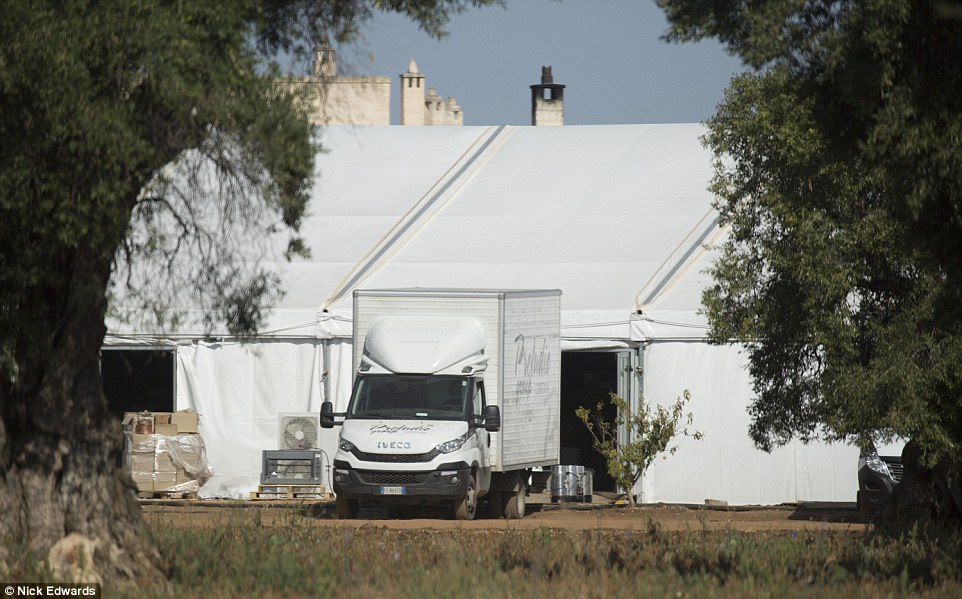 Outside of the venue, a non-stop procession of trucks brought building materials while refrigerated trucks carried food

Sutton has made his fortune from property in Manhattan where colleagues know him as ‘The King of Retail.’

His company Wharton Properties owns some of the most expensive real estate on 5th Avenue with a host of designer names leasing his stores.

He is landlord to Armani, Escada, Dolce and Gabbana and Abercrombie and Fitch while last year in partnership with developers SL Green he signed sports giant Nike to a new $700m lease 15 year for their 5th Avenue store.

His company owns 125 properties in Manhattan and last year paid $1.78 billion for the Crown Building on 5th Avenue – often referred to as the gold coast of retail.

Sutton, who began his property career as a retail broker, is not known for flashy shows of extravagance preferring to keep a low profile.

He and his wife are active within Jewish charity organizations but he is rarely seen at red carpet events.