Inside the Etihad training centre, where crew ‘fly’ planes and experience VERY realistic crash simulations in a mock-up cabin, complete with passenger screams and burning seats

Before cabin crew and pilots take charge of a plane full of passengers, they’ve already experienced what it’s like when things go badly wrong – and been trained to deal with it – as a new travel site video reveals with footage that will be especially reassuring for nervous flyers.

Nicky Kelvin, from The Points Guy UK, was invited to spend a day at the Etihad Aviation Training centre in Abu Dhabi, where he filmed his experiences at the controls of a 787 Dreamliner simulator and inside a mock-up cabin set to replicate the effects of a nose-gear collapse – complete with passenger screams – and a fire, complete with actual flames.

The first part of the footage shows Nicky being coached in the multi-million-dollar 787 simulator – one of several housed in a huge bay – by Italian captain Luca.

Nicky Kelvin, from The Points Guy UK, was invited to spend a day at the Etihad Aviation Training centre in Abu Dhabi. He’s pictured here with his simulator trainer Captain Luca

He shows him the flight deck version of ‘Google Maps’, how the aircraft can fly at night thanks to a hi-tech heads-up display and reveals that on transatlantic New York-London flights, the Northern Lights can sometimes be seen over Greenland.

Nicky guides the aircraft safely into Heathrow, which he told MailOnline Travel was thrilling.

He said: ‘Being coached to fly into my home airport of London Heathrow was an indescribable experience. Despite having made this journey hundreds of times as a passenger, it was such a thrill to experience this upfront, especially in such a high-tech simulator used by professional pilots.’ 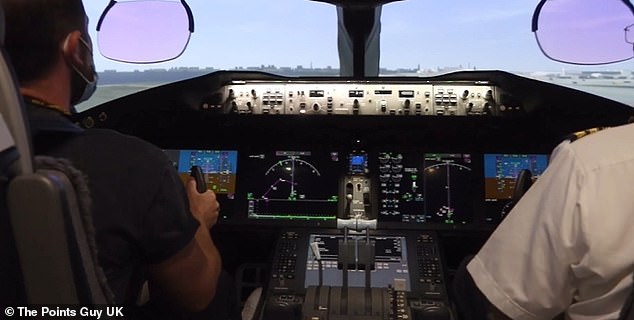 Next, we see the giant pool cabin crew use for water-landing scenarios before Nicky is buckled into the cabin simulator’s economy section (it also has premium economy and business-class portions) for mid-air emergency training.

The cabin has been programmed for a nose-gear collapse scenario and Nicky looks genuinely alarmed as the cabin begins to shake violently and passenger screams are piped through the speaker system.

Etihad also shows him how it trains crew to deal with onboard fires by filling the cabin with smoke and giving them real flames on a seat to put out.

The giant pool cabin crew use for water-landing scenarios

Nicky also gets to open a door and activate the emergency slide, which was ‘a huge delight’.

‘I have a particular fascination with aircraft doors,’ he explained.

He added: ‘I was very surprised at exactly how realistic the training scenarios are for cabin crew. We are all used to seeing hydraulic simulators for pilots that allow the unit to move around convincingly, but it is far less well known that some training facilities have similar set-ups for cabin crew. 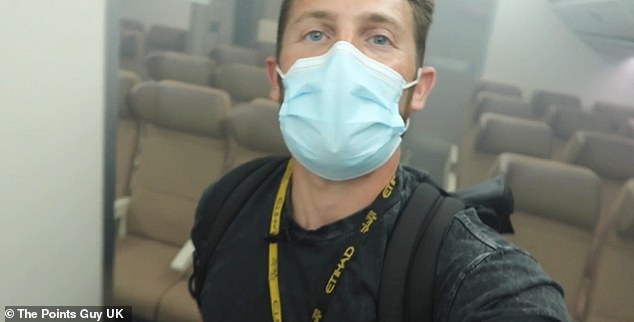 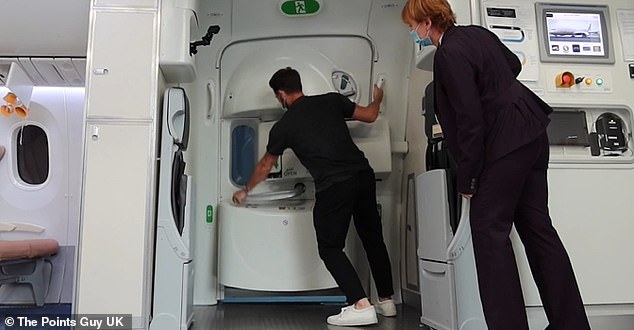 Nicky gets to open a door and activate the emergency slide, which was ‘a huge delight’ 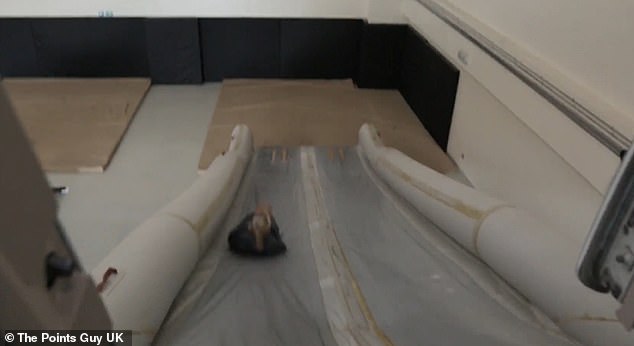 ‘The use of hydraulics produces very realistic movements for training scenarios, for example for simulating take-offs, turbulence and various emergency situations.

‘For nervous fliers, I think this experience would be very positive and educational.

‘On the one hand, you are exposed to a number of emergency situations which you may think would create more anxiety around flying. However, actually experiencing such scenarios alongside expertly-trained pilots and cabin crew who are there to keep passengers safe could in fact raise awareness of the procedures in place to protect passengers – which could definitely help to put minds at ease.’

For the full-length video click here. For more information on travel tips and tricks, sign up to The Points Guy UK.